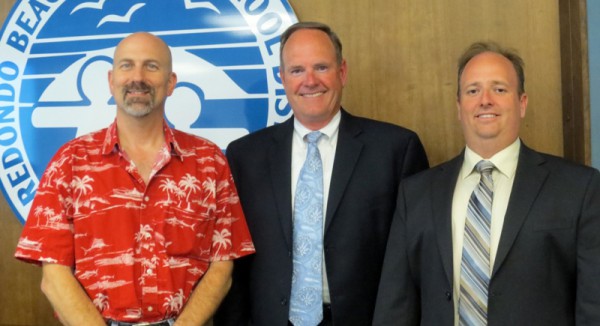 The mood was lighter at this week’s Board of Education meeting than it was two weeks ago, when the community bid three termed-out board members a teary farewell.

Tuesday night, their replacements – Brad Serkin, Michael Christensen, and Brad Waller, who were all elected unopposed – took their respective oaths.

Brad Serkin, a lifetime South Bay resident who moved to Redondo Beach in 2000, enters the fray fresh from a four-year stint as president and treasurer of the Redondo Beach Educational Foundation.

As a father of two Alta Vista Elementary School students, he wants to do his part to ensure the Redondo Beach school district continues on a path to “excellence” and continues to produce the economic drivers of the future.

“I believe it is all of our responsibilities as community members to ensure that our children are well prepared to be good citizens and prepare them for the jobs of tomorrow,” he said.

The school board is recovering from a “tough” period, “economically and otherwise,” Serkin said, and he wants to help steer it to stable ground.

He wants to increase reserves and meticulously manage expenditures made possible by recent bond measures.

Serkin also wants to restore programs and staffing that have been cut for lack of funding and add language programs to school curricula. He lists his concerns as class sizing issues and the aging state of some classroom equipment.

He has a B.A. in marketing and runs a business specializing in medical advocacy, wellness, and insurance brokerage.

Michael Christensen, a 14-year Redondo Beach resident, said he felt called to the board out of a respect and appreciation for the quality of the district it serves.

Two of his sons graduated from Mira Costa and one from Redondo Union, and currently he has three kids in Redondo schools (daughters in 7th and 5th grade, and a son in 3rd grade).

Serving as a member and chairman of the Measure C Citizen’s Bond Oversight Committee and watching his son Evan take the position of the Board’s student member heightened Christensen’s appreciation for the Board of Education and the role it plays.

To test the bureaucratic waters, he did a one-month program at Harvard’s Kennedy School of Government for executives in state and local government, and he pulled papers shortly thereafter.

By trade, Christensen is a (third-generation) civil engineer. Presently he is deputy executive director for development and second-in-command at the City of Los Angeles Harbor Department (Port of Los Angeles).

“Nothing is fundamentally broken in the district, and the team I’ll be moving into is a good one,” he said. “However, there are a few things that need attention. First and foremost, we need to get our reserves built back up to an acceptable level… That is the first order of business. Also, California’s method of school finance is fundamentally broken, and I hope to be able to make some contribution toward moving it in the right direction.”

Brad Waller also has engineering experience, having worked for 13 years as a system engineer in the aerospace industry. His job had him “doing things [he] can’t talk about” in advanced infrared technology, project management, and marketing, he said.

Currently he works in the online affiliate marketing industry, targeting the mobile market, and has built nearly 200 apps for iOS and Android.

Waller has a daughter at Redondo Union, and has been volunteering on parent committees and with the PTA since she was in pre-school.

“I have been very active as a board member in multiple levels of the PTA, and I see becoming a member of the school board as an extension of that work,” he said.

“Our district is not well positioned with regard to the governor’s formula for funding and if changes are not made we could have issues, the biggest one being that SoCal ROC [Southern California Regional Occupation Center] is not funded at all in the new budget,” he said.

“The solution is one of awareness and action. The new educational standards will be a struggle for everyone – not just our district. Taking time to learn about the standards and getting training for the teachers will be needed. We need to make sure our teachers can understand and teach to the new standards.”

She noted that the Local Control Funding Formula, as outlined in the proposed state budget, provides zero funding for increased enrollment, despite the fact that Redondo is a “destination district” with high appeal.

The proposed budget, she said, redistributes funding to the detriment of some districts and benefit of others. It is not, she said, an “adequacy model.” The Department of Finance has yet to release accurate figures as to the extent of the impact redistribution will have for Redondo.

“All of these things are very disconcerting as we hear more and more detail,” Redella said.

Redella added that Assemblyman Al Muratsuchi has been a “huge advocate” for the school district, and encouraged the public to contact him directly with their concerns about a potential loss of funding for the district.

Tuesday night, the Board of Education adopted a resolution that supports the localization of decision-making powers, but only if the model “provides adequate base funding for all districts [and] includes funding for growth and evenly distributed COLA [cost of living adjustment].”