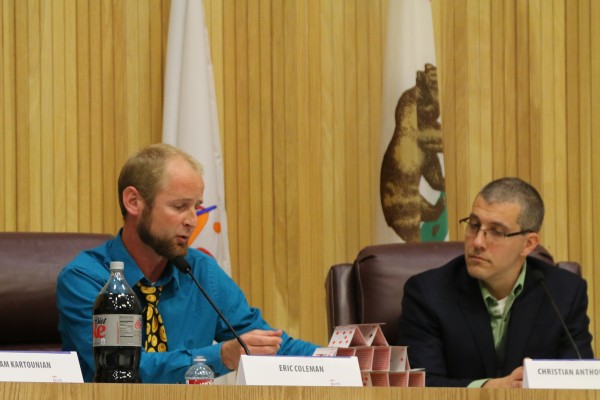 Nafissi made it clear multiple times that she was one of two candidates – along with Coleman – opposed to Measure B, saying that she just doesn’t believe that AES “has our best interests at heart.”

“I didn’t move to Redondo because it’s a tourist destination,” she said. “I moved here because I love the water, and I want my kids in beautiful schools.”

One of Nafissi’s chief concerns with the redevelopment of the waterfront is rent concerns – namely, that locally-owned businesses would be priced out of the mixed-use space that’s been proposed.

“I’m the daughter of a small business owner, and we could never afford rent on this waterfront,” she said, emphasizing that she believes that the Harbor Village proposal is overdeveloped, and needs to be reconsidered.

Marchese touted her history within the city, emphasizing her 22-year residency and that she’ll “continue to be here” after the race is over. She also noted that, due to her retirement, she’d be available to meet with constituents and serve the city every day, implying that her competitors with businesses and young families would not be able to offer the same level of service.

She also took the opportunity to take her public stance on Measure B, confirming that she was, indeed, in favor of it – with a caveat. “I am no friend of AES,” she said loudly, counter to her usually sedate nature. “I was personally sued by AES,” she said, referring to her work as a proponent of 2009’s Measure UU, which would have removed AES’ Utility Users’ Tax exemption and caused the company “to pay their fair share,” as Marchese put it. “I am not their friend, but do support Measure B.”

Kartounian repeated talking points that he’s promoted throughout his campaign — that he’s the only job creator in the race, and, as such, his experience as a small business owner in the South Bay Galleria stands him apart from the crowd — before reiterating his support of Measure B.

“AES has owned the land for 100 years, and we’ve had discussion on table for 25 years; this opens door to move progress forward,” he said. “I’m for the initiative of the zoning, not the building. We have ample time for discussion to play out. Redondo’s been fighting for X amount of years – this needs to pass, and Redondo needs to move forward.”

The day’s biggest crowd reactions were given to political spoiler Eric Coleman. With copies of the U.S. Constitution and a bag of props (including a two-liter bottle of Diet Coke, Groucho Marx gag glasses and a literal house of cards that failed to fall apart as planned) in tow, Coleman was Redondo’s political Carrot Top – though his responses were not jokes, so much as they were cuts at the system as he sees it.

“What have serious politicians done recently?” he asked during his closing remarks. “I’ll keep them honest; while I may appear a clown, the system is a joke and elections are a circus. By the time an issue comes up for discussion, it’s already been decided,” he said. “You’ve got one chance. Vote Coleman. Put this shit-show to bed once and for all.”

Horvath had the unenviable position of following Coleman after most questions, but was often unrattled. “I’m behind everything that’s happened so far,” he said with regards to redevelopment along the waterfront. “We’ve selected a great partner to work with us in the harbor, and I’m excited to see what they’re coming up with. I’m looking forward to retaining Redondo Beach culture there.” ER