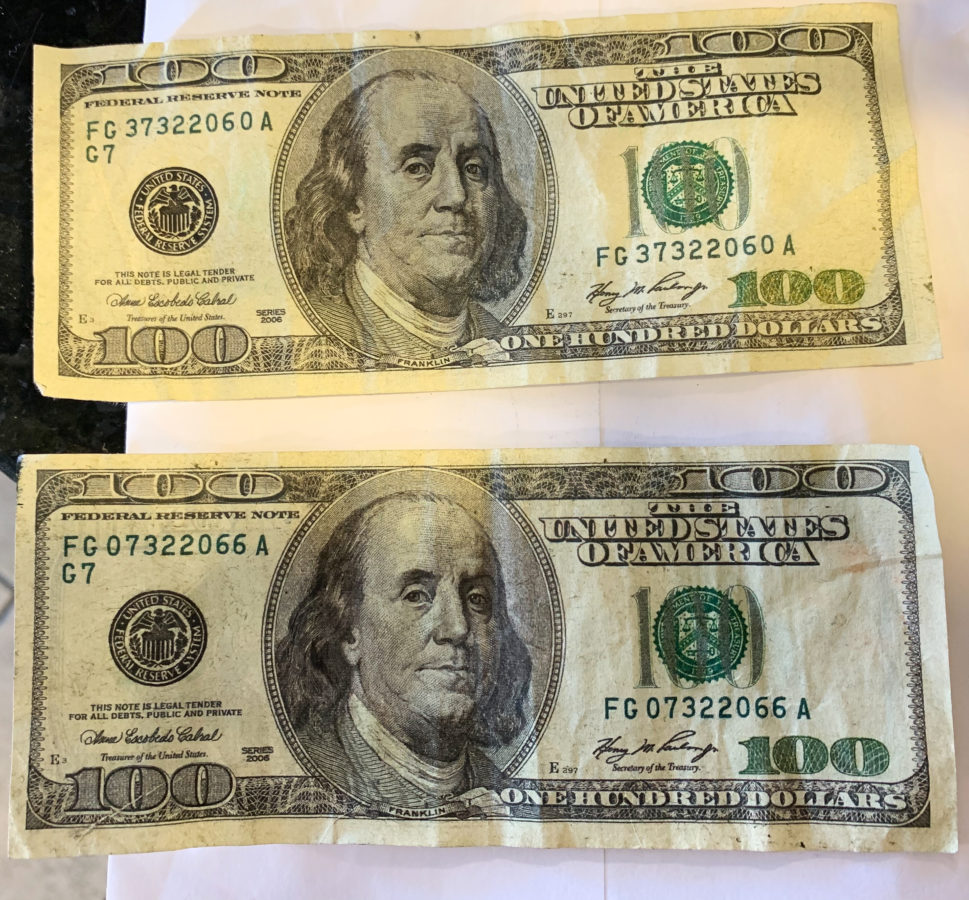 These two counterfeit $100 bills were used to purchase Girl Scouts cookies from Scouts at a North Redondo Beach market  this past weekend. Photo courtesy Tammy Saunt

Redondo Beach police are investigating a counterfeit bill scam that took advantage of a Girl Scout cookie booth outside of a North Redondo grocery store on Sunday night.

Tammy Saunt could tell immediately that something wasn’t right with the $100 bill handed to her by a member of her Girl Scout troop.

A pair of girls from Troop 4595 were sitting at a table, set up outside the Vons store at 4001 Inglewood Avenue on Feb. 23, when they were approached by a woman carrying a dog. The woman bought eight boxes of cookies from the girls, paying with a $100 bill, then walked inside the store. When she came out, she bought two more boxes, paying with a second $100.

“My daughter was so excited — ‘Oh, she just gave us two hundreds!’ Then I saw them,” Saunt said. At first glance, they looked normal. But when she touched them, she knew — they just didn’t feel like cash. “Who gave them to you?” she asked.

A woman, the girls said. She was really nice, but she had no teeth.

Saunt couldn’t fault the girls. This is the one time of year that they sell cookies and kids these days don’t normally handle paper money. “Everything is online, or through apps, or gift cards from their grandparents, and that’s how they pay for stuff,” Saunt said. She also wasn’t hovering over them; they’re high-schoolers, and she wanted them to have freedom over the booth.

The next day, Saunt went to the police, where she found a bit of hope; since the woman went into the store, there might be video footage, and that she might be a “known entity” to the cops. But it’s not enough to go on quite yet, said RBPD Lt. Jeff Mendence. “As we get more info, maybe we’ll be able to put something out to the public, but we’re not quite there yet,” Mendence said. Police are hopeful that security footage, if not from the grocery store than from a nearby camera, will have picked up the suspected scammer.