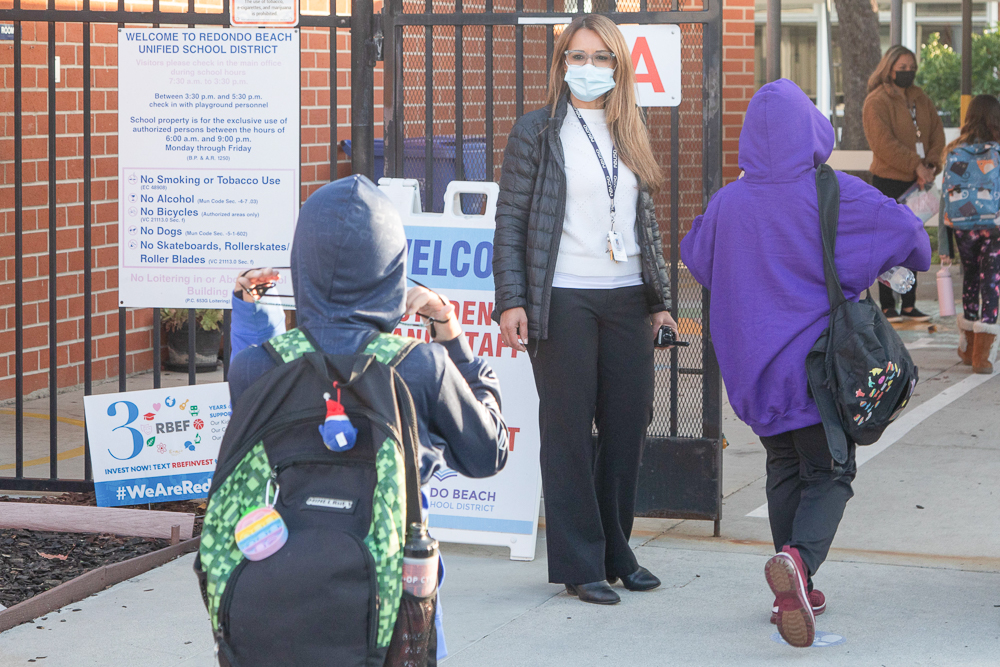 Birney Elementary principal Mira Baskaran reminds students to put on their masks as they arrive at school Tuesday morning. Photo by JP Cordero

On Monday, the first day Redondo Unified School District students returned from the holiday break, 35 district teachers were absent. On Tuesday, 62 teachers were absent, or 12 percent of the faculty. During normal times, 24 absent teachers would be a high number, said Nikki Wesley, RBUSD Assistant Superintendent of Human Resources.

Student absence percentages were even higher than that of teachers. According to Annette Alpern, Deputy Superintendent of Administrative Services, 20 percent of students were absent on Monday and 19 percent Tuesday.

By comparison, she said, “With flu season, typically in January we see absences of six percent.”

The unusually high number of teacher and student absences is attributed to the highly contagious Omicron variant.

On Sunday, the day before classes  resumed, 17 percent of the 430 teachers and students who took antigen tests, administered by the Beach Cities Health District, tested positive. The tests were given on a first come-first serve basis, in the Redondo Union High School parking. (Antigen tests indicate whether or not the COVID-19 virus is present in the user’s nose, at the time the test is administered.)

The tests were all that BCHD, and the school district were able to acquire before Monday’s resumption of classes.

At the end of this week, one week later than hoped for, all Redondo Beach Unified School District students will receive rapid antigen test kits.

In a letter to Redondo Beach Unified School District parents last week, Superintendent Steven Keller asked that students returning to school be tested beforehand. But there was a problem with the request. Most local pharmacies were out of home COVID-19 tests, and the Redondo school district had yet to receive test kits promised to schools by Governor Newsom nearly a month ago.

“Many people were able to find testing. Some were not,” Keller said in an interview Tuesday.

The State tests arrived Monday, and will be distributed to Redondo’s nearly 10,000 students Thursday and Friday of this week.

Each student will receive two tests. Parents are being asked to test their students on Sunday, Jan. 9, and to use the second test at their discretion.

Keller, while acknowledging teacher absences were high, said the situation is “manageable.”

“That said, it’s only Tuesday. As I’ve learned with COVID, knock on wood,” he added.

In response to the Omicron variant, the district has tightened its COVID-19 protocols.

Mandatory testing is being required of students who have had close contact with COVID-19 patients, regardless of vaccination status. Masking on campus (except while eating) is now required outdoors, as well as still inside buildings.

Sports teams that have an outbreak will have their games and practices suspended for a week.

Keller noted that most outbreaks at schools across L.A. County have involved sports teams.

“Athletics is the piece we’re all trying to tighten,” he said. “But the classroom piece has been very impressive.”

Distribution of the two test kits to every student is being coordinated by the Redondo Beach PTA Council.

“We’re looking at a drive-through model at the high school,” Keller said. “This is all evolving.”

Elementary school parents will likely be asked to pick up the tests from their school offices. The tests are a one-time offering from the state.

“Omicron is omnipresent,” Keller said. “What’s different now, from when students left for break in December, is that the virus is more prevalent in the community. And people are clearly taking it more seriously.”

“We’ll be looking for the positive cases to decline,” Keller said. “But I know it’s not going to be this week or next.”

“Our entire learning community wants to do whatever it takes to keep our schools open,” he added. ER