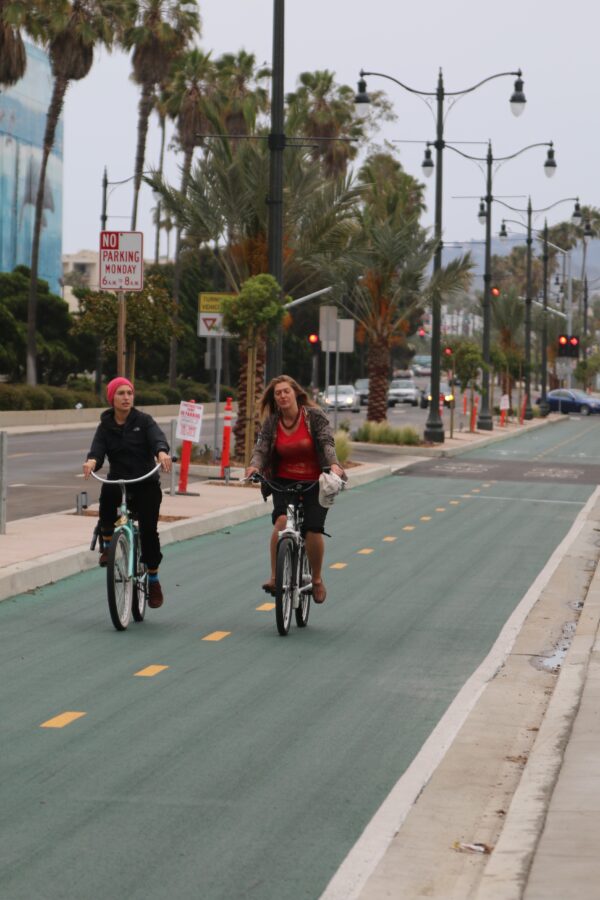 Two cyclists ride down the new bike path along Harbor Drive. The grand opening for the Harbor/Herondo Gateway project is June 13. Photo 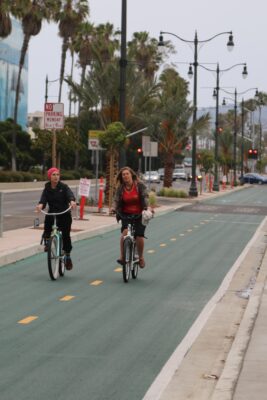 Two cyclists ride down the new bike path along Harbor Drive. The grand opening for the Harbor/Herondo Gateway project is June 13. Photo

While the city still works to iron out the wrinkles between bikes, pedestrians and motor vehicles, new complaints have grown among residents and commuters using roads along the project. Their issue is traffic and whether or not the project’s supposed livability increases are nullified by drive-time congestion.

The Gateway project, which was approved in July 2014, costing the city approximately $5 million. The centerpiece is the two-lane cycle track along Harbor Drive, among the first Class I bike paths in the South Bay, with additional benefits coming from the city’s first reverse-angle parking area along Herondo Street and construction of a parkette at the corner of Harbor and Herondo. Street resurfacing, lighting and signal improvements were also included in the project.

According to Beach Cities Health District CEO Susan Burden, the project will have a significant positive impact on the health of residents and businesses.

“Instead of trying to force people to change their weight,” Burden said, “this changes the makeup of a community, allowing people to naturally have better physical health. It’s built around creating a healthy street environment.”

“We’re trying to balance the use of public property among drivers, pedestrians and bicycles,” Jones said, noting that now all receive an equal share of the public infrastructure.

“It used to be that if you wanted to walk down Harbor Drive, you’d have vehicles at the curb line next to you,” Jones said. “You can create a place that’s more conducive to a healthy lifestyle and a better way to get around — a whole new flow of bicycle and pedestrian traffic.”

But in the weeks leading up to the opening of the project, traffic snarls have dammed the streets at peak commuting hours.

Nearby residents seem to agree, as Facebook photos and posts of traffic snarls along Herondo generate upwards of 30 responses, nearly all of which echo disappointment.

Two lanes were eliminated from Herondo Street in each direction, allowing for the striping of reverse-angle parking — a concept that, to this point, is a rarity Los Angeles County and is intended both create a safer street and fit more spaces

“It’s another form of parallel parking,” Jones said, adding with a laugh, “Hopefully people passed that when they got their driver’s license.”

Burden said that she understands the conflict. “It’s natural human resistance to change,” she said. The biggest benefit, she feels, is the increased field of vision that drivers get as they pull out of the spot, allowing for them to see approaching vehicles and cyclists, rather than backing blindly into the street.

Jones noted that the project won’t be completely finished until the Grand Opening. “We’re fine-tuning striping, setting signage regulations — signals that are not turned on are being tweaked,” he said, noting that recent traffic backups were caused by as-yet-uninstalled loop detectors. “It’s a work-in-progress — we’ll continue to refine and adjust.”

Festivities begin at 10 a.m. on June 13, and will include a ribbon cutting with officials from Redondo Beach and Hermosa Beach, as well as a community bike ride, an expo featuring local businesses, and the unveiling of the parkette public art project. ER