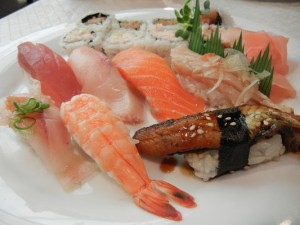 When you’re a fan of a restaurant that you think has their food and service just perfect, it’s disheartening to drive by and see a banner announcing a change of name and a new menu. While the change will always be portrayed as an improvement, you’re wary since you didn’t think it needed improving in the first place.

I was a fan of Ichiriki restaurant in Redondo and particularly enjoyed their sushi, so when I saw that the name had changed to Bistro Miyoda and the specialty to Chinese food; I figured that the experience I enjoyed was lost forever. Instead, I was surprised to find that the Japanese restaurant I liked had added a new section to the menu, and what looked like a takeover was really a merger.

I was even more interested when I found that Chef Miyoda’s specialty was not traditional Chinese food, but Chinese food as it is served in Tokyo the spicing and presentation on traditional dishes adjusted to suit Japanese tastes. He has also brought in some dishes that are neither Japanese nor Chinese, but rely on original ideas. Over several visits, I have found the cuisine thought-provoking and enjoyable, even when I like the traditional version of the dish better.

The original items are well represented among the appetizers and salads, and they’re almost all successful. Ichirikki has always had stir-fried spinach available as a starter, generally prepared with a light sesame sauce. The new version pairs the spinach with garlic, salt, and both black pepper and chili pepper, and it has a fresh-tasting spiciness that isn’t quite like any Japanese food I’ve had before. The same is true of the cilantro chicken in hot mustard and miso sauce; I think of miso as light and slightly sweet, and I had never thought of pairing it with mustard and cilantro in a salad. It works very well, the peppery cilantro and spicy mustard flavours soothed but not completely tamed by the coolness of miso, lettuce, and cucumber.

The success of the kitchen isn’t always about this flavor balance, as proved by an outstanding salad of eringi mushrooms and bacon. Eringi mushrooms are the odd-looking Asian mushrooms with a fat stem, and their meaty texture and delicate flavor makes them a natural in salads. Pairing them with bacon and greens was a natural idea; the original touch here is an anchovy-based dressing that is similar to a mild Caesar dressing, but with miso used instead of Parmesan cheese. I’m a great fan of traditional Caesar salads, and this Asian re-imagination of my favorite was inspired.

Another starter that worked well was the plum shrimp, which uses a slightly sour traditional Japanese plum preserve called umeboshi instead of fresh plums. I’ve had shrimp with plums before and found it excessively sweet, but the umeboshi gets the balance just right.

The list of Chinese entrées is very short, especially when compared with the vast selection at a typical Chinese restaurant. The thirteen items include chow mein, Kung Pao chicken, and sweet and sour pork, and seem unremarkable except for the note that all noodles used are handmade in-house by the chef. The flavor balance on all of them is closer to Cantonese than any authentic Chinese region, and having tried almost all of them I can verify that there are more hits than misses.

While the noodle dishes are all very good, my favourite was the Tan-Tan noodles. This dish is generally made with a very spicy sauce of vinegar, sesame oil, green onion, and both black and chili peppers. The version here uses much less chilli and vinegar and is served in soup rather than fried an almost complete departure from the usual. I sometimes order these noodles in Chinese restaurants when I feel a cold coming on and want a very spicy antidote. I wouldn’t do that here, but if I wanted a very flavorful noodle soup with a hint of vinegary and oniony sharpness, this is the place.

The Ma-Po tofu, traditionally a very spicy Szechuan dish with pork and tofu in a spicy black bean sauce, also works well in a moderated form, but the lightly peppery Kung Pao chicken needed an extra shot of spice to really live up to the name. The dish that provoked the most comment, however, was the crispy hot shrimp in a noodle basket. Rather than being fried in a Chinese-style batter, which is often heavy, the shrimp had been fried tempura-style before being tossed with a lightly spicy and sweet sauce. It was a genuine fusion of Chinese and Japanese ideas, and very successful. The noodle basket was the only disappointment; rather than the woven chow mein-type noodles that I’ve had in Hong Kong and in some LA restaurants, it was a sheet of thin dough formed into the kind of edible cup often used at Mexican restaurants for tostadas. It wasn’t bad, but it wasn’t as good as the Hong Kong version.

Of course, at most meals since the restaurant added Chef Miyoda’s creations; we have had a mixture of the traditional Japanese and Chinese-Japanese food. It’s handy both for the days when we feel like variety and when we can’t decide what kind of food we want, Chinese or Japanese.  Combining the two in one restaurant – and having them both done well – is an act that very few places can manage, but they’re doing it right here.