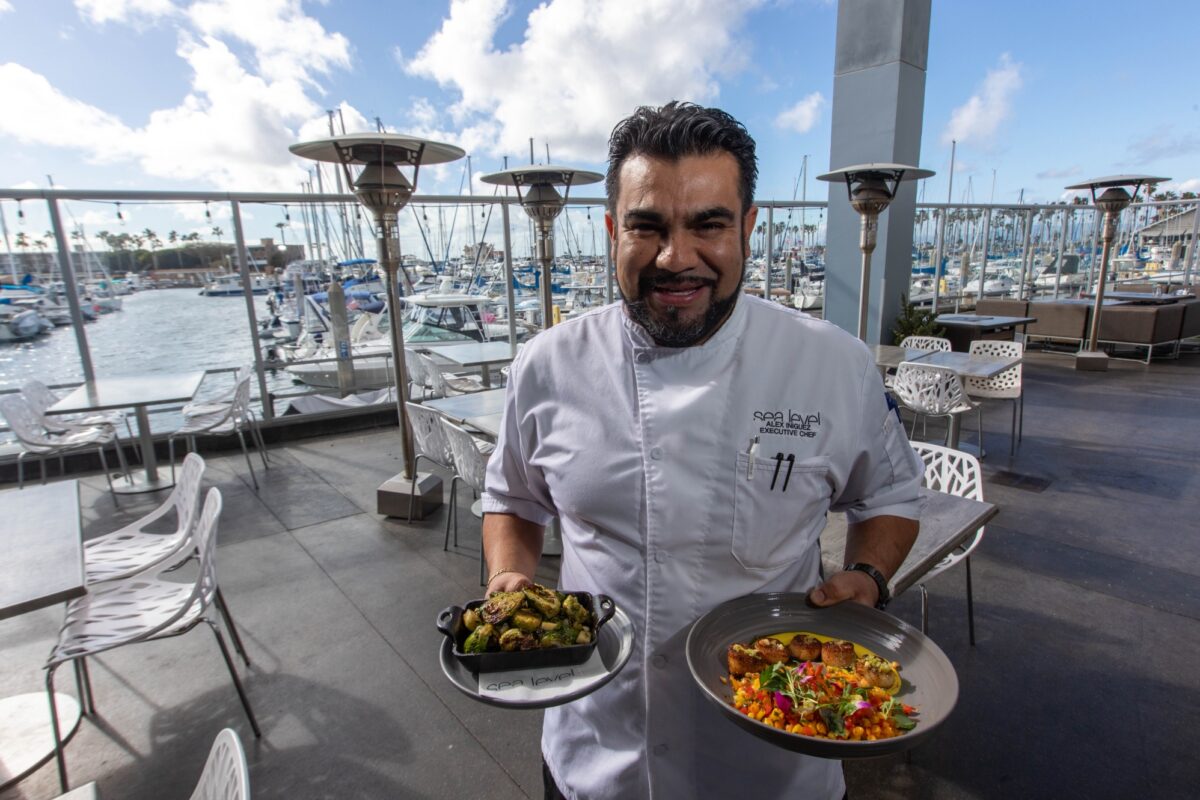 The restaurant at Shade Redondo has an understated creativity

Steely Dan once sang “Hot licks and rhetoric/Don’t count much for nothing,” in one of the most cynical songs ever written by those world-weary lyricists. That duo had the very skills they disparaged in that little ditty, but made their point about the difference between mere flash and well considered ideas.

It’s relevant to all art forms, including cooking. Some restaurants open with a faddish gimmick that is the equivalent of a weird earworm or hot solo in the middle of a formulaic song, but they rarely last. The places that endure are more likely to be the culinary equivalent of an ensemble piece in which every part is interesting and well-played.

I’ll stop with the music metaphors now except to say that what encouraged them to come to mind was dinner at Sea Level in Redondo with companions who included a professional musician. He tends to describe things using tuneful terminology, and it’s apparently contagious. We were out for a celebratory dinner, and I wanted someplace with understated elegance that wasn’t too loud, so we could talk, and that’s the place that popped into my head. The tables overlooking the marina fit the situation nicely, and wind blockers and a heater made the space toasty despite a blustery breeze.

I visited Sea Level shortly after they opened in 2016, and have been back several times since. The food always had plenty of ideas, though execution was sometimes uneven, and the restaurant has had several different executive chefs who brought their own ideas. After the departure of Craig Hopson to run Strand House last year, management brought in Alex Iniquez, who had previously run the kitchen at Rock ‘n Fish in Manhattan Beach. That restaurant balances a classic steak and seafood house style with more modern ideas, and I was curious about whether Iniquez would import that aesthetic or be freed to pursue more avant garde ideas.

Chef Iniquez hasn’t made a big move either way so far, but has slimmed down the menu, and added a few dishes while keeping old favorites.

We decided to start by sharing fried chicken bites with sesame-chili sauce, rockfish ceviche, and brussels sprouts with black pepper and maple caramel. I was dubious about that last item because both maple and caramel are flavors that can be cloying and overwhelming, but they were in balance here. The sprouts themselves were lightly cooked rather than caramelized, the glaze applied lightly to complement the cabbage flavor of the sprouts. Some chunks of green apple, an ingredient not listed in the description, added natural fruit overtones, completing things nicely. It’s a preparation I haven’t seen before and was a hit with everyone at the table. 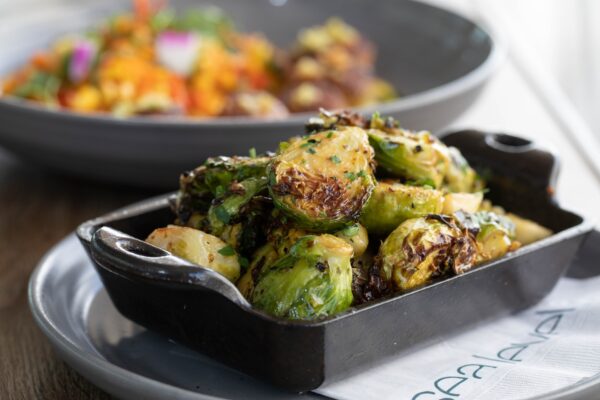 The fried chicken was a version everybody has seen before, battered boneless nuggets with a little red pepper in the batter, but with a drizzle of sesame oil and sesame seeds, a bit of fried parsley topping it for texture, and a chili aioli on the side for dipping. It’s an elevated bar snack, and put us in the mood for cocktails, but more about that later.

The ceviche was made with rockfish marinated with lemon, onion, Persian cucumber, and radish, with avocado on the side and a topping of sprouts, and just a hint of jalapeno. We had expected it to be spicy because that pepper was listed in the ingredients, but it was just a minor overtone in the flavor. That’s fine with us because it worked just as it was, but if you ordered this expecting a big peppery kick you might be disappointed.

The bar here can turn out the classics, but while our friends enjoyed beers my wife and I were interested in trying original drinks. The Lower Manhattan, which mixed a gentian amaro and sassafras bitters with bourbon, and the Doctor’s Order were very good, but their rum old fashioned variant was surprisingly dull. The menu mentioned cider-brown sugar syrup and cinnamon, but those flavors left little impression in an otherwise straightforward drink.

For dinner we selected lobster mac and cheese, seared scallops over a corn and vegetable mix, pan-roasted sea bass, and a New York strip steak with a side of scalloped potatoes. The steak was tender and the perfect medium-rare I requested, accented with truffle butter, finishing salt, and pepper, but the surprise on the plate was their version of scalloped potato. It was a dense little hockey puck of cheesy potato that had been crisped on all sides, and I think they should make it an available side item with other dishes. That isn’t to slight the sides on some of the other plates here, though, as the succotash-like corn, red and yellow pepper, and shallot mix that came with the scallops was pretty fine too. Put those two sides on a plate, perhaps with a dab of the vegetable risotto that was beneath the sea bass, and you’d have a fine vegetarian entrée. Everyone at our table were omnivores so enjoyed the meat and seafood too, the scallops lightly seared so they were tender right to the edge, and the fish perfectly roasted for a crisp skin. 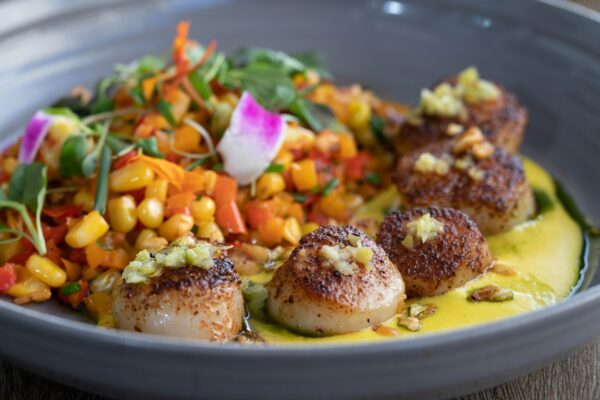 The lobster mac and cheese didn’t look pretty thanks to blackening on the breadcrumb crust, but it tasted as rich and cheesy as anyone could ask for. The lobster was in small bits rather than chunks, but you got some in every bite, and a sprinkling of green herbs added aromatics that could be scented from some distance away. I tend to think of mac and cheese as a kid’s dish, but this made grown-ups happy too.

We had to try two desserts, the pot au creme that has been on the menu since opening day and the crème brulee. (We had wanted their key lime pie, but they were out.) Neither dessert was conceptually unusual, both were satisfying, and I find it hard to imagine that I’ll ever come here without sharing the pot of chocolate because they do it so well.

Dinner at Sea Level is priced about as you’d expect for an elegant dinner with an ocean view – we spent about $55 per person, food only, about another hundred for drinks. It’s a bit above my price range for an everyday meal, but great for a special occasion. The food is consistently good, service attentive, and the environment is relaxing. I’d compare it to a harmony if I didn’t say earlier that I was done with the music metaphors.