Roadside BBQ on an unlikely road 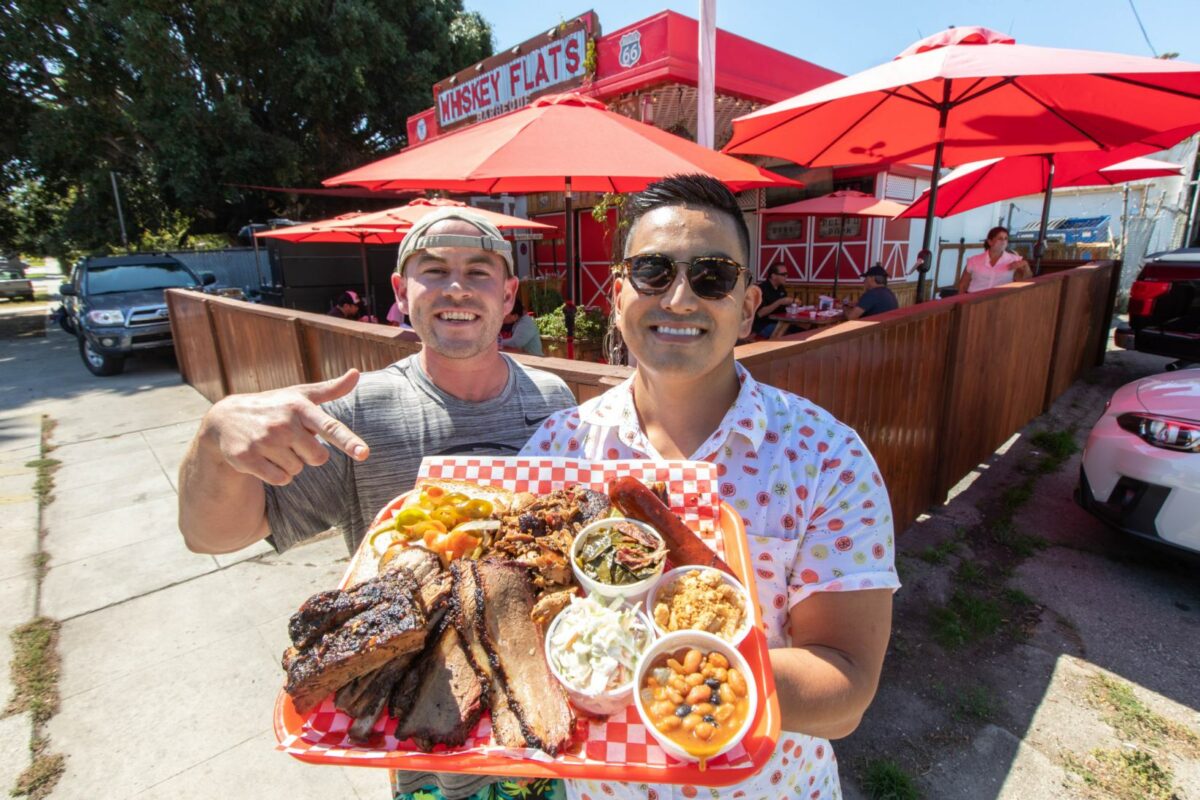 Whiskey Flats BBQ, in a quiet residential area, has the flavor of the open plains

A roadside bbq restaurant can be found in the most unusual places and have been having a moment in greater Los Angeles, sprouting up in vacant lots, parking lots next to bars, and anyplace else that has room for a smoker. These operations are helped by the fact that nobody expects fancy surroundings when chowing down on barbecue – a few picnic tables, lots of napkins, and some shade are all that are expected.

The people who scout out locations probably seek places with lots of foot and automotive traffic, so the sight of that barrel smoker and scent of caramelized meat might waft to passers-by and lure them to stop in. This makes the location of Whiskey Flats Barbecue in San Pedro an oddity, because it’s on a residential part of Pacific Avenue, between Cabrillo Beach and Angel’s Gate Park. The former gas station has been painted to look vaguely like a country farmhouse, and the outdoor patio has comfortable furniture decorated with gingham print beneath bright red canopies. The cashier’s station looks like an old-fashioned wagon, and the space is endearingly kitschy. There is undoubtedly a tiny percentage of the passers-by that they’d get if located on a highway, but anybody who gets a good look at this place will want to investigate it.

I was most interested in seeing their smoker, which is behind a fence and visible only through a narrow gap. The people running that smoker are evidently used to ‘que fanatics who want to see the operation, and when they saw me craning my neck around the fence they invited me back to see it. They have a huge barrel smoker, at least eight feet long, and they lifted the lid so I could see the racks of ribs. Barbecue on the grill isn’t pretty to most people, the exterior black with caramelized fat and spices, but to someone who knows what they’re looking at it’s beautiful. 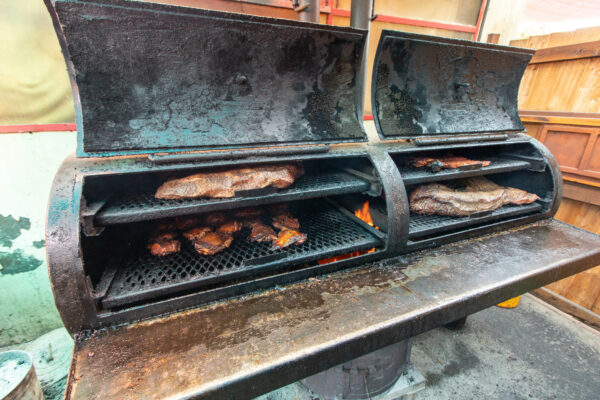 The menu changes a bit from week to week, but seems to always have the staples – ribs, chicken, brisket, and pulled pork. On the day I visited their meats also included rib tips, which is apparently rare, as well as hot links (sometimes housemade, but store-bought the day I was there, so I didn’t order them). Their sides were the standards, at least the day I was there: cole slaw, baked beans, and collard greens. They also had chili that day, which I had to try because I find that irresistible, and cornbread because I find that enticing, too.

I was meeting some friends for a concert and had volunteered to bring dinner, so I picked up rib tips, brisket, and pulled pork to go. We opened the containers full of food and gazed at beautiful, beautiful barbecue. Did I say that barbecue isn’t pretty? Yes, but that’s before it’s cut so you can admire the way that dark crust gives way to the pink “smoke ring” that shows where the meat had been infused with flavor from the slow cooking. Within that was the color of meat at perfect doneness, dark tan in the case of the brisket, variegated browns in the pulled pork, pink shading to white on the rib tips. 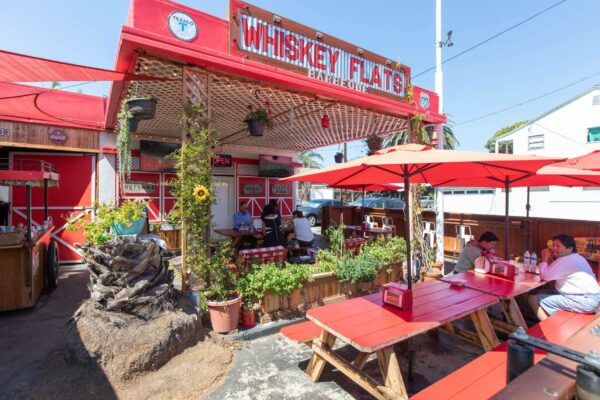 Rib tips are a bit of work to eat – they’re the ends of ribs that are often cut off in restaurants because they have pieces of cartilage running through them, so require you to gnaw the meat from the pieces. They’re worth the work because this meat is marbled with fat that melts out in the slow cooking process, making it more tender and flavorful than rib meat. Think of the ribs you usually enjoy, but a bit richer and more flavorful. The meat was cooked Texas style, with indirect heat and a spice rub but no sauce, and it was served dry with a peppery but not explosively hot sauce on the side just the way they do at the Iron Works Barbecue in Austin (one of my favorite places in the barbecue world).

Brisket is another meat that is notoriously tough if cooked quickly, but tender when slow cooked. The version here actually fell apart from its own weight when I picked it up with a fork, flaking along the grain the way a perfectly done piece of fish does. Any pitmaster in Texas would have been proud to call it their own. The pulled pork was in the same league, a little chewier the way good carnitas can be, but with a smoky depth you don’t get in carnitas. 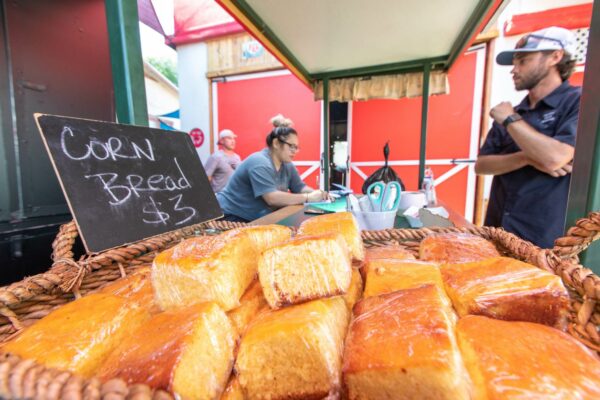 The meats were all served over a thick slice of bread that sopped up the juices, plus some housemade spicy pickled carrots, onions, peppers, and cucumbers. They came with a choice of two sides, and since there were only three we got to try all of them. The collard greens had an intense broth and spicy kick, and the beans were decent but not exceptional. The standout was the cole slaw, which had a nice flavor of celery seed and apple.

The chili had a little more kick than the beans and had a nice portion of brisket stirred in before it was topped with cheese, and some sour cream on the side. I didn’t think it needed the sour cream because while it had nice flavors of cumin and subtle pepperiness, it wasn’t particularly hot. The only disappointment was the cornbread, which was cakelike and somewhat sweet. Some people may like it for that reason, but I like cornbread with more corn flavor and a coarser texture. We ate it, but it’s the only thing we had that I wouldn’t order again.

Unlike many places, Whiskey Flats Barbecue changes up their meats regularly, and when fact checking this article I found that today’s special was pastrami. That was almost enough to make me leave the keyboard to run and get some, because the rest of the meats here are so good. This place is not particularly convenient for me, but I expect to be there a lot anyway because they offer such remarkable quality. Next time I’ll sit beneath one of their umbrellas and enjoy their nice patio and the scent downwind from that smoker.