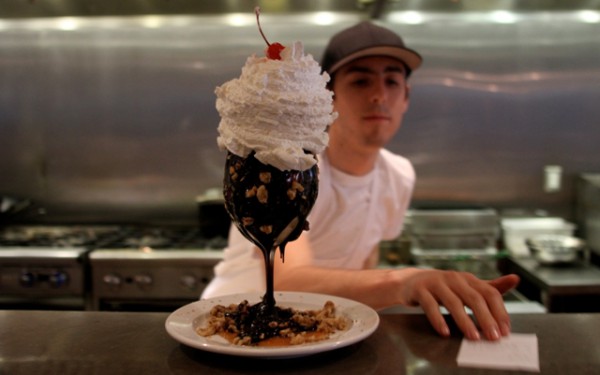 I rarely review chain restaurants because they rarely do anything interesting. I do make exceptions when I notice that a corporate chain is doing something ambitious, which is why Sammy’s Woodfired Pizza is getting a turn in the spotlight this week.

I had seen their sign as I drove by Plaza El Segundo, and each time it evoked the image of pizzas rising by the firelight, the dough and toppings lightly perfumed with wood smoke. Such a siren call can’t be resisted indefinitely, so three of us stopped in for a meal. The first thing we noticed was that this place offers a lot more than pizzas – most of the menu is devoted to salads, pastas, and grilled items, with Italian food distinctly in the minority. We ordered a “Mediterranean pomegranate salad,” a cup of shrimp and roast corn chowder, duck tacos, and an Italian sausage and mushroom pizza. This was intended to be a light meal, because the tacos and chowder are both from the starter menu, but we quickly discovered that the portions are abundant.

The salad was slightly misnamed – though the tart and fruity pomegranate vinaigrette dressing is a major component, it is far from the only thing going on here. The salad of romaine, cucumber, tomato, mint, onion, and parsley had a dusting of sumac powder, a condiment usually used in the Middle East. Sumac has a lemony, slightly smoky flavor, and this was a major partner along with the mint and dressing. I asked our server about the sumac and he mentioned that the owner of the restaurant is Lebanese and likes to experiment with adding a few of his cultural influences. It works quite well here, but I would recommend that it be listed as an ingredient because some people taste sumac as tannic or powerfully sour.

The salad also had chips of cracker bread, a nice alternative from croutons, but after we ate a few we noticed that they seemed quite salty. This was the first instance of a recurring problem at Sammy’s, which we noticed yet again when the chowder arrived. Our initial impression was very positive, of vibrant flavors of roasted corn and shrimp in a creamy, lightly peppery soup, but after eating half a bowl, the person who ordered it was draining her water glass.

There was no such problem with the duck, a nicely presented array of six small tacos in crisp corn shells topped with cabbage, tomato, cotija cheese, and cilantro. The duck had been fried into a rich-tasting carnitas, not spicy but flavorful, and it was well matched with a guacamole that had a slight edge due to a bit of soy or ponzu. There was salt in there, but it was well balanced. The Italian sausage pizza with mushrooms and oregano pizza was a winner too. I had ordered it with a whole wheat crust, and it had the slight nutty flavor you get from whole wheat but was light and fluffy, the bottom just crisp instead of doughy. It even had that hint of woodsmoke I had hoped for. The sauce was spicy with strong herbal flavors, the basil pungent and aromatic, all bold flavors for a chain restaurant.

The meal had been so successful that we decided to return a few days later with another couple. We decided to start with an order of crispy fried tofu, duck quesadilla, and a tabouli and quinoa salad. The tofu had been breaded with a seasoned breading, which meant it tasted like… well, seasoned breading with a wisp of mild cheese flavor. Since fresh tofu doesn’t taste like anything much, that was no surprise. It was enjoyable on a textural level – that crisp breading surrounded a cloudlike softness, and if you dipped it in the ginger sauce or ponzu, you got another dimension to the flavor. The duck quesadilla was similar to the tacos we had on the previous visit except for the drizzle of balsamic vinegar, a condiment I would not have thought would pair well with guacamole, but does.

As for the salad, it tasted more of minty, citrusy tabouli than quinoa, which was a slight disappointment. I had been hoping the nutty flavor of the Incan grain would be an equal partner in the mix, but the mint and citrus took over. Measured as a standard tabouli with a big fresh taste of herbs and citrus it was just fine, but it wasn’t what we expected.

My wife had ordered the lobster mac and cheese, I had a New York pizza, and our companions selected a shrimp risotto and grilled lamb chops. The risotto arrived first, and as soon as the person who ordered it tried a bite, she grabbed her water glass. The saltiness problem was back, and it was just as powerful in the green beans that accompanied the lamb chop. The manager happened to drop by just about then to ask how our food was, and we asked him to try a taste of both. He agreed that they were salty, but said that if people don’t like it that way, they should ask for it to be made with less salt that usual. This can certainly be done on a repeat visit, but since we hadn’t been warned, we hadn’t done it. He ordered another side of green beans and offered the woman who had ordered risotto a choice of anything else on the menu. She decided on oak roasted chicken breast with a side of asparagus, which arrived quickly and was subtly flavored and very well done.

In fact, the spicing was so well done on the things that weren’t oversalted. The lamb chops were excellent, and the mac and cheese was a creamy comfort food delight. As for my pizza, it was salty but not so much so that I sent it back – there were good flavors in the pepperoni, salami, sausage, and mushrooms, and the strongly herbed tomato sauce had bold flavors that I liked.

The manager offered a free dessert due to the problems, and we selected a thin crust pizza topped with manouri sheep milk cheese, oregano, and honey. The crust was almost a flaky pastry, the cheese and honey a delightful pairing of natural flavors, the oregano used sparingly to just give a breath of herbs. It was yet another reminder that when the salt shaker is not deployed, this kitchen can be formidable.

Our meals at Sammy’s Woodfired Pizza & Grill were thought provoking; what to make of a restaurant that is most successful at their most ambitious items but shows a pattern of over-salting simple ones? Had it been a problem on only one visit we could have dismissed it as a fluke, but we experienced it days apart, and the manager’s comments seemed to confirm that this is a pattern. As things are, we may well return to explore the menu further, now that we know to ask that the kitchen’s enthusiasm for sodium chloride be restrained.