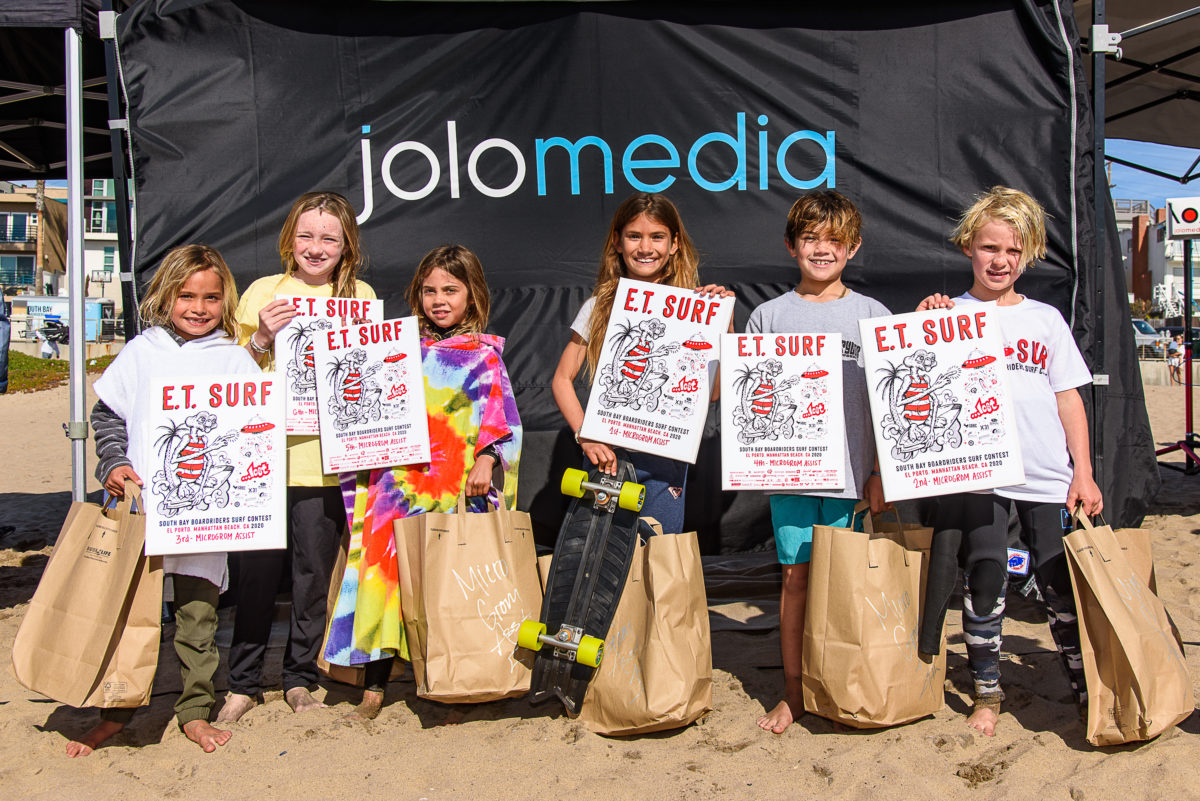 The South Bay Boardriders Club proved once again it is the best thing to happen to South Bay Surfing since Dale Vezly shaped boards under the Manhattan Beach pier. Last Sunday, the SBBC//ET surf contest took place in El Porto. Like the seasons three earlier, contests nearly 200 surfers competed, ranging from groms pushed into the waves by their parents to surfers on the rise and surfers in denial.

And like for the previous contests, though conditions were flat everywhere else, El Segundo delivered, despite a six-foot high tide in the morning heats and a correspondingly low tide during the afternoon finals.

Phillip Barnett (on the rise) is a sophomore on the El Segundo High surf team, has been surfing El Porto since he was three years old. “My dad lifeguarded in El Porto and used to put me on his back when he bodysurfed.” Tom Barnett was a legendary lifeguard with Zuma tattooed across his back. He passed away in 2014.

Kevin Barry (in denial) competes in the Legends division. This year his daughter Brynn, 11, is also competing. “I just love surfing with my friends,” Brynn said. Her friend Milly Horstman, 9, added, “These contest’s are like a big beach party and everybody is so nice.”

Zachary Mitchell, 15, from Santa Monica expressed similar feelings. “I have done three contests and they keep getting better. My friends and I always have a good time.” His friend Beau Werger agreed. “I have gotten third twice. I love the people and you can feel the good energy on the beach.”

Trudy Watkins, 15 year, runs track at  Redondo and has only been surfing a year. “My friend Sarah Kohrogi talked me into competing and I am glad she did. This is my first surf contest but I am looking forward to the next one,” she said.

For surfers on the rise, the contests offer both camaraderie and incentive to improve. Palos Verdes High team surfer Karsten Wanke has been competing in the SBBC contests for four years. “It’s like a huge family here. Everybody is so supportive that it makes me surf my best. You never know when Parker (Browning) is going for a big air reverse or Hudson (Ritchie) is going to come out of an endless barrel. It makes me surf better being out there next to them.”

Wanke finished fifth in the Boys Under 18 division and fourth in the Men’s Open division. Browning won both divisions.

Wanke’s fellow Palos Verdes surfer Henry O’Keefe is where Wanke was four years ago. “I have only surfed contests this year. I still get too nervous.I just keep trying. It’s a lot of fun.”

The day’s waist size wave were ideal for longboarding. Colin MacLeod showed he is really improved his nose riding, standing in the curl down the line. Cash Cherry is 17 years old, another El Porto local, used his local knowledge to finish second in the longboard division, behind Michael Schmidt.

For spectators, the contests can be a confusing display

An early longboard heat offered spectators a contrasting display of old school and new school surfing. The old school surfer was Hudson Ritchie, 21, who did more walking than paddling as he moved up and back from the nose. The new school proponent was lip smacking, coaster rolling Dave Schaefer (denial). The 50-year-old Schaefer won the heat, though Hudson got revenge by winning the repercharge.

If there was an Up and Coming award presented on Sunday, it would have gone to Mateus Sperb, who won his opening heat in the 14 and under division. The home-schooled 10 years old is my next door neighbor and surfs with me everyday at Knob Hill. Mateus rips in every contest, pulling off 360’s while sliding out of the tube and carving big cutbacks. “The kids here are great and the judges are always fair,” he said.”

If there was a Joe Biden Denial Award for refusing to concede defeat, it would go to Greg McEwan. Last year he finished fourth overall in the Longboarding division. Sunday was his first contest of the year and he finished last in his first heat. He had been out of the water since November when he had knee surgery.