“Scarf Face” – It all comes out in the end [MOVIE REVIEW] 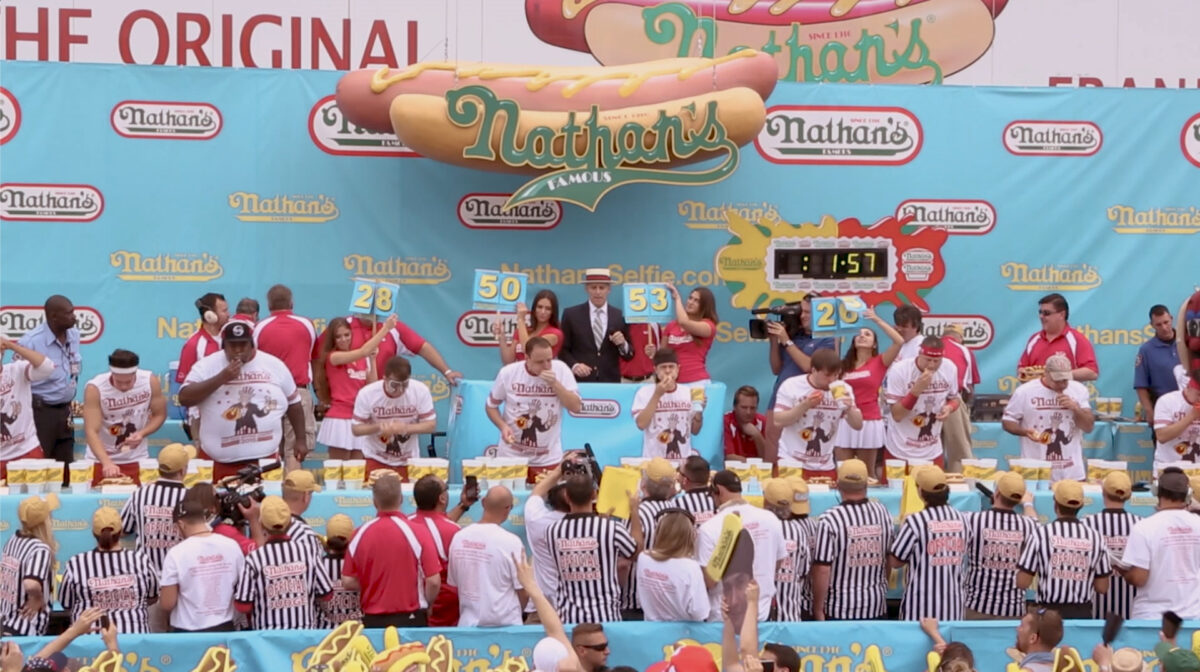 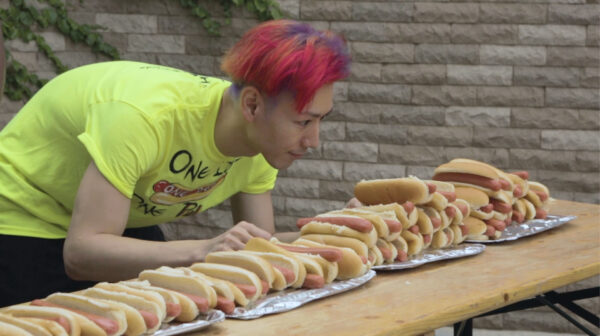 Watching the documentary “Scarf Face,” the term “get stuffed” immediately comes to mind. Joe Ruzer and Sean Slater tell the remarkable story of how the annual Fourth of July Nathan’s Hot Dog Eating Contest at Coney Island became the platform for eating competitions throughout the country, almost all dominated by George Shay whose original International Federation of Competitive Eating (IFOCE) morphed into Major League Eating (MLE), an organization owned and entirely controlled by Shay. Name a food and there’s probably a competition whether it’s Chinese dumplings, tacos, donuts, Buffalo wings, corn, crawfish, or any one of a number of other foods.

It is claimed that the original Nathan’s Hot Dog Eating Contest began in 1916 in front of the original Nathan’s restaurant at the corner of Surf and Stillwell Avenues in Coney Island. Like everything else about Nathan’s, this was part of a marketing campaign, and a successful one at that. And even if there was a contest early on, it wasn’t always associated with July 4th. Its true beginning as a contest is a bit sketchy but it became a sanctioned contest by the IFOCE in 1997. In its early runs in the 2000s, it was dominated by Japanese eaters, but it wasn’t until the advent of Takeru Kobayashi that the event took off. Since 2008 the length of the contest stabilized to the number of hot dogs that could be consumed in 10 minutes. The legitimacy of the scoring has always been questionable because it’s according to the number of empty paper plates left after the hot dogs on them have disappeared.

With Shay as the promoter of eating as a competitive sport, MLE contests proliferated as did his presence on TV. It’s hard to keep a straight face as Shay proclaims competitive eating to be the most beautiful sport, a sport he’d like to see in the Olympics. He hilariously compares it to the sports in the original Olympics in ancient Greece where they would finish the running, jumping, and wrestling with eating. I’m not sure if I got that right, but doesn’t almost everything end with eating? The most amusing quote on Shay’s grandiose opinion was from his own wife who wasn’t buying any of it. Eating, a sport? The Olympics? Really?

As the contests expanded and the top competitors gained fame, the contestants began to have a life of eating outside the annual event, and winners like Kobayashi with an international following began to gain commercial endorsements. This did not sit well with Shay who demanded a cut of all endorsement deals. When Kobayashi refused to sign a contract with MLE that entitled Shay to a percentage of his earnings, he was cut from all MLE contests. Not coincidentally his dismissal coincided with the rise of an American competitor, Joey Chestnut who did sign a contract. 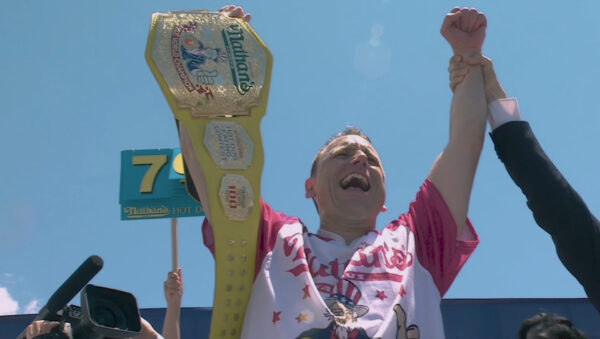 Chestnut went undefeated for many years until a new star rose from the West. Much time, actually too much time, is spent on Joey Chestnut consuming vast quantities of hot dogs or other foodstuffs, and too little on discussing the monopoly and conflict of interest inherent in one person controlling all the entrants and, as implied by some, the outcome of the contests.

Many contestants are interviewed including the women who compete in their own division as well as that of the men. There have been deaths but most competitors discount the likelihood that this unhealthy, bulimic lifestyle had anything to do with them.

These modern gladiators are there to entertain the masses who enjoy watching humans rutting at a trough like pigs. It is very funny and at the same time sad and disgusting. Only the top placers make any money, and even with them one wonders if it’s enough to risk high cholesterol. (These are hot dogs after all; who’d want to watch a broccoli eating contest.)

Shay is the big winner in all of this because he controls all the events, all of the players, and all of the media. Run afoul of any of his rules and you lose the right to compete. Sort of sounds like wrestling on TV in the 50s where the outcome was preordained.

At an hour and ten minutes, they still could have trimmed 20 minutes if they had eliminated some redundancy. I mean, after all, how much gelatinous matter spilling out of Joey Chestnut’s mouth do we really need to see (over and over and over).

I do, however, think that PETA could find better events to protest. After all, what exactly is a hot dog, even one by Nathan?

Opening June 3 at the Laemmle Glendale and through the Laemmle Virtual Cinema on June 10.