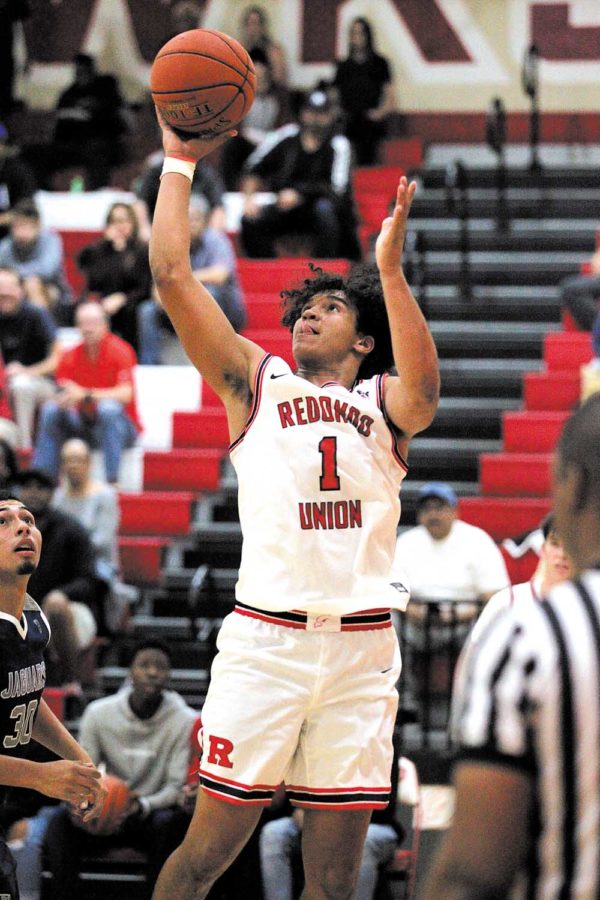 Xan Wesley, Redondo’s only returning starter, gives his team a one point lead at the end of the first half.

“I’m just glad it’s out of the way,” Welch said after his very first game as a head coach of any team on any level. “And I can see we have a long way to go.” 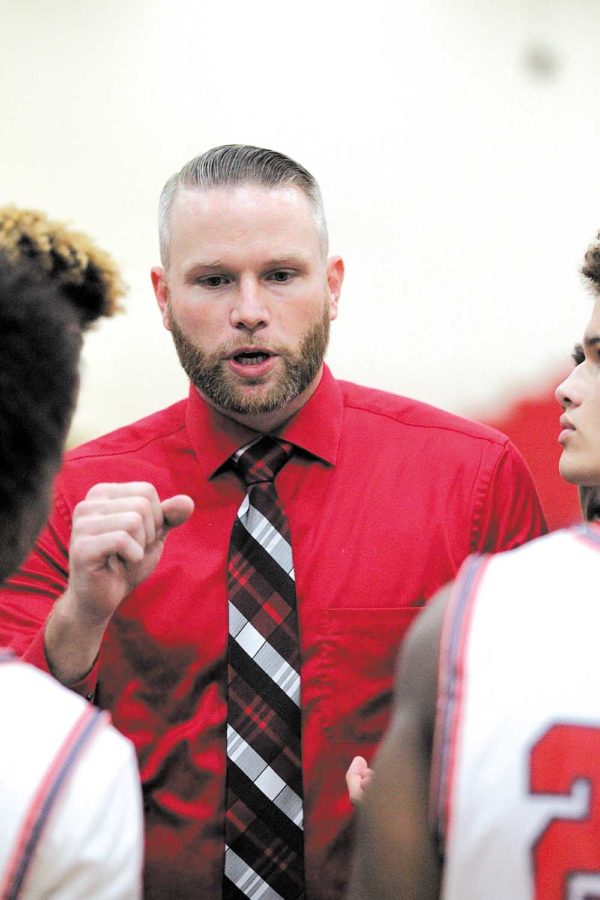 New Sea Hawk head coach Welch has a few words with his players after they fell behind in the second half.

Welch was a 6-foot-8 standout player at the Air Force Academy just a few years ago. He is the Sea Hawks’ fourth head coach in five seasons. Despite the turnover  – from Reggie Morris to Vic Martin to Ali Parvez and now to Welch — Redondo has managed to win seven straight Bay League titles and is gunning for an eighth consecutive championship this season even though they are returning only one starter from last season’s title team.

That starter, 6-foot-4 power forward supreme Xan Wesley, was expected to be the undisputed star of the Sea Hawks this year. But Monday’s game revealed that he is going to have plenty of help, and may even have to share the spotlight as the season develops.

The biggest surprise of the night was the emergence of 6-foot-4 senior forward Caike Godoy, who transferred from Redondo to Cathedral last year and transferred back to Redondo to play his senior season with the Hawks. Godoy not only led Redondo in scoring with 15 points but pulled down 10 rebounds and made several big steals that helped turn the game around after the Hawks fell behind by six points in the first quarter.

The other potential star to emerge Monday night was slick point guard Trent Smith, who played off the bench last year but is the team’s primary ball-handler this season.

The quickest player on either team, Smith was frequently able to turn the corner and get all the way to the rim. Early on he was a little too eager to take the shot himself instead of drawing defenders and then dishing to a cutting teammate.

But that soon changed.

“He’s our spark plug, and as soon as he started passing more our offense got in a better rhythm,” Welch said. “I felt they didn’t have anybody who could stay in front of him.”

Indeed, Smith scored the first bucket of the season with a quicksilver drive for an immediate 2-0 lead. That was immediately followed by a big-time collision that left a South East player lying on the floor for about 10 minutes before being wheeled off the court in a wheelchair, shaken up but apparently unhurt, to a nice round of applause from both sides of the gym. 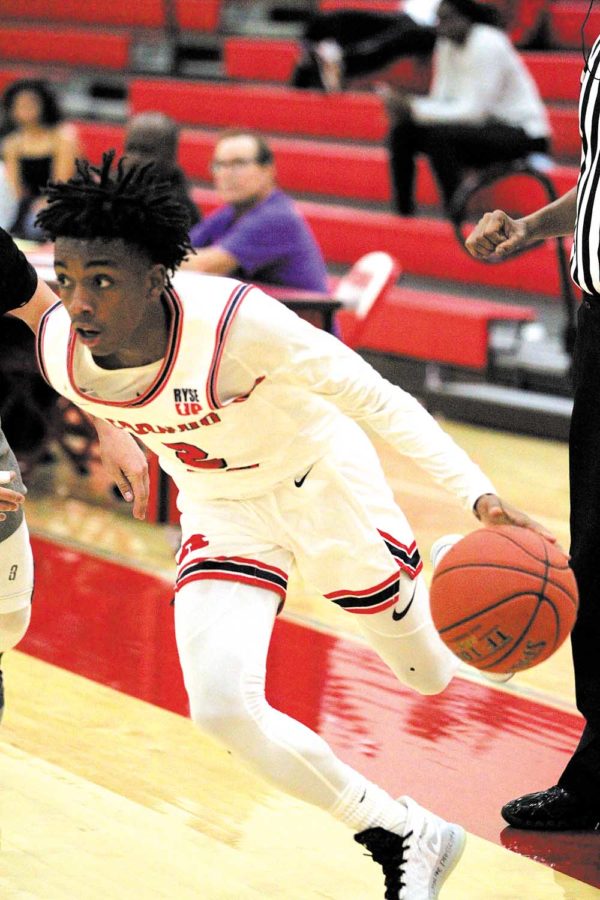 Point guard Trent Smith turns the corner on his way to the rim and the Sea Hawk’s first score of the year.

When the game finally resumed, both teams exchanged the lead several times. l South East had a 13-11 lead at the end of the first quarter.

The back-and-forth continued in the second quarter until South East had a 19-18 lead. At that point, the Redondo defense let down and the lead grew to 24-18, forcing Welch to call a Sea Hawk timeout.

Redondo came out of the timeout fired up, and Godoy immediately unleashed a power drive to the hoop and stole the ball for another easy score. When Dom Walker stole the ball for a coast-to-coast drive, the Hawks had pulled within 26-25. Then Wesley finally asserted himself, posting up for a turnaround power move that gave Redondo a 27-26 halftime lead.

The lead grew in the third quarter as Wesley hit a cutting Godoy for a beautiful feed and a 31-28 lead. Godoy followed that up with a corner three-pointer and suddenly Redondo had seized control of the game at 34-28.

Welch played 10 players to see exactly what he had to work with under game conditions. One of those players, 6-foot-1 junior guard Chidera Oti, came off the bench to nail a 3-pointer just as the buzzer sounded to end the third quarter with the Hawks holding a 45-33 lead.

Now the game was effectively over.

Welch was swamped with congratulations on his first career win as a head coach. H said he is looking forward to working with a great bunch of kids who are used to winning.

Redondo played again Wednesday night at 7 against Crenshaw, and then plays  Friday night against Bishop Montgomery, which is favored to win the tournament. The Sea Hawks will play again Saturday night, with the opponent and time to be determined by their record in pool play.

But for now the Sea Hawks – and Head Coach Nick Welch — are undefeated.