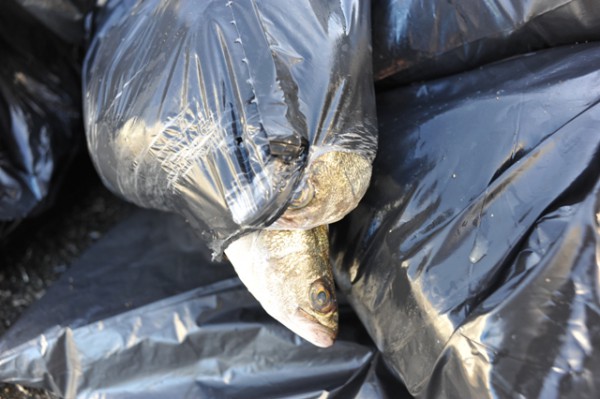 Fish that didn't survive were bagged and sent to the trash. Some will be preserved for educational reasons.

Fish were moved to less contaminated tanks in an effort to save their lives.

Around 11:30 a.m., some of the white sea bass at Redondo Beach’s LA Conservation Corps SEA Lab were swimming erratically. Some were even belly up.

Brent Scheiwe, the program director, reacted immediately. He shut down the water intake pumps and scrambled to find the source of the contamination. They quickly added a neutralizing agent; a quick call was made, and soon almost everybody who worked at the SEA lab was at the facility scrambling to save the thousands of sea creatures under their watch.

Within hours, however, half of the sea life at the facility was dead.

“We are all saddened by what happened,” said Scheiwe. “Some people have dogs, but staff here — we have fish.”

Fish that didn't survive were bagged and sent to the trash. Some will be preserved for educational reasons.

It was discovered quickly that the reason for the contamination was high chlorine levels. West Basin Municipal Water District, the company affiliated with the Temporary Ocean-Water Desalination Demonstration Facility located at the SEA Lab aquarium, moved in immediately to pinpoint the problem. They speculate a compression coupling located in one of the water intake pipes leaked common household bleach that was used to keep growth in the pipes under control, despite multiple layers of piping to prevent this. The pumps were turned off quickly, and no contaminated water is currently moving into the building.

“None of it got into the ocean, said Phil Lauri, principal engineer at West Basin. “It is only one-way coming in. We are surprised this happened at all, we double contain everything.”

Despite everybody’s best efforts, after going belly up, many fish were netted out of the water and bagged for the trash. 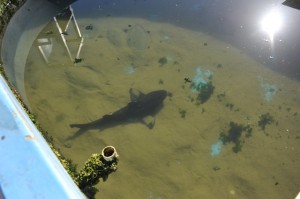 Fish were moved from tank to tank to save lives.

“That’s some sad stuff there,” said Eric Neuman, a White Sea Bass Restoration Program volunteer. “This was the best batch we had, lots better than most. We lost lots of volunteer hours.”

The majority of bottom dwellers and slow moving fish survived, but most of the schooling fish, including 7,000 juvenile white sea bass who were expected to be released in early March, were unable to survive the contamination.

“Everybody acted like professionals and saved as many fish as they could as quickly as they could,” Lauri said.

According to Scheiwe, many local aquariums have already called and offered to help them restock their fish. For the SEA Lab, which hosts many educational programs throughout the year and takes in rescue fish, this was a shocking, terrible blow to their population.

“It’s ironic because we spend a lot of time and money to protect the ocean,” said Lauri. “To have something happen like this is really sad.”

A group of recently hatched baby sharks were saved in the nick of time by some quick thinking individuals who scooped them out of the contaminated tank with cups and moved to a bucket of water along with an octopus and other fragile sea animals.

Other creatures were not so lucky. Along with two dead leopard sharks, the SEA lab reported the loss of their mackerels, perch, some halibut and bass. 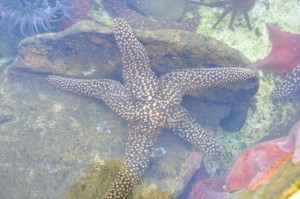 “We are really happy the black sea bass made it, and a sheepshead that has been here for awhile also survived,” said Scheiwe. “And we still have our popular bat ray. They are slow moving, and that bodes in their favor.”

Their seahorses, jelly fish and tropical fish tank were impervious to the chlorine because they run on a closed circuit, not connected to the other tanks. The touch tanks, with the star fish and sea anemone were also safe along with some halibut and the popular horned sharks. To save some of the fish, they isolated many by netting them and moving them to less contaminated tanks and containers. The schooling tank was completely drained after the occupants died.

West Basin and the LA Conservation Corps continue to work together to find the exact reason for the contamination. Divers will scout the pipes on Monday and will continue to investigate the problem. Some of the lost fish will be preserved for educational purposes.

“I’m impressed by how a lot of people stepped up,” Alexis Tate from West Basin. “It could have been so much worse if they wouldn’t have reacted so quickly.”

SEA lab will be closed for the weekend to deal with clean-up and continue testing, but will reopen as usual Tuesday for school groups and tours. Outreach vehicles will continue already scheduled programs. The lab is not seeking personal fish donations.