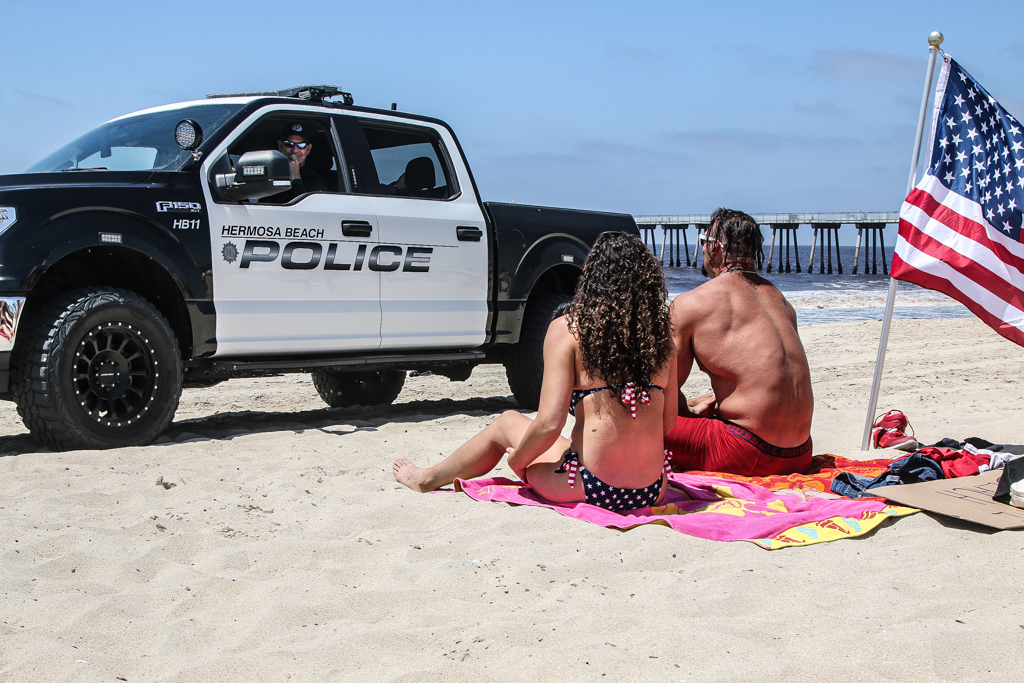 Shortly after noon on Friday, newly appointed Hermosa Beach Police Chief Paul LeBaron approached six-foot-seven Aaron Reed, who according to Flex Magazine is the world’s tallest bodybuilder, and told him, “If you step on the beach, you will be issued a citation. No hard feelings.”

Reed had organized a protest on social media against the county-wide beach closures taken to slow the spread of the coronavirus. About three dozen supporters showed up to Plaza, eventually marching on to the beach. Two citations were issued “to the organizer and his associate,” a Hermosa spokesperson said in an email, and images captured on a “drone, body cams and other technology” will be used “to identify any others who encouraged the crowd to go into the beach.”

For the first half of the protest it was difficult to distinguish protesters from passersby. Half a dozen people, including a child, carried pieces of white poster board emblazoned with slogans urging the reopening of beaches and businesses. But most simply stood in a circle whose diameter spanned Pier Plaza from north to south, with Reed and his girlfriend Ashley Puida, a waitress at Steak & Whisky, in the middle. Puida wore denim shorts and a stars-and-stripes bikini top and Reed, in a red tank top, waved an American flag attached to a large metallic pole. Creedence Clearwater Revival songs blared from a tiny electronic speaker at his feet, including the anti-war anthem “Fortunate Son.”

“Today is May Day. Very fitting,” Reed told the crowd. May Day began as a pagan celebration of spring and fertility. It has been associated with Marxist labor activism for more than a century and, more recently, with immigrant rights movements.

At the police station briefing that morning, Chief LeBaron said he told his officers, “Remember, this is a misdemeanor. A low level misdemeanor. Let’s not escalate it to a felony.”

After speaking to Reed, chief LeBaron retired to a nearby police command post where his officers were monitoring drone footage of the protest.

“The drone helps us keep situations in perspective,” LeBaron said. He mentioned the contrast between camera photos and drone photos of Huntington Beach last weekend. The camera photos compressed the images of the crowd, making people appear to be crowded together, he said. The drone images showed the Huntington Beach crowd to be safely dispersed.

Around 12:30, Reed asked everyone to join in a chant of “Open the beach!” Reed shouted “Hermosa Beach!” several times, using the low, exaggerated tone of a DJ in a nightclub to energize the protesters. With the flag held aloft, the crowd recited the Pledge of Allegiance and sang “The Star Spangled Banner.”

“There are a lot of patriots out there,” Reed said at the song’s conclusion, beaming. 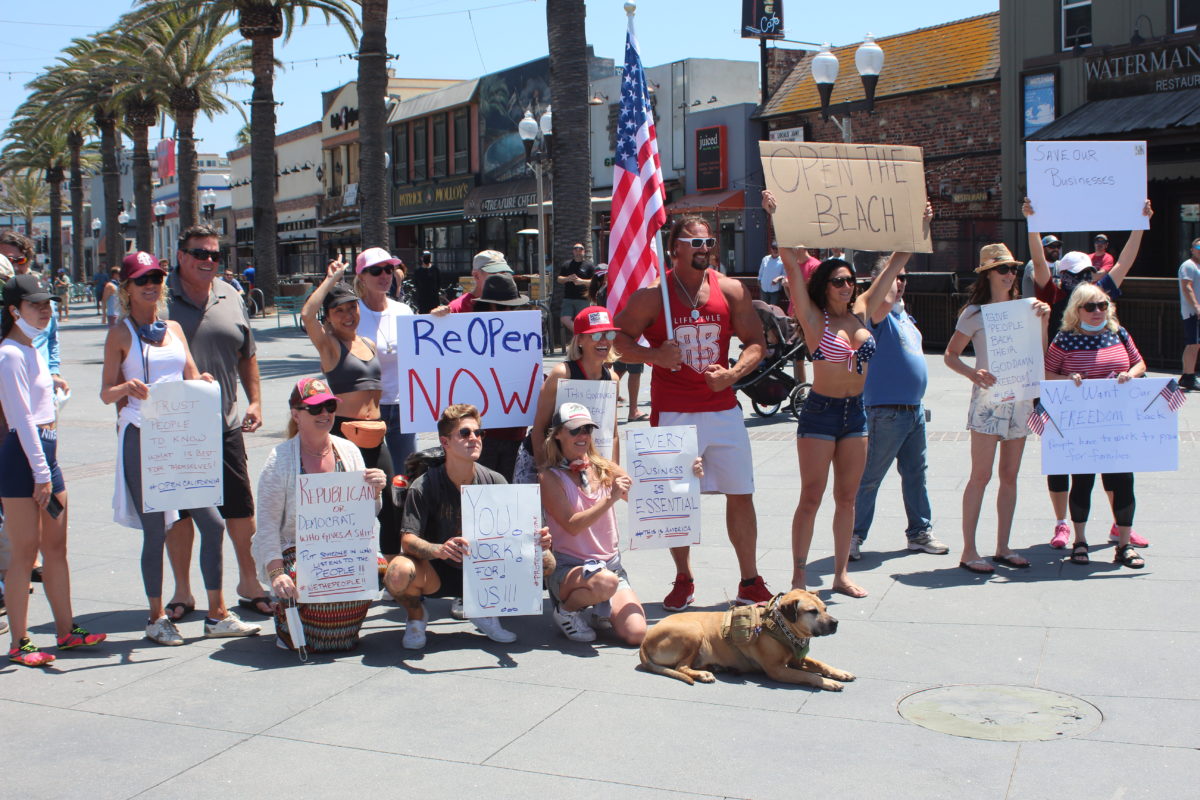 Protesters gather on Pier Plaza before saying the Pledge of Allegiance. Photo

After the singing finished, the crowd appeared to lose energy. But Reed and others urged them to move west toward the sand. The crowd massed near the barricades assembled on The Strand, and several protesters reminded the group to respect law enforcement. Three SUVs from the Hermosa Beach Police Department were parked at the foot of the Pier.

“These guys are our friends,” one man said of the police officers.

The protesters deliberated for several minutes about whether to cross the barricades and head for the beach. Eventually they agreed that if everyone went together they would be harder to stop. Most insisted the group should maintain the recommended six-feet of social distance, but some urged abandoning precautions and rushing toward the sand.

“Everyone knows the virus is a bunch of bullshit anyway,” said a man black spandex shirt.

The group ended up walking, in single-file and sensibly distanced, past Hennessey’s and then on to the beach. Another dozen or so joined them in a march toward the 10th Street lifeguard tower.

The protesters began shouting joyfully and running across the sand and into the water. Lifeguards in two red trucks kept an eye on the swimmers.

When Reed and Puida emerged from the water, Reed planted the American Flag in the sand and spread out a beach towel. Then he and Puida sat down on the towel and hugged.

Other protesters came up to congratulate them and vowed to return to the beach tomorrow.

Then, as the protesters began to drift away, Hermosa Police Sergeant Bill Higgins drove up to Reed and Puida, blocking their view of the ocean with his truck.

“Thank you,” Reed said as he rose to his feet. 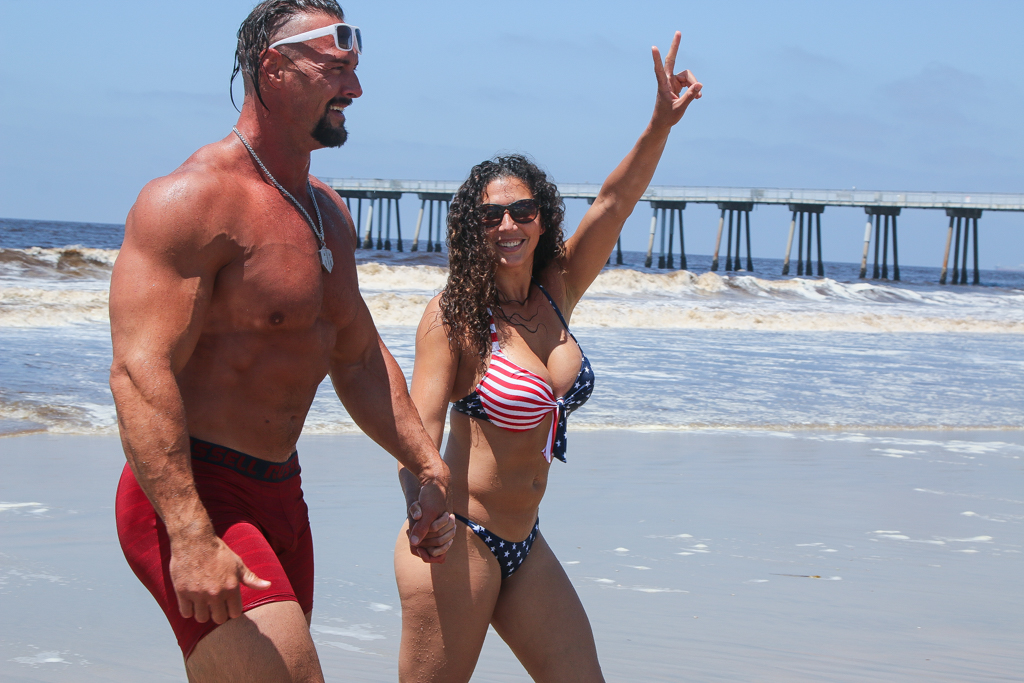 Meanwhile, about 20 people skulked around the barricades set up where 11th Street dead ends into The Strand. One, a shirtless man with a copy of Eckhart Tolle’s “A New Earth,” held a crimson beach towel, as if hoping to make a day of it. Almost all of those assembled expressed sympathy with the reopen cause, but were hesitant to set foot on the sand. One man said he feared losing his job if he were to be arrested or ticketed.

The coronavirus and the explanations of the government’s response was on everyone’s mind.

“So what’s the next step guys? How are we going to keep this up?” said a man on an electric bicycle. He spoke to a woman with several children, and said closing beaches and businesses was part of a plot that stretched from John D. Rockefeller to Bill Gates. Compulsory schooling, the man explained, was their way of keeping the populace docile.

The few people who had ventured onto the sand periodically returned. One, still wet from a dip in the ocean, said he did not think tickets would be issued.

“I don’t think they’re going to do too much,” he said of the police. “It’s a freedom of speech kind of thing.”

The crowd on 11th watched as those on the sand started to leave. Suddenly, a man wearing a T-shirt and a face mask who had been on the east side of the barricade stepped onto The Strand, revealed himself to be a plainclothes police officer, and began ordering people to assemble against The Strand wall. Believing those lining up were about to be ticketed, people on both sides of the barricades began jeering. The plainclothes officer attempted to corral those exiting and warned some who attempted to leave that they would be cited.

Almost everyone escaped without sanction, though, as a mass of people began scurrying off the sand and onto 11th Street. One of the last was a blonde-haired woman in yoga pants, who skipped across The Strand past police with her hands raised and palms open.

“White privilege!” yelled a construction worker laboring atop the Sea Sprite hotel on the south side of 11th Street as the woman crossed the barricade.

After leaving the beach, some of the protesters gathered on Pier Plaza, and began discussing how to make a future protest bigger.