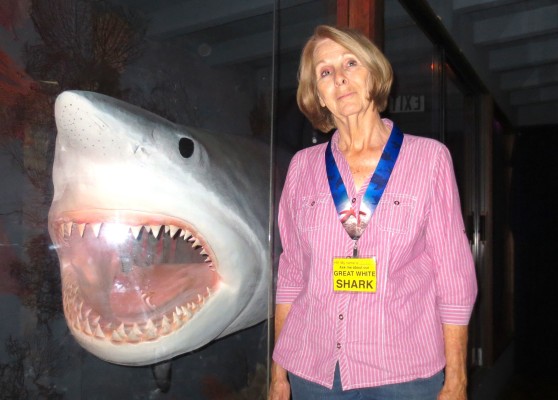 Judy Milner with Georgette, the 16.5-foot shark that’s been a Redondo Pier institution for decades. Photo

Judy Milner with Georgette, the 16.5-foot shark that’s been a Redondo Pier institution for decades. Photo

It was 1972 when Chuck and Judy Milner opened their first gift store on the Redondo Beach Pier. In the intervening years, they owned and operated seven shops, but at the end of this month, they will close their last store on the pier, Shark Attack, after 24 years.

“We are now on our third generation of people coming to stores we have owned on the pier,” Judy Milner said. “All of the time, people come in and say they remember seeing Georgette (the shark) when they were a kid and now they’re bringing their children in.”

The Milners at one point simultaneously operated five different shops on the pier, four of which were destroyed by the 1988 fire. 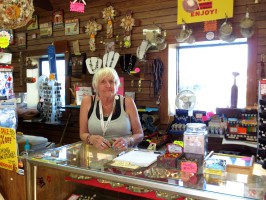 Longtime employee Rosemarie Dorin behind the counter at Shark Attack on the Redondo Pier. Photo

“The fire was devastating,” Milner said, “but we knew there was nowhere else we wanted to be but on the pier.”

Shark Attack was opened in 1989 and carries everything from World War II memorabilia to gems, from tourist items to jewelry, from fossils to shark’s teeth.

“We always say we carry everything from antique weapons to rubber sharks,” Milner said. “We run the gamut. If it’s unique, we carry it.”

But the cornerstone that Shark Attack was built around is Georgette, a 16-and-a-half foot great white, that weighed 3,400 pounds when she was caught off the coast of Washington and has been taxidermy dry preserved. The Milners gave her an aquarium-style home in the store, providing educational tours on the most feared breed of shark.

“Shark Attack has been a landmark on the pier since it opened,” Milner said. “People from all over the world and people from other states and locals visit Georgette regularly.”

The Milners are donating the shark and Georgette’s new home will be 60 miles south at the Ocean Institute. She will be the centerpiece of an exhibit focusing on “Sustainable Seas,” which will look at sharks as apex predators, their importance in the ecosystem and their unique evolutionary characteristics that have enabled them to survive and thrive for millions of years.

“We are very excited about bringing Georgette here,” said Dan Stetson, president and chief executive officer at the Ocean Institute. “She will inspire children and adults as to the awe, majesty and fragility of our ocean planet.”

When the Milners close their doors it will be a true ending of an era on the Redondo Beach Pier.

“We have been Redondo Beach Pier people for over 40 years now,” Milner said. “It’s hard to imagine not being out here anymore.”