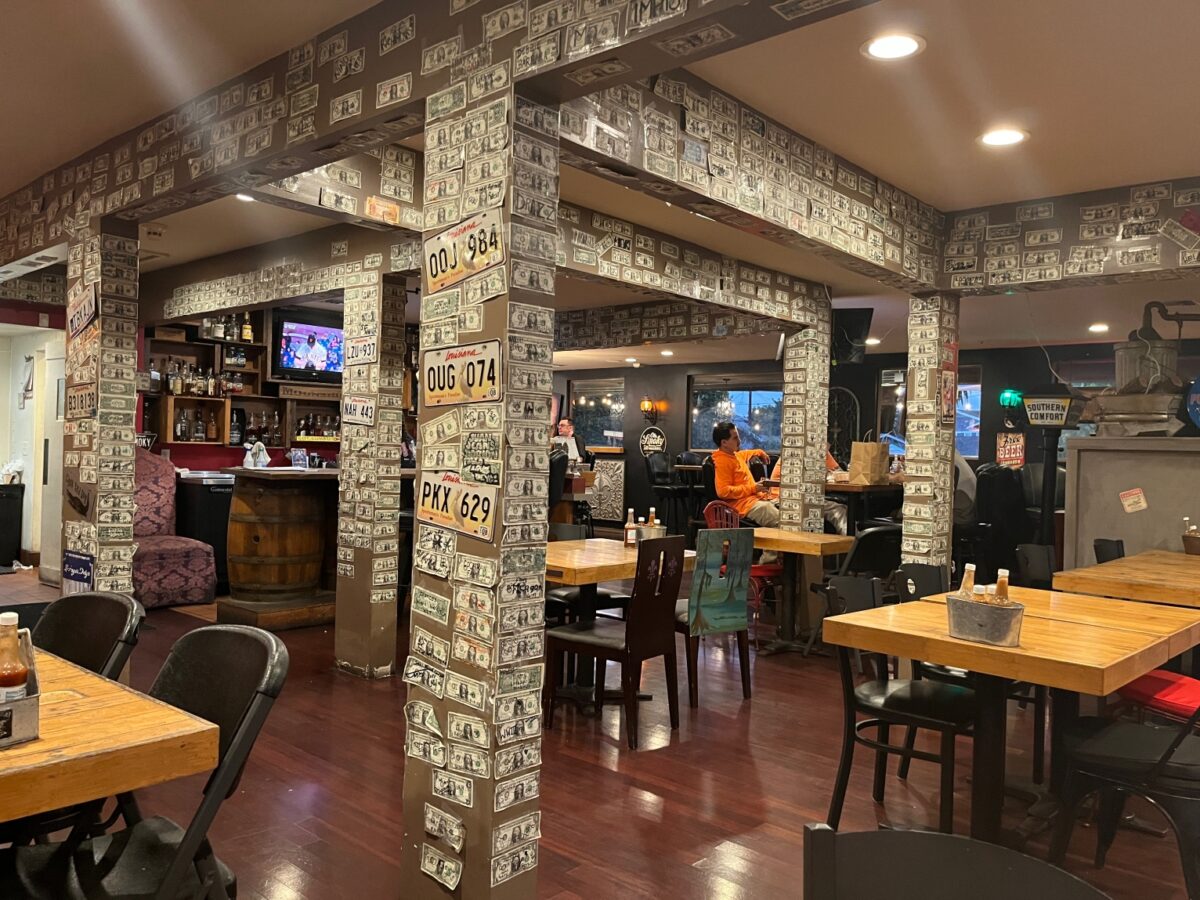 “It’s time for me to review the Ragin Cajun again,” I mused to my wife as we drove by on the way to someplace else.

“You just want an excuse to order their fried chicken,” she shot back. “How much have they changed since you last reviewed them?”

She wasn’t entirely wrong about me wanting their fried chicken, because it’s the best I’ve found in the South Bay, but it had been long enough since I last wrote about them that I had to check. Hmmm, 2014, and founding partner Stephen Domingue had departed since then, so there had probably been changes in the menu. I’ll admit that I might not have noticed some of them, because though I had been back several times since then, I tended to get the fried chicken and jambalaya, gumbo poured over jambalaya.

While the interior of the place had the same roadhouse décor as ever, one change was immediately noticeable: we were able to ask for a table without yelling at the person working the door. In most previous visits the music was extremely loud, so we usually sat outside. The music now is a mix of Cajun and New Orleans tunes, at a volume that sets a mood but doesn’t overwhelm conversations.

The menu had indeed changed, and was noticeably shorter. The stuffed snapper and crabcakes are out, a hot chicken sandwich is in, and the seafood boils that used to be an occasional special are now on the regular menu. Another addition, and one that we ordered as soon as we saw it, is fried okra. I did not grow up appreciating okra, which has a strong flavor and slightly slimy texture when in soup, but having it fried was a revelation. (The first time was at the Smith House in Dahlonega, Georgia, in the 1980’s, a meal so good I remember details to this day.) The Ragin Cajun’s version of fried okra is coated with a crunchy cornmeal batter that is light on the seasoning, Southern style rather than what a Californian would call Cajun, and it’s very good. We knew as we ordered it that we were doing so for the flavor rather than to fill ourselves up because the portions here are substantial, but we just had to do it.

Excuse me, did I say that the portions were substantial? I actually meant immense. You see, all of the entrées are served with your choice of sides and include a cup of gumbo, bayou bisque, or a garden salad. If you have a moderate appetite, you and someone else can easily split one entrée here and maybe, just maybe, an appetizer and come away satisfied. 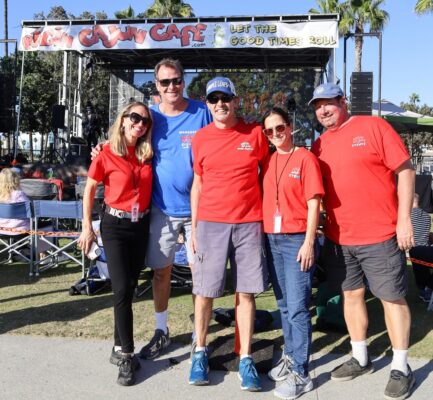 Ragin Cajun owners Lisa and Steve Hodges (far left, and far right) with fellow RoctoberFest promoters Pierre Hoffman, and Assae and Alita Cohen at the 2021 cover band festival in Seaside Lagoon. This year’s RocktoberFest, will feature a dozen cover bands, including Fan Halen, and Green Today. The festival returns to Seaside Lagoon Oct. 21, and 22. Tickets are available at RoctoberFestival.com. Photo by Kevin Cody

We selected the Bayou Bisque, made with chicken, sausage, and corn, and their famous gumbo. Though both soups contain chicken and sausage they’re quite different, the bisque mild, creamy, and rich with a gentle cumin overtone, the gumbo spicy thanks to a long-simmered broth with a generous shot of red pepper. It’s not three-alarm fire on your tongue, but a smoky, rich heat that builds, and it’s been a mainstay at every version of this restaurant. (For those who haven’t lived here for a long time, the Ragin Cajun has existed in four different locations, and this version has been around since 2013.)

We decided to pair our meals with a cup of rum punch and their “Category Five” hurricane, a premium version of the famous New Orleans drink. If you have only had a hurricane in the tourist bars around Bourbon Street, you probably think of a hurricane as a very sweet and fruity drink with a kick from cheap rum. When made correctly, as it is here, it’s powerful but balanced. The rum punch was actually a bit sweeter, but it was a fruity sweet rather than sugar sweet. Have one of either, but if you are driving or even navigating, no more than that.

For dinner I ordered the blackened catfish, my wife the fried chicken, which was excellent but not as she remembered it. When they first started making fried chicken here, there was a strong shot of Cajun seasoning in the batter, which I enjoyed but my wife didn’t. They will still make it that way if you ask, and if you like spicy chicken you should ask. However, the chicken now has a very mild seasoning and is classic southern fried. The batter was very crisp but not greasy, and the big half-bird arrived so fresh from the fryer that we had to wait a while to eat it. She ordered it with onion rings, also very good, and a cole slaw that was light on the mayo, which is the way we like it. 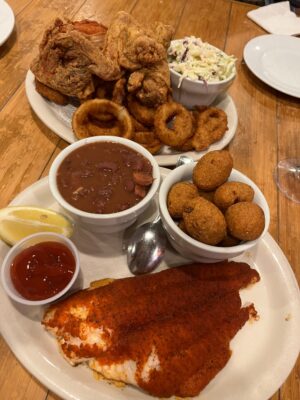 My catfish wasn’t what I expected – blackening is usually done by coating the fish liberally with a red pepper-based seasoning and then searing it on a very hot griddle, which toasts the spices and gives it a distinctive texture and blackish color. This had been coated with seasoning but was apparently broiled, so it was very juicy but didn’t have the flavor or texture I associate with blackened seafood. While it wasn’t bad, I prefer the traditional version and will order something else next time. For my sides I picked red beans and rice and hush puppies, both of which were excellent.

We didn’t have enough room for dessert but wanted to try them, so I went back two days later and picked up a bowl of crawfish etouffee too because I just couldn’t leave without it. (The word etouffee means smothered, and the plump crawfish were in a moderately spicy brown roux made of the Louisiana trinity of onion, celery, and bell pepper along with garlic, herbs, and respect for tradition. If you’ve never had it before, get it here, because they make it right.)

We had hoped to get the pecan pie, but they had been out for several days in a row, so I ordered the butter cake and a peach cobbler. The butter cake was like a standard pound cake, but a lot more buttery, and was served with ice cream. I think a little fruit on the side would have made this a more interesting dessert, but it was OK as it was. The cobbler was better, made like a fruit pie with a pastry lid rather than with a crumble top, and had a concentrated flavor of peaches. I still want to try that pie, but if they’re still out of it the next time I’m there and I have room left, I’ll go for that cobbler.

The service was friendly, informal but efficient, and when you consider the amount of food but we got, the prices were reasonable. I wish they would consider making some items in smaller portions or offering a price that doesn’t include the soup or salad, because for most people it’s just too much, but if you expect to take some leftovers home then it’s a deal. The Ragin Cajun has changed plenty since the first little outpost opened in Hermosa almost forty years ago, but it’s still a great place for Southern hospitality.