We can all thank Hollywood for the perception of surfers as stony slackers. Tommy Ostendorf slaps back at this identity with one hit of the lip and one push into the whitewash.

Ostendorf, 28, got his first taste of the soup at age 10, learning to ride the inside of El Porto in the city where he was raised and where his parents are from.

His dad bought him a “fun board.”

“It was a 7-foot-6, brown $50 special,” he said. “My dad helped me through the waves and pushed me into a few. I’d been surfing on boogie boards for years so getting up wasn’t the problem. Getting through the surf was the tough part.”

Junior Lifeguards is where the young Ostendorf polished his chops, riding the unforgiving, yet safe, foam paddle boards with the octagon cut in half rails, no leash, handles on the deck, and a super flimsy, single fin prone to sliding out.

“I was in the program for 6 years. It was and is a great program and it established my confidence as a waterman.”

Ostendorf attended Manhattan Beach Middle School and was a member of the first surf PE class with Mr. Geller. Unlike the majority of his classmates, he acquired a taste for riding longer equipment.

“My first real board was an 8-foot-6 Jacobs,” Ostendorf said. “My dad longboarded back in the day and I guess I naturally followed.”

Tommy and his “new wave” of longboarding. Photo courtesy of Tommy Ostendorf

Ostendorf was a stand out at Mira Costa, rounding off a longboard team that included surfer Mike Siordia. While Siordia followed a more traditional route, Ostendorf embodied the shortboard orientated approach with tricks like the “helicopter” (“spin to win”) that epitomized ’90s modern longboarding, balancing the team and making it a solid force.

“I was riding lighter Spyder longboards mostly like a shortboard,” he said. “This hi-pro board allowed me to do things that guys on traditional boards couldn’t do.”

After high school and a contest record that had him named to the South Bay Surf League 20th anniversary all time team, the studious Ostendorf was accepted into the University of San Diego.

“I moved down to Mission Beach, which was basically like El Porto but with nobody out,” he said. “I’d surf good waves like Black’s, but I rather surf crappy/okay waves with nobody out then a good wave with a 100 other guys.”

While the notorious San Diego party scene is known to have taken down a few surfer dawn patrols, Ostendorf concentrated on scholastic endeavors and contest results for his college surf team.

“USD is a small school. Your teachers know your name so it’s hard to miss class,” he said. “After my first year, I was able to schedule classes in the afternoons and get Fridays off, allowing a surf every morning.”

His commitment paid off. In 2006 he was the NSSA College Longboard National Champ.

“Winning the national final was luck, really,” Ostendorf said, “The best wave of the heat came to me and fortunately I didn’t fall.” 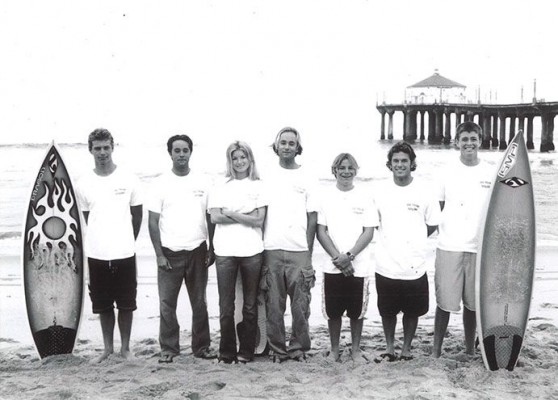 In the summer of ’97, Ostendorf got his first job working at Jimmy Miller’s CampSurf. He was one of the first employees. Through the summer months during high school and college, Ostendorf was down at El Porto teaching one student at a time. By the time Jimmy Miller tragically passed away in 2004, CampSurf had grown to include a full team of instructors and lessons offered year round.

“Jimmy Miller’s family left the camp to me, Mark Gerold, and Chris Brown,” he said, “We’re all equal partners, Mark handles the Jimmy Miller Foundation which is a nonprofit organization that supports the healing of mental and physical illness through surfing and ocean related activities. Chris and I focus on the camp operations.”

During the summers, he coordinates the surf camps and private lessons at Campsurf. During the winters he has the ultimate job for a surfer. He is a Tavarua boatman.

“My friend Jason Napolitano had been a boatman for many years and got me dialed in,” he said.

Paradise comes with a big responsibility. The perception may be that the boatman drives the boat, surfs perfect waves, parties, and hits on the tourists.

“That’s not the reality”, Ostendorf said. “We all have rescue and lifeguard certifications. It can get heavy out there and a lot of guests overestimate their abilities. It’s our responsibility to make sure they make it back safely.”

Being abroad in the South Pacific has allowed him to travel to Australia, New Zealand, and Fiji.

Tommy ducks and covers from on break from boatman duties. Photo by Scott Winer

“I wanted to travel for an extended amount of time, so I booked a ticket, kind of on a whim, to New Zealand without any itinerary,” he said. “I scored beach breaks in the middle of nowhere without a person for 10 miles in either direction. It was an incredible learning and life experience.”

In Australia, Ostendorf and a buddy spent two months exploring the east coast, surfing a different spot every day, some days several spots.

“The east coast of OZ is similar to CA, but every stretch of theirs has a ripable beach break. It’s ridiculous,” he said. “The session of my life was at Cloudbreak with three of my buddies. It was pretty solid and we towed for like 6 hours.  Perfect conditions and it was just us. Everyone else was fighting for waves at Restaurants.”

Last year, Ostendorf couldn’t make his pilgrimage to the crystal clear waters and reef passes after snapping his ankle and being sidelined for six months. His time out of the water to rehab at the Blue Water Pilates Studio in Manhattan Beach (his lady works there), gave him a chance to formulate the progression of CampSurf and step up his role in the camp.

Working with the advanced surfers. Photo by Mark Kawakami

“I was influenced by the way the studio manages classes and private lessons,” he said. “Much like their enrollment, on our website, you can choose by classes by dates, times, and what sets us apart, by instructors.”

Powered by his degree in business, for the past two years Ostendorf has been the camp’s operations manager. His run at the helm has taken CampSurf to a level of professionalism that rivals any mainstream sport clinics or academies.

“Our staff includes the best waterman/surfers in the South Bay, including Jason Napolitano, Jamie Meistrell, Matt Pagan, Dayton Silva, Chris Wells, and a lot of the Mira Costa Surf team,” he said. “Besides teaching the absolute beginner, with our staff’s competitive background we teach and coach many advanced classes to prepare surfers for getting on the high school surf team, and competing in the NSSA and South Bay Boardrider’s contests.” Smiles for miles as Tommy instructs a determined grom. Photo courtesy of CampSurf

As well as instruction in the water, “nurturing” best describes Ostendorf’s approach to coaching the young surfer who might make a run at being a professional surfer.

“We give examples and give guidelines on surfing professionalism as well as steer away young surfers from following some of the darker paths of the lifestyle,” he said.

Growing up, Ostendorf had an amazing support system with sponsors like Spyder, Auctiv, Hippy Tree, and Body Glove and just wants to provide the same thing for his students.

“Being in and around the surf industry, the staff and I have got to know some of the industry’s good people and major players,” he said. “We’ve been able to put advanced students in position for sponsorships.”

Running a major surf camp with multiple locations as well as his winter boatman duties means Ostendorf is busy. But, the perk of working in the surf industry is simple — surfing. Although competition is put on the backburner, Ostendorf can be seen shredding daily on one of his Dan Cobley shapes and is anticipating a new stick from Mangiagli Manufacturing. He believes in riding for what the waves call for, either something long, short, or for those small, flat face Porto waves, a stubby shortboard.

In the past,  surfers would scheme to get into a position like this. Photo courtesy of Tommy Ostendorf.

“I trust Cobley and Mangiagli because they get how I surf,” he said, “They take their time to design a board with you that works for you.”

Camp Surf recently formed a partnership with Body Glove and plans to expand.

“It’s been my dream to open camps all over the world and to take CampSurf into worldwide travel,” Ostendorf said. “I met the right people in Body Glove and with their networking and experience of 60 years; it’s just the next logical step.” DZ