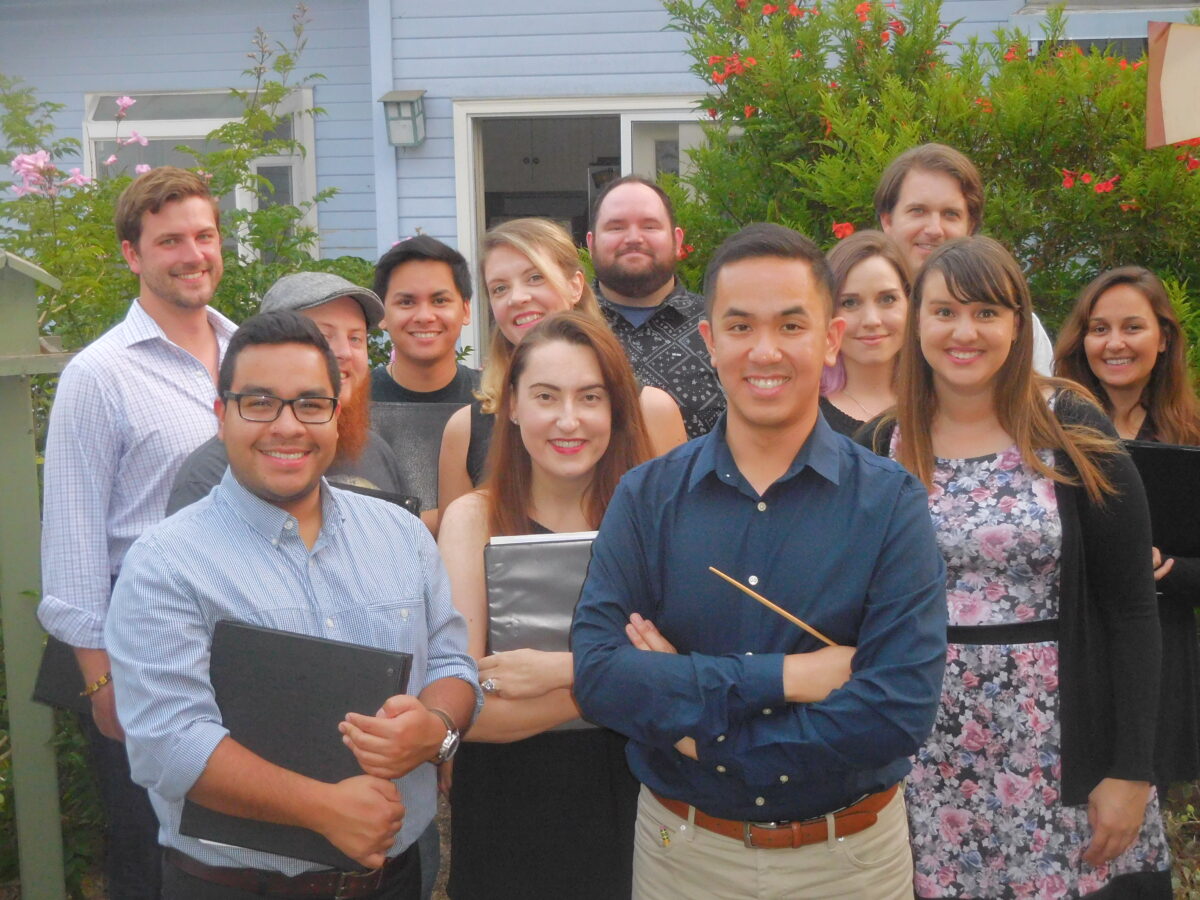 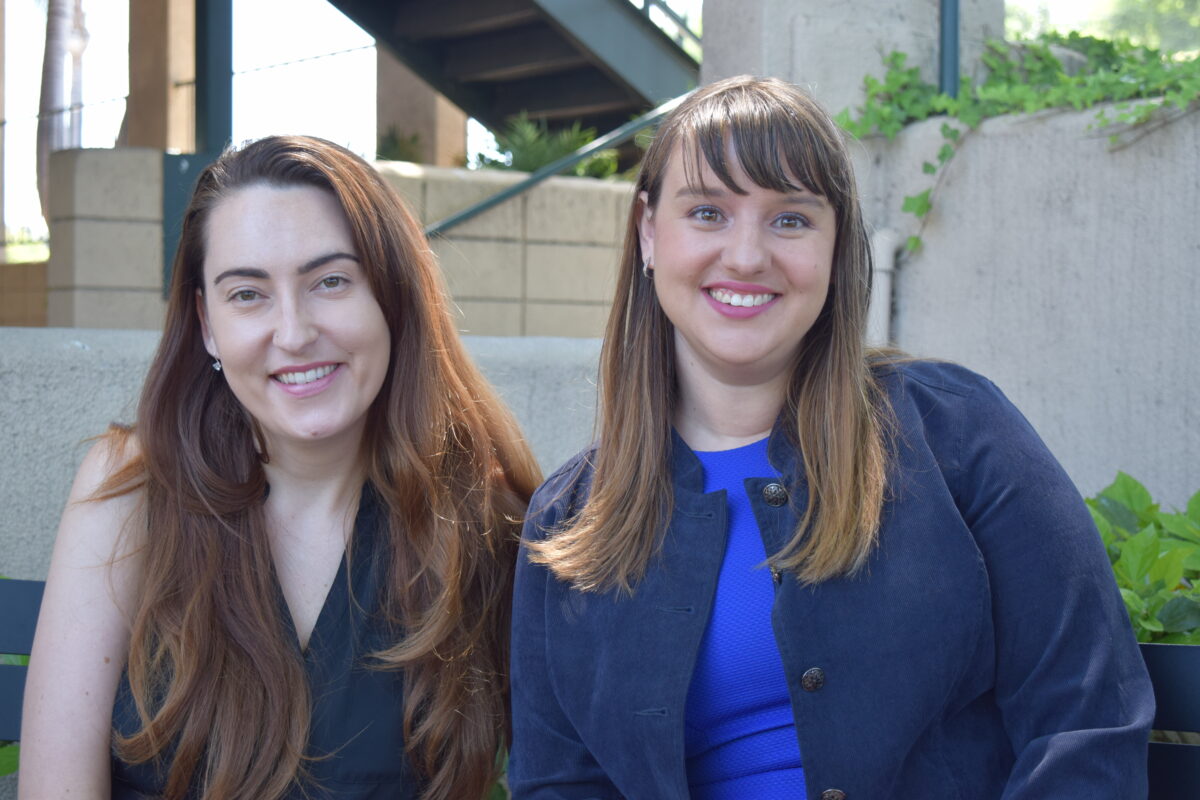 The Musical Grace of the Human Voice

The South Bay Chamber Singers is a brand new choral group, founded and directed by Redondo Beach resident Mallory Gantner. The inaugural performance takes place Saturday in Palos Verdes Estates. Gantner and group member Amy Gordon (a composer whose “As Times Stops to Rest” song cycle is being premiered) discussed their group, how it came to be, and what their hopes for it are in the future.

How did the two of you meet, and how did the idea for a South Bay choral group come up?

Amy: Mallory and I met at Cal State Long Beach, where I received my masters in Composition. Since we went to the same school and live in the same area, we have a lot in common and became very close. We have been singing together in various groups and concerts for almost seven years, so we wanted to continue doing that in a classical choral setting, but locally. Mallory has long dreamt of starting her own choir, so I said “Why don’t you do it now?” She did, and it led to the founding of the South Bay Chamber Singers.

Mallory: Once we determined that I should start my own choir, I needed to find a venue and set a date. I had sung in the choir at St. Francis Episcopal Church a few times and I decided to ask the choir director, Jeannie Peters, if it would be possible to rent out the sanctuary for an August concert. She said, absolutely, as long as we do not charge admission. After that, I began asking every professional singer I had worked with, including close friends, if they would be interested in performing in a choir concert, but without receiving pay. I initially wanted 16 people, but due to scheduling conflicts, I had to settle with 12.

What is it about choral music in general that appeals to you?

Amy: I got my start in music as a singer-songwriter. I have been writing songs since I was ten, so my heart has always been in melody and its relationship to lyrics. When I started applying to colleges, I realized I wanted to major in music and officially pursue composition. I have come to love choral music because it has all the elements of songwriting (text, story-telling, singing) blended with classical techniques. I have also found a wonderful community of extremely talented and kind musicians in Los Angeles who are involved in the choral scene.

Mallory: I have always loved choral music, even as a kid, especially since my mom exposed me to classical music at a very young age. I remember listening to the “Habanera” from the opera “Carmen,” and being so moved by the intensity that the choir created to the overall scene. In college, “Carmina Burana” was the first large choral work that I performed, and it solidified my love for choral music and intensified my desire to sing in choirs. Choral music is such a unique genre and it seems to be more accessible to non-musicians, especially since it contains the written word.

Are there existing choral groups in other parts of Los Angeles that have influenced you, that you

see as a kind of model?

Amy: Mallory and I are both very awed by the consistent masterful singing by the LA Master Chorale. Since the success of “Glee” and “Pitch Perfect,” it seems like a new audience has been exposed to and fallen in love with choral and a cappella music. There are a lot of new choirs in Los Angeles performing new music as well, such as L.A. Choral Lab, Choral Arts Initiative, C3LA: Contemporary Choral Collective of Los Angeles, and Nova Vocal Ensemble, to name a few.

How many people do you have in your group at present? And is this a number that you’re pleased with or do you hope to increase its number?

Amy: We currently have 12 singers plus Bryant Nguyen conducting and Manuel Arellano accompanying on piano.

Mallory: I absolutely want to expand the choir, hopefully to around 20 people, and to include more opera singers so that we can create a fuller, more versatile sound.

How did you find your singers, and how did you audition them to know if they would fit in with

your group and your concept of the group?

Amy: The singers are our friends who we have already sung with in previous concerts or ensembles, so we didn’t really have a formal audition process. Everyone is a very serious and talented musician who loves singing for the sake of singing. For me, I feel so lucky that I get to hang out with my friends doing what I love to do most: singing and composing.

Are the singers mostly young? Is there an ideal ratio of male to female voices?

Amy: The singers are mostly young adults who have recently graduated from college. We have an even split of men and women (three sopranos, three altos, three tenors, and three basses).

Mallory: We range in age from late 20s to early 40s. We like to keep an even number of people in each section (soprano, alto, tenor and bass) in order to maintain balance of sound.

How often and where do you practice?

Mallory: We rehearse once a week for two hours at my house in Redondo Beach.

How did you make the connection with St. Francis Episcopal Church?

Mallory: As I mentioned, I sang in the church choir a few times and therefore had worked with the choir director, Jeannie Cobb. She has been so generous in allowing us to use the church and I am incredibly grateful. Without her help, there would be no concert.

For your inaugural concert, how were the selections chosen? Earlier, you mentioned an emphasis on living composers; would care to elaborate?

Amy: Most of the pieces in the concert were pieces that Mallory had fallen in love with throughout her singing career and wanted a chance to perform with her own choir. I approached Mallory with the possibility of premiering [my] song cycle, “As Time Stops To Rest.”

Mallory: Yes, most of the music I chose were pieces that I performed in college with various choirs. They were pretty randomly chosen, not following a particular theme, but simply music that moved me. Also, I wanted to feature Amy’s beautiful music as well, which led to her completing a song cycle for our choir to perform.

Please talk about the selections you chose for this concert, and why you chose them.

Mallory: As I mentioned previously, I performed the majority of these pieces with various choirs in college, and I really love them. Eric Whitacre and Moses Hogan are two of my favorite modern choral composers/arrangers. Debussy and Durufle are two of my favorite classical choral composers. Going back to Moses Hogan, he is known very well in the world of gospel music, which I absolutely adore. I especially want to bring more gospel music to the South Bay. And, of course, I wanted to feature the work of Amy because she is an incredible composer!

I would like Amy to describe and expound upon her song cycle. Tell me about the ideas for it and how it came about from concept to finished work.

Amy: The idea for my song cycle started when my aunt Susan Jordan, to whom I was very close, passed away a few years ago. We were given a book of her poetry at her memorial and I fell in love with her poetry immediately. I decided I wanted to honor her memory by composing a song cycle setting three of her poems, specifically “Two Friends,” which paints a serene setting of two friends losing track of time sitting by the sea, “Storm’s End,” which describes a violent storm raging “across the bliss field” and then finally passing, leaving the narrator with a sense of peace and calm that sometimes occurs after tragedy and loss, and concludes with “Magic” which contains the climactic line of the cycle, “But oh, for a moment I grow flowers with my hands,” which was the line that made me want to write the cycle originally.

Do you envision the chorale tackling new or experimental works on a regular basis? Do you see

the group doing a mix of new/unknown and somewhat familiar works?

Amy: I would love to keep exploring new works and hopefully continue writing for the ensemble. I think we both hope that the group becomes permanent so we can continue choosing interesting repertoire from living and past composers.

Mallory: Same as Amy, I am willing to step outside the box and explore all genres of choral music. I also have many friends who are composers and I love collaborating, so my dream is to perform as much original music as possible.

I believe you said that you’re hoping to present concerts at least twice a year. But maybe that will change depending on how well the events are received, or whether you’re invited to perform at special engagements.

Amy: We are both very hopeful that this will become a permanent choral group in the South Bay

and that we can continue to have concerts in the future. We definitely welcome any new

opportunities for the group to perform, as they hopefully arise.

Would you care to add anything else?

Amy: If people are interested to hear more of my music, they can visit my website, amygordonmusic.com, which has all of my choral and chamber music, as well as original songs and film scores.

Mallory: If people are interested in joining the choir or using us for a potential gig, they may e-mail me at: malloryg85@gmail.com.
The South Bay Chamber Singers perform at 4 p.m. on Saturday at St. Francis Episcopal Church, 2200 Via Rosa, Palos Verdes Estates. Free; donations appreciated. (310) 456-7940. ER