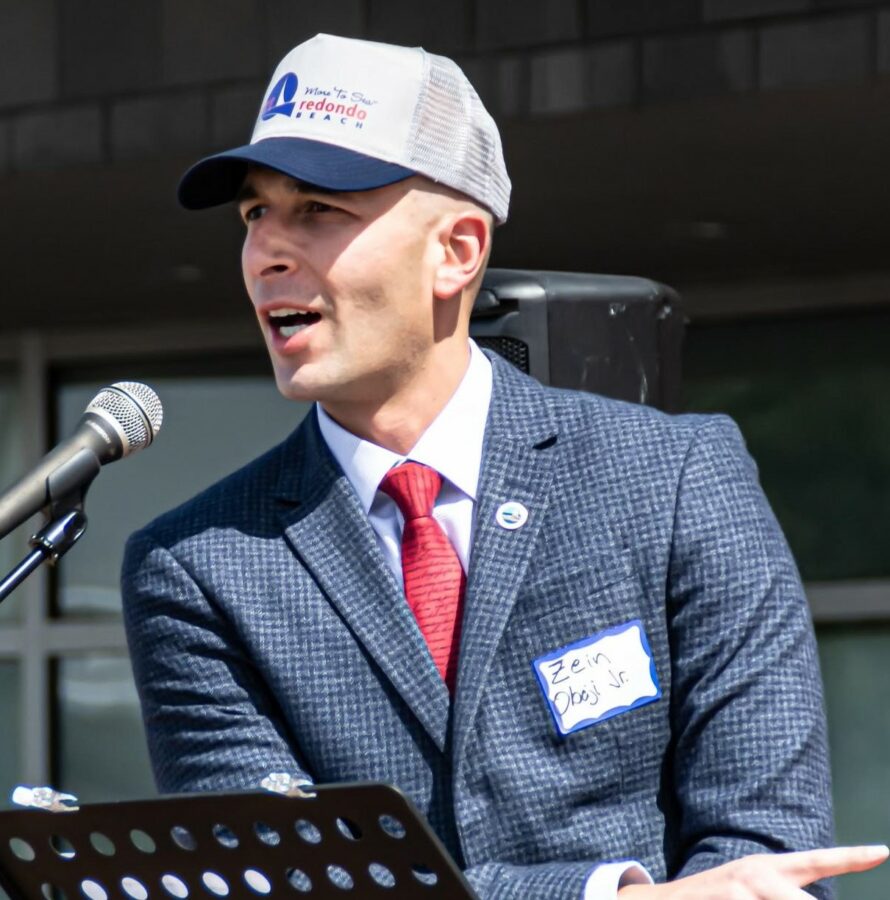 The State Bar of California filed five new charges Dec. 29 against Redondo Beach City Councilman Zein Obagi, Jr., for actions stemming from a financial dealing with a former client, and the subsequent malpractice suit Obagi filed against his attorney in the matter.

The State Bar first put forth a misconduct complaint with seven charges against Obagi in 2021.

“This is just allegations, more allegations by frankly, a bad prosecutor,” said the District Four city representative. “But the court will decide that soon enough.”

He has 20 days to file a response to the new charges.

“There are five counts? I haven’t looked at it that closely,” Obagi said last Friday. “I just got out of an appointment with my relatively new therapist. I’m focused on my three principal roles; as a trial litigator, city councilmember and a single father. We’re going to have a trial. A judge’s opinion. I look forward to that day.”

A State Bar status conference for Obagi is set for Jan. 30.

“The one piece of good news in this is we’re finally going to go to trial,” he said. “Hopefully by April.”

The course of events started in 2016, when Obagi represented clients Tim Cullen and Eric Dominguez for their cannabis dispensary (Valley Herbal Healing Center, Los Angeles). Cullen was the owner and Dominguez the landlord.

After the two parted ways, Cullen hired attorney Michael M. Levin to handle the settlement of Obagi’s representation of Cullen and Dominguez.

From there, the case is a question of who did or did not pay whom and when. The sum in question is approximately $957,048, meant for Cullen and Dominguez.

Count One of the charges is “Seeking to Mislead a Judge.” Count Two is “Moral Turpitude: Misrepresentation to Superior Court.”

The charges also pertain to a May 2021 complaint by Obagi, filed in the malpractice case against his former attorney, Byron Spencer Hollins, who was provided by Obagi’s insurance company.

Obagi stated in filings that Levin strong-armed him into sending all of the Cullen-Dominquez settlement balance to Levin’s client trust account.

Count Three is another charge of “Seeking to Mislead a Judge,” which is in regard to a statement Obagi submitted about the $957,048.

Count Four is another for “Moral Turpitude: Misrepresentation to the Superior Court.”

This is about Obagi allegedly being instructed to send the $957,048 to a third party, and not doing so after saying he would.

The Bar maintains that Obagi knew his statements made on the subject were false – which were that Levin was supposed to make the required payment to Dominguez, but “for unknown reasons, did not do so.”

“Levin’s conduct in this regard was negligent, careless, reckless, and indeed, caused (Obagi) significant, license-jeopardizing liability since Levin never sent the Cullen money to Dominguez.”

Count Five is “Moral Turpitude: Misrepresentation to the Office of Chief Trial Counsel.”

This stems from a statement by new Obagi attorney Erin Joyce in an August 2021 letter.

“Your conclusion that Mr. Obagi’s malpractice complaint constitutes ‘intentional acts to mislead the court and/or of dishonesty’ is nonsensical,” she wrote. “No one failed to inform the court of a “material fact” because the “fact” does not exist.”

All told, the potential penalties at stake for the city councilman include the Bar involuntarily enrolling him as an “Inactive Attorney of the State Bar.”

This would be on top of any discipline the court recommends.

In the event of suspension, disbarment or resignation with charges pending, Obagi would be subject to fines not to exceed $5,000 for each violation and a maximum of $50,000 for each disciplinary order.

The news of the Obagi charges comes after a Dec. 16  Los Angeles Times article that suggests the State Bar lets larger firms avoid discipline while the Bar comes down on smaller firms and minority attorneys.

“Small firms are the target of the State Bar, because they are easy targets. The State Legislature should be looking at this,” Obagi  said, noting that he has contacted the offices of State Senator Ben Allen and Assemblyman Al Maritsuchi about “the corrupt and inequitable outcomes that result.”

The five counts filed Dec. 29 are in addition to the seven from 2021, regarding the Cullen, Dominguez payment matter. A status hearing for all of these charges is Jan. 30.

The original seven counts are specific to the Cullen, Dominguez payment issue, while the five later charges came out of Obagi’s lawsuit against his attorney, Hollins, who handled the intended settlement with Cullen and Dominguez.

Obagi maintains that Levin said he would pay Obagi’s former clients what they were owed.

“He didn’t indicate to me in any writing that he did not pay,” Obagi said. “He contends that he told me orally. I have no recollection of that.”ER