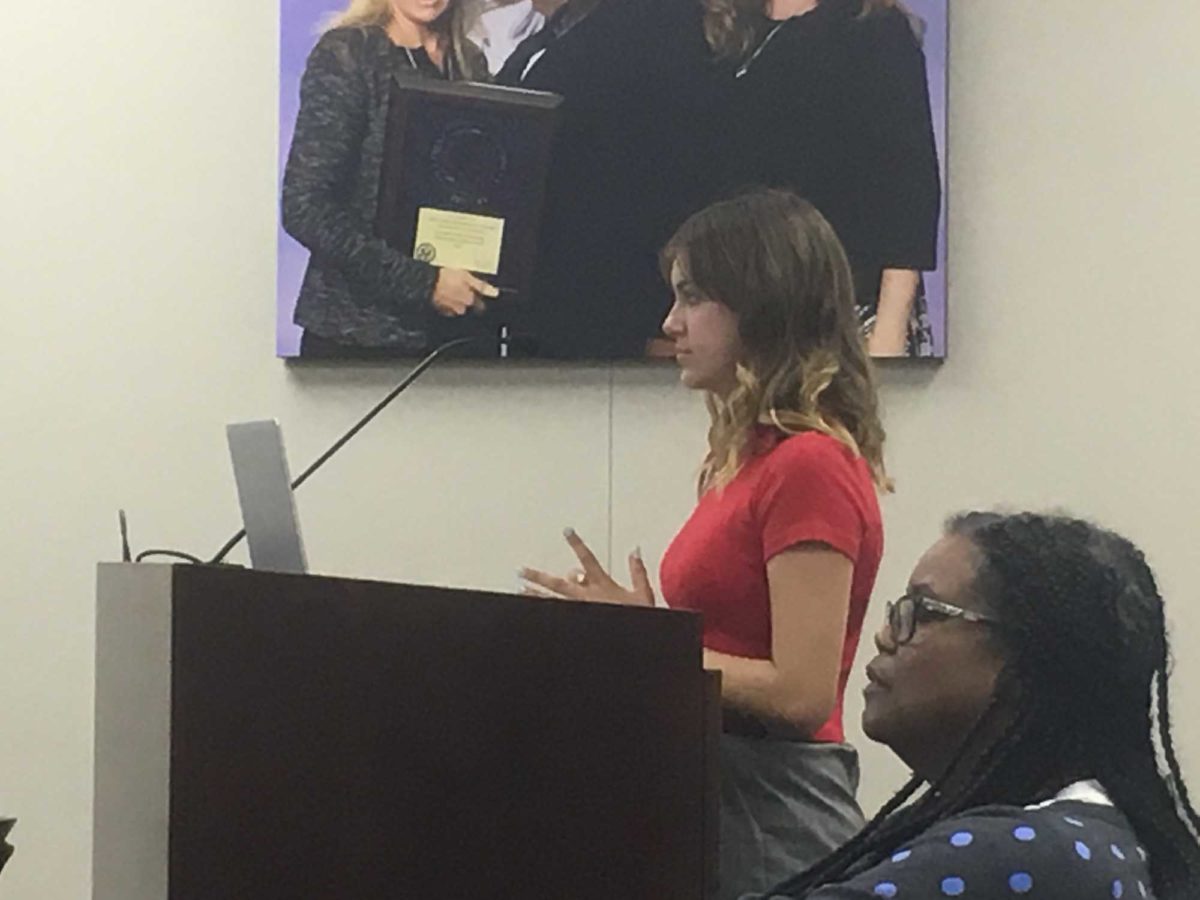 Parras Middle School eighth-grader Ava Szymanski has long taken issue with school dress codes — the guidelines that state how a student should, or should not, dress at school, as well as  punishments.

Last month she did something about it, setting up meetings with both Redondo Beach Unified School District Board Member Brad Waller and Parras Principal Jonathan Erickson. That had an immediate effect: School-provided clothing, passed out to students violating the code, would no longer obviously identify those students as rule-breakers.

On Tuesday night, she made her pitch before the RBUSD School Board to see if there were any steps the district could take in helping her make a difference.

Girls, Szymanski said, are more often set up to fail because the clothing available for them to buy often skirts against code, while the code itself is designed to police female bodies in particular.

“Girls cannot be blamed — rather than punishing us, others should be taught to not sexualize girls instead,” Szymanski said. “That can lead to feeling certain things, to thinking of themselves in a negative way.”

Szymanski pointed to two rules of a dress code shared by RBUSD’s two middle schools: One states that tank tops must be approximately one inch wide at the shoulder to “cover undergarments”; and another, which says all skirts and shorts must be at least as long as a student’s longest finger, when hands are placed at their side. Some rules, Szymanski argued, are biased against students who aren’t able to control their arm, torso or finger length.

“Buying clothes can be difficult and it’s hard to find something that works,” Szymanski said. “Girls’ clothing is smaller, shorter and tighter [than boys’] and we can’t control that.”

“The way we dress and the way we act have correlations,” Board Member Michael Christensen said. “I don’t know what to say or do about genderizing dress code… having sent four kids through Redondo schools, there is a difference.

“Boys don’t have a problem with jeans and an old T-shirt — it’s more of an issue to get them to wear clean T-shirts and jeans,” Christensen said.

What administrators can control is what students wear after being cited for violating the dress code: unflattering physical education clothing that brands the student as a “dress code violator,” printed on the shirt.

“It’s incredibly embarrassing and degrading, and you have to walk around all day in that shirt,” Szymanski said. “People say clothes students wear can be distracting, but the dress code shirt is more distracting.”

“The fact that we have shirts that say you’ve been dress-coded is personally unacceptable — we could give a blue T-shirt that says nothing and accomplishes the same goal,” said Board Member Brad Serkin.

That, however, has already been changed. In her meeting with Erickson, Szymanski suggested that students instead be given school spirit wear — school-branded T-shirt or sweats — which is  identifiable with the scarlet letter of a dress code violation.

Erickson, as indicated to the board and later confirmed by Waller, has already made that change to Parras’ policy.

Beyond that, the school board otherwise seemed reticent to take firm positions on further directing new positions on the existing policies. District-wide board policy is in place, but that hasn’t been updated in 12 years, according to Asst. Superintendent Annette Alpern. The Adams and Parras middle school codes were updated two years ago.

“I appreciate you advocating for what you believe in, but we’re just a bunch of 40-plus year-olds up here — we’re not in the schools every day, and frankly we don’t know what’s appropriate for kids to wear nowadays,” said Board Member David Witkin.

Many of the board members supported students taking part in a panel at their school sites to help redefine dress codes. However, at meeting’s end, it was unclear if those panels would take place.

Szymanski will soon be graduating to Redondo Union High School, where the dress codes are similar, though — as board members noted — not as evenly enforced, and she plans to keep up her fight if necessary.

“It’s mostly just for me to know that I can make the change,” Szymanski said after the meeting. “I’ve stood up for certain things here and there, but nothing this big before… it’s just exciting to stand up for something.”