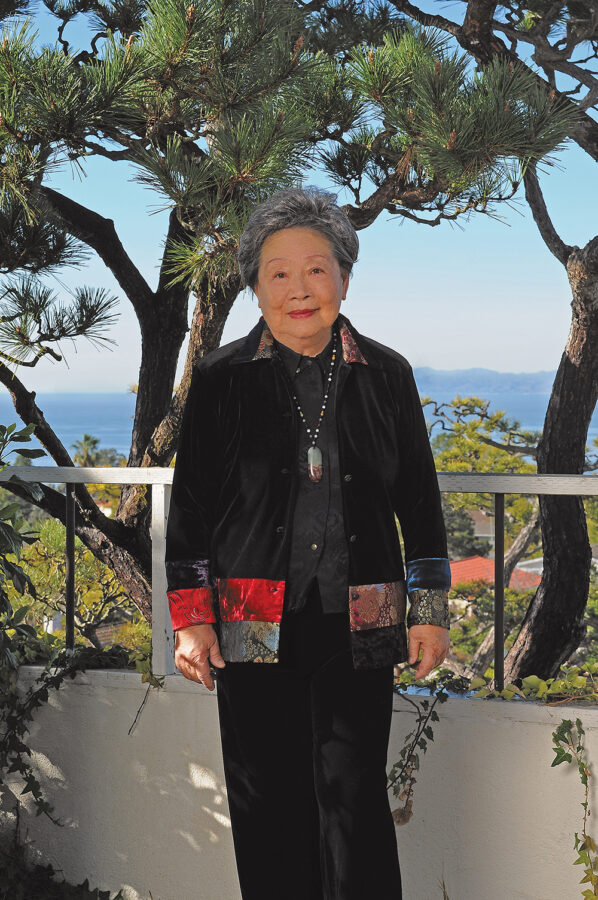 Professor Teresa Sun has led cultural exchanges on the Peninsula

Eight-year-old Teresa Chi-Ching Sun played blissfully on a bridge in China, oblivious to the danger her family faced during the Second Sino-Japanese War in 1943. The Wang family of nine had quickly packed their belongings, embarking on a perilous journey through land occupied by the Japanese army to reach a safer region of China.

The family was especially at risk because Sun’s grandfather was a well-known politician. Suddenly, Teresa plunged through planks on the wobbly bridge. Her family gasped in horror, thinking Sun would surely die in the raging Yellow River. Thankfully, she landed on a soft embankment.

“My family felt that I was blessed by Buddha — or by God—to live, to survive such a disastrous fall. Afterwards, I was always treated as the lucky child,” Sun said.

Dr. Sun’s plummet from the bridge was the first of many crises that the university instructor, author, Chinese cultural expert and community leader has survived. She credits luck. However, a steely resolve, keen intellect and “can do” spirit have helped, too.

The 85-year-old Rancho Palos Verdes resident has survived two wars—moving from city to city, first fleeing the Japanese army and then Mao Ze Dong’s army. In 1949, when Chiang Kai-shek’s Kuomintang government was poised to topple, the Wangs were among two million people fleeing China, crowding airports, train stations and harbors.

With their earthly belongings once again packed in luggage and boxes, the Wangs anxiously waited at an airport in Sichuan. Unlike that day on the bridge five years earlier, Sun, now 13, was fully cognizant of the perils her family faced this time. She recalled throngs of people at the airport — many of them Kuomintang officials and their families — surrounded by piles of luggage. An airport official bellowed, “People only, no luggage!” Sun unpacked her suitcase and donned 12 layers of clothes — the outermost, a fur coat. Next, the official drew names of the lucky ones to board the plane. Fortunately, the Wang name was called. Teresa waddled off the cold tarmac onto the first plane out of the city. Tropical heat and humidity greeted the passengers when they landed on Hainan Island, off the South China Sea. Sun was drenched in sweat.

The Wang family later settled in Taiwan. Sun said her father worked in the lowest-paid department of the government; at the end of each month there was never enough money. To put food on the table, her mother was forced to sell jewelry she had sewn into their clothes when they fled China. Soon, there were two more children to feed.

Although she did not have many material things, Sun did not want for love and affection. “My mother thought I was a most glorious child,” said Sun, who was always number one in her class in school and president of the student body in her school of 1,000 students. Many Chinese families at the time preferred boys over girls. The Wang parents showed no such favoritism. “Luckily, my parents were very progressive.”

In search of a better life, many young people from Taiwan immigrated to the United States of America from the 1950s to 1970s. Taiwan was not yet the booming economy of the last several decades. After graduating from college in Taiwan, Sun moved to America. Her boyfriend Terry Tseng-Yao Sun— who later became her husband — had immigrated to the US two years previously. In 1959, Sun travelled by propeller airplane from Taiwan to Guam, Japan, Hawaii, and finally San Francisco. “My first impression of America was that it was big, beautiful, modernized—and, of course rich,” Sun said. Squeezed into one of her suitcases was the fur coat she wore on that plane out of China years before.

Sun was accepted into the University of Southern California but could not afford the tuition. “We came here with empty pockets. Money was very hard,” Sun said. But once again, luck shone upon her. She received a scholarship to Immaculate Heart College in Los Angeles, and was given a job in the cafeteria. “It was a good experience. My English was very poor, but I was a very hard worker.”

Since the cost of an international phone call was prohibitive, snail mail was the only communication available for those separated from their loved ones. After saving money for two years, Sun finally was able to call her mother in Taiwan. During that phone call, they could barely talk through their tears, their longing and separation so painful. 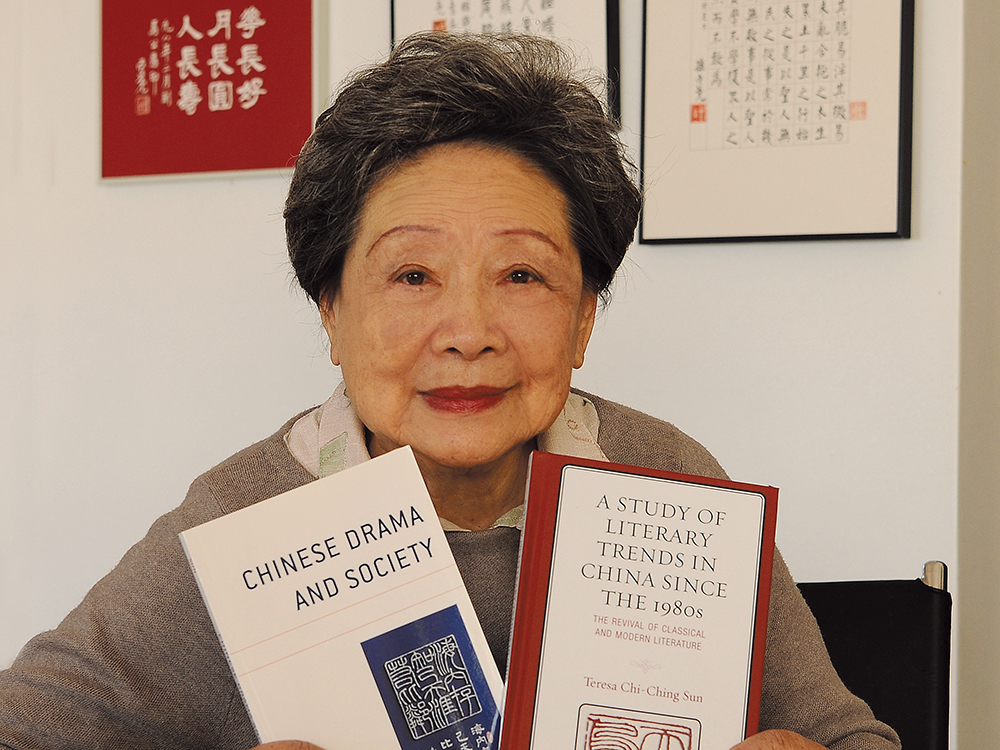 Teresa Sun with two of her books, both published in 2020. Photo by David Fairchild

A love of literature

When Sun’s family lived in Hangzhou, China, in the late 1940s, three famous bookstores dotted the neighborhood. Sun would spend hours at these literary havens, devouring Jane Austen, Alexandre Dumas, William Shakespeare, and other classics. Although the books were in Chinese, their words were universal and permeated Sun’s soul. They propelled her to pursue a lifelong study of literature. She earned her undergraduate degree in Chinese Literature in 1957 from Taiwan Normal University and a Master of Arts in Education from UCLA in 1964. At 50, Sun started her doctorate program at Seton Hall University. She finished her course requirements in three years and then taught at Whittier College as an adjunct assistant professor. At 60, her Ph.D. thesis was approved, and Sun earned her doctorate in 1995.

Sun has authored numerous academic papers and taught Chinese language, literature and drama at the University of Southern California, the University of Irvine at California, and other campuses. Last year, she had two new books published: “Chinese Drama and Society” and “A Study of Literary Trends in China Since the 1980s.”

Teresa and her husband Terry moved to Palos Verdes in 1971. The Hill was predominantly Caucasian, but it was changing as more families from different ethnicities were moving to Palos Verdes. Well-known community leader Janet Baszile has known Sun for over 20 years. Baszile founded and chaired the Multicultural Committee of the Community Association of the Peninsula, a volunteer group that worked to identify community needs.

“We wanted to celebrate diversity. Teresa was one of the first people who knew that multicultural gatherings were a way of introducing the community to itself,” Baszile said. Baszile remembers Sun volunteering to head the Asian initiative for the Multicultural Committee. Sun organized multiple events featuring Asian music, opera, dance and costumes on the Peninsula.

“Teresa has extensive influence in the Asian community, which she is willing to tap into,” Baszile commented. “She is so respected by people in that community and has a wealth of knowledge and information. She was willing to share her energy and talents with our committee and the entire community.”

Julie Moe-Reynolds, executive director of the Palos Verdes Center for the Performing Arts, has known Teresa since 1988. Julie’s parents Joan and Dick Moe spearheaded the establishment of the Norris Center and the Harlyne J. Norris Pavilion in Rolling Hills Estates. As a youth, Moe-Reynolds fondly remembers attending Asian cultural events that Sun brought to the Norris.

“The Norris’ goal to raise cultural literacy through the performing arts and musical programs perfectly dovetailed with Chinese culture. My mother often commented on how Teresa was a ‘fireball of energy,’” Moe-Reynolds said. “Teresa was committed to bringing the different cultures together on our Peninsula and into our Norris Theatre. Teresa spearheaded many Festive Feasts, dinners that focused on specific cultures using artifacts, live music and informal discussions that were centered around the Norris.”

Recent US-China relations have dismayed Sun. She said the two countries had developed a warm, friendly relationship over 30 years. Sun emphasized the world is so interconnected by jet travel, international trade, and instant communication that the two countries cannot suddenly isolate from each other.

“China has improved economically. In a survey 80 percent to 90 percent of the people there favor the government because their life has improved,” Sun said. “We should turn around and try to work with China.”

Service to community and family

In 1989, Sun became the first Asian American elected to public office on the Peninsula, when she became a trustee for the Palos Verdes Library District. She served until 1993. The South Bay Volunteer Center named Sun a Legend of the Year in 2014. Additionally, she has been a board member of the Norris Center for the Performing Arts and president of Help the Homeless Help Themselves.

In 2004, Sun’s husband Terry was diagnosed with Alzheimer’s disease. He had been an engineer, and  became an accomplished Chinese calligrapher in retirement. Sun took care of Terry in their home for 10 years. “Of course, it was very hard, but we enjoyed life together.” She described Terry as her “gen ii,” or true love. Since Terry loved to eat, Teresa and her husband enjoyed five cruises in 2014. Teresa gave talks on Chinese culture on the cruises. Terry died in 2016.

People frequently ask Sun why she stays so active writing college textbooks, academic papers and four page missives to the New York Times. Her response: “I think my mind is very busy. I’ve lived through two wars and I feel that I am still alert. Even today, I can face any disaster; I’m not afraid and have no regrets. I am very lucky.” PEN