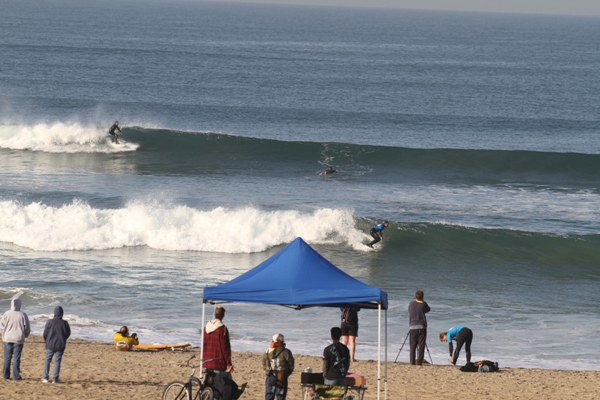 El Porto’s exposure to both north and south swells gives it a consistency that makes it a favorite location for contests. Photo by Mike Balzer

The best surfers are also the best at reading ocean conditions. Deciphering the ever-changing variables of tide, wind and swell is an art form that is acquired over time. However, if you have a basic understanding of our local breaks, it can make it easier for you to find good waves. To help you on your quest I’ve included general characteristics of our nearby spots:

El Porto: “Porto” is usually a foot or two bigger than surrounding beaches because of a submarine canyon and an outer reef system that focuses swells here. Waves tend to break further off the beach and it is common to see strong riptides. These rips often create deep spots in the ocean floor, which can lead to great surfing conditions. El Porto also boasts a large swell window, Everything from a 180 degree south to a 300 degree Northwest can get in here,  making it one of the most consistent and crowded spots on the coast. Parking also draws the crowd

Manhattan Beach: North Manhattan breaks similarly to El Porto, but is usually a touch smaller.  However, the lack of parking means it’s often easier to get good, uncrowded waves. The coastline bends slightly to the south around Marine Street, making this stretch of beach more south-facing thus a bit smaller on a northwest swell, but bigger than nearby beaches on a south swell.

Hermosa Beach: The Palos Verdes peninsula and Catalina Island block most south swells from getting into this stretch of beach. Waves here tend to break closer to shore and pack a lot of punch. The area from north of the pier to about 24th Street has an outer reef system that focuses swells from the northwest. The biggest of those swells will actually break on the outer reef, called Cable Cars, about one-third of a mile offshore. Unfortunately, the typical beach break waves are often walled, so it’s best when there is some type of short period energy breaking up the lines.

Burnout / The Avenues: The waves here break very close to shore and feature quick, intense rides.  Accordingly, it’s common to see more body boarders in this area than any other spot in the South Bay. Generally, it is smaller here than neighboring beaches, but on a big, northwest swell this area can be all-time. Topaz loves a big northwest with a touch of wind swell and Burnout can transform to big, heavy barrels on a solid winter swell. Pros from other areas have been known to travel here when the conditions are right.

Chris Brown is the executive director of Campsurf.