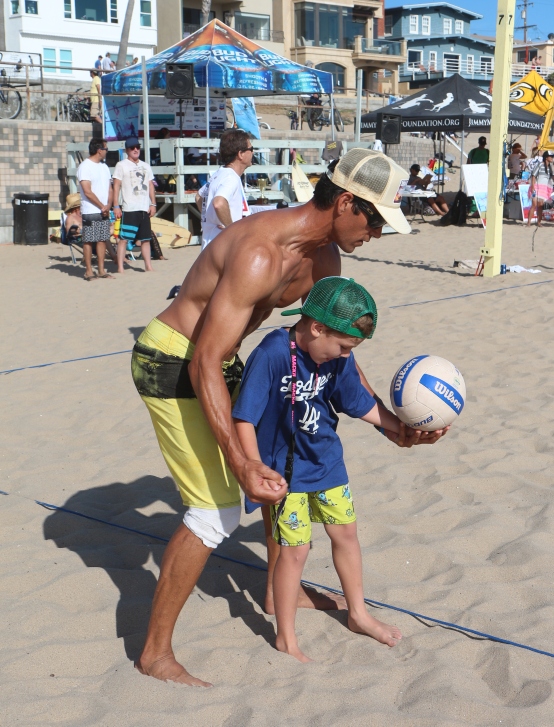 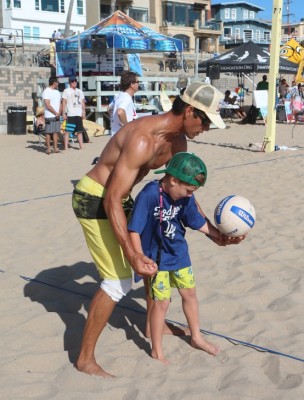 Jim and Nancy, along with their youngest son Jeff and family friends, founded the The Jimmy Miller Foundation in 2005, one year after their oldest son Jimmy died as a result of mental illness. 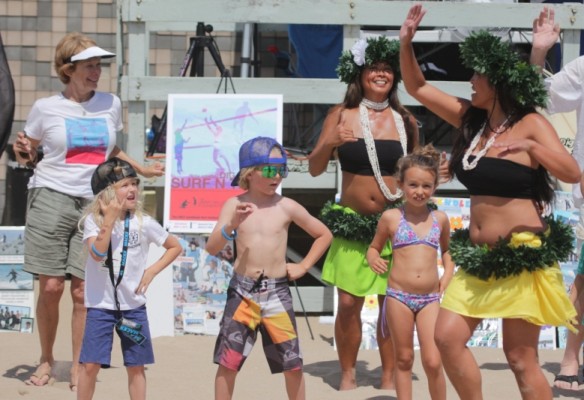 Fonoimoana and Jimmy Miller grew up in Manhattan Beach surfing together and were classmates at Mira Costa, where they played on a championship volleyball team in the mid-80s. Fonoimoana pursued volleyball. Miller traveled the world surfing before becoming a Los Angeles County beach lifeguard and founding Camp Surf, the City of Manhattan Beach’s official surf instruction camp.

Each spring their spirits reunite during the Dig 4 Jimmy Surf and Turf fundraiser, which benefits their respective charities and celebrates their dual passions. 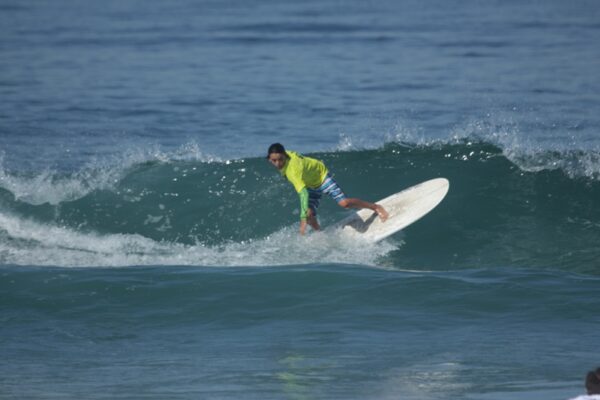 Ethan Ward led his team to first place in the surf division, and first place, overall.

Last Saturday’s Fifth Annual Dig 4 Jimmy Surf and Turf at the Manhattan Beach pier teamed some of the South Bay’s top surfers and not so good volleyball players with some of the area’s top volleyball players and not so good surfers on four- and five-member teams, each with A, B, C and D players.  The competitors ranged in age from eight to old and from no experience to one Olympic gold medalist.

In the morning, the 16 teams competed in 30 minute surf heats. Each team member was required to stand up on at least one wave. The small, consistent surf favored the groms, who gleefully showed up their mostly longboarding elders. 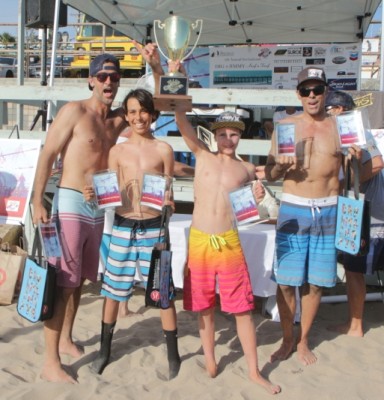 In previous years, Fonoimoana’s teams have never reached the volleyball finals, largely because he restricted his play to setting and not blocking or hitting.

But this year, in Fonoimoana’ team’s first match, California Beach Volleyball Association president Chris Brown spiked a ball at Fonoimoana that fell to the sand. Then Brown made the mistake of gloating. After that the Olympic gold medalist played like a gold medalist despite the need to simultaneously coach his teammates — a mortgage lender, a website designer, a newspaper publisher.

and an eighth grader. The coaching required a firm pep talk when two team members were late for the finals because they were celebrating their horse’s Kentucky Derby victory at the Shellback Tavern, which in their defense, is hollering distance from the Manhattan volleyball courts. The pep talked worked. Fonoimoana and teammates Greg Knoll, Jay Gleason, Jake Johnson and Kevin Cody crushed middle schoolers Ward and Kuhr, who were teamed with Ward’s dad John and Jeff Bowers in the volleyball finals.

But by virtue of their first and second place division finishes, the Wards, Kuhr and Bowers team won the overall championships.

Dig 4 Kids assists over 5,000 low income students annually in Carson, Hawthorne and Venice with volleyball coaching at the elementary and middle school levels and coaching, uniforms, equipment and scholarships at the high school level.