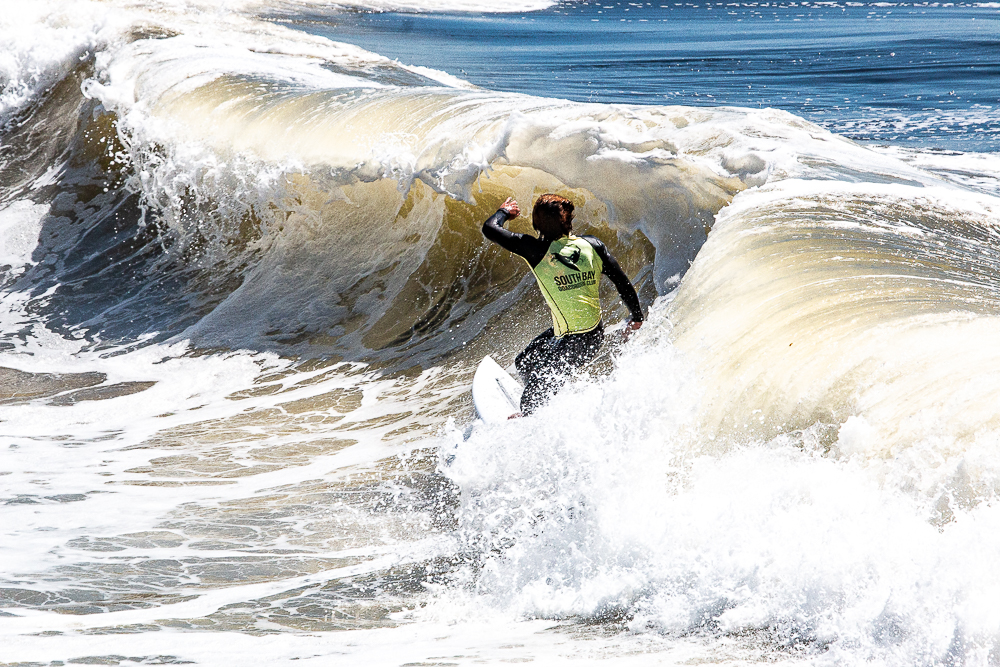 Big Frothy closeouts tested surfers commitment during The SB Boardriders/Waterman's Surfer Walk of Fame Weekend contest. Photo by Kevin Cody
Two years after being named to the Hermosa Beach Surfer Walk of Fame, the 2020 inductees finally received their bronze plaques, which will be installed on the Hermosa Beach Pier. In their acceptance speeches, during Saturday mornings induction ceremony at the pier, recipients Nick Christensen, John Teague, and Charlie Quesnel spoke as appreciatively as they might have if their  awards had just been announced. The only mention of the pandemic was to explain the absence of Josette Lagardere, who grew up in Redondo Beach, but now lives in Queensland, Australia. Peter Towend, professional surfing’s first World Champion, who is from Australia, accepted Lagardere plaque on her behalf. Friday night, the Hermosa Beach Historical Society hosted a party at the Historical Museum for the new and previous inductees. Following the party, guests moved to the Community Theater, where the South Bay Boardriders presented their annual surfing awards, and high school senior scholarships. The awards presentations were  followed by filmmaker Brad Jacobson’s “Tomorrow should be good,” a film about the recent winter surf.

Saturday morning, prior to the Walk of Fame inductions, the South Bay Boardrider and Waterman’s hosted a surf contest on the south side of the Hermosa Beach Pier. Following the inductions, Spyder Surf and Sky One Federal Credit Union hosted a music concert and surf fiesta. ER