Taking it to the streets 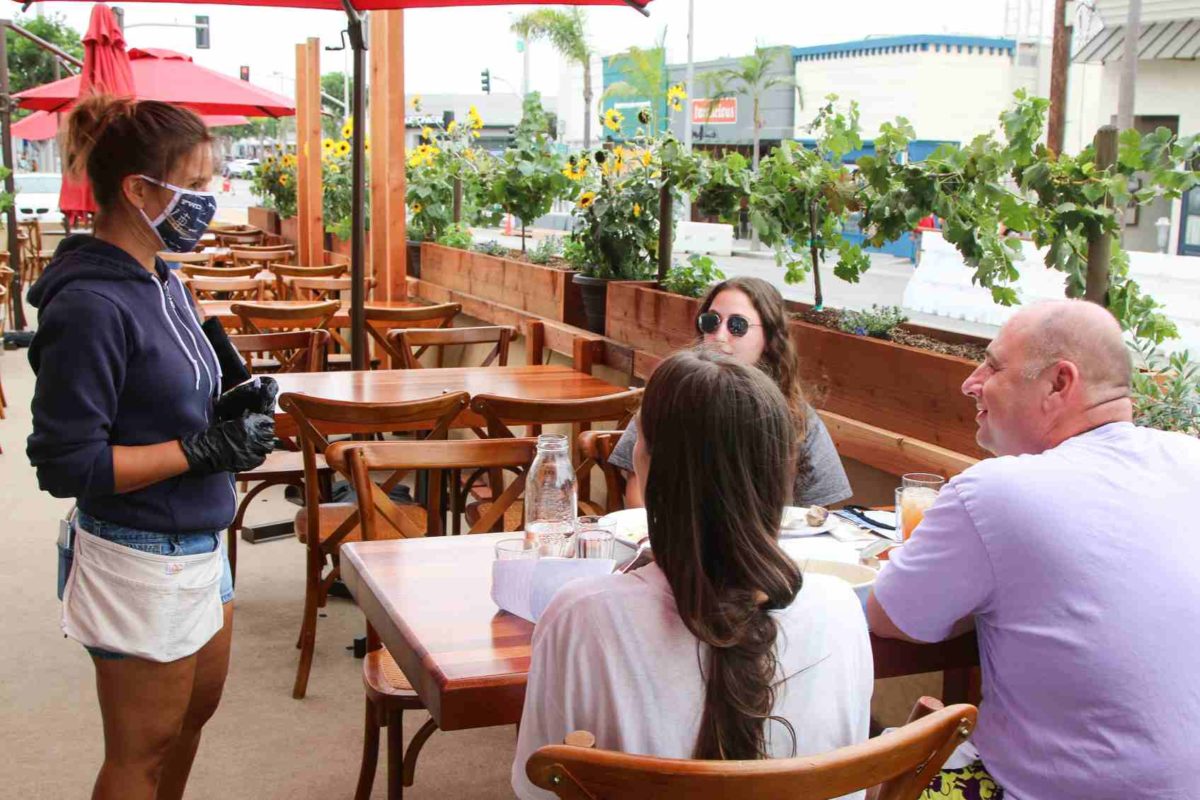 Manhattan Beach’s downtown has always had a different character than the other beach city downtowns, in part because of topography. Unlike Hermosa Beach and Riviera Village, which boast wide streets in a flat area, Manhattan’s roads are narrower and the ones leading to the beach are steeper. This has created the unlikely situation of a town that is famous for its beach having only one restaurant with more than a sliver of an ocean view, the Strand House.

Even where the view isn’t the major attraction, there are fewer restaurants with patio or other outdoor dining space, because dining spaces are generally smaller, in older buildings that resist remodeling, and face narrow sidewalks. Compare this to Riviera Village, which has almost no restaurants without outdoor spaces, or to Hermosa’s Pier Plaza, and you get a sense of how the towns to the south have made the most of their natural advantages.

That disparity has changed with the adoption of dining spaces in the streets in Manhattan Beach, a development that would have been inconceivable six months ago. Had you suggested to the city council then that a substantial portion of scarce street parking be replaced by patio dining, you would have been greeted with outrage or amusement. It’s only possible now because of two factors: the restaurant trade that is so vital to downtown would have been extinguished without it, and the city will have a much smaller tourist rush this summer. Fewer visitors looking for parking means more space for amenities for the travelers who do make the trek, as well as those of us who actually live here.

The transformation of our streets has been startling, particularly at those places where management has creatively arranged their spaces. At the Arthur J, FWD, and MB Post, the barriers between street and patio have been decorated with fabric coverings and window boxes full of plants, and on those patios potted shrubs and umbrellas create a garden atmosphere. A manager named Tracy at MB Post said that as a result of that patio they have had no net loss of seating, despite regulations about personal distancing.

“The outdoor patio is the difference between profitable and not right now, and it has taken some effort but it’s worth it. We took 50 percent of the tables from inside and made them come to life outside. A majority of guests who have dined with us on the patio enjoy the serene nature of it, so while it is a different ambiance, it’s a nice change. Obviously when the weather is gorgeous, the patio sells itself. We have guests who have reserved an indoor table, and once they see the patio, they request outdoor. We can’t accommodate them all because we have a limited amount of tables, but it has been more popular than the dining room. There are a few challenges because those tables are further from the kitchen, but we’re working it out.” 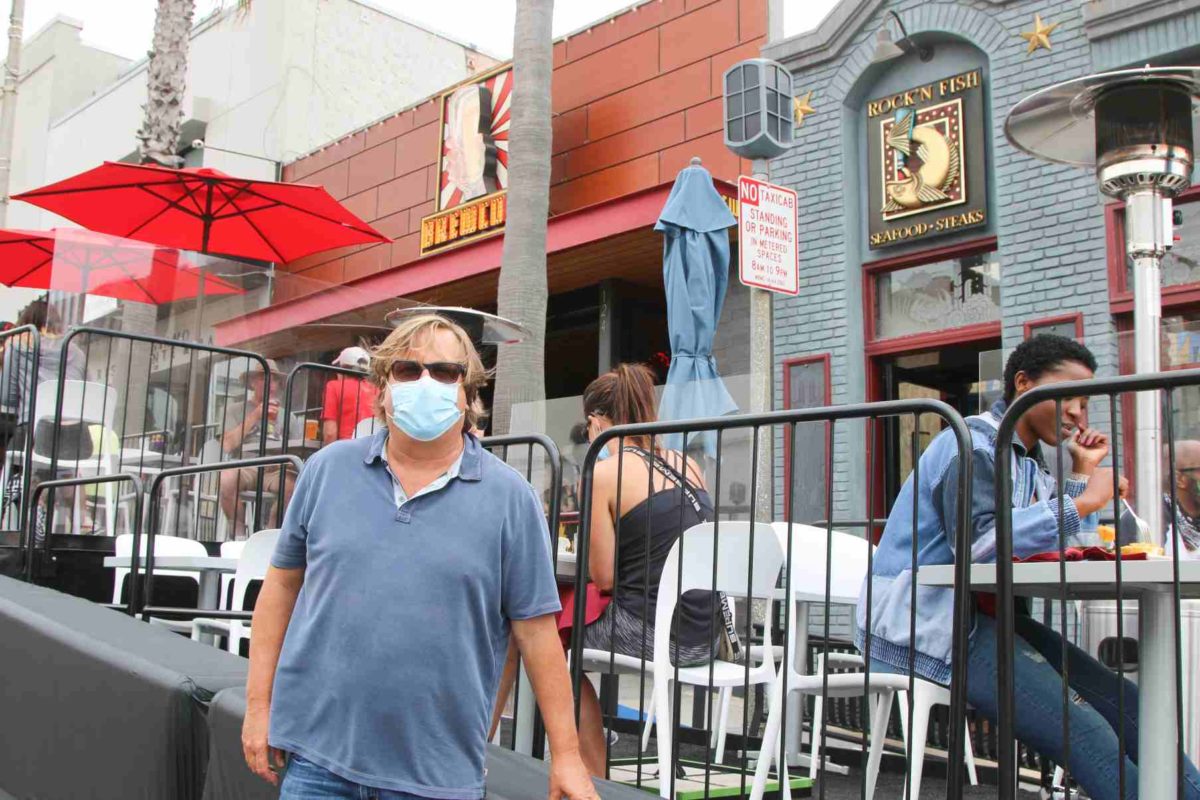 While MB Post has been able to maintain their usual capacity, they had the advantage of a long frontage along Manhattan Avenue. Other restaurants that had narrow but deep spaces or are next to corners and need to leave room for vehicles to turn haven’t been so lucky. Slay Steak and Seafood has an outdoor space under construction that is oddly shaped thanks to adjacent parking spaces and an alley so will probably add only about a dozen seats. Other restaurants are net winners; Fishing With Dynamite, which can accommodate only about 30 people inside and is usually packed, has almost doubled their seating, and Manhattan Pizzeria has gone from a few cramped barstools in the back to having a substantial deck outside. That business was generally regarded as being in trouble during the takeout-only phase when the beach was closed, and local residents organized efforts to save the local landmark. Now, a manager says that they’re doing well. 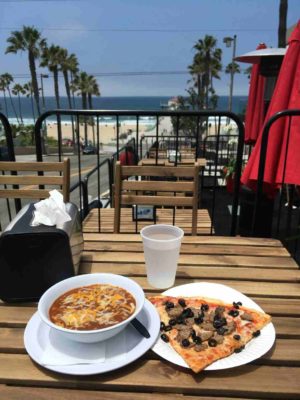 Diners at Manhattan Pizzeria now have a view of the pier and the ocean. Photo by Richard Foss

“The outdoor service is new, but so far it has been great for us — not a lot of people were coming in. I think the outdoor patios are going to help everybody. People will try it once for the novelty, and they’ll come back because they like the experience of having a pizza with a view of the pier.”

That pizzeria isn’t the only one to suddenly have ocean view tables, because Mangiamo, Rock’NFish, and Strand House have also invested in dining decks. The result is very European, and on a Saturday night there was an undeniable energy to the street-life that had been missing. I talked with the person standing at the end of a long line to enter the Shellback, a cheerful fellow who didn’t give his name. He had a bandana handy but wasn’t wearing it, and he waved it at one point to accent a comment about the way that things have changed.

“I’m pretty new to California, but this place is always happening and we like the old town feel of this whole area. We like the dive bar atmosphere, and tonight we’re mainly here for beverages. It’s worth standing in line for a while to be able to enjoy this… it won’t be exactly the same as it used to be, but it’s a lot more fun than another night in my living room watching a screen.”

Figuring out how the bar scene will work is on the minds of everyone who has a liquor license, and on this particular evening various restaurants were handling it in different ways. At Shellback people were still standing around and drinking companionably but with an unusual amount of space around them. Like just about every other restaurant in town, the place looked half-empty when it was full to capacity. Other bars were even more cautious. Nick’s at Metlox was seating parties of one or two at the bar with vacant spaces on both sides, and the scene was similar at Love & Salt. The Arthur J was still serving cocktails but had taken all of the stools away from the bar so people couldn’t congregate there at all.

Based on conversations with managers and owners, the different strategies are part caution on the part of the owners, part based on an evolving understanding of how much proximity their customers really want. Some customers are obviously ready to resume partying where they left off, while others feel brave to have left their house at all. I found spokespersons for a middle ground attitude the next day in Victor and Stephanie, who moved to Manhattan Beach just before the lockdown and were enjoying lunch on the patio at Manhattan Pizzeria.

“I like it here,” he said. “We can stay outside and everybody’s not so close to each other indoors. I’m not ready for the bars, not yet. For months getting out of the house has meant going for a walk or something else comparatively solitary, and this is a step toward normal interactions.”

“I think everybody’s ready to come out, because they’ve been a little stir crazy in their houses,” Stephanie agreed. “If they’re not comfortable and feeling safe, they’re not going to come.”

The patios and decks are being built as quickly as the city approves permits, including in some spaces where they seemed unlikely — like often-congested Highland Avenue. I asked a truck driver who delivers to local restaurants whether this was likely to make things more difficult, and he said, “If they narrow the streets much more, what are they going to serve? Whatever it is, they’re going to have to pick it up, because we won’t be able to get it to them.”

Logistical difficulties aside, these spaces are already popular and are a financial lifeline for restaurants, though they are currently intended to be temporary. If they are popular, the city may have to reconsider removing the current plan to remove them at the end of summer. One operator who asked not to be named said that there will be no reason to remove them in fall, because the need for street parking will decline, and local customers who enjoy outdoor spaces may go elsewhere if they are removed.

Tracy at MB Post said, “I think that [outdoor dining in street spaces] is here to stay, because by September it will be part of the community.” Asked about whether he thinks the outdoor spaces will remain in place, Patrick Kuh of The Arthur J diplomatically said, “That’s a question about politics, not about whether people would actually like it to continue. I know we’re very glad to have it, and it contributes a lot to the environment of Manhattan Beach.”

However that scenario plays out, there is likely to be little visible change at the only longtime restaurants in town that haven’t added outdoor dining. That’s because The Kettle and Uncle Bill’s already had it, and they can relax and keep serving under the sky while their competitors figure out how to make it work. For decades a part of the California lifestyle has been that love of the outdoors, and it’s an open question whether Manhattan Beach will embrace that as fully as our neighbors to the south. ER