“The Intouchables” will touch you 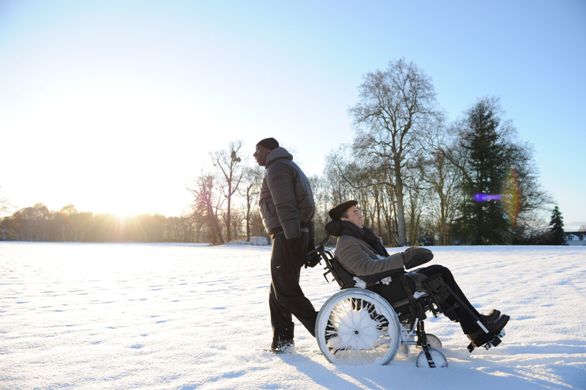 Omar Sy as Driss and Francois Cluzet as Philippe in “The Intouchables.” Photographer: Thierry Valletoux

“The Intouchables,” begins on an incredible release of adrenaline as a Maserati careens through the tunnel roads of Paris and comes up for air as the black driver is surrounded by police, rousted from the car and is about to be roughed up. They demand that his passenger get out of the car immediately. That passenger is the very white, very wealthy Philippe, a quadriplegic, and the employer of Dris, the young black man. Explaining that he was on his way to the ER because Philippe was suffering a seizure, the police relent and instead give them an escort to the hospital. And in an eye blink, this film turns 180 degrees from the drama you think you’re watching to the comedy it is because the whole scenario was a bet between Philippe and Dris as to whether Dris could lose the police or, when caught, could make the cops complicit in their game. Dris wins this one, but if you go to see “The Intouchables,” you’ll be the one to win because it’s exhilarating, funny, heartwarming without maudlin sentimentality and has many more surprises in store.

Based on a true story, “The Intouchables,” by the writing-directing duo of Olivier Nakache and Eric Toledano tells the tale of Philippe, a wealthy quadriplegic needing a personal caretaker who, out of boredom and/or amusement, hires a totally inappropriate and inexperienced young man from the projects, Dris, who was sent to the interview seemingly in error. Gauche, rude, inattentive and totally unimpressed with Philippe’s condition, his hiring is the first of many bets Philippe makes to keep things interesting. But Dris, whose only intention was to get a signature on a form to prove he was unemployable in order to receive welfare benefits, is seduced into staying the moment he meets Philippe’s secretary and sees the bedroom with attached bathroom that he will be able to call his own.

And so begins a bromance of the first order. Oil vs. water, Bach vs. Earth Wind and Fire, sushi vs. fish and chips – this is the relationship of Philippe and Dris. What ensnares Philippe is Dris’s total lack of pity. Dris is the “why not” to the question of “why.” No one has treated Philippe in such a way since his accident. No more wheelchair-outfitted van for Philippe, as far as Dris is concerned, only the Maserati will do. Exposure to one another opens each to worlds they didn’t know. Dris is too unfiltered to respect boundaries so life with Philippe truly becomes a two way street.

The script is amazing, the direction is crisp and smart but it is the acting that propels this Maserati of a film forward. François Cluzet, star of the international hit “Tell No One”, is one of the most sympathetic actors on the planet. His eyes sparkle, his smile warms a room in winter, his frown is the hell that freezes over, his brow can raise in hope and lower in anger and the shape of his mouth easily conveys his mood, all necessary when playing the role of a man whose only remaining living organ is his brain. Aloof as befits his stature in life, Cluzet’s Philippe has no room for pretense and is tired of eliciting pity, the lack of which is what drew him to the street-wise Dris. Cluzet’s unselfish rapport with Omar Sy, Dris, is one of the important driving forces of the film because Dris is no Sancho Panza to Philippe’s Don Quixote. Dris is an equal who relates to Philippe simply as his friend, not as a man of woeful countenance and not as a blueblood above Dris’s pay grade, even if he is.

And it is this relationship that drives Omar Sy’s superb performance because when he is on camera, he is the story. Sy portrays Dris as joy unbounded despite his own complicated circumstances and the mistakes he’s made in the past. He is Earth Wind and Fire to Philippe’s Vivaldi. Their references are dictated by their circumstances. For Philippe Berlioz is the great French composer of the 19th Century; to Dris Berlioz is a housing project in the slums of Paris. Sy is the force of nature to Cluzet’s rarified air and it doesn’t take much to see which style will dominate. As you watch them pull back and forth you’ll be swept up in their growth and that of everyone around them as Dris metamorphoses from manchild to adult and Philippe reclaims his manhood.

Amazed last winter to learn that Jean Dujardin, who won the Academy Award as best actor for “The Artist,” lost the César to Omar Sy in “The Intouchables,” I was certain that it was a French reaction against the American award. Now that I’ve seen Omar Sy’s performance, I know that I was wrong. Sy deserves every accolade possible and, it is hoped, the Oscars will recognize him as well.

The cinematography deserves special mention. Paris, filmed beautifully from the projects to the Eiffel Tower, is as much a co-star of the film as is the music. An alpine scene underscored by Nina Simone’s rendition of “You Know How I Feel,” a beautifully plaintive song filled with irony, is one of the best moments of this or any film.

Don’t miss this exhilarating film for any one of a number of reasons but if there’s one reason it’s the extraordinary relationship of the two characters as brought to life by two amazing actors, François Cluzet and Omar Sy. “The Intouchables” tells the story of two men who are more than the sum of their parts.

Opening May 25 at the ArcLight Hollywood and the Landmark Theatre. In French with English subtitles. Neely also writes a blog about writers in television and film http://www.nomeanerplace.com ER.