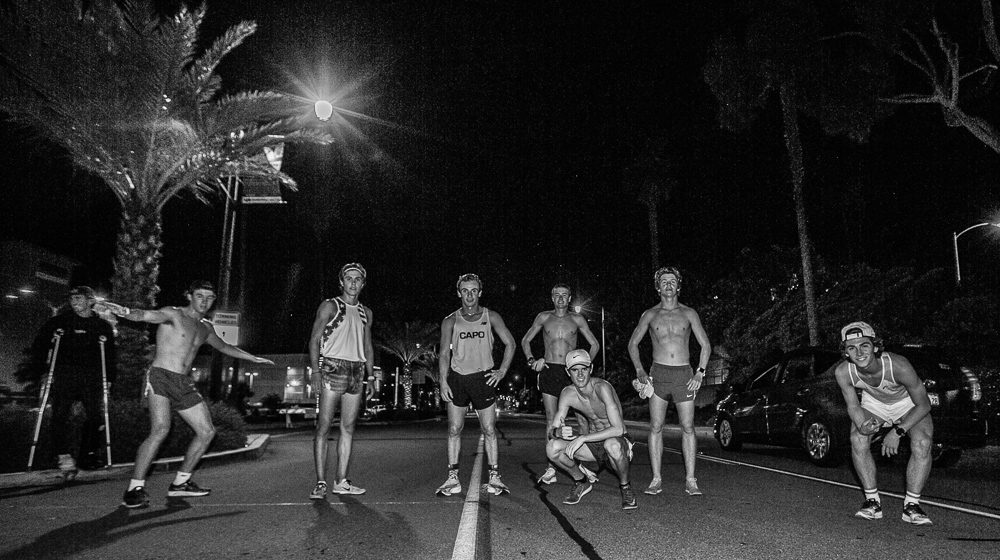 The solitary sport of running surges in popularity. Mira Costa High track coaches hope it will out run the pandemic

Last Friday, the Bay League High School Track and Field Finals were to be held under the lights at the Redondo Union High Sea Hawk Bowl. For most of the runners, the finals would be their last track meet. For top runners, like Mira Costa senior miler Billy Atkinson, league finals would be a last chance to set a school record and catch the attention of college coaches.

Atkinson was on course to break Mira Costa’s 1600 and 3200 meter records, both set two years ago by Xavier Court, now a runner at UC Berkeley. Court broke the previous 3200 Mira Costa record set in 1981 by Billy’s dad Jeff.

“Most track records are set at night,” according to Jeff Atkinson, whose 3:55:16 mile at Stanford in 1986 is still the school’s record. Two years later, at a pro meet in Zurich, he ran a 3:52.80 mile, just five seconds off the then world record. In October of that year, he represented the U.S. in the 1500 meters at the Seoul, South Korea Olympics, finishing 10th. His fastest runs were all in the evening. “We don’t know why evenings are faster. Maybe it’s because runners have all day to rest, loosen up and fuel their bodies. Maybe it’s because night meets draw bigger, louder crowds,” he said.

Atkinson is the assistant track coach at Mira Costa. But Friday morning, instead of preparing Billy and Billy’s teammates for the Bay League Finals, he and Mira Costa women’s assistant track coach Annie Seawright-Newton were walking off a one-mile road course. The Bay League Finals, like all high school athletic events, was canceled in late March, following the school closures, to slow the spread of the coronavirus. Since then, high school coaches have been prohibited from physically meeting with their athletes or organizing practices.

“Fortunately, the streets are still open and running doesn’t require a field or equipment,” Atkinson pointed out. There are no CIF rules against marking off a course.

Atkinson is known for creative coaching. In 1998, he began taking Mira Costa runners to Mammoth Lakes Basin for summer training. In the decades since, the camp has been commonly mentioned by Costa runners as their favorite high school experience.

“Running is what other sports do for punishment. So I try to make it fun” Atkinson said. 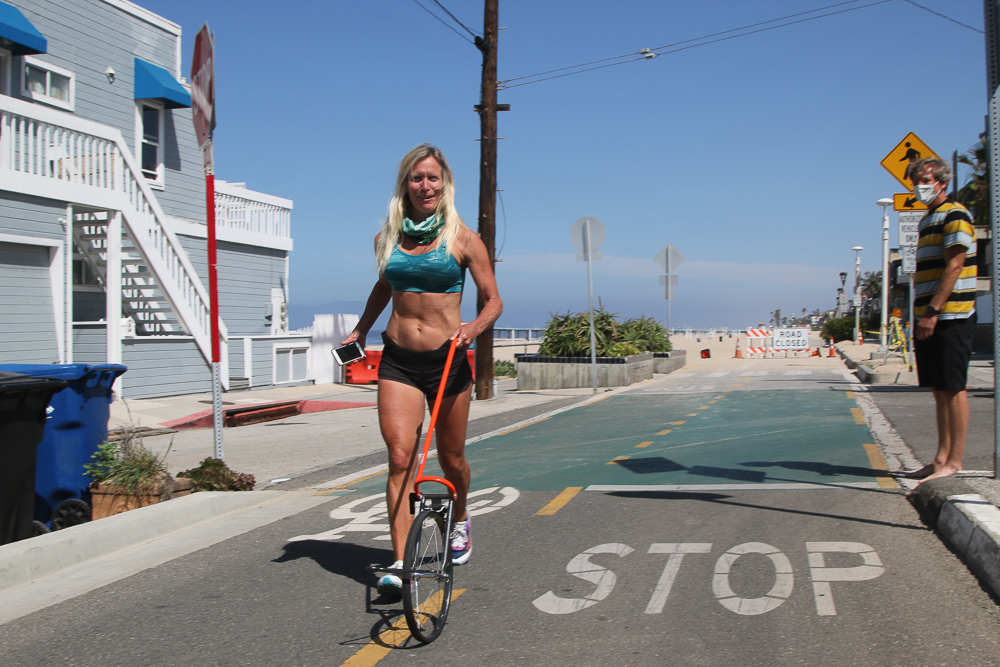 For the one-mile road course, Atkinson and Seawright-Newton chose a relatively straight, lightly trafficked stretch of Hermosa Avenue. They started at the Hermosa Beach/Manhattan Beach  border, in front of the Strand house made famous by Beverly Hills 90200 and walked south, pushing a measuring wheel normally used to measure cross country courses. The mile mark, according to the wheel, was 15th Court, which was a relief to Atkinson. Another 100 feet and the mile would have ended at 14th Street, which has a traffic signal.

“You don’t want a road course that ends in the middle of a major intersection,” he said.

Atkinson and Seawright marked the mile on the asphalt with blue masking tape.

Then they uploaded the course to Strava, a runner’s app that records times and routes and posts results for sharing with teammates and coaches. Mira Costa’s Strava groups are Mira Costa Middle Distance and Mira Costa Long Distance. One of the benefits of Strava during the pandemic is it allows runners to compete against fellow runners while running alone.

That evening, at 5 p.m. when the Bay League Finals would have begun, Billy Atkinson lined up alone at the Hermosa/Manhattan boundary on Valley Drive. He took off running south, looped through Valley Park, then continued south to Catalina Avenue and the Esplanade to Avenue D in Redondo Beach and ran back. As he ran the 8-mile course, his pace and location were posted to the Mira Costa Strava accounts. The next morning Billy Atkinson rode his bike to 18th and Valley in Hermosa Beach, where he met up with Costa teammates Alex Fiorito, Cormac Carew, and Thomas Velvin. 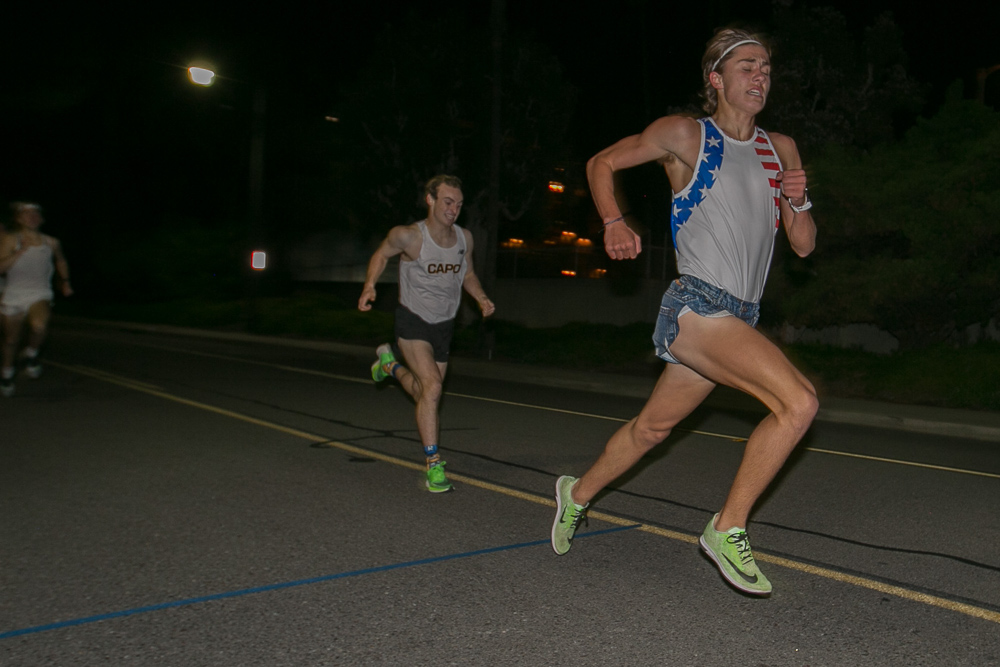 A few nights earlier, Velvin had a breakout race when he defeated Billy Atkinson and West High’s Jake Parker in a race they dubbed the South Bay Road Mile. During the season, Velvin  was the bronze medalist to their silvers and golds. Last year, Parker finished 9th in the state in the 1600.

The South Bay Mile started in front of Comedy and Magic Club in Hermosa Beach and followed Hermosa Avenue and Harbor Drive to the Cheesecake Factory in Redondo. Like the Hermosa mile, it followed a relatively straight, lightly traveled stretch of road that allowed the runners to race socially distanced.

Saturday morning, when they met at 18th and Valley Velvin and Carew were also on bikes. The three on bikes were there to pace Fiorito during his first marathon attempt.

They took off south, at 5:41 a.m., toward Redondo Beach, following the flat course Atkinson had run the previous evening. They continued past Redondo to Dolphin Park, at the base of the Peninsula. There they turned up Palos Verdes Drive West, a steep, 300-foot elevation gain, and followed the divided Eucalyptus-shaded road along the coast to Point Vicent Park, just past Hawthorne Boulevard.

Then they looped back to Hermosa Beach, finishing on Hermosa Avenue, at the start of the one-mile course coaches Atkinson and Seawright-Newton had marked off the previous morning.

“What a beast,” Billy Atkinson posted on Fiorito’s Strava account that evening.

“Huge thanks to Bill, Thomas and Cormac for biking the whole way with me, which really helped me grind out those last neg split miles. I went way faster than I thought I would,” Fiorito  responded.

Mira Costa head track coach Rene Williams-Smith was amazed when she saw on Strava that Fiorito had run a marathon.

“That’s not something he would have done a month ago. During track season he was training for the two mile,” Williams-Smith said. She has been coaching Costa track since 2004. Her connection to Costa track goes back to her junior year, in 1977, when she became the first female to run cross country on the previously all male team. The following year she accepted a full ride to the University of Kansas.

Since school closed, Williams-Smith has posted workouts on Strava for her runners. But they didn’t include marathon training.

“Alex did that entirely on his own. He upped his mileage, but still, for not a lot training a 2:48 is very impressive,” Williams-Smith said.

The coach keeps in touch with her runners with weekly Zoom meetings. On average, 70 of her roughly 80 middle distance runners participate.

“They’re disappointed the season was canceled, but recognize there is a bigger issue at stake,” she said.

“I tell them, Go run your Bay League Final event. There’s no prelims. Everyone can run it.”

As of last week, she said, about 30 of her runners had posted times for distances they would have run at the league finals.

“For both Velvin and Fiorito, the challenges of the pandemic helped them discover strengths they might not have found otherwise” he said.

The three Costa coaches also see a silver lining in the pandemic for the broader running public.

“One of our seniors who gave up running to concentrate on choir and theater, is now running seven to eight miles a day because her choir and theater groups can’t meet. I run through my neighborhoods and see whole families running. It leaves me with a good feeling,” she said.

Seawright-Newton has had similar experiences, exploring beach city neighborhoods during her 40-mile a week runs. She’s seen so many people running, she said, she worries runners will lose the right to run if social distancing isn’t maintained.

“Sometimes as I’m dodging people I feel like I’m in a video game,” she said.

Seawright-Newton ran at Mira Costa, a few years behind Williams-Smith, and at UCLA. In 2007, when her daughter Piper attended Hermosa Middle School, she founded the 101 Mile Club. This year the club has approximately 30 middle schoolers. Kids who run 101 miles get a highly prized 101 Mile Club hoodie. Since school closed, her kids have been posting their 101 mile qualifying runs on Strava.

“It’s amazing how far and fast these kids run without even knowing it because they are so busy talking to friends and enjoying the scenery,” she said.

Seawright-Newton sees the club as a feeder program not only for Costa track and cross country, but for a lifetime of running.

Running has experienced surges in popularity before, beginning in 1972 when Frank Shorter, “the father of modern running,” became the first and still the only American to win an Olympic Marathon.

“There was a second boom in the ‘90s when you saw marathons with 30,000 people,” Jeff Atkinson said. “But since 2000, we’ve had what runners call ‘global slowing.’ The number of road races has slowed. And times have slowed. In the ‘80s a top 10 finish in the Redondo 10K was under 32 minutes. Now 38 minutes will get you in the top 10. When the Manhattan 10K was founded in 1978 it was common for recreational runners to train hard, not in hopes of winning, but just to improve their personal best times. That’s not common anymore.”

Atkinson attributes ‘global slowing’ to the growing number of other mass competition opportunities.

“Volleyball, swimming, video games, flash mobs, drone racing…. Track and Field is the most popular high school sport in the country. And there are 25,000 high schools. Thanks to better coaching, nutrition and the internet, high school times have gotten faster. But after high school most runners stop running,” he said.

Atkinson, Williams-Smith and Seawright-Newton all expressed hope the coronavirus running surge will continue after schools and businesses reopen. 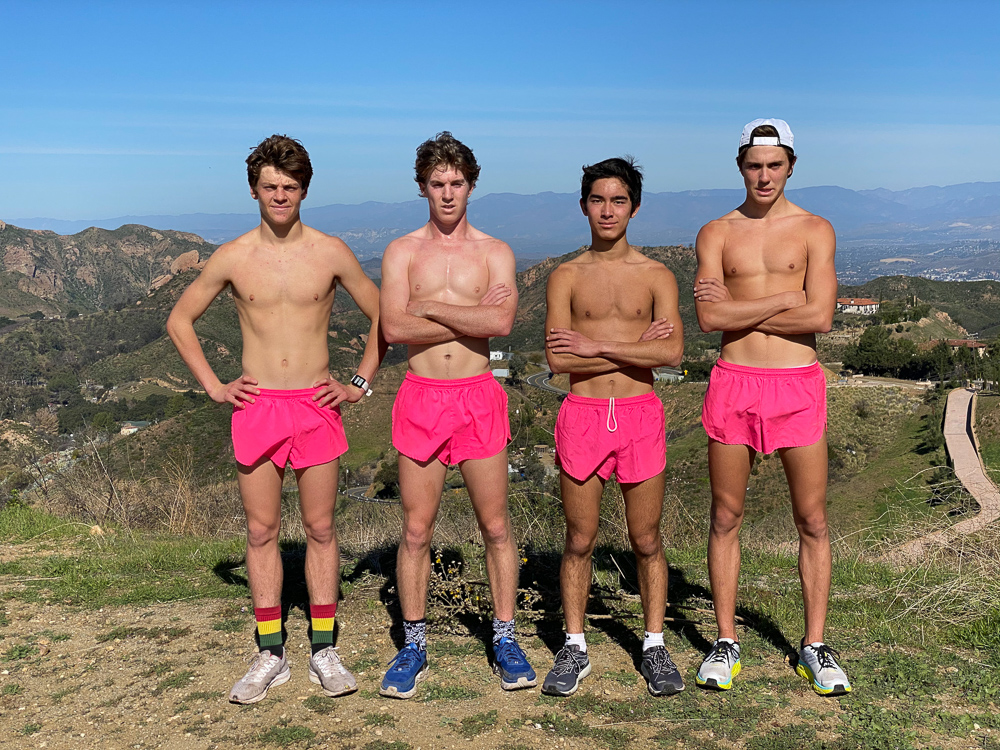 Cormack Carew Alex Fiorito Thomas Velvin and Billy Atkinson at the finish of of their Latigo Canyon Run prior to the pandemic.  The 10 mile run began at sea level and ended at 2,400 feet.  Timer photo by Jeff Atkinson

“It’s the best aerobic exercise there is and you feel good afterwards,” Atkinson said. He also mentioned societal benefits.

Atkinson compared his runners training during the pandemic, without the motivation of a championship and a stadium of cheering fans to Larry “Rain” Murphy (Peter Strauss) in the 1979 movie “Jericho Mile.”