The Manhattan Beach 10k bring community back together 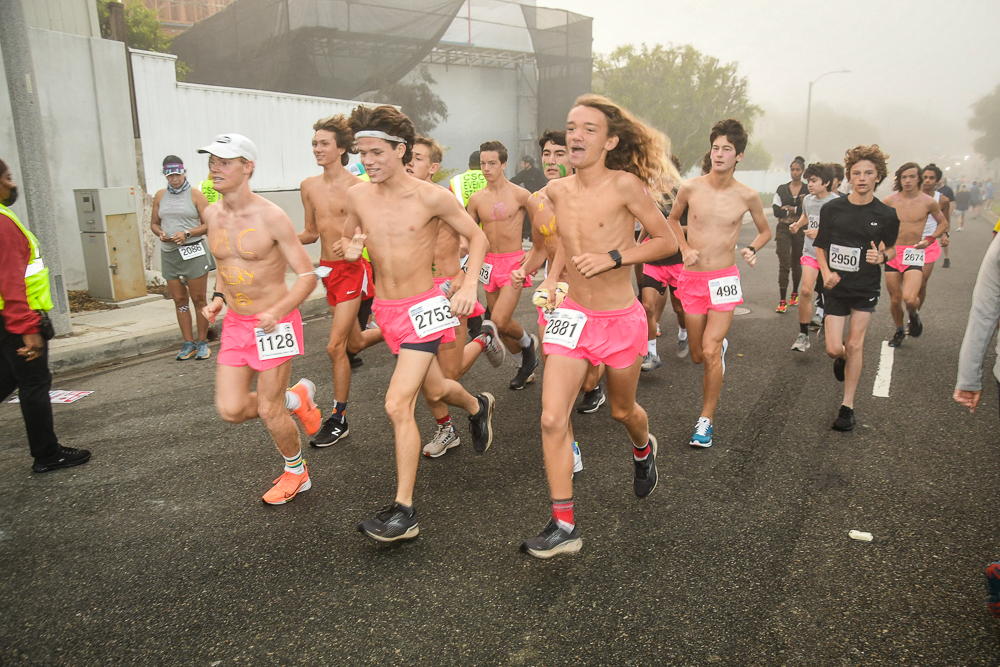 Mira Costa High runners. use the Manhattan Beach 10K each year for training. Photo by EnduranceSportsPhoto.com

After a year in virtual existence, the Manhattan Beach 10k came roaring back to actual life Saturday morning as 3,396 runners filled local streets in the 44th annual running of the race. 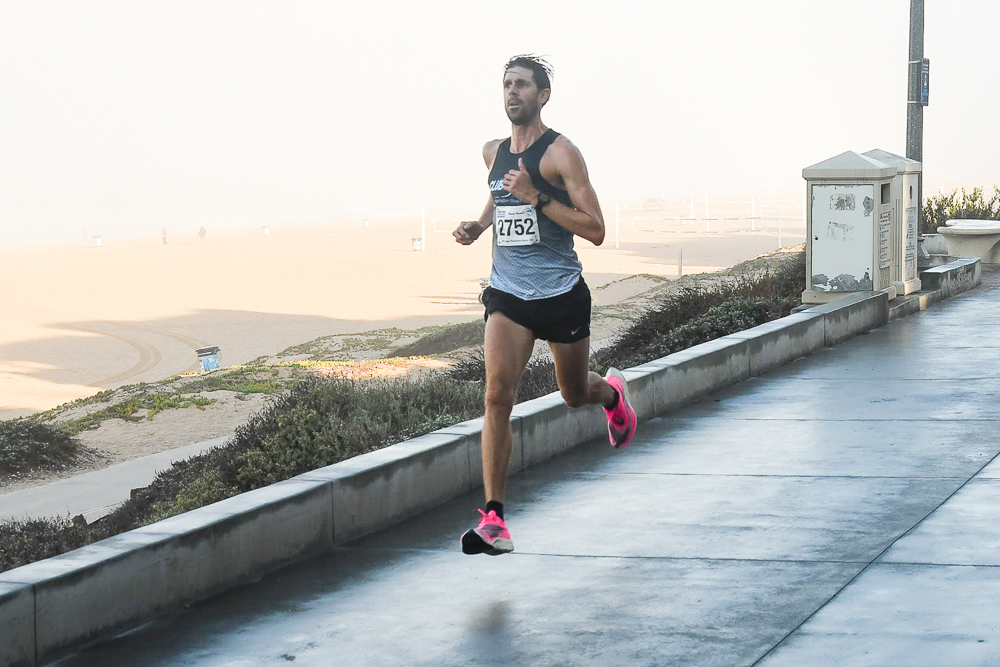 As always, the MB 10k was about more than top finishers, perhaps this year more than ever. After a year in which large gatherings were not possible, several numbers aside from the victors’ times told a larger story. A little more than 36 percent of participants were racing the MB 10k for the first time, while 46 percent had run the race at least three times and 31 had participated each year since its inception in 1978. Eleven local running clubs were represented, including 77 runners from the South Bay Running Club, 76 from MCXC, 63 from Club Ed, 34 from the Wall-nuts, and four from the Mira Costa baseball club. Overall, 68 percent of the runners were from the South Bay, while 1334 were from Manhattan Beach. Their ages ranged from 4 to 96. 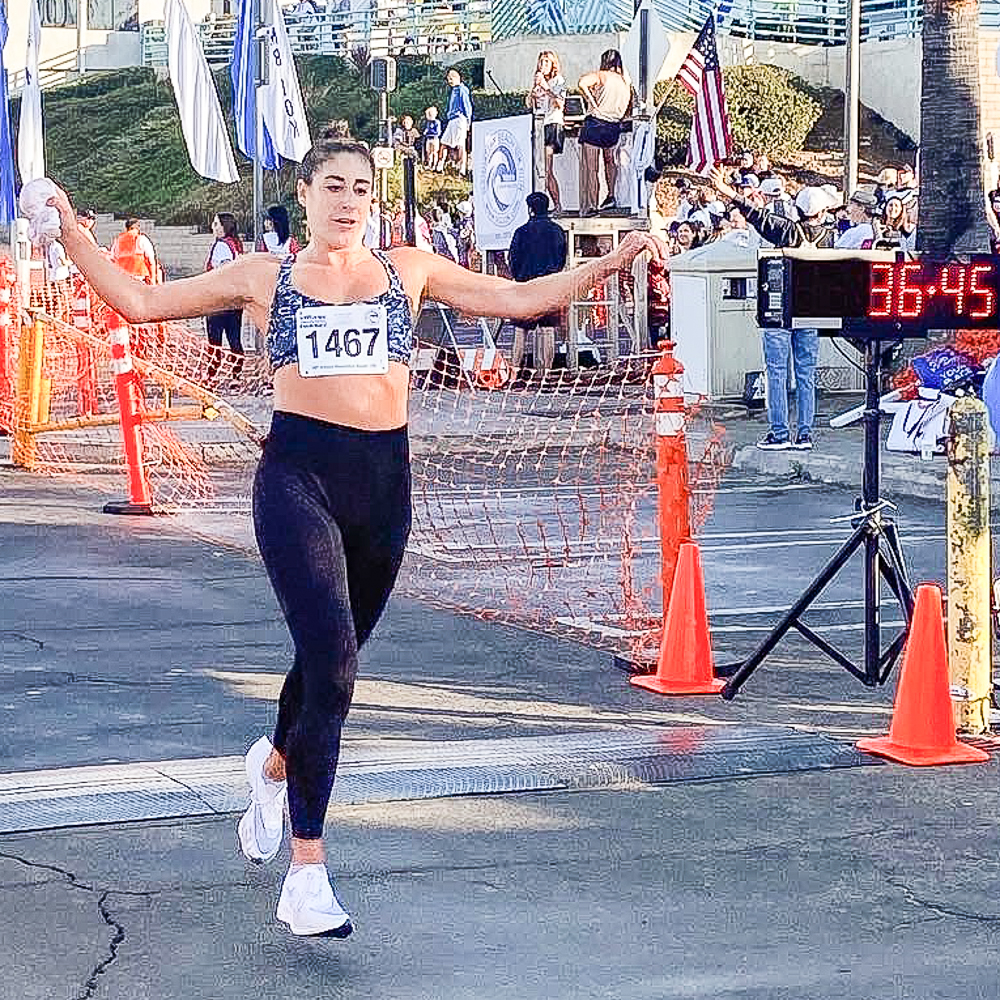 Shadeh Tabatabai crosses the finish line near the pier to win the women’s title at the MB 10k. Photo by Ashley Colin

Yet, according to race director Rachel Judson, this year’s race had one overarching, common denominator. Nearly every person participating did so with a large smile on his or her face.

“People were just really grateful to be back at a live event, just to be out there,” said Judson. “I mean, our race is always super special, but this year everyone was just so happy.”

Russ Lesser, former mayor and, along with his wife Charlotte, a proud member of the MB 10k’s P.I.E.R club (Participated In Every Race), said the pandemic year made the simple act of standing at the starting line Saturday morning smile-inducing.

“We were bunched up at the start, just happy, really happy, to be there,” Lesser said. “You had the Mira Costa choir singing the national anthem. It was just a special treat. The weather was perfect and everything was back to normal. It was a lot of fun.”

The start of the race was a special moment for competitive runners as well. Harwell was taking in the scene as the runners gathered and saw a woman he hadn’t seen since college in Santa Barbara 15 years ago.

“You see people at the starting line. She was just in town and came out to race,” Harwell said. “It’s little things like that you don’t get unless you have events like this, where people are coming together with similar interests.”

Tabatabai, who graduated from Mira Costa in 2009 and ran track at UCLA, had not competed in a race since before the pandemic.

“We’ve kind of just been doing time trials, because I run with a group of guys, and we’ve been trying to keep it fun during the pandemic,” Tabatabai said. “But just like 10 of us, max, so to have a huge crew out there —  yeah, super fun, and it totally added to the excitement level.”

Tabatatai has been running the MB 10k since she was a kid, and has never come close to winning it, so she didn’t go into this year’s race with any expectations other than to have fun. The guys she’d been running with were a part of Club Ed —  a running club founded decades ago by Ed Avol, a professor of medicine at USC, devoted runner, and a South Bay legend just for his kindness and ability to bring people together. One of those runners, Mike Cortez, convinced Tabatatai to run the MB 10k course differently then she had in the past.

“I’ve always run it in a way where I run the first mile super fast, because of all the excitement and everybody goes out super fast,” she said. “And then I die at the Rosecrans hill, because it sucks. So this year, he was like, ‘We are going to go slow the first three miles, and then we are going to pick it up. Because I want you feeling good when you finish’”

“That moment when I got to the Rosecrans hill, I was like, ‘Damn, I’m not dying right now,’” she said. “Usually, I literally feel so horrible that I walk up that hill, no matter what. This time I just flew up it, and I was like, ´Wow, this is definitely a better way to race.’ And realizing the finish line was only a mile away. ‘Okay, I can do this.’”

That last mile is along The Strand, with the pier at the end, growing bigger and bigger as crowds of people cheer. When Tabataitai crossed the finish line, it occurred to her that she might have won —  she hadn’t seen another woman pass her, but she couldn’t be sure.

“I hope I won,” she remembered wondering. “I think I won.”

Within a few moments, she was crowned the winner. Days later, Tabataitai was still in a bit of disbelief. “It was super cool,” she said. “Totally unexpected.”

Harwell didn’t necessarily expect to win, but he knew he’d be in contention. He lost the race in 2019 in a duel with a 20-year-old local runner, Matthew Arruda. They were neck and neck all along the last mile on The Strand until the younger runner surged a few hundred yards from the finish to win. It was one of the MB 10k’s most spectacular finishes ever and heralded as a “storybook ending” in news accounts due to how a hometown kid won in dramatic fashion.

“Storybook ending? It’s funny,” Harwell recalled. “Does storybook mean my reign as champion comes to an end? Did that light a fire? A little bit. It is fun to contest to win.”

Harwell is 37. He is originally from the East Bay, near San Francisco, ran in college at Santa Barbara, and has lived locally for the last seven years. He typically runs marathons and half marathons and has twice qualified for the Olympic trials, which are the focus of his training cycles. The MB 10k is important to him, but does not fall in a peak spot in his training cycle. A half marathon in San Diego and a marathon in Houston are his peak targets.

“I want to be one of the oldest fastest guys in the Olympic trials for 2024,” he said.

That said, Harwell always runs to win, and he definitely had some unfinished business at the MB 10k.

“There’s personal pride to it,” he said. “And at the MB 10k, you never know who is going to show up. It could be a young college kid who is really fit and really goes out and competes hard.”

Harwell’s plan was not to have a race that came down to who could finish strongest. He wanted to play to his strengths.

“I’m a good endurance runner, in terms of keeping a strong pace from the beginning,” he said.

He started well, but really hit is stride mid-race. By the time he came down Rosecrans hill, he was cruising, not all that concerned with setting record splits. He told himself he just wanted to enjoy that final stretch along the beach, taking in the people cheering and the beautiful Saturday morning. He wasn’t surprised that he won the race, but was surprised at how fast his time was.

“The time was good, my best on the course for the effort I put out,” Harwell said. “I was pretty pleased. I was very happy with the day.”

Judson, the race director for the last 18 years, rarely has time to keep up with the competition element of the race. The MB 10k, which Lesser helped co-found 44 years ago so emphatically as a community race that sponsorships have never been allowed (“That’s why it’s not the Amazon MB 10k,” she said), has a lot of moving parts. There are bands at different mile markers and dozens of community volunteers deployed for every aspect of the race —  including, this year, Boy Scout and Girl Scout troops, who helped give this edition of the 10k its special smile. This year also saw a runner collapse on the course, and other runners stopped to provide aid until medical professionals arrived at the scene.

“People jumped in, and that story is just incredible,” Judson said. “Of how when a guy went down, how fellow runners came together immediately to help a runner in need immediately. That about makes me cry…There was somebody in need and people just rolled up their sleeves and did what they needed to do…Just taking care of each other. It really underscores how great our community is. And I say that about our community, but it’s also just a great reminder about how fantastic people can be.”

This was Judson’s last MB 10k as race director. She’s turning the reins over to Micheal Weisberg, a longtime MB10k committee member and president of the South Bay runners club. Judson will continue as marketing director.

Weisberg said that Judson provided steady and innovative leadership during a time when a lot of the world around the race changed.

“She kept the tradition and rich history of the race and brought it into the digital age,” he said. “When a whole new crop of events and experiences came about for the Facebook and Instagram generation, she kept the MB10K relevant.”

Judson said it has been a good run, so to speak.

“People united in love of community, love of fitness, and love of tradition are alive and well at the Manhattan Beach 10k,” she said. “It truly has been an honor all these years to be race director…I’m thrilled that Michael Weisberg is going to take on the race director duties. For 18 years it’s been the best unpaid job I’ve ever had, but I also know for the race to continue on for the long haul, new leadership with a fresh perspective helps best assure it.”

“One of my favorite things to say to people when I sign off is, ‘Have a great time at the race.’ It’s been a great time, and I’m sure it will continue to be a great time.”