Part aviation museum, part flight deck for LAX, the iconic local restaurant offers a dining experience unlike any other the LA area 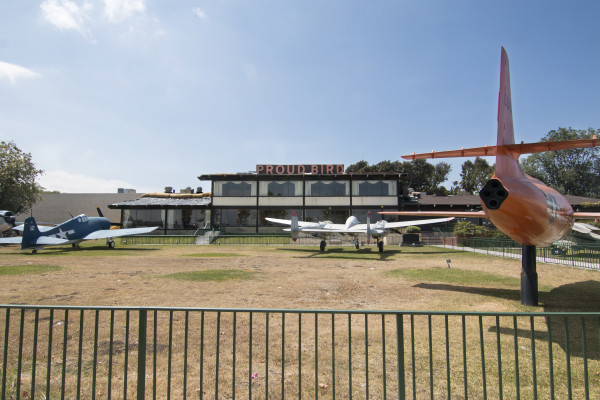 Exterior of the Proud Bird. Photo by Brad Jacobson

If you’ve driven past the LA Airport on Aviation you’ve seen the Proud Bird’s eye-catching collection of real and replica aircraft. The project was the dream on an aviation-obsessed restaurateur named David Tallichet, who opened the place in 1967. He not only filled the building with aviation memorabilia and photographs, but installed large windows so diners could watch the traffic into LAX. The restaurant and collection have been a local landmark for many years, and the Soviet-era MIG at the corner of their lot is in countless tourist photographs with the restaurant’s name in red block letters in the background.

Despite almost fifty years in business, many people don’t know that eating there is an option. I told friends that I was going to the Proud Bird for dinner, and every one of them replied with variations on, “Oh, is that place still open?” The restaurant’s problems with renewing their lease attracted press attention over a long period, while coverage of the successful end to negotiations was more scantily covered. (We did, on April 15.) As a result, any people don’t consider it as a dining option, and most haven’t noticed that the lights are still on and the kitchen is cooking. The location among edge-of-the-airport businesses isn’t in a nightlife district, and the side street driveway means that a high-profile building has a low-profile entrance.

This is unfortunate because the restaurant is definitely on the upswing. Staff morale has improved since the twenty-year lease was announced, and while the food isn’t cutting edge, it is noticeably better than before. We stopped in on a late afternoon so we could admire the collection of aircraft and oddities before dinner. The better light isn’t the only reason to dine early here – the restaurant closes unusually early, with last kitchen orders at 8 p.m.

We started with an ahi tower – a cylinder of tuna, mango, radish, avocado, tobiko caviar, and ginger with a wasabi crème fraiche. Stripes of sauce decorating the top added a bit of sophistication to an item that is all about fresh ingredients. The vertical presentation creates layers of fish, vegetables, and mango, and it’s as tasty as it is pretty. The modern trend is to deconstruct salads like this so you can mix and match ingredients, but we were quite happy with this melded version. 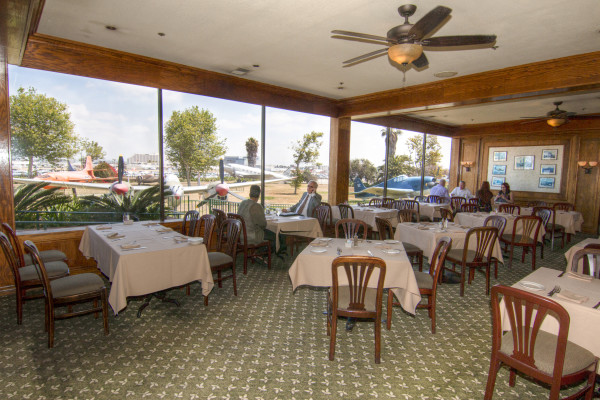 Interior of the Proud Bird. Photo by Brad Jacobson

I ordered beer-cheese soup as the starter with my entrée just because it had been so long since I had seen it on a local menu. The idea goes back to medieval Germany, and when done right the beer gives a bright, slightly sour flavor that accents the rich, funky cheese. They do it right here, and add bacon bits for a hint of smoky flavor. The white bean soup was very good too, though somewhat more peppery than expected, and the Caesar hit the mark. I would have preferred more anchovy tang, but my companions liked it just as it was. The only flaw in this course was the dinner rolls, which were dense white bread, served cold. Heating them would have helped, and a breadbasket with some variety would have been even better. The pesto butter served with them would have been good on crusty sourdough or wheat rolls, but after a bite of the bland, soft bread I decided to wait for my main course.

That may have been a wise move, because the portions here are immense. My companions ordered a ribeye steak and the parmesan-crusted chicken, while I had a daily special of boneless short ribs braised in wine and mushroom gravy. My ribs were as falling-apart tender as a good pot roast and were delicious, and I’d suggest adding this to the regular menu. It came with a mound of mashed potatoes and well-assorted mixed vegetables.

The ribeye was a big bone-in hunk of meat that was ordered medium-rare but arrived rare – unusual since most restaurants err on the side of overcooking. It was beautiful but somewhat tough, whether because the brief cooking or some other factor. The béarnaise served with it was excellent, and I’d consider ordering another steak here just to have something to put this sauce on.

Though the chicken was referred to as parmesan-crusted, implying a crisp breadcrumb, herb, and grated cheese coating, what arrived was much closer to a classic chicken parmesan. The two flattened breasts were crusted, but a fresh tasting tomato sauce and mozzarella were baked over them. This resulted in a tasty dish, but heavier than expected. Measured by the standards of the Italian classic, it was quite good, but they should change the menu description.

At the beginning of our meal we had cocktails, switching to wines when food arrived. The bar program here isn’t ambitious, but the drinks are well-crafted. The Gold Rush – bourbon with honey and lemon juice – is one of those simple delights that is always enjoyable, but the very good balance and generous pour on the mai tai was outstanding. These are often a sweet, fruity mess, but everything was in harmony so you could taste the good rums and liqueur along with the citrus juices.

Dinner had been so filling that dessert didn’t tempt us, and we walked off some of our meal exploring the vast collection of aviation memorabilia that decorates the walls and halls. The display here would do credit to a museum, and is one of the added attractions to dining here. If you have even a particle of interest in the human conquest of the air you will find it delightful to dine in this setting while watching planes land next door. The exotic location carries a premium – our meal for three ran $181 – but it’s unlike any other dining experience in greater Los Angeles.