The Quarantine Sketchbook: How Hellboy artist Mike Mignola and his wife Christine raised $500,000 to help people in the pandemic 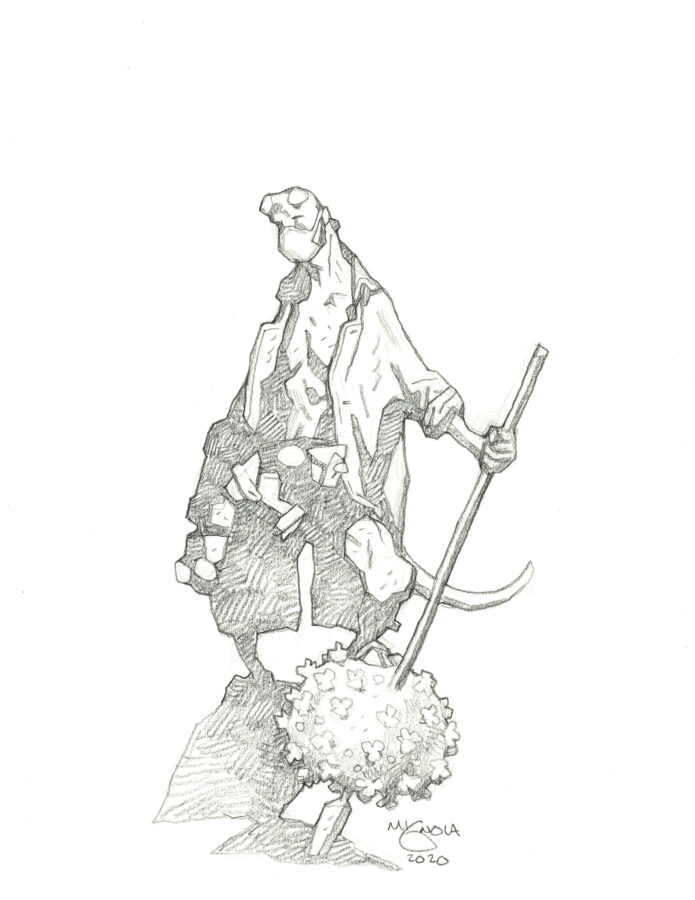 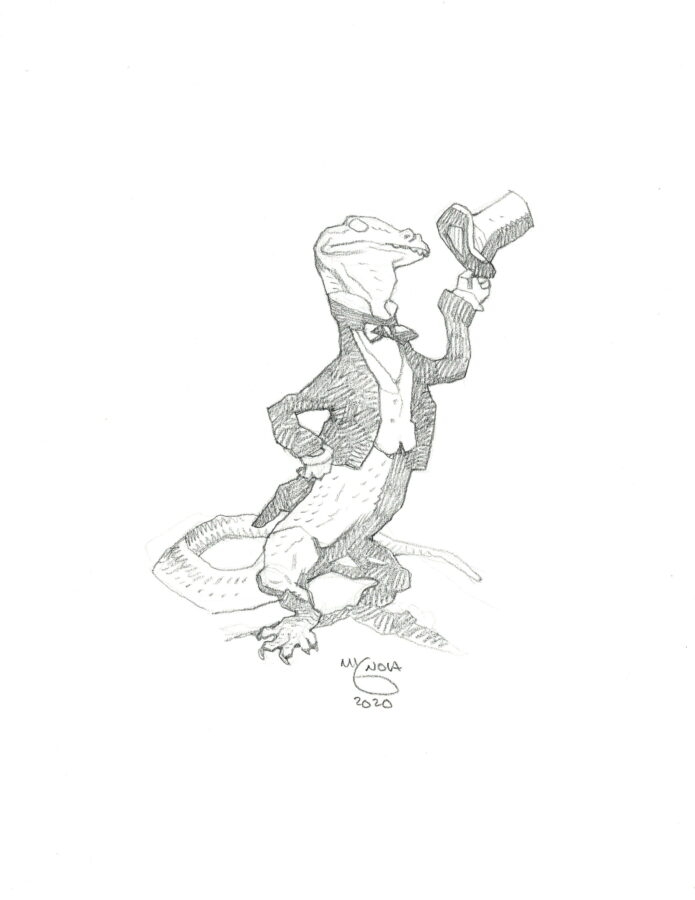 “Lizard is just a lizard,” Mike Mignola said of this sketch.

Christine Mignola remembers how, in the early days of the pandemic, the depth of the crisis began to sink in for both her and her husband, Mike Mignola. It went from a dawning realization in February 2020 that the novel coronavirus’s arrival was inevitable to a shockingly vast pandemic quarantine by the third week of March 2020.

“Wow! What do you do?” Christine recalled thinking. “First I made sure we had enough toilet paper and food, and then I started to mass-produce masks for people who needed them, since PPE [Personal Protective Equipment] was scarce. My husband? He went to the drawing board.”

These thoughts form part of the introduction Mignola wrote for the work that resulted at her husband’s drawing board, “The Quarantine Sketchbook.” Mike Mignola is one of the most revered comics artists of the last half century, most famously as the creator of the “Hellboy” series.

As the Manhattan Beach couple battened down the hatches after the state’s stay-at-home orders were issued, they were determined to make the most of the time.

“You see, Mike is semi-retired and had nothing on his schedule,” Christine wrote, “and by the look of things, nowhere to go.”

The Mignolas were fans of Chef José Andrés’ World Central Kitchen, a non-profit that provides meals for those in need, particularly in places suffering from man-made or natural disasters. The WCK launched its #ChefsForAmerica campaign when the pandemic hit, mobilizing local restaurants to bring over 25 million meals to families, schools, seniors, and healthcare workers in 300 cities.

The Mignolas began by auctioning off original pencil sketches online, on eBay. Mike used the opportunity to draw pretty much whatever crossed his mind —  Hellboy, of course, but Mignola also ranged freely across pop culture, drawing everything from Punch and Judy to Batman to the General Mills Cereal Monsters (including Count Chocula and Franken Berry). They published the drawings on social media, as well, where they drew a huge following. As the sketches accumulated, eventually they were assembled in an oversized hardcover collection from Dark Horse Books, with the proceeds going to the World Central Kitchen. In total, the Mignolas were able to contribute over $500,000 to help provide meals to people all over the country.

This accomplishment was recognized in December by the Manhattan Beach City Council as part of Mayor Hildy Stern’s Kindness Initiative, which hopes to increase acts of kindness locally by putting a spotlight on such acts. 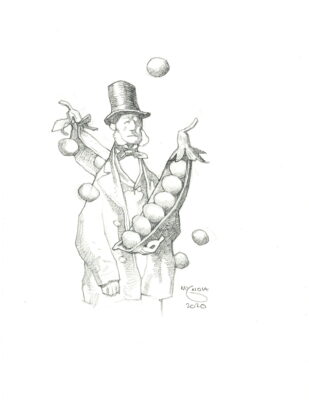 “Man with Peas” by Mike Mignola

“This is just a beautiful way for him to use his talents as an author and as an artist to raise money in a very, very kindhearted way,” Stern said at the meeting.

Mignola credited his wife for having the idea to use his work for a larger cause.

“I did the drawings just because it was the pandemic and I didn’t know what to do with myself,” he said. “And turning that pile of drawings into an auction and all of that —  that was Christine. I was the guy just doing drawings and making myself laugh and she turned it into something.”

“We felt very helpless during the pandemic,” Christine said. “We just wanted to help people. I’ve always followed José Andrés, and his organization, so we felt that that was the best place to put the money and we had a lot of fun with it. We ended up doing it for about nine months. Every five days we would put four pieces up on eBay, and we ended up raising a half a million dollars. So it was pretty exciting and very rewarding that we were able to do that.”

Mike Wellman, the founder and former co-owner of local Comic Bug store (and current owner of the Atomic Basement Comics in Long Beach), said Mignola’s sketches were received as an unexpected treasure within the comic book world.

“Mike is a unique and singular voice in not just the comic book industry, but in the world of fine art as well,” said Wellman, a well regarded comic book artist in his own right. “Nobody draws like him.  And, unlike some of us, he used his time and creative energies wisely to draw these amazing sketches that actually drew from many corners of our geek culture…It’s a pleasure to see his interpretations of iconic cartoon characters I grew up with. I think he even drew Tony the Tiger.” 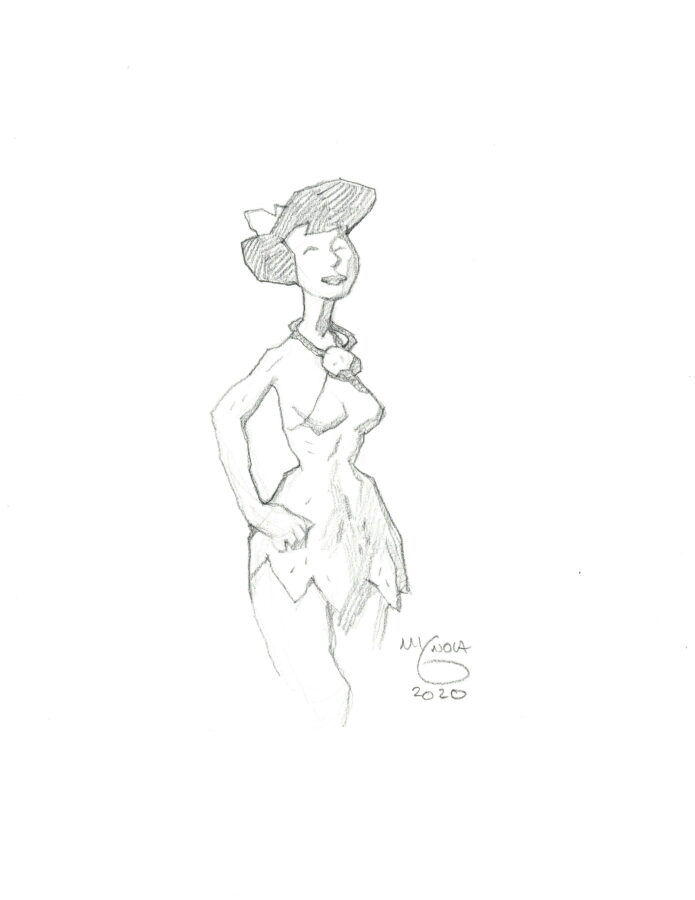 “His distinctive slope-shouldered, deep-eyed figures read as unearthly and macabre versions of familiar characters like Thundercats and He-Man, Kermit the Frog, and Hanna-Barbera cartoons: the Fred Flintstone family is appropriately Neanderthal, right down to the…mini-mammoth vacuum cleaner,” the review said. 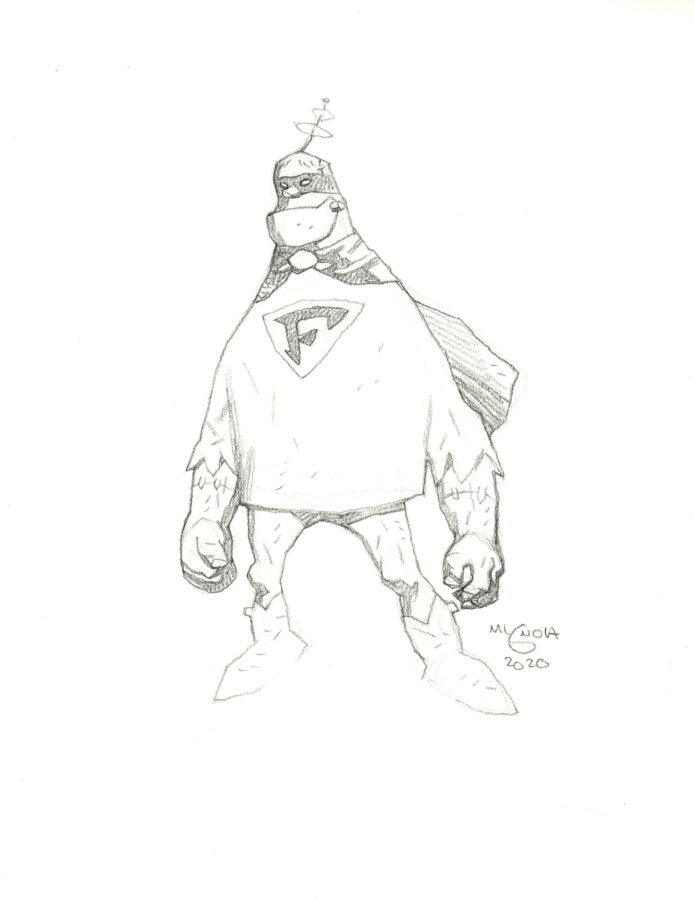 Wellman noted that the Mignolas have a long history helping out others in time of need. They donated a print to a Comic Bug fundraiser to help after New Orleans was flooded after Hurricane Katrina.

“And you know the old saying. ‘Behind every great man is a great woman,’ which almost describes Christine, except she’s not behind him, but beside him if not in front of him,” Wellman said. “She’s a force of nature who lets Mike focus more on just creating. They’re a lovely family.”

Mignola downplayed his role in the effort, crediting his wife for allowing the work to do something useful in the world. 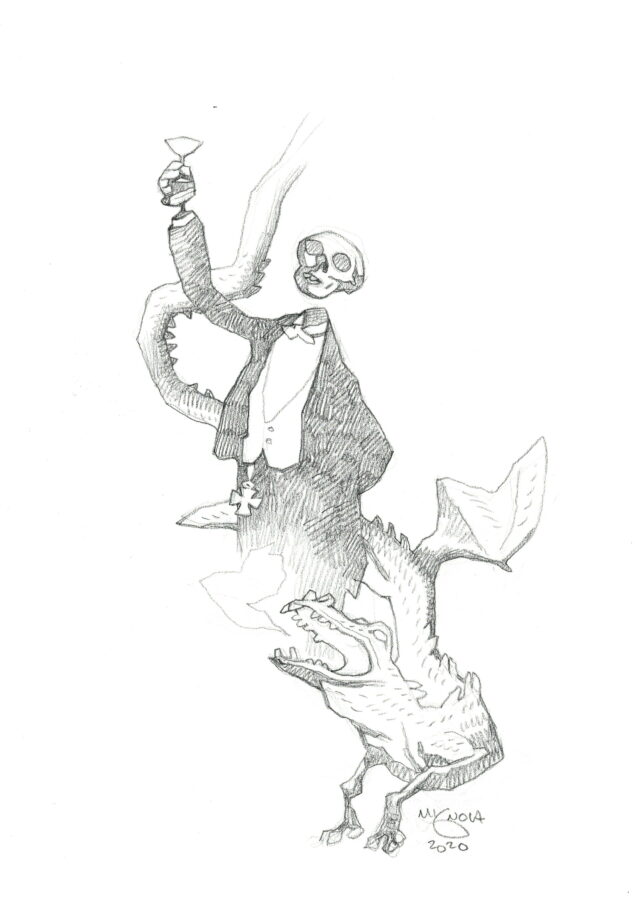 “I mean, it really was something I was just doing for fun,” he said. “I actually felt a little bit guilty that the world is collapsing around us and I was drawing Snap, Crackle and Pop, Quisp & Quake, and Mr. Peanut…. People were following it, and people were entertained by it, and it was nice [Christine] figured out something to do with it.”

“I will say that what you thought was just a lot of fun was really an incredibly meaningful act towards those who benefit from World Central Kitchen,” said Stern. “You raised over $500,000. That is more than just a little bit of fun. It’s a little bit of hope.” ER