There’s no getting out of this one 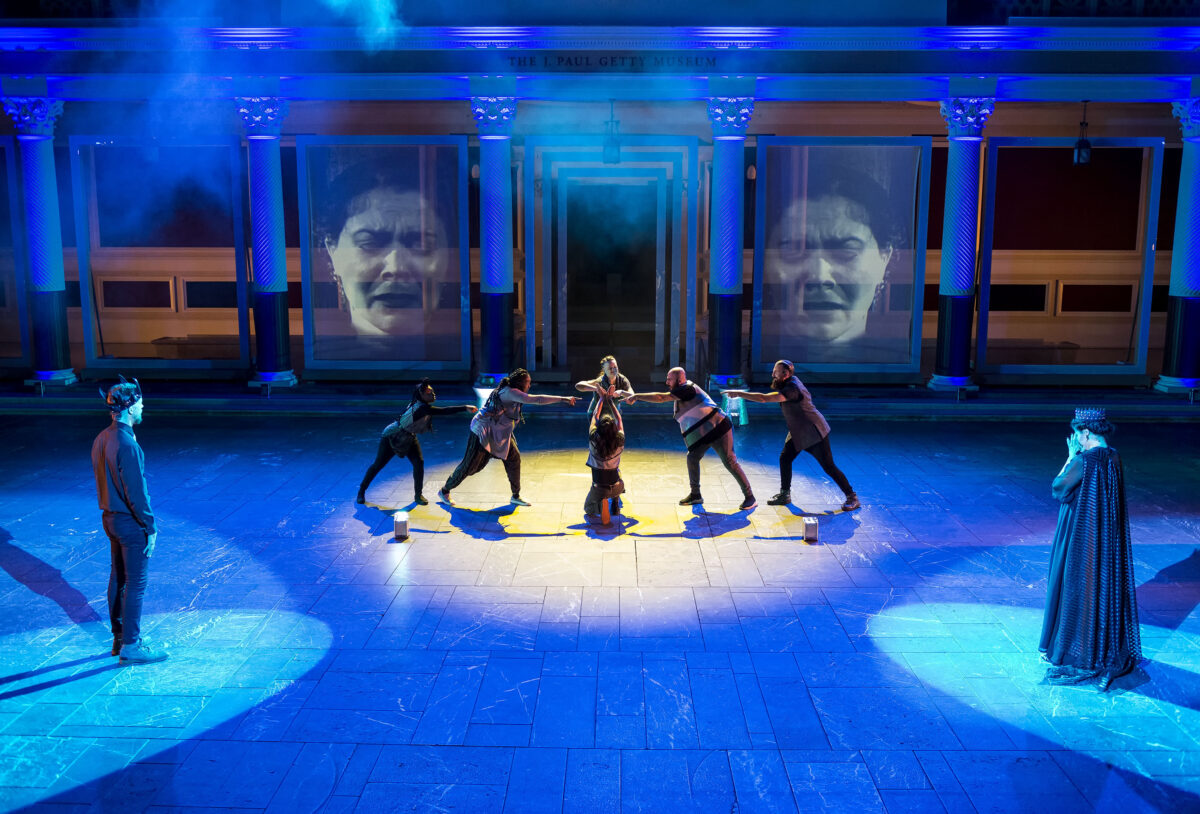 The cast of “Oedipus”. Photo by Craig Schwartz

Trouble in the kingdom

“Oedipus” at the Getty Villa

It’s a story as old as the hills, but as presented by Deaf West Theatre and directed by Jenny Koons, who also adapted this ancient treasure, “Oedipus” springs to life in a way we assuredly have not seen before. That’s because the narrative — played out in the outdoor amphitheater at the Getty Villa in Malibu — is conveyed through the shifting vehicles of spoken dialogue, supertitles, pantomime, and American Sign Language. The company, and if you’ve seen their productions of “Big River” and “Spring Awakening” you already know this, has the market cornered on this kind of thing.

Sophocles, who probably wrote on tablets very different than the ones we use today, was quite prolific, the Stephen King (or is it Stephen Rex?) of his era. But of his estimated 120 plays, a mere seven survive.

Essentially, “Oedipus” is a chronicle of a death foretold, a murder mystery with everyone knowing the outcome beforehand, at least where the audience is concerned and, increasingly, where the characters in the play are concerned as well.

Laius, King of Thebes, is informed by the Oracle of Delphi that any child he sires will grow up and kill him. Solution? Don’t have kids. However, at a toga party or some such equivalent, his Queen, Jocasta, becomes pregnant. Plan B? Hand over the newborn to a palace servant who’ll give it to a shepherd who’ll leave the babe in the woods to be devoured by wolves. 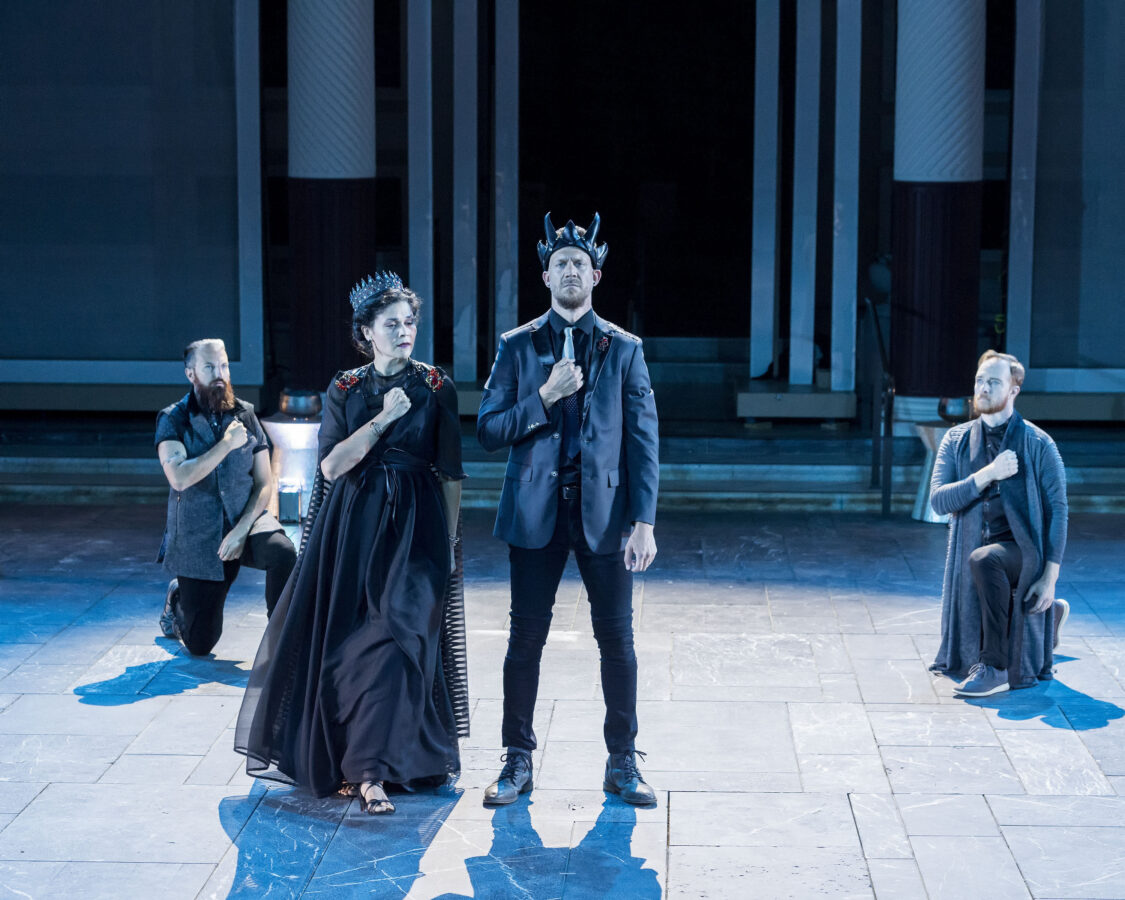 Left to right, Andrew Morrill as the Chorus Leader, Alexandria Wailes as Jocasta, Russell Harvard as Oedipus, and Matthew Jaeger as the Oedipus Advisor. Photo by Craig Schwartz

The same shepherd, or maybe it’s another (there are lots of variations here), takes pity on the infant and bundles it away to Corinth, where the childless King and Queen raise it as their own without ever having to show adoption papers.

The kid grows up, consults the oracle himself and gets the same message — the child of the king will kill his own father — and so he skedaddles from Corinth in order to elude the greasy hands of Fate. Or so he thinks.

While out on the highway there’s a road rage incident and he slays a couple of people, one of whom just happens to be his biological father, King Laius. Whoa, how’s that for a coincidence! He then encounters the Sphinx who demands that he answer a riddle, the one whose answer is “Man.” The Sphinx hurls herself from a cliff and at the same time a plague is lifted from Thebes. Apparently that’s enough for the townsfolk to declare that Oedipus should be their new ruler, and to wed and bed the wife of the old king (by now a widow for two decades).

Perhaps there was a stipulation, something buried in the fine print, that one couldn’t ditch the old queen and pick one closer in age to oneself instead of one old enough to, ahem, be your own mother. But no matter, Oedipus and Jocasta proceed to have four children, two boys and two girls, the most famous of which is Antigone, who’ll later be her father’s/brother’s guide after he blinds himself. What? Blinds himself? Have I missed something? No, you haven’t, and you already know how this play ends anyway, don’t you? 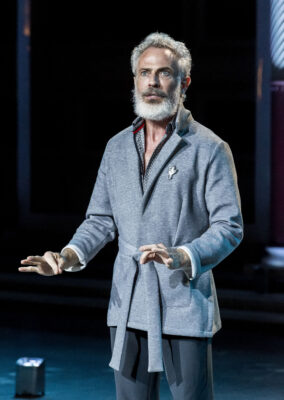 Fast forward a few years and there’s a new plague (not COVID, not yet). Creon, Jocasta’s brother and the brother-in-law/uncle of Oedipus, knocks on the door at Delphi, only to be told that the murderer of King Laius must be found and punished. Well, hey, Oedipus is all for that, although no one comes out and comments on the Oracle’s strange request. By now, it’s a cold case, and DNA sampling is still a millennium or two away.

But while ancient Greeks didn’t have DNA kits they did have seers and prophets, and the best in the business was Tiresias. And so he, or she in this case, is summoned and naturally is tightlipped about telling Oedipus that, by the way, the killer you seek is you yourself. Remember that road rage incident from 20 years ago?

And so, one by one, the worms start crawling out of the woodwork, the palace servant tells her story, the Corinthian corroborates it, and two plus two is starting to add up to four.

Although Oedipus seems at first to be a fair and benevolent ruler, there’s a change — and not for the better — in his demeanor. One would think that the man who aced the biggest riddle of all time could unravel the more modest one of who killed the former king, but he appears to be the last person to see the light. However, I’d attribute this more to his blocking out anything leading in that direction. In the meantime, he’s increasingly rude to Creon and later we can see the subtle panic in Jocasta as she begins to grasp the horrific truth.

In short, Fate gets in the last word, has the last laugh, but also to be underlined is that Oedipus doesn’t shirk his responsibility for his deed, unintentional as it may have been. The play’s coda is like a prolonged epileptic fit, but it does drive home the tragedy of what we’ve just seen. 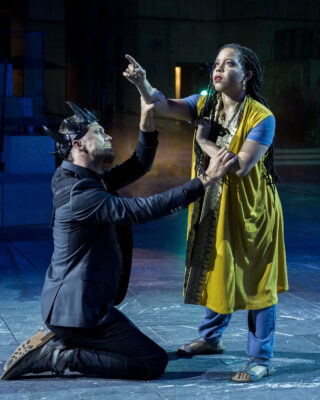 Russell Harvard as Oedipus and Ashlea Hayes as Tiresias. Photo by Craig Schwartz

And what have we just seen? Well, for one, an ensemble piece in the fullest sense because the technical crew is on par with the acting. There’s Russell Harvard as Oedipus, Alexandria Wailes as Jocasta, Ashlea Hayes as Tiresias, Amelia Hensely as the palace servant, and Jon Wolfe Nelson as Creon. Visually, Nelson is perhaps the most convincing character in the play (you’d be tempted to bow to him if you passed him on the street), with Wailes herself pretty impressive, especially when the poop starts hitting the fan.

Throughout, the production is moody and atmospheric, the result of a collaborative effort by set designer Tanya Orellana, lighting designer Jared A. Sayeg, video projections by Yee Eun Nam, and an electronic soundscape by Peter Bayne that would be at home in a movie by Guillermo del Toro. The actors are outfitted (by Jojo Siu) in shades of gray, medieval-colored clothes, but none of it’s specific to any set time frame. And actually, because of that, there are moments when the cast — in how they are positioned and choreographed — look like they’ve just been beamed down from the Enterprise in a “Star Trek” episode. There’s a haunting, eerie at times, blue-gray pallor that envelopes the staging area as if we’re just steps away from this becoming a deep space thriller.

During the first few minutes I wasn’t so sure I was going to like this rendition, but I found it increasingly riveting, although a bit less so by the end. The choreography, accommodating the different methods of communication, is seamless throughout, and while one does need to engage the narrative on several wavelengths this is not an exhaustive task. The grief is palpable on many levels (thus not recommended for pre-teens), as for example when Harvard’s Oedipus, using sign language for the most part, occasionally utters a loud sound or a few words. Quite effective, actually.

Okay, maybe not quite a gem, because what makes this production unique also puts a bit of distance between the action and the viewer, but a well done, first rate show by any standard.

Oedipus is being staged through Oct. 1 at the Getty Villa, 17985 Pacific Coast Hwy, Pacific Palisades. Co-produced by Deaf West Theatre, with ASL adaptation by Andrew Morrill and Alexandria Wailes. Performances, Thursday, Friday, and Saturday at 8 p.m. Tickets, $40 Thursday ($36 students and seniors on this night only); $42 Friday; and $48 Saturday. Parking, $10 after 6 p.m. Meals available for purchase. Running time, 90 minutes, no intermission. (310) 440-7300 or visit getty.edu. ER