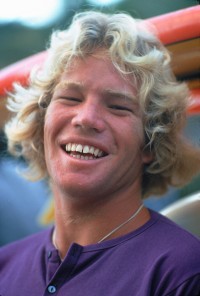 James “Tiger” Makin seemed a little shy out of the water. But in the water he was always pushing the envelope. The bigger it got the more Tiger liked it. He’d take off deeper than anyone else behind the bowl, then race through the tube.

In the early ‘60s Tiger, a 5-foot-9, 150 pound, freckle face grommet, was a consistent finalist on the United States Surfing Association competition circuit. He was a member of the Bay Cities Surf Club and was sponsored by Rick Surfboards. Dru Harrison was Tiger’s best friend and had his own Rick surfboard model called the Improviser.

Tiger rode the Phil Becker designed UFO and along with Ronny Garner made it Rick’s best selling surfboard. When surfboards went from over 9-foot to under 7-foot in 1968 a lot of the top surfers couldn’t adapt. But the short board revolution just made Tiger more aggressive in the water. Dru and I had more than we could handle surfing 16th Street Hermosa or big Redondo Breakwater when Tiger was in the lineup. In ’69 Frank Petrillo had the most popular surf shop in Newport Beach.

The reason was Dru, Tiger, Chris Schlickenmeyer, Eddie Underwood, Mark and Chris Macmillan all surfed on the Petrillo team. They lived in Hermosa Beach so Frank opened a second shop on 6th and Pacific Coast Highway, across from Rick, and asked me to join the team. Dru, Tiger and I were in all the Petrillo Surfer Magazine ads and several of the Sea Suit Wetsuit and Kanvas by Katin surf trunk ads well into the mid ‘70s. Tiger also did ads for Body Glove, Control Surf Wax and Golden Breed Clothing when he returned to Rick Surfboards in the mid ‘70s.

Tiger lived on 6th Street in Hermosa Beach, next to Clark Stadium and surfed in front of Dru Harrison’s house at 15th Street and The Strand. He loved the long rights at Malibu and one day asked me to go with him because a big south swell was about to hit. I told him that I loved Malibu’s waves but hated the Malibu’s crowds. He told me not to worry because he surfed late at night. I said, “ It’s dark. How can you see where you’re going?” He gave me one of his famous Tiger smiles and said he had a secret. A couple of days later I saw Tiger at a party. He told me Malibu was four feet with perfect shape and he would pick me up at midnight, after the party. Tiger picked me up and we headed north on PCH, chugging Winchell’s Coffee to sober up and eating carrots so we could see in the dark. Tiger must have had 50 carrots in his shopping bag. We were pretty wired from the coffee and I couldn’t see a thing. I kept stubbing my toes on the rocks and got run over twice on the paddle out. It was 1 a.m. and 40 other surfers were already out. I hated it. I couldn’t see the sections ahead or other surfers paddling out. Tiger, who was still buzzed from the party, thought it was great. I woke up the next morning with orange skin.

The following week was the Malibu Surf Contest. I was up against Tiger in the finals, which began after sunset. It was man on man, like today’s pro contests, so Tiger and I were the only two out, enjoying the four foot waves off third point. The lifeguards lined up their vehicles and turned their headlights on so the judges could see us. I was winning when the last set of the heat pushed through. I was trying to keep my inside position so Tiger couldn’t get another wave, and caught what I thought was the last wave of the set. It sectioned in front of me because I was too far back. With just two seconds to go Tiger caught the next wave and pulled into a tube that spit him out rounding second point. The crowd went crazy and Tiger won. In the next Surfer Magazine the contest story was called “Tiger and his Carrots.”

What friends are for

Tiger became a consistent finalist, placing fifth in The United States Surfing Championships at Huntington Beach and making the top 10 in the new Western Surfing Association, which guaranteed him a spot on the California team in the 1972 World Surfing Championships in San Diego. Tiger and I were roommates for the 10-day event at Shelter Islands Holliday Inn. All the top surfers in the world were staying at the same hotel, turning the place into a huge “Animal House” party. For the Brazilian and Peruvian surfers it went around the clock, like Carnival. I woke up with Kim, a beautiful, perky blond Florida surf groupie, to the sound of my parents and my girlfriend Karen knocking on the door. They had driven down to catch my heat in the World Surfing Championships. I shook Tiger and told him to jump in my bed. He was reluctant until he saw Kim. I thanked him later for getting me out of an awkward situation.

He just said “No. Thank you,” and smiled that smile as he walked up the beach hand in hand with Kim. The following winter Tiger and I were on Oahu’s North Shore trying to prove to the surfing world that we were more than small wave surfers. Tiger charged big Sunset Beach, showing no fear, and had several outstanding days at Pipeline. He even suckered me into surfing 15-foot, outside Log Cabins so Leroy Grannis could take pictures of us. It was very scary riding gnarly waves in the middle of the ocean before surf leashes. I was living with Angie, a buxom 17-year-old surf groupie from Malibu whose parents gave her a $500 a week to have a good time in Hawaii. She had a raven-haired, Nia Peoples (from the movie “North Shore”) look alike girlfriend named Sara. They rented a beautiful house in front of Leftovers, next to Waimea Bay. Tiger was over all the time trying to be my new best friend to get next to Sara, who had her pick of any surf star on Oahu.

In the ‘70s there were no girls on the North Shore during the pro contest season. After a few weeks even the palm trees looked good. A few of the pro surfers brought their girlfriends along, but for the rest of us it was a scavenger hunt. 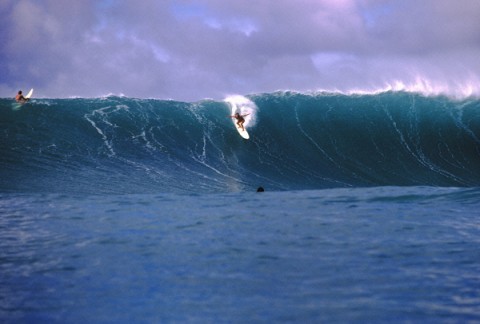 In ‘72 Tiger and I were invited to surf in our first Duke Kahanamoku Surfing Classic on the North Shore of Hawaii. It was a huge honor just to be invited to what was considered the Super Bowl of surfing. Making the finals was the highlight of our surfing careers. Tiger and I both ripped, but were overshadowed by Hawaii’s Booby Jones and Jeff Hakman, Australia’s Peter Townend and a few others who caught all the set waves. I finished 6th and Tiger got 7th. That night Tiger talked me into double dating to the awards banquet at the Turtle Bay Hilton so he could take Sara. Tiger got pretty buzzed and argued with me all night. He wanted us to cash our prize checks so we could rent a big suite and order room service to impress the girls. I finally passed out back at home. The next morning I found Tiger sleeping alone in the backseat of my $100 French Vauxhall. Neither of knew how we got home, or where the girls were. Tiger was invited to surf in three more Duke Kahanamoku Surfing Classic’s.

When Tiger returned to the South Bay he lived with John Joseph at 15th Street and Manhattan Avenue. They lifeguarded together at Redondo’s Seaside Lagoon and gave surf lessons in Manhattan Beach. John considers Tiger one of his closest friends and is elated by the fact that Tiger’s plaque will be next to his on the Surfers Walk of Fame. Tiger rode a Rick Surfboard through the ‘70s and is still friends with Phil Becker, another walk of fame inductee, and with Becker’s former partners at Becker Surf — Steve Mangiagli, Dave Hollander and John Leininger. “Tiger Makin is the best surfing name to come out of the South Bay. He wasn’t just great surfing the local beach breaks but he was outstanding in Hawaii’s big waves,” said Lenninger. Kip Jerger surfed with Tiger at Lunada Bay in the ‘70s. “Tiger and Dru Harrison would ride big Lunada when nobody else would go out. Everybody would sit on the cliff and watch them just tear it up. I surfed with Tiger all the time on the North Shore because he was so much fun to be with in the water. He was always smiling no matter how big or gnarly it got. I’m elated that he finally made the Surfers Walk of Fame,” Jerger said. 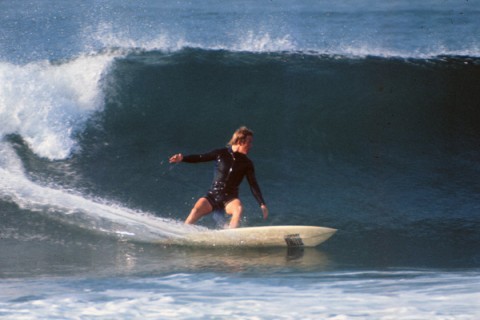 Tiger Makin backside at the Redondo Breakwater, circa 1969. Photo by Steve Wilkings (www.stevewilkings.com)

Pat Ryan is the South Bay’s most well respected progressive shaper. He has been making boards for ET Surfboards since Eddie Talbot opened his Hermosa Beach shop in the early ‘70s. for the past 25 years, Ryn has lived in Tiger’s old house, next to Clark Stadium. “Tiger is the perfect guy because he is from Hermosa but surfed so well in Hawaii’s big waves that surfers around the world knew him,” Ryan said. He has invited Tiger to stop by his home to check out his old room. Scott Kerwin nominated Tiger Makin for the Surfers Walk of Fame. “We played baseball together at Clark Stadium. Then we started surfing together at 10th Street in Hermosa Beach.

We were only about eight years old and couldn’t make it outside, so we just rode the whitewater everyday after school. Years later we surfed the North Shore together,” Scott recalled “Tiger ate it really bad one day at Gas Chambers. He got stuck underneath a corral ledge that didn’t let him surface until after he blacked out. That night he had a nightmare about the wipeout and woke barfing up saltwater.”

Kerwin agreed with Ryan that Tiger is a deserving choice for this year’s inductee. In 2003, Tiger was invited to compete in the Quicksilver Masters World Surfing Championships. It was held in 15-foot point surf at Makaha and he was scared to death. He finished 5th, beating out Clyde Aiku, Jock Southerland and Ben Aipa. Today Tiger is 58 years old and lives with his wife and kids in Hawaii, where he works as the YMCA Aquatic’s Director and surfs with his old Rick’s shaper Phil Becker. B