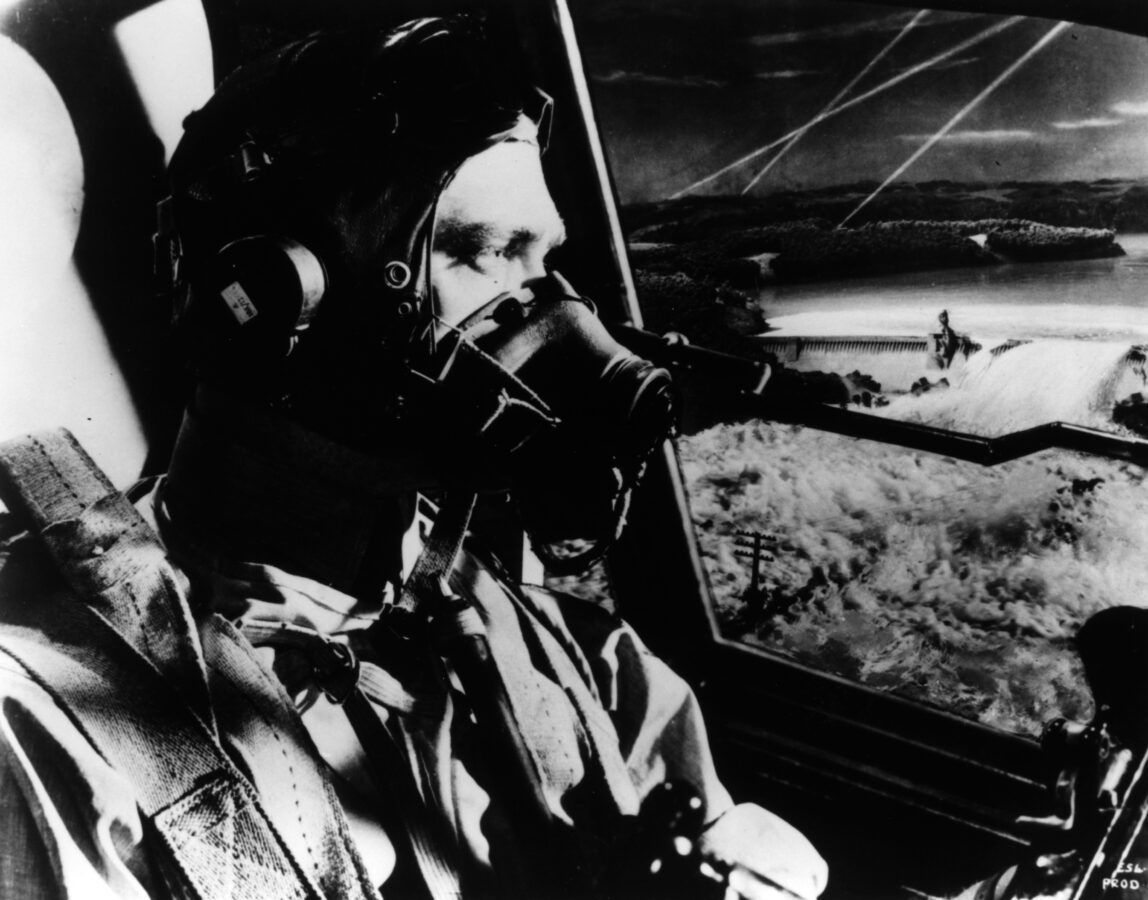 Part of Film Movement Classics Blu-Ray DVD launch, “The Dam Busters,” directed by Michael Anderson, known for a number of big features in the 50s and 60s (“Shoes of the Fisherman” “The Quiller Memorandum”), is a film that deserves a reissue. Originally released in 1955, the screenplay written by R. C. Sherriff, based on the memoirs of Wing Commander Gibson and the book by Paul Brickhill, is compelling and engaging. It’s significant to note that Brickhill also wrote the book on which the movie “The Great Escape” was based. He truly knows how to tell a good story and build tension, both of which are in evidence in this film.

Dr. B. N. Wallis, a scientist and inventor who, after dropping out of school, took apprenticeships that eventually led him to a degree in engineering. This eccentric man was not to the manor born, as they say. His beginnings were decidedly working class but his genius was soon recognized as an aircraft designer. With the advent of World War II he recognized the need for more targeted bombing against the German enemy. He realized that one of the best ways to cripple the Nazis was to target their steel manufacturing, an industry dependent on an uninterrupted source of water. The three major plants were located near dams that would become his targets.

British bombing had been ineffective because they were unable to penetrate the dam wall. The damage was always minimal. Wallis came up with a novel solution – a bomb that when dropped from the belly of an aircraft would bounce, like a skipping rock, until it reached its target and blow a hole in the side of the dam.

A squadron of top RAF pilots was recruited, to be led by Wing Commander Guy Gibson. Sworn to secrecy and without revealing the target, Gibson trains his men for an unusual bombing mission, one that will be conducted at a dangerously low altitude.

With a top notch script, Anderson keeps the story moving and generating enough mystery and tension to keep you engaged. It is a great example of a story told chronologically that remains interesting throughout. Chronological storytelling is often the most difficult because it has a tendency to be expositional. While the trials and travails of Wallis are sometimes expositional, they are counter-positioned by the emotional story of the airmen.

The leads are excellent. Led by Sir Michael Redgrave (father of Vanessa and Lynn) as Willis, he is totally charming and wears his eccentricity with warmth and vulnerability, much as he did as Earnest in the filmed version of “The Importance of Being Earnest.” He continued to be a much sought-after actor into the 70s in film, television, and theater where he was considered as one of the greatest stage actors of the twentieth century alongside Gielgud and Olivier.

As Wing Commander Gibson, Richard Todd shines through. A leading actor in the 50s and 60s, he was a charming and sympathetic presence in all of his films whether as a villain in Hitchcock’s “Stage Fright” or as a hero in “A Man Called Peter.”

There is an advisory at the beginning of this reissue about offensive language that they chose to leave in.  I couldn’t imagine anything I hadn’t encountered before but they were right. The name of Gibson’s beloved black dog is a real gut-wrencher and it is repeated over and over again. The name of Gibson’s dog is unpleasantly jarring every time it is uttered and is an ever-present reminder of the insular elitist nature of the microcosm of British society that the military was and probably continues to be. There are no people of color in this film. The only “diversity” present in the command are the Australians and New Zealanders and they were considered “less than.” This is the white “one of us” society that still exists today.

Nevertheless, this is a film worth revisiting or, as in the cases of many of us, seeing for the first time.

The history of Dunkirk is one of the most heroic stories taking place at the very beginning of World War II. As the Germans started tightening the lasso around southern Belgium and northern France, 300,000 British soldiers became trapped along the beaches of Dunkirk when France capitulated to the Germans. Caught flatfooted, the Brits had to devise a way to rescue their soldiers, representing a substantial portion of their army, and bring them back to Britain. The Germans, knowing of this predicament, constantly strafed the beaches and attacked the British Navy ships attempting the rescue. Directly fortifying that effort were the many fisherman and recreational boat owners along the English coast who sailed the Channel and plucked the stranded soldiers into their vessels and made their way back. This is one of the most exciting, thrilling, and terrifying episodes in the history of the British war effort and was fundamental to stirring the British people to support the war effort, one that was met with a tepid response prior to this event. For a truly excellent view of this unbelievable story, see the Oscar winning 2017 film, “Dunkirk,” directed by Christopher Nolan.

“Dunkirk” directed by Leslie Norman in 1958 is a poor substitution. Norman, basing part of his story on the memoirs of Lieutenant Colonel Ewan Butler and Major J. S. Bradford, spends very little screen time on the story of the rescue. Instead, the screenplay written by David Divine and W.P. Lipscomb tells the parallel stories of residents of a small seaside village that didn’t really believe in the war effort and a small troop of soldiers in France separated from their battalion. In the village, one of the leading citizens, Charles Foreman, is most concerned about the lack of information coming from the government and the ignorance and laissez faire behavior of his neighbors, especially John Holden.

Meanwhile in France, Corporal Tubby Binns is left leading his small group to find their “lost” battalion. Tubby is a very reluctant leader but is forced by rank to pull them together. After many near skirmishes with the German army, he successfully gets them to the beach at Dunkirk where they join hundreds of thousands of others. 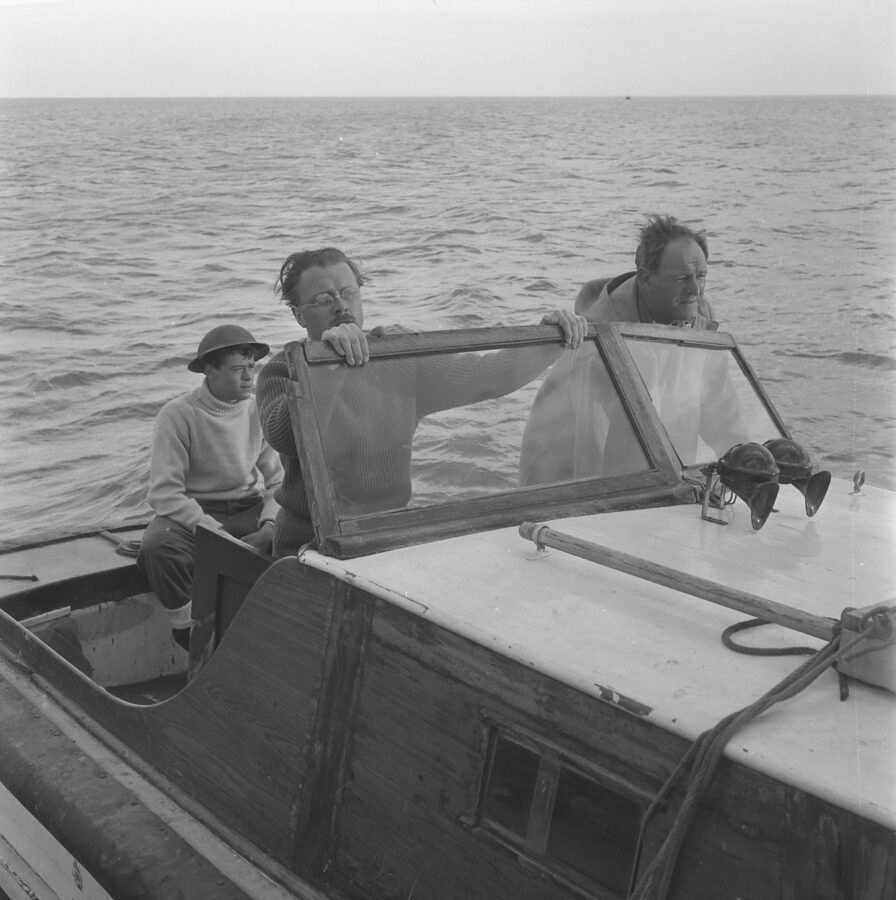 Back in the village, all the boats owned by the villagers are requisitioned by the Navy to make a top secret trip to France. Although the Navy does not want civilians involved in this action (and this seems to be in direct contradiction to what actually happened), Foreman demands to be part of the operation, pulling in with him the reluctant John Holden and Holden’s mechanic Frankie.

The official version of this film is that the Navy and their destroyers were the primary rescuers. With the exception of our intrepid village heroes, very few small boats are seen. Tubby and his remaining men are rescued by Holden and make it back to England. The End.

The two storylines never jell. They do not intersect organically and feel very forced. The real story is the heroic effort of the small boat owners but we only see two. The dangers felt by Tubby and his motley and often disobedient crew do not produce the thrills they should have. And in the end, one is left with a lot of men stranded on the beach, bombs falling everywhere, and no flag flying, hip hip hooraying resolution.

The cast is peppered with excellent actors to little effect. Tubby is played by John Mills (“Tunes of Glory” “Hobson’s Choice” “Great Expectations”). The very versatile Richard Attenborough (“The Great Escape” “Jurassic Park”) has the thankless role of the reluctant Mr. Holden. It is Bernard Lee (famous for M in the James Bond movies) who makes the most of Charles Foreman. He finds the depth in his character and ties everything together as best he can, given the limitations mentioned above.

Unlike “Dam Busters,” there isn’t really a lot to recommend this film.

The Blu-Ray DVDs of both films launch on March 23 as part of a trio of restored British World War II films that includes “Ice Cold in Alex.” Also available on the streaming service filmmovementplus.com