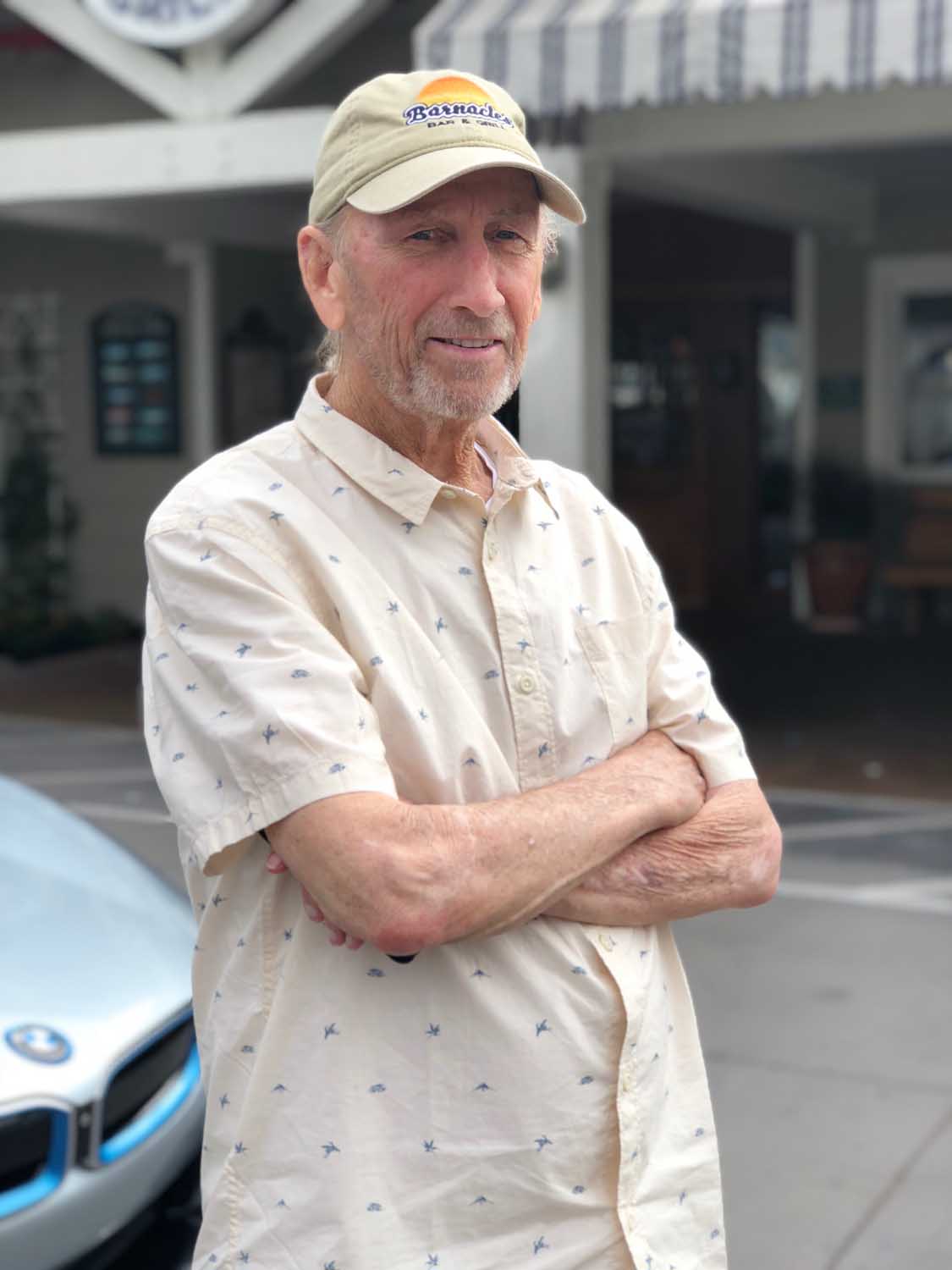 After returning to the South Bay from the desert in the mid 2000s, Ted Van Huisen bought a pair of Harley Davidson motorcycles: one for himself, and one for someone else to ride with him. The someone else would turn out to be Ted, Jr., one of his children, whom he taught to ride a motorcycle in the King Harbor parking lot. On Sunday afternoon, Ted Jr. rode that motorcycle to Barnacles Bar and Grill on Hermosa Avenue, another of Van Huisen’s mid-aughts purchases, for a celebration of his father’s life.

Van Huisen, a South Bay developer and restaurateur, died suddenly last Wednesday. He had gone to the hospital the previous week for some tests, family members said, and had been released to go home to rest. He was 75.

Van Huisen was not only Barnacles’ owner, he was a regular customer, and he often held court there with a long list of friends accumulated over a lifetime of generosity that could take even family by surprise. Outside of the bar business, he built a reputation as a sharp-eyed developer of properties in the South Bay and the Southern California desert.

Barnacles regular Bobby Dias described Van Huisen as a close friend, and gratefully recalled that he introduced him to The San Franciscan steakhouse in Torrance. Like many, he described  Van Huisen as a good listener and an even better dispenser of advice, which often took the form of encouraging people to find pleasure in life.

“He soaked up all his years of knowledge, and very simply spat them back out,” Dias said.

In the 1970s, Van Huisen partnered with restaurateur Pat McCauley to open La Paz in downtown Manhattan Beach, on the land where the Strand House is today. Patrons recall it as a legendary bar that drew all kinds of people, and showed the rest of Southern California how good a time could be had in the South Bay.

“He was really good at buying land. He knew what was going to be valuable 20 years before anyone else did,” McCauley said.

But Baron, another of Van Huisen son’s, said this skill might have more to do with time in a tavern than people realized.

“He’s a pool player. He always saw his next move two or three steps ahead of everyone else. And he did most of his deals in the bar or on the golf course,” Baron said.

McCauley and Van Huisen were partners in La Paz until the late ‘80s, at which point it was known as Sunsets, when Van Huisen agreed to be bought out while separating from his first wife. But the two stayed close. McCauley was in Van Huisen’s second wedding, and the two sometimes vacationed together to Puerto Vallarta.

Having a “South Bay legend” for a dad did not make for a conventional growing up. Ted Jr. said that his father was “not the cheering in the stands at the Little League game type,” but was “a fun dad.” Baron recalled that Van Huisen imposed few rules growing up, but was hard to please and occasionally unpredictable. One year, he might miss Christmas, then unexpectedly show up in the middle of summer, weighted down with gifts for everyone, Baron said.

Years of partying seemed to catch up with Van Huisen in the early ‘90s, as he began to suffer from health problems, with some fearing they were going to lose him. (One person gathered for Sunday’s celebration cracked that it was Van Huisen’s “second wake.”) But he got a liver transplant, and spent the next two decades sober.

Ted., Jr said that, in this period, Van Huisen he became “much more private and family-oriented.” He delighted in his grandchildren, and prioritized getting together with them for vacations.

“Family became the most important thing to him. I think he needed to almost lose it all to see that,” Ted, Jr. said.

Van Huisen set his sights on other business opportunities in the desert. He partnered with John Brett, a South Bay native and brother of baseball player George Brett, to develop properties in La Quinta and surrounding areas.

He returned to Hermosa and opened Barnacles in 2006. Friends and patrons said it became a place where Van Huisen could carry on the tradition of no-frills South Bay watering holes he had patronized in previous decades.

“It was always about locals having a good time. It wasn’t some flashy, Hollywood spot,” Ted, Jr. said. “He wanted the kind of place he liked to hang out in. He wanted to go somewhere where he could wear flip flops.”

Van Huisen’s son Baron managed the bar when it first opened. Baron said that his father was “not much of a presence” when Barnacles first opened. But after about five years, he started drinking again, and became a common presence in the bar, one of many patrons to have a favorite stool.

Lisa Cassity, who began working at Barnacles in 2008, said that, at first, she was concerned. She knew that Van Huisen had had a liver transplant, and worried about his health. But she came to see that Van Huisen made the decision well aware of the possible ramifications.

“He wanted to experience life, even if it meant health problems down the line,” Cassity said.

Like others, Cassity described Van Huisen as possessing a rare blend of kindness and business acumen, attributes that did not seem to fade when he had a cocktail in his hand. He quickly understood people, she said, and while his ability to “see through BS” may have turned some people off, for those that understood him, it made for deep friendships.

That included many of those who worked for him, like bartender Irene Davilla. Davilla has worked at Barnacles for about five years, and said that she often spent time with Van Huisen off the job, taking their dogs for a walk or going for a bike ride. Van Huisen’s infectious personality made the decades that separated them irrelevant. 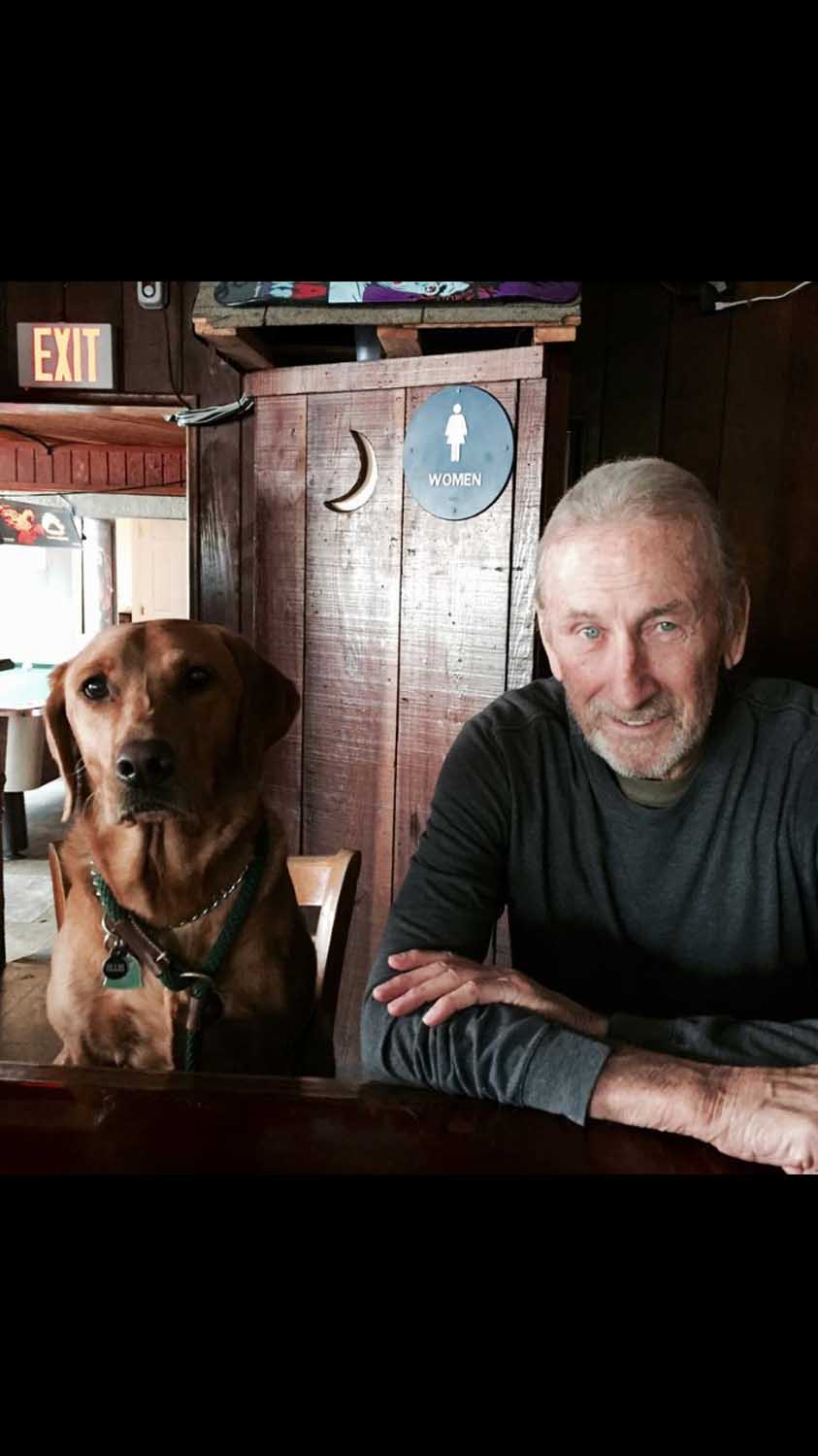 Van Huisen inside Barnacles with his dog Ellie. A friend will now take care of the dog.

“It was a joy to come in to work. He made everybody feel like family,” Davilla said.

Cassity said that, with Van Huisen gone, she feels an obligation to keep Barnacles just as Van Huisen envisioned it. Sunday’s memorial gathering, thick with people, provided a good first test. Hawaiian shirts, tank tops and motorcycle jackets mixed easily; flip-flops, old school Vans and work boots shuffled between the pool room and the outdoor patio. It was a scene that Van Huisen, with his irrepressible life-of-the-party vibe, would have appreciated.

“Sometimes we wouldn’t see him for a couple days, and we’d wonder, Why are we bored? Then we’d remember, Oh yeah: Ted’s out of town,” McCauley said.