Venice alive and well in Torrance 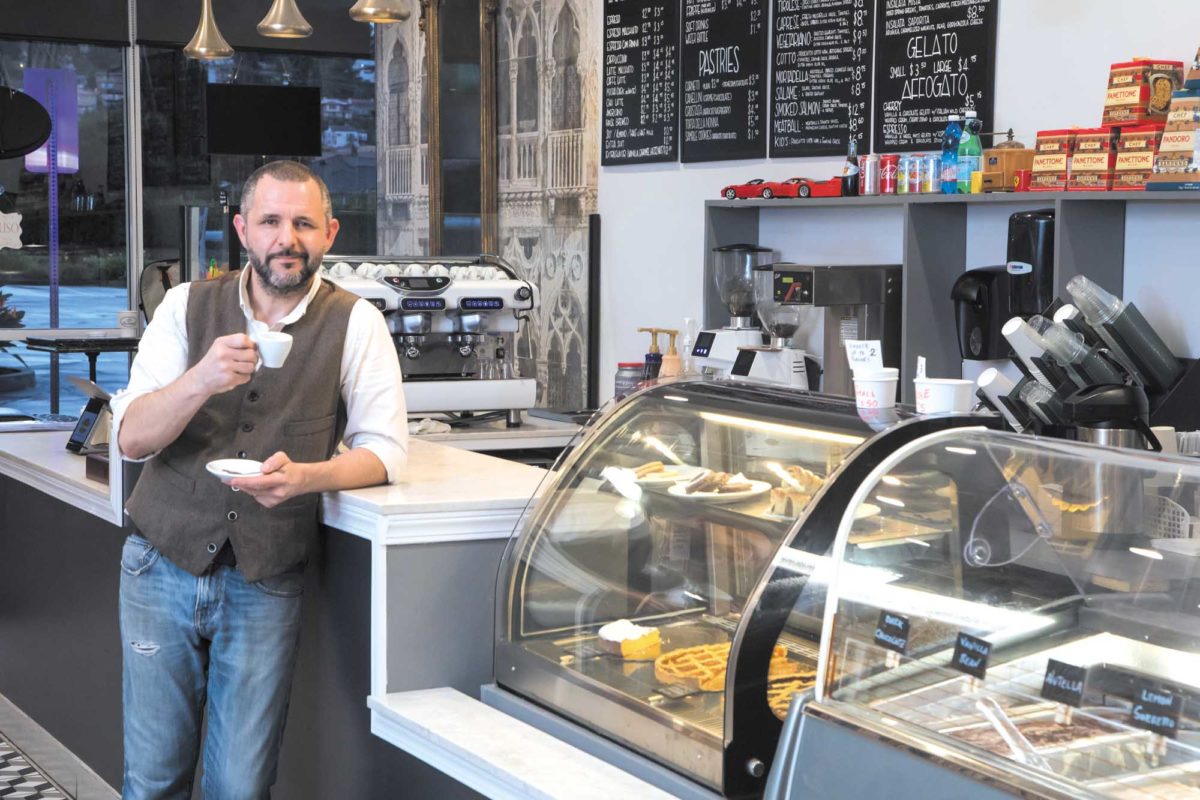 Il bar, where the Italian’s drink and drive

There’s a reason Starbucks gives their drinks Italian names. Their Frappuccino and their measurements venti and trenta are either meaningless or misleading in Italian, but they reflect the fact that Italians not only invented the espresso machine, but most of the drinks that are made with it. When you order a cappuccino or macchiato, you’re paying tribute to an obsession with coffee that goes back centuries.

There’s a Starbucks on the corner of Hawthorne and PCH for those who like their products, but go just half a mile east and you will find something more unusual – one of only two Italian-style coffeehouses in the South Bay. Café Tre Venezie opened almost two years ago in a low-profile location between some medical buildings and a Chinese buffet. Almost immediately it became a destination for the local Italian community. (I wasn’t sure we even had a local Italian community, but on my last two visits there were people conversing in Italian at the table next to me.)

Owner Alessandro Chiaretto set out to recreate the coffeehouses of his homeland in the Veneto region, right down to the Venetian glass chandeliers. One wall is covered with a picture of balconies over St. Mark’s Square, and the TV at the back of the room shows images of driving through the Italian countryside. You’ll get motion sickness if you pay attention to it for long, but you won’t because you’ll be distracted by the food and coffee.

The coffee menu is traditional, the lattes, macchiatos, et cetera using the Danesi brand imported from Rome. That’s the quintessential Italian dark roast, and though I prefer lighter roasts myself the coffee is bracingly strong but not bitter. A handy chart explains the balance of ingredients in popular coffee drinks, which is something other establishments should emulate. 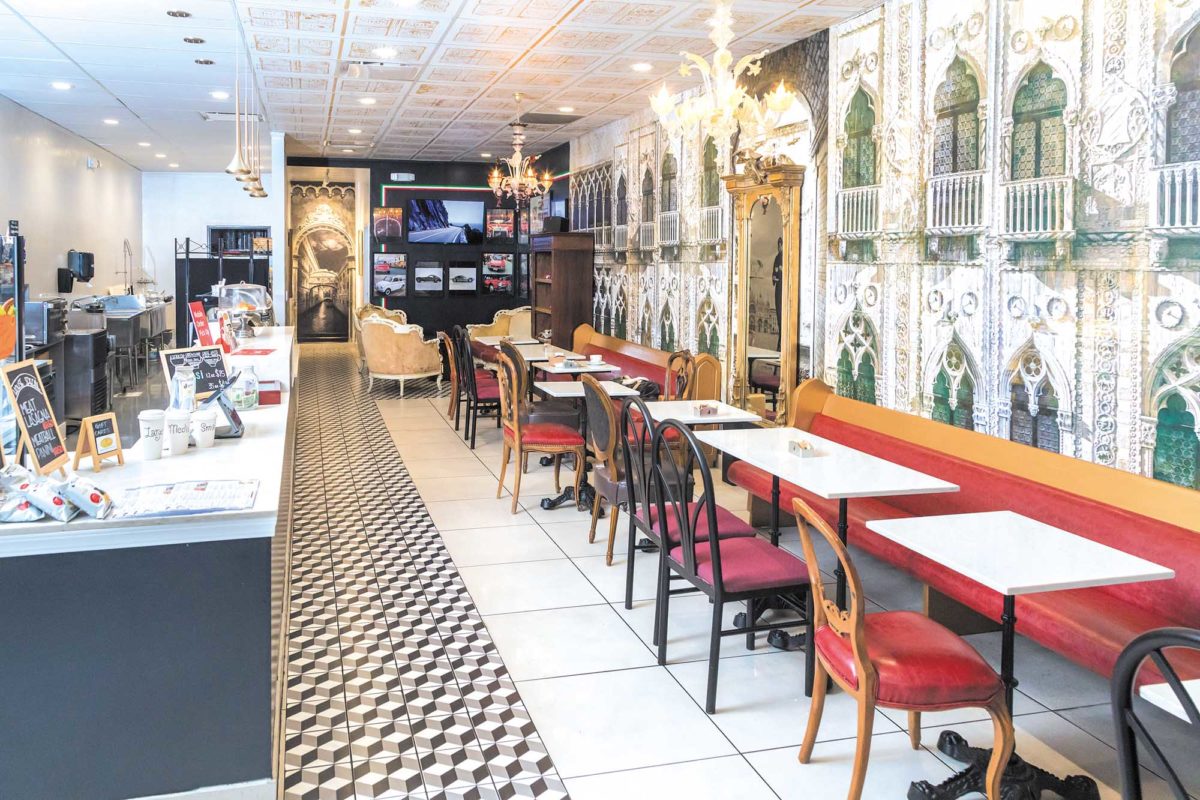 The TV plays a continuous loop of a drive through the Italian countryside.

There’s more to a coffeehouse than coffee, and Tre Venezie offers an array of panini, salads, and sweet items, usually with a daily pasta for those who want a full meal. Their panini will surprise Americans who think of panini as a pressed sandwich, because that’s not what they serve. In Italy, panini means any sandwich involving a toasted roll, not necessarily one that is flattened in a hot press. The sandwiches are baked in an oven, and the ingredients are Italian proportions, about half as much as a typical American deli. Americans stack a sandwich high with meat and cheese, sometimes of mediocre quality, while Italians value premium ingredients with more vegetables and condiments. If you’re looking for the kind of sandwich that requires you to unhinge your jaw like a python swallowing a crocodile then these are not for you. But if the goal is a satisfying meal that won’t leave you feeling stuffed this is a good choice.

I have tried two paninis, the “rustico” with 24-month aged prosciutto, smoked scamorza cheese, arugula, and white truffle olive oil, and a “Tirolese” with speck ham, fontina, and porcini mushroom spread. They’re both good sandwiches served on fresh and light Italian rolls, but I’d give the edge to the rustico. I like the Tirolese mushroom spread, which is rich with just a bit of fungi funkiness and pairs well with the mildly nutty cheese and prosciutto, but the arugula in the rustico adds a nice crunch and slight bitterness that throws the other flavors in higher relief. I might order the Tirolese again and ask them to put a bit of greens in the mix, but that’s a personal preference.

That arugula is front and center in their most interesting salad, the saporita (Italian for “savory,” though it can also mean salty. We presume the former was what was intended). The slightly bitter greens are moderated with caramelized walnuts and pear slices, plus a judicious amount of pleasantly pungent gorgonzola cheese. It comes with fresh ciabatta bread on the side, and is a light meal for one or a starter for two.

That salad is a perfect counterpoint to their lasagna, which isn’t on the regular menu but seems to be offered often. This isn’t the meaty, stacked high style with thick noodles that is popular in Sicily and New York, but isn’t quite what you’d get in Venice, either. There they use very thin noodles that are almost like crepes, and there is no cheese. Bechamel sauce based on flour and clarified butter with milk or cream and spices, always including nutmeg, is more popular there. The version here is Northern style in that it features thin noodles and less meat, but the sauce is tomato-based and there’s a sprinkling of Parmesan on top. When I asked Alessandro he explained that his mother came from a different region of Italy and that’s how she made it. You really can’t argue with anybody who’s making their food based on their mom’s recipe. Still, I didn’t like this quite as much as the sandwiches because the noodles seemed to be slightly overdone in the piece I had. It was good, but I’ve had better. 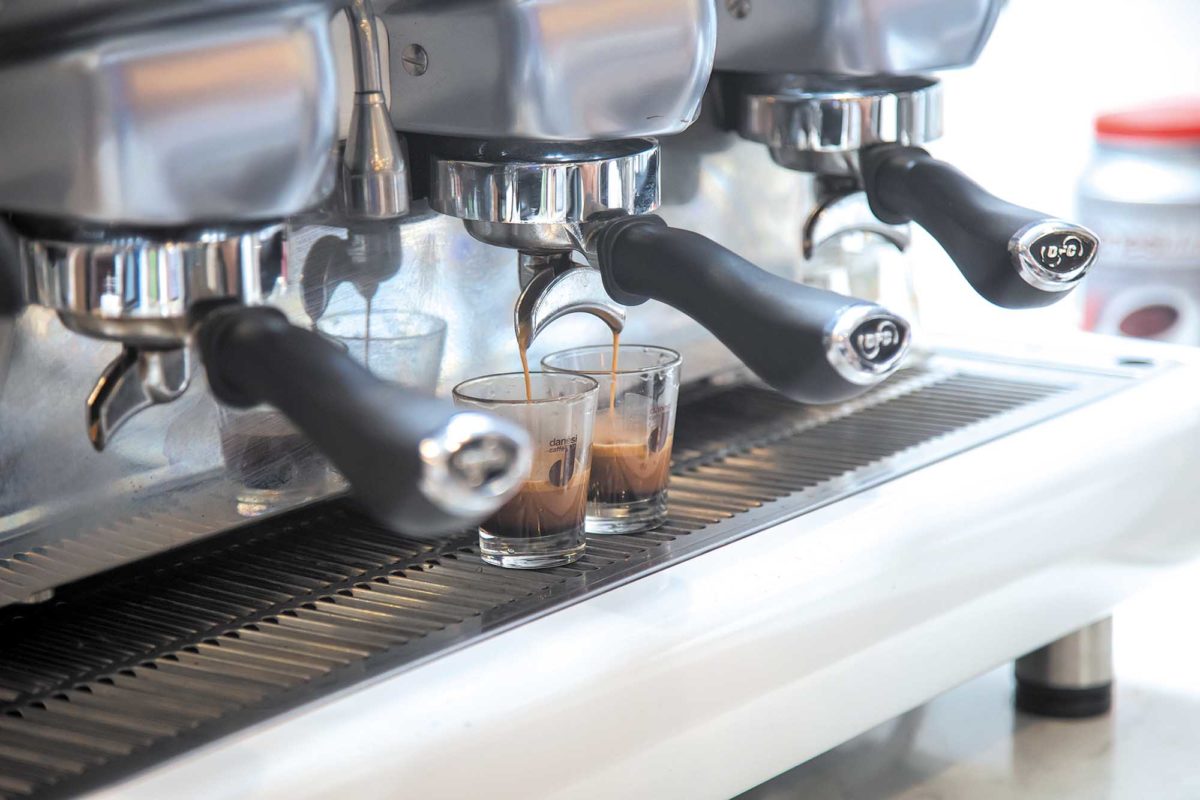 The traditional Danesi espresso machine is imported from Rome.

For dessert, there is gelato, flaky pastries, or cakes, including an excellent crostata jam-filled tart. They come from Eatitalian’s bakery in Gardena, which is the most authentic around. I highly recommend the crostata or the torta della nonna, a lemon custard tart that balances sweet and tart flavors nicely.

A meal here with coffee is slightly higher than chain coffee places, at about $20 per person, but for quality like this, it is worth it. As I stopped to chat with Alessandro on the way out, I noticed an array of Italian car models on the shelf behind him. He mentioned that on one Saturday a month you can see the real thing out in the parking lot. Owners of Ferraris, Maseratis, and other thoroughbreds drive their Italian cars to enjoy an Italian breakfast. It’s early, 7 to 9 a.m., so I’m not too likely to drag myself out of bed for it, but it’s a measure of how the mystique of Italian design is as much a part of the culture in America.