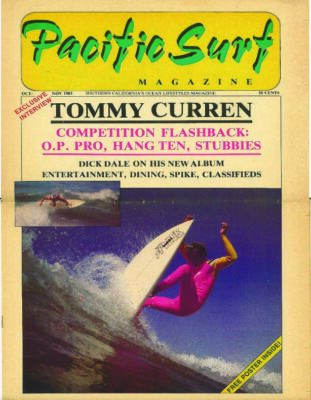 How a buck-toothed surf kid created a surf empire

“Lifeguard Billy Robinson, an amazing surfer, really got me into to surfing,” Jarvis said. “He’s the one who introduced me to Eddie Talbot and Mike Denoune.”

At Mira Costa, he would also be mentored by his art teacher, Mr. Jancar. Jarvis had a natural gift for art, and Mr. Jancar took notice.

Jarvis would spend more time on his work and wondered why other students that he was a better artist then were getting a better grade..

“I’d finish one painting while my classmates would finish five,” he said. “That’s when Mr. Jancar taught me the one thing that would become my marketing mantra, ‘Simplicity is the key to good design.”

Jarvis was beginning to be noticed in the surf world by the mid-1970s by competing in contests and traveling up and down the coast. He didn’t necessarily have a team to help him market himself, say like Mike Purpus’ “Hot Lips” team. Jarvis was more of a lone wolf.

“I’d make the trek down to surf Trestles,” he said. “After catching a pretty good set wave an older guy came up to me and gave me a compliment. That older guy was Jim Kempton, editor of Surfer magazine.”

“I always stopped by the Surfer magazine office on my way down south just to say hello,” he said. “It’s where I met and became friends with a lot of other pro surfers and leaders of the industry.” 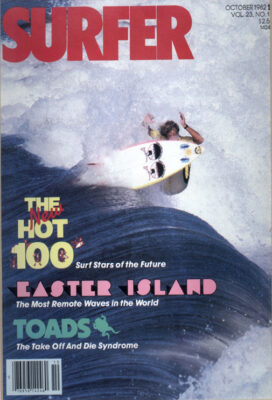 Dennis Jarvis on the cover of Surfer Magazine.

In 1978, fellow South Bay pro Mike Benavidez invited Jarvis to South Africa with him to surf in a contest at the Bay of Plenty in Durban. On the trip, Jarvis had issues with the equipment he was riding.

“What I was riding from home didn’t translate to South Africa waves,” he said.“I went over to Safari Surf in Durban and exchanged my boards for materials and time in the bay and the glass shop. I lost my first heat but my board worked real well.” 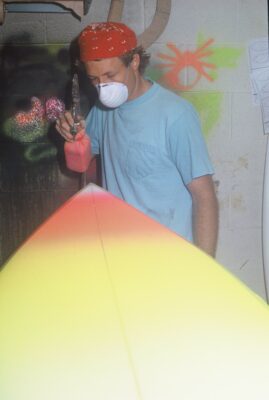 In the late ’70s, Spyder Surfboard shaper/owner Dennis Jarvis crafted boards for the likes of Mark Cuff, Matt Warshaw, Mark Theodore, Allen Sarlo, and a young Chris Frohoff.  He also began shaping for many of the top 16 in the world like Derek Hynd and Cheyne Horan.

“I was shaping boards for competing surfers, and I was surfing against them,” Jarvis said, laughing. “We were all friends.”

“I was experimenting with twin fins, thrusters, and quad designs, surfing a lot of Newport,” Jarvis said.

During the early ‘80s, Jarvis would make key relationships that would transcend perfectly into his life after a professional surfer/shaper.

“As a traveling pro, I befriended Bob [Hurley] who spoke at my Walk of Fame Speech, Paul Naude who is a sweet guy who was the CEO of Billabong and just launched Vissla,” he said. ”Being a solo guy, it was easy for me to click into the little  surf scenes up and down the coast.”

After scoring a cover for Surfer in 1983, Jarvis pocketed his check and took it right to the bank.“I made $4,000 from that shot. I went to deposit it and realized I had $33,000 in my bank account,” he said. “I was going to go buy a Porsche or something but on the way home I saw the wig shop on the corner of Artesia Boulevard and PCH for lease — between an old t-shirt shop and a huge liquor store.”

Dressed in full surf styling. complemented with a layer of foam dust from shaping duties, Jarvis viewed the rental and was given the keys by the landlord. He went home that night to celebrate. During his celebration, he had a urge.

“I went back to the shop and started busting walls with a sledgehammer. After blasting one of the walls, there was a silver surfer [figurine] was inside one of the walls,” he said. “Needless to say, I had  a couple months advance rent and the deposit the next morning.”

In 1983, Spyder Surfboards was launched. With the relationships he developed during his competition days, Jarvis got the top tiers of the surf industry on his shelves. By the mid to late 80s, with surf fashion becoming a mainstream fad, Jarvis with the help of managing partner Dickie O’Reilly would take Spyder to the landmark status.

“I have to thank Richard “Dickie” O’Reilly, my managing partner, for being instrumental in keeping Spyder on an even keel through the chaotic surf industry,” he said. 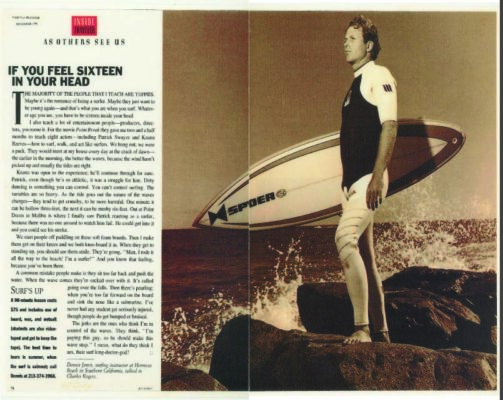 In the late 80s, Jarvis dabbled working as a part time actor. Besides working a few commercials, he worked as an extra and technical on Point Break and in the process befriended directors James Cameron and Kathryn Bigelow. Jarvis handled all the surf aspects including teaching the cast how to surf and hiring additional surf doubles like Matt Archibold, Vince Klyn, and Dino Andino.

“Patrick Swayze had a $500,000 clause that he’d surf in the movie for close-ups,” Jarvis said. “The wave Keanu Reeves catches at Leo Carillo, that’s his first wave standing-up ever.”

With his experience, he would go on to advise on other features. As for being in front of the camera, those days were done.

Jarvis realization also affected how ran Spyder. Jarvis stepped back from being the total image of the the brand. He then orchestrated one of the hottest surf teams of all time and brought Spyder to the forefront of the surf industry and surf culture.

By the early ’90s, Jarvis’s boards were seen frequently under the feet of the “Momentum Generation,” surfers inspired by Taylor Steele’s decade defining movie “Momentum.”

“I really have to thank Mike Balzer and Greg Browning,” Jarvis said. “Greg was a part of the whole Momentum generation while Balzer helped document it.” 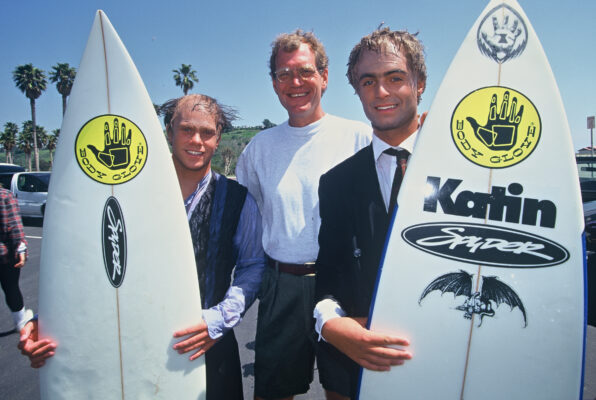 With Browning being Jarvis’ roommate, a lot of pros ended up shacking up at the household.

“One night at the house, Donovan Frankenreiter spent the night and was like ‘Me and Gerr [Brad Gerhlach] are out [riding for Xanadu]’,” Jarvis said. “It all clicked and I had an opportunity that I couldn’t pass up.”

With his success, Jarvis opened up Spyder II on the Pier Plaza at the same time he started Spyderbilt Clothing. With “15 ghost shapers,” the retail shop, and the Spyderbuilt, Jarvis was spending eight hours a day in Costa Mesa working the business aspect of the company and four hours a day in the surfboard factory in Gardena.

“In the factory, I’d be fixing 200 shapes at a time getting them to my standards — it was tedious,” he said. “I was dusty and crusty and decided to scale back.”

Part of scaling back for Jarvis meant increasing his efforts into giving back to the community that created him. He has sponsored the Mira Costa Surf Team since 1993, the South Bay Boardriders Club and running the South Bay Scholastic Surfing Association for the last two years (with his main man O’Reilly as the league director). For the last eight years, Spyder Surfboards has organized and sponsored the Spyder Surf Fest and LA Surf Awards.

“You’ve got to give back to get the stoke back,” he said. “What keeps my industry thriving is to stoke out that 12 to 14 year old grom. If not, I am out of business.” 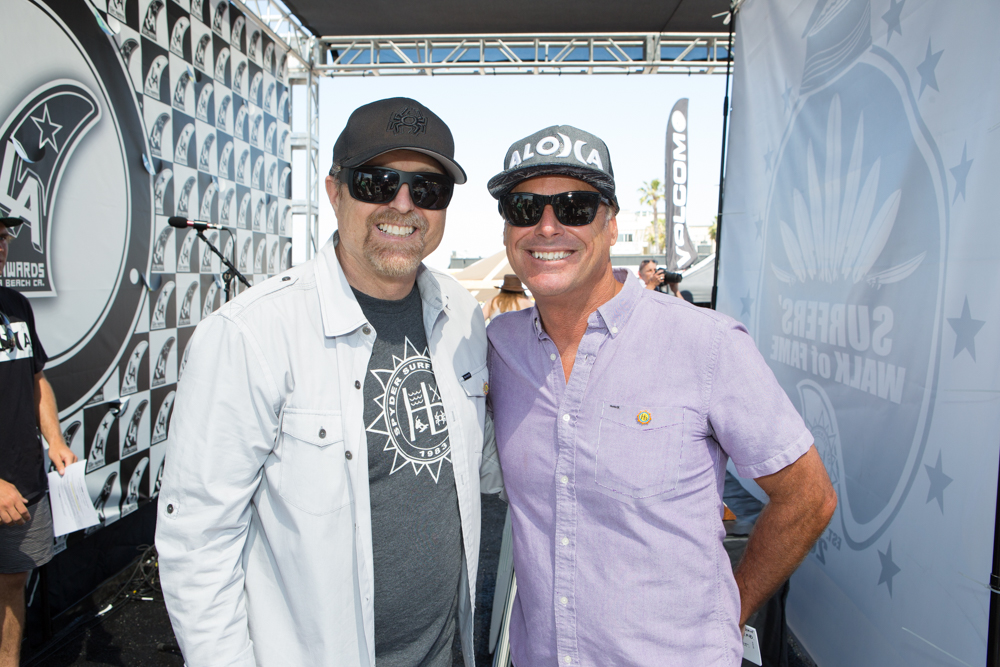 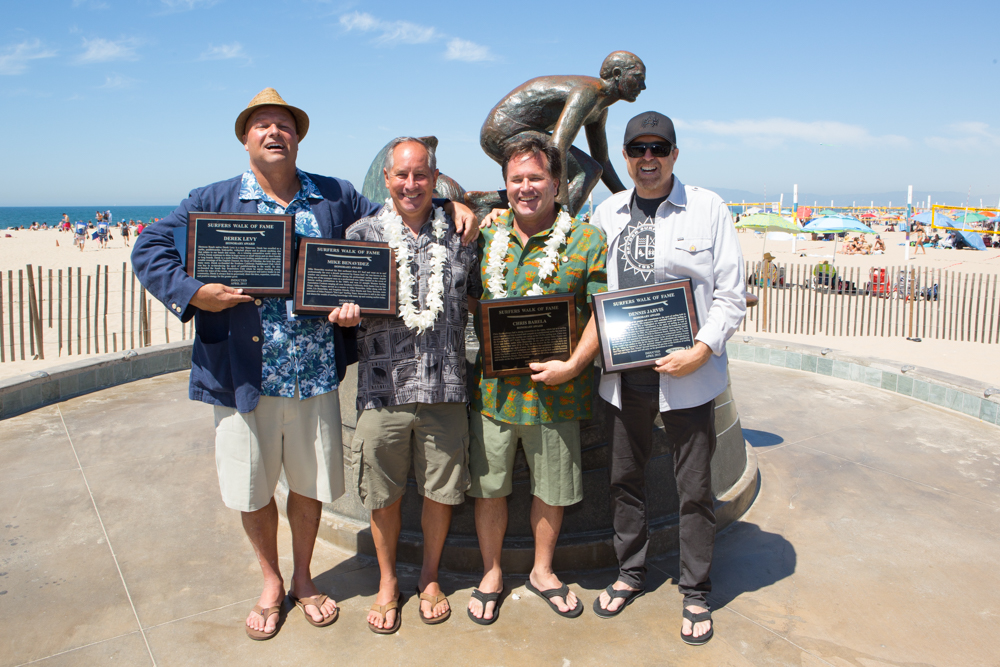 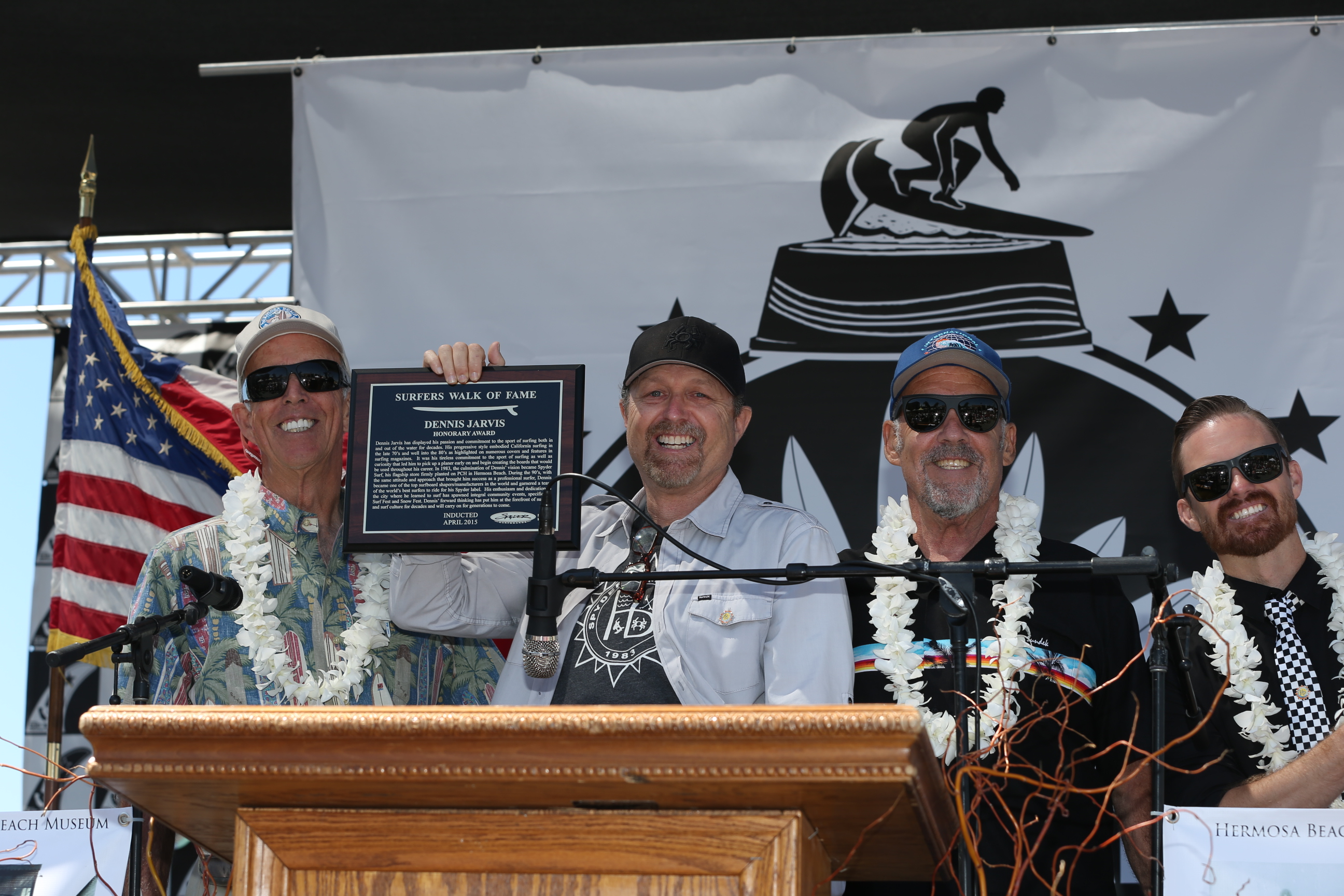 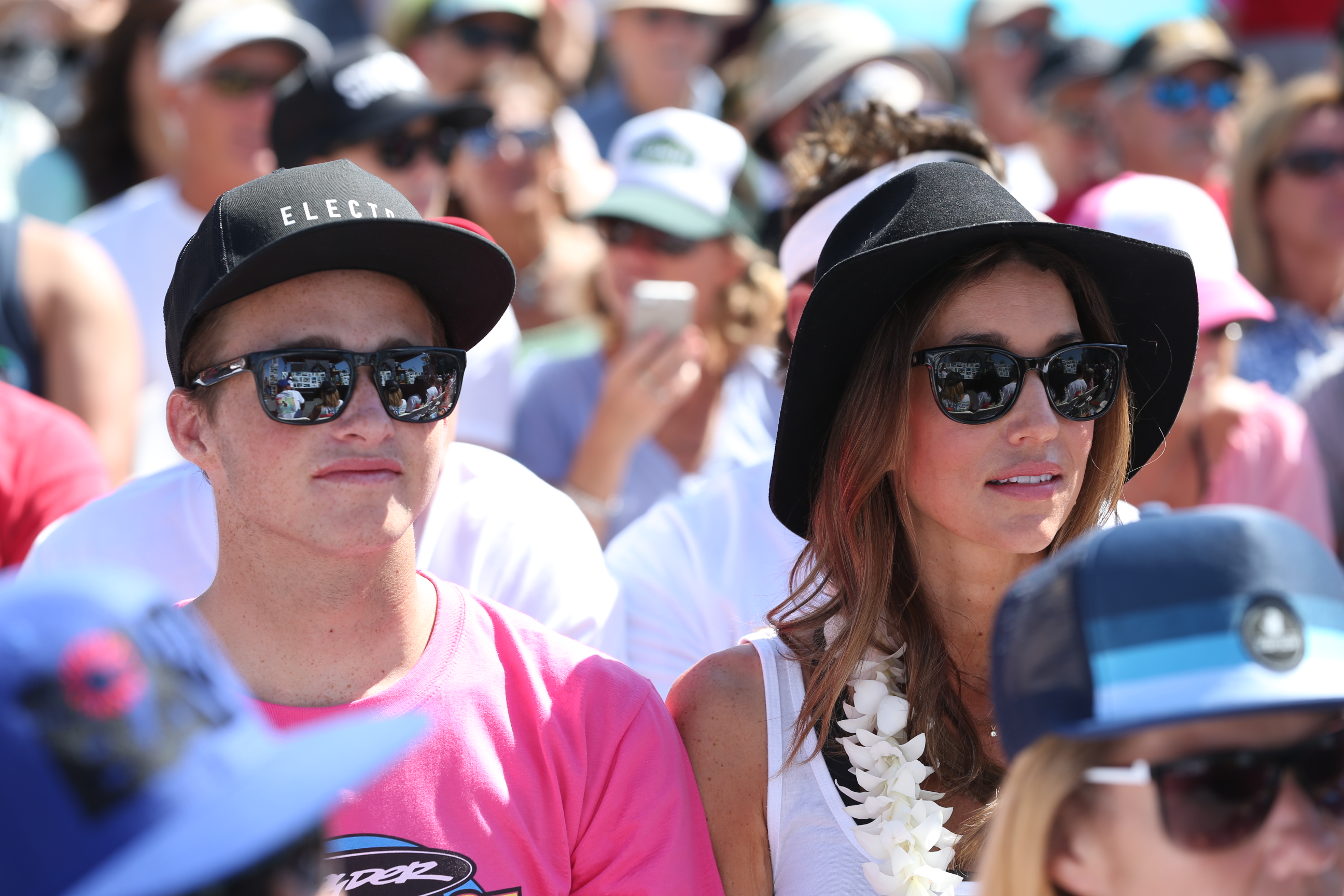 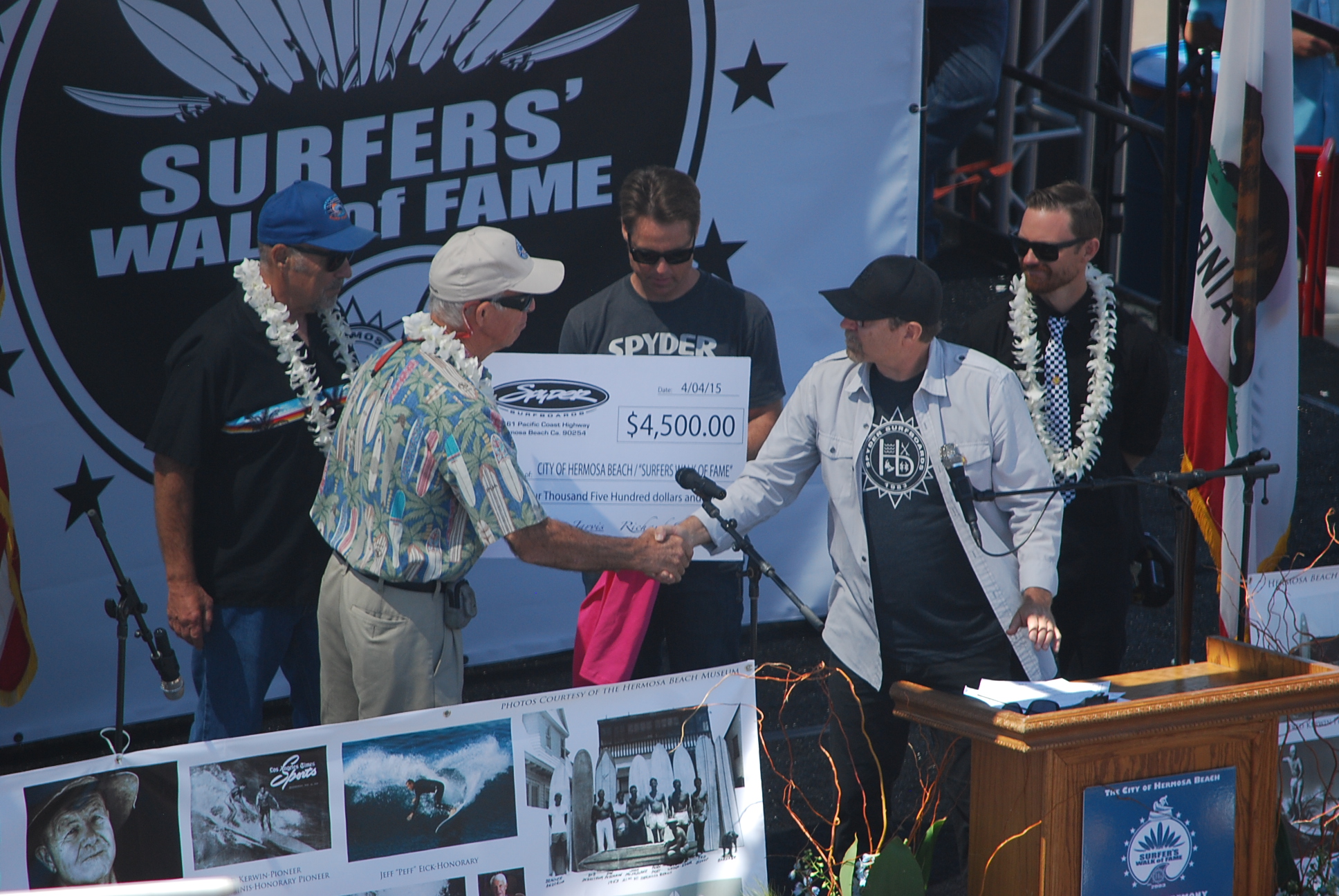 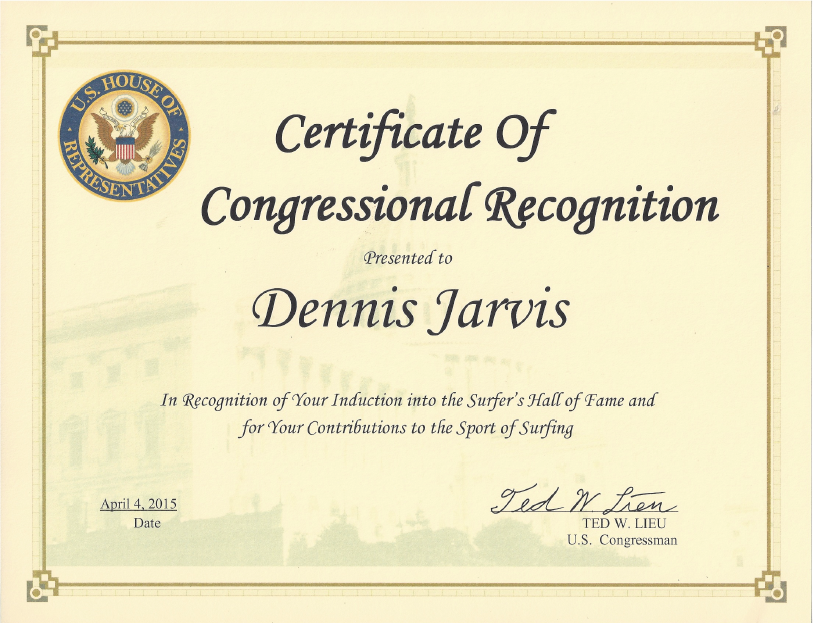 After producing 75,000 surfboards, getting the most industry publicaion covers of any local surfboard manufacture since the1960s (three of which are Jarvis), influencing and directly helping countless groms get their start, and running a successful local surf mecca for 31 years and counting, Jarvis was elected to the Hermosa Beach Surfing Walk of Fame last Saturday.

“It is truly an honor to stand next to Chris, Mike and Derek as we are inducted in the Surfers Walk of Fame together. I am humbled to have my plaque alongside those who have come before me,” said Jarvis, “I can’t put into words how amazing it feels to be recognized by my hometown and the surf industry who have been really good to me and my family. Thirty years goes by fast when you get to do what you love for a living.”

In part one, a self-proclaimed “poser,” Dennis Jarvis uses his experience as a South Bay youth  (including vaseline in the hair, see-through volleyball shorts, and a jockstrap, at one point) to prove himself as a real surfer. Check it out: easyreadernews.com/94626/dennis-jarvis-surf-walk-of-fame/