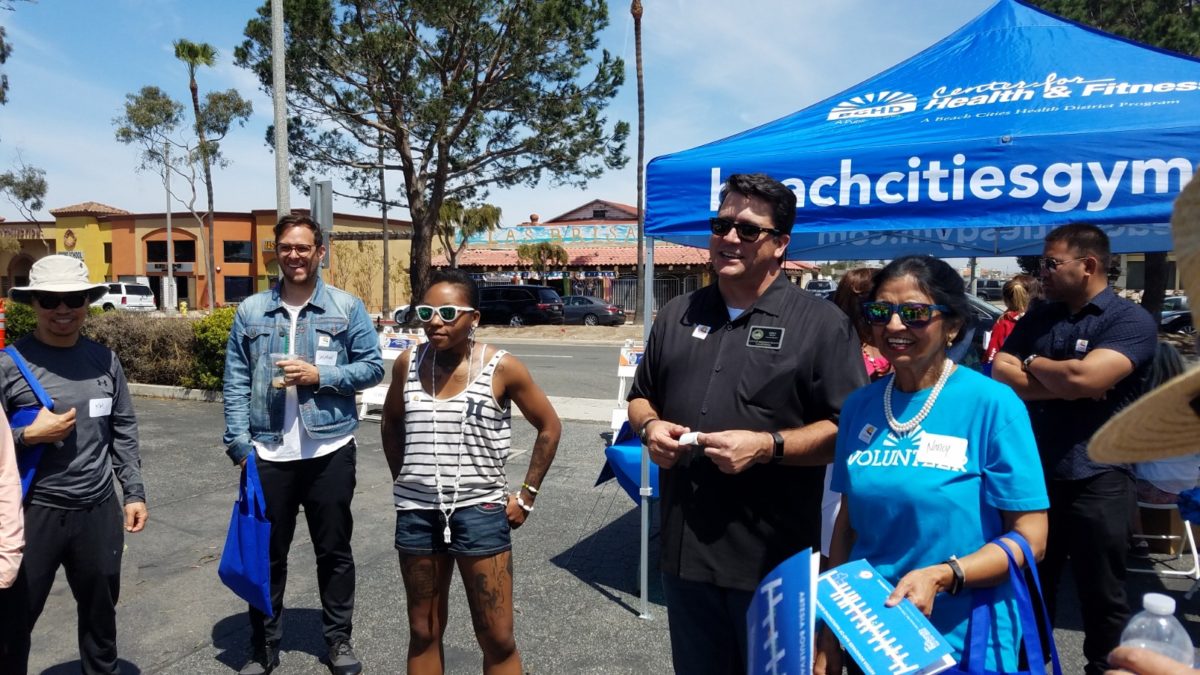 “You can get anything you need here – mattresses, cars, mani-pedis, things for kids, pets Everything is on this street,” said NRBBA President Heidi Butzine. “It’s a tight-knit community, and I think there’s pride in being in North Redondo.”

This was the fifth year for the WalkAbout, and it came during a period of renewed focus on Artesia Boulevard. Last year, the Redondo Beach City Council approved $500,000 in funding to upgrade the economic corridor with landscaping improvements and bench, trashcan and light pole replacements.

In April, the City Council also approved $32,982.50 in matching grants for the first round of the city’s Storefront Improvement Program. Five businesses will be reimbursed for projects, from replacing storefront glass and installing murals, to complete facade overhauls.

Bridget Beach, a long-time resident who was on the WalkAbout with Orange County transplant Diana Londyn, has seen the incremental change.

“There are a lot of new structures, and intermittently I’m seeing different stores taking over different spaces,” Beach said. “Some places are even coming in from different areas of LA, and I think it’s wonderful.”

The Beach Cities Health District also came out in support of the WalkAbout. The event’s active, social nature fits in well with the health district’s principles.

“We had a gentleman who arrived by himself and asked if there was anyone he could walk with, and we were able to have him meet a group of ladies from one of our moai walking groups,” said BCHD Blue Zones Project Director Lauren Nakano. “It was about people getting together and meeting new friends — that’s in the highlights.”

Artesia Boulevard’s changes haven’t come without controversy. The street is anchored at its east end by the South Bay Galleria, which has had its redevelopment plans put on hold by a series of appeals by residents, activists, and neighboring Lawndale.

The next phase of the Galleria often called Redondo’s “economic engine” as a tax revenue generator, is seen as a potential kick-start for the rest of the area, but opponents are concerned about increased traffic generated by a proposed housing component and increased retail space.

“You can’t please everyone. People are exercising their right to voice concerns, and that’s valid,” Butzine said. “It’s challenging to get these things moving, I know, and I hope it goes forward smoothly. People don’t like change… and that’s not always best for the long-time viability of a city, or a business.”

Councilman Christian Horvath was pleased by the growth the event has seen. He and fellow Councilman John Gran were members of the NRBBA when the first WalkAbout was organized.

“This is the next place that truly needs the attention and it’s not just electeds saying it, but people in the neighborhoods who want to have an experience with Artesia or Aviation Boulevard the same way people in South Redondo have with Riviera Village,” Horvath said. “It’s up to us to set the vision and tone to get to that position, and turn this into the Main Street it deserves to be.”