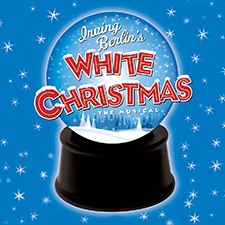 It’s a White Christmas at the Norris Theater this weekend.

Irving Berlin’s musical, “White Christmas,” produced by James Gruessing and directed by Randy Brenner, can set anyone in the Christmas spirit. It’s onstage at the Norris Theatre through Sunday.

This Broadway musical adaptation of the Paramount Pictures film that starred Bing Crosby and Danny Kaye, Rosemary Clooney and Vera-Ellen, follows two World War II comrades, Bob Wallace and Phil Davis (Brent Schindele and David Lamoureux), from the battlefield to the television screen. Despite his flamboyant personality onscreen, Bob is a man driven by his career and could care less about romance and women. When a letter brings Bob and David face to face with two beautiful singing sisters, Betty Haynes and Judy Haynes (Gail Bennett and Tro Shaw), Phil and Judy instantly hit it off while Bob finds it hard to warm up to Betty. However, when Bob learns that an inn owned by his former Army commander, General Waverly (Michael Prohaska) is in jeopardy of foreclosure, he and Phil team up with the sisters to put on a Christmas show that not only saves the lodge but also the holiday spirit of its residents.

The theme of friendship and brotherhood rings loudly throughout the play, especially in the first act where soldiers huddle up to sing Christmas songs such as “Happy Holiday” and “White Christmas.”

After the war, Bob and Phil become showbiz stars, and because their future is so bright they do not spend much time wallowing in the past. However, General Waverly wants to reenlist in the army in hopes of reliving his glorious days as a respected general. Prohaska does a great job of portraying the stern and cold general; yet, at the same time, there is warmth and kindness in his eyes when he is around his granddaughter, Susan (Ashley Jewel Reynolds). The general is a relatable character in that most people are so nostalgic about their past that they cannot open their eyes to the happiness right in front of them.

However, this musical is not all about the melancholy of the past because it is also packed with comedy and romance. Polly Seale is hilarious in her role as the flamboyant Martha Watson, the receptionist at the inn. Her “Let Me Sing I’m Happy” shows that there is more to this small town girl than meets the eye. Karl Jaecke who plays the oblivious farm keeper, Ezekiel, lightens up any situation when he walks on stage.

Although Jim and Betty’s flirtatious romance is entertaining to watch, it is Bob and Betty’s relationship that truly shines. These two stubborn and proud characters cannot wait to get away from one another; yet at the same time they cannot help their mutual attraction. Bennett and Schindele portray their characters very well. Love doesn’t always have to refer to romantic relationships. As a war veteran who views himself as obsolete without his rank and title, the General’s granddaughter shows him that he is still important, and heroic in her eyes.

The hair, makeup, and costumes transport the audience back in time. Women with their big, fluffy hair and long and colorful dresses look very flirty and feminine. Men, with their suits and hair gelled back remind us of when chivalry was definitely most alive.

The show features popular songs such as: “Blue Skies,” “Sisters,” “Counting My Blessings,” “The Best Things Happen While You’re Dancing,” “Snow,” “I Love a Piano,” and the well known title tune. Musical director Daniel Thomas did a wonderful job choosing the songs for the musical that truly capture the essence of the story.