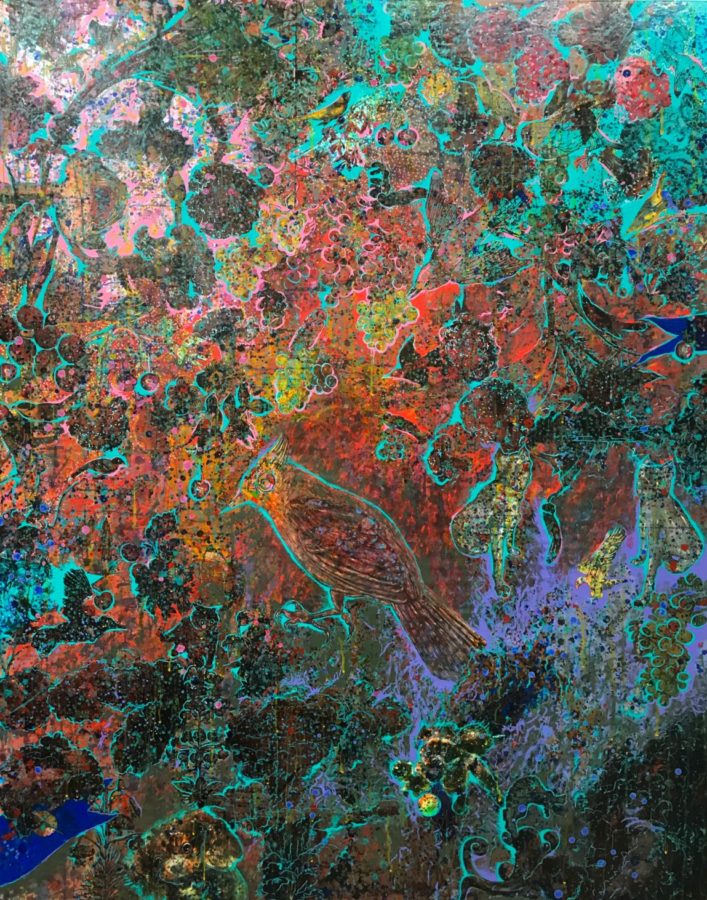 “The Other Eden” (acrylic and image transfer on canvas), 2017, by Barbara Strasen

Over, under, sideways, down

No one should be surprised, when standing in front of a painting by Barbara Strasen, to find themselves drawn forward into its depths, under or just behind the surface images where other images are waiting. It’s a bit like swimming through a gently swaying kelp forest where ocean currents allow one glimpse, one perspective, and then another.

Strasen is currently in a five-person group show, “Layer Upon Layer,” which opened Wednesday, Nov. 20, in the El Camino College Art Gallery. Strasen will speak about her art at the gallery on Tuesday, Nov. 20. Curated by Susanna Meiers, the exhibition also features the works of Terry Braunstein and Victor Raphael, Jenny Okun, plus, in another collaboration, Victor Raphael and Clayton Spada.

A few years ago, Strasen was given a solo show at the Long Beach Museum of Art, a show called “Layer by Layer.” So clearly layering is a key exponent of her work. We met at her studio in San Pedro, where she explained the ideas and concepts that interest her, and how she threads them into her art.

Layering isn’t merely the act of applying one coat of paint over another. No, we’re talking time, space, chronology, things gliding over and through one another.

“I repudiate linear time because it doesn’t fit my experience,” Strasen says. “Start/finish, black and white dualisms, yes and no, just doesn’t fit. It’s all mushy and gray.” We numerically order our daily tasks and to-do lists because, she adds, “we live in a Western-developed civilization and that’s how you’re supposed to do it. But if we really look at our consciousness we’re more like squirrels or hamsters.” 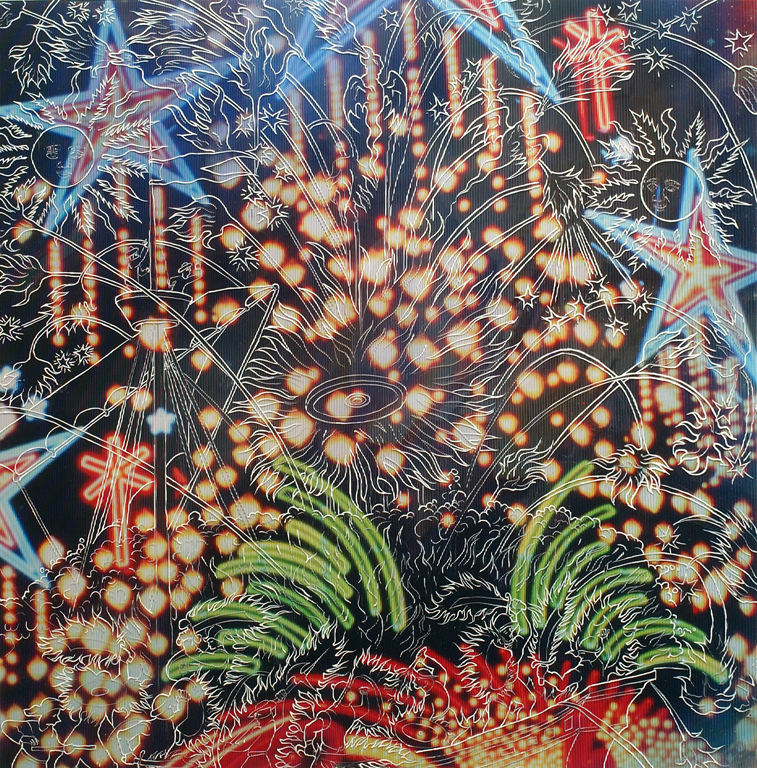 We zigzag from one chore or thought to another, short-term memories colliding with long-term memories. Although there may be the illusion of ordered sequence, mentally we’re all over the place. In short, “If we really map consciousness, it’s going to look nothing like the concept of linear time.

“And then (there’s) layering images,” Strasen continues. “The thing I love to do more than anything else is to take images that seemingly have nothing to do with each other, but when I put them together connections appear. And then, when I tweak them a bit, I make it so that anyone else can see them too.”

However, some balancing is required because of the danger of being too obvious on the one hand and too obscure on the other.

“So you have disparate images,” Strasen says, “and they’re combined in terms of painting (on paper or canvas) or painting lenticulars.” Lenticulars are those textual images, or laminated plastic sheets, with thin vertical ridges that cause an image to change or to give the illusion of depth when the object is tilted back and forth. The effect is often like having stereoscopic (3D) vision without the need for stereoscopic glasses.

The next step or challenge is to get the viewer to stop and examine the picture. In this day and age (but probably in other days and ages as well) that’s not so easy. 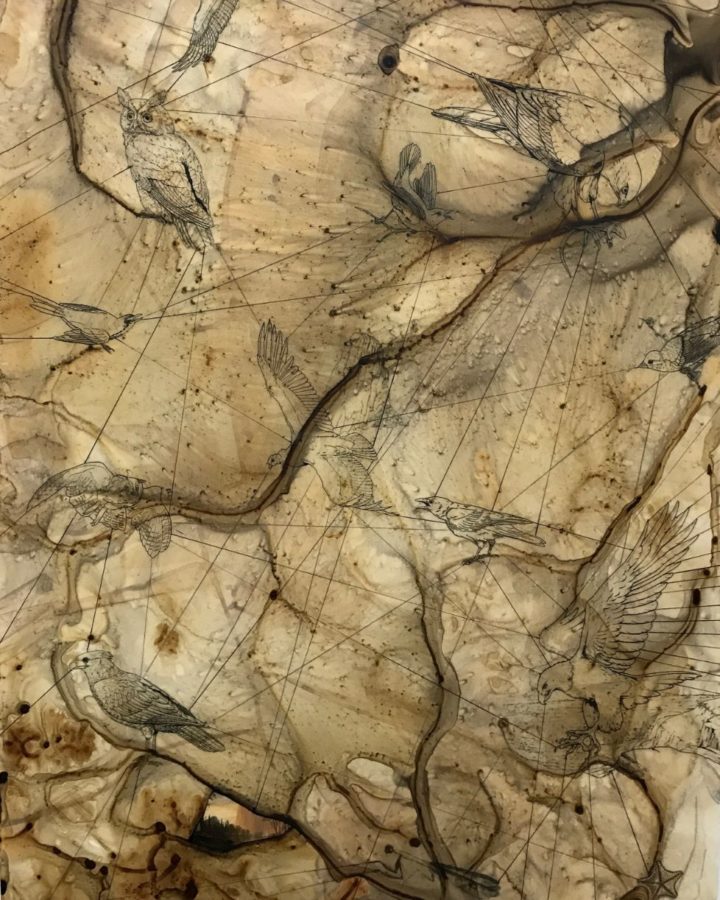 “Aviary” (acrylic on Yupo, mounted on museum board), 2017, by Barbara Strasen

“The way I do it,” Strasen continues, “is to try to make colors so arresting that you just want to get in there. You have to kind of do a hook, which is the same hook that works for me. So, I figure colors as sort of bait, and once we’re scouting around in there the connections begin.

“Because also part of what I want to do is slow people down. With Facebook and Instagram and tenth-of-a-second commercials, how do we do that? Well, we give people more things to think about and we don’t package them in teeny-tiny soundbites. We give people chunks of ideas and we give (them) a little path in, and we give people the option to make their own connections and then mull over them at leisure.”

As the average attention span seems to recede, the artist, in whatever medium, needs to be more clever or strategic, not necessarily pandering to the prevailing trend but by utilizing, in Strasen’s words, the right bait.

“And then there’s music,” Strasen says. “Early in my life I played piano and was deemed good enough that my teachers were telling me I could be a concertizing pianist. Before that it was art, as a kid, art-art-art. Then art got boring in my schools, so I got really serious about music. My favorite music was Baroque composers Bach, Telemann, and Handel. Especially Bach because of the front-to-back weavings: You take a pattern and you flip it upside down; you stick it in there and you put another pattern in front; you turn it sideways. It’s that pictorial flipping and weaving, front and back and side to side that really grabbed me.”

The path to becoming a concertizing musician went nowhere, Strasen says, “because I hate performing.” Nonetheless, the lessons weren’t in vain. “In one sense I’m trying to do Bach over and over in art-making. It’s always there. There’s some bunch of neurons that are vying up to do that.” 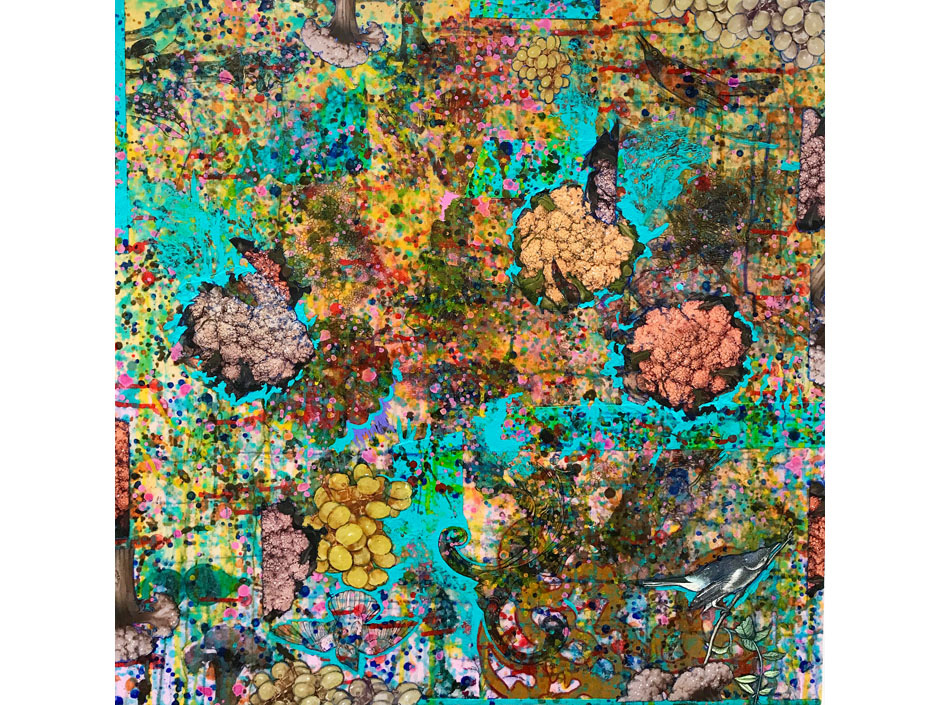 Strasen’s art is distinctly contemporary, but her influences are wide-angled, from Albrecht Dürer and William Faulkner to Andy Warhol.

“For me, Andy Warhol is one of the most important artists of the last 100 years. If he made only one series in his life, ‘The Death and Disaster Series’ (comprised of car crashes, suicides, electric chairs, etc.), he would still rank as numero uno because he would make a silkscreen of a dire event and repeat it, maybe 12 times on a canvas, and he’s giving up a psychic wallpaper map.

“It’s the way we experience something that just jolts us in our daily life, like something we read or a headline. Then we think ‘Oh my God!’ Boom, it’s an impact. Then we think about it more, and then less, and less and less and less, until it becomes our psychic wallpaper. And then we overload it with another event, which has the same impact, and we turn that into psychic wallpaper. That’s the reason why Warhol really counts for me.”

Earlier we’d been talking about the L.A. riots in 1992 and the Rodney King video that preceded them. Strasen had shown me a lenticular image of hers in which, from one angle, we see an 18th-century pastoral scene on toile, or decorated linen (blissful shepherds, shepherdesses, cozy lambs, that sort of thing), and from the other angle a brash moment during King’s assault.

While this isn’t exactly what Strasen was visualizing with Warhol’s silkscreens and lithographs, in my view the media, and in particular the television media, amped up the event, that is, the video clip of Rodney King being pummeled by nightsticks, by replaying it over and over until subconsciously we were seeing dozens of black men being attacked by hundreds and maybe thousands of cops. What was a horrific, but isolated, incident became a prolonged massacre.

One can debate whether the multiplicity blunts or intensifies our memory of what happened. As we look back some 27 years, Strasen wonders aloud: “How do we process this in time? It still has an impact but it’s been neurologically superseded by all this other stuff. But then somehow it leaps forth and jumps over (more recent dire events) and then weaves back in, so we’re getting a 3D weaving.”

All of which underlines and supports what Strasen said earlier, about linear time-hopping this way and that, about Bach’s designs and interacting patterns. Each time we recall something traumatic from our lives, we place it front and center, and at the same time, the emotions that went with it are revived. In one sense or another, it’s all psychic wallpaper, layer upon layer of it that somehow is always in flux. 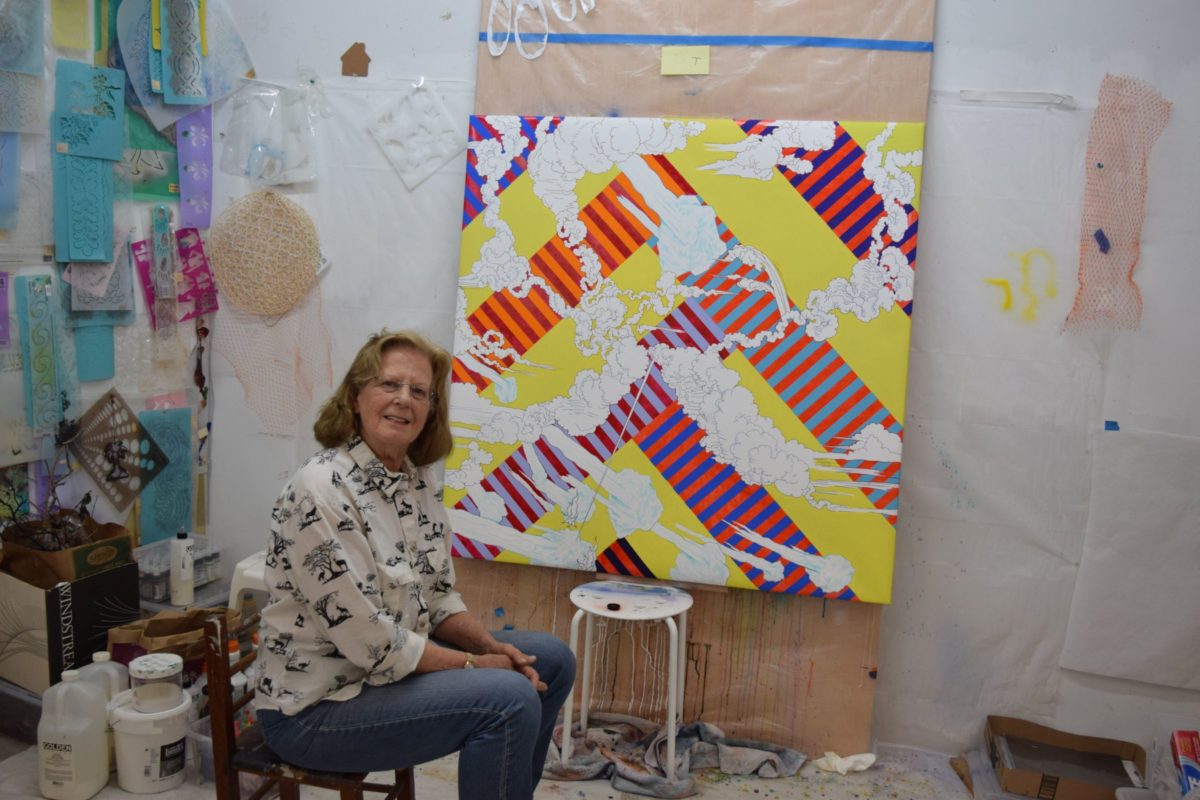 Lastly, if we’re going to loosen the webbing of linear time, we may also find ourselves probing the physical laws of cause and effect, especially since, for an artist, ideas may be fomenting at a subliminal level.

“I’ve always had the sense that when I make something in a work of art, that predicts what’s going to happen in my life,” Strasen says. “I mean, it’s weird, but it’s a predictor in a lot of ways.”

Asked to elaborate, she replies, “I could kind of take that apart and figure it out if I had another week.”

I mention that I’ll be checking back with her. But what Strasen has said is not without precedent among artists. In “Dark Back of Time,” for example, Javier Marias remarks, “I sometimes have the feeling that you must be careful about what you makeup and write down in books because occasionally it comes true.” This sort of foreshadowing is also something that Graham Greene refers to a couple of times in “Ways of Escape” (“…but what struck me with some uneasiness, when I reread the book the other day, were the suggestions to be found in it of where the future was going to take me.”).

Strasen says yes and that she’s sure this applies to many other artists.

“There’s a core group of ideas. Boom-boom-boom, and they’re pretty constant. And the only way that I find that they’re constant is in retrospect.” She elaborates. “It’s not a flat surface of core ideas, it’s a volume.” A conceptual 3D mass; imagine an intangible potato. “And I poke at them from different directions and [with] different media. Like I’ll poke at them with lenticular works or I might make paintings and cut-outs, who knows what. The core ideas are pretty constant, but the manifestations vary. That’s the reason why an artist’s retrospective is always interesting, because you see the core ideas and then you see all the themes and variations in things.”

Maybe we’re also seeing the predictors, albeit in hindsight. That’s to suggest that somewhere, in the future, just over the chronological horizon, they’re about to hatch. “What will be already is,” Clarice Lispector wrote. “The future is ahead and behind and on the sides. The future is what has always existed and always will exist.”

Chalk it up to whatever you want, a conversation with Strasen about her work conjures up thoughts and questions such as these.