Burgers on the beach bike path 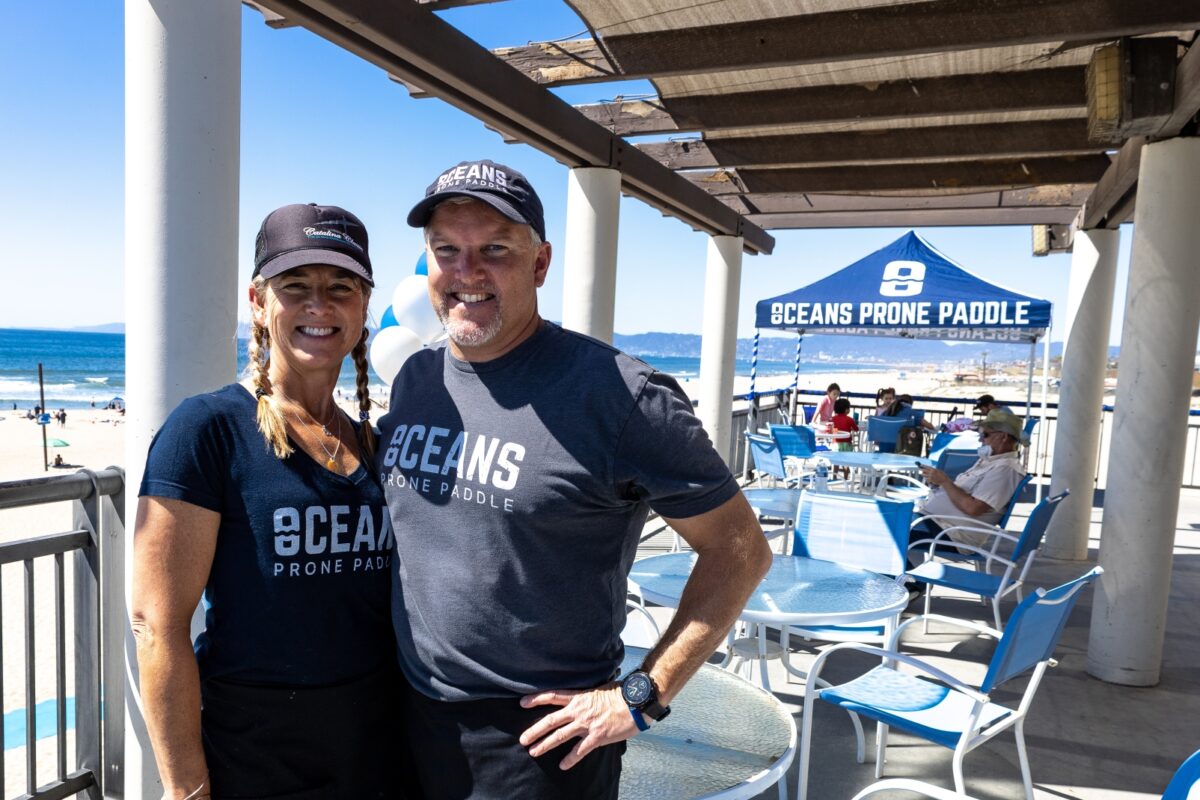 DJ Wilson and Kurt Fry on the patio at Oceans Cafe & Grill. The couple also own Oceans Prone Paddleboards and hope to make Oceans a destination for ocean enthusiasts, as well as bicyclists and beach goers. Photo by Kevin Cody

DJ Wilson and Kurt Fry on the patio at Oceans Cafe & Grill. The couple also own Oceans Prone Paddleboards and hope to make Oceans a destination for ocean enthusiasts, as well as bicyclists and beach goers. Photo by Kevin Cody

The August Saturday morning was unseasonably cool and gray, with a light breeze adding to the chill. I looked at the cloudy skies to the west and rejoiced – it was beach weather!

Yes, I prefer to go to the beach when it’s cool rather than hot, and I always have. It’s not just that I have fair skin and sunburn easily, it’s about the general environment. Overcast days are peaceful and less crowded, more suited to meditatively watching the waves and birds, the surfers riding the waves, the sailboats scudding over the whitecaps in the distance. I understand that the words “Clouds, sand, sea” wouldn’t look as compelling on the City of Manhattan Beach logo, but that’s my preference.

I particularly enjoy that view in the distance when there is a brunch in the foreground, and last week I reviewed the experience at Strand House. Sometimes I prefer a more modest repast (and my wallet always does), so I go to my favorite seaside hideaway, Oceans Café & Grill at Dockweiler Beach. Why there instead of one of the beach food stands elsewhere in the Beach Cities? Three reasons: they have a parking lot right next to the café, the food is decent, and they charge much less than the other beach stands. Wait, there’s a fourth one – the people who run it and work there are friendly.

There are a few challenges, the first of which is finding the place. You might have seen it in the distance as you drive up Vista del Mar, an odd little building with two stumpy towers at the north end of the “Dockweiler Youth Center” parking lot. (If you use the bike path you already know about it, because that goes right by the back door.) Pull into that lot and get close to the cafe, because that’s where the metered parking is – the “pay and display” spaces cost $13 whether you’re there for five minutes or all day. The meters are balky and frequently out of order, but the city doesn’t seem to be issuing tickets on days when all meters are non-functional. (I don’t guarantee this, that’s just my observation.)

It’s a short walk on flat concrete to get to Oceans Café, which makes it a boon for parents with strollers and the mobility challenged, and the dog-friendly patio makes it a gathering place for the canine crowd. There’s a walk-up window for grab and go drinks and sandwiches, or you can grab a table and a server will arrive presently. The menu is fairly basic, variations on burgers, sandwiches, breakfast favorites, and salads, but on several visits everything we’ve had has been well made. 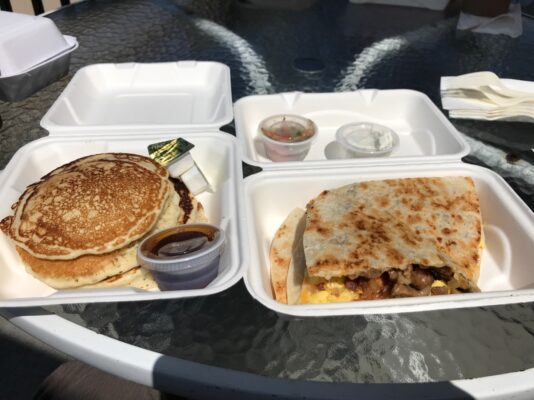 My wife approves of the eggs with bacon with a side of buttermilk pancakes, a mammoth breakfast that will set you back a mere ten bucks. It’s just what it should be, the pancakes light and fluffy, bacon crisp as requested. My preference is the breakfast quesadilla, which is stuffed with cheese, eggs, bacon, mushrooms, tomato, and onions. It’s served with sour cream and pico de gallo, plus hot sauce if you ask for it, which I did. There are plenty of savory flavors here, and I’d rank this with breakfasts in popular spots without a view. The coffee that comes with it is from Peet’s, and refills are free.

On another visit I tried the “lost in the sauce” burger, which unfortunately was accurately named. It was a standard patty and bun with cheddar cheese, red onion, avocado, lettuce, tomato, and pickle, plus a little too much fry sauce. That fry sauce, a mix of mayo, ketchup, vinegar, and Worcestershire with a little cayenne, has a nice flavor but was added a bit liberally so the burger was soppy. The flavor was fine, but I wore part of the burger home on the front of my shirt. It would have been fine if I was one of the swim-suited crowd who was about to jump in the surf, but I wasn’t and didn’t.

On another day my wife ordered the turkey club sandwich, while out of curiosity I has the “S*** Pipe sandwich.” I couldn’t imagine what else those asterisks might refer to other than fecal matter, but was still surprised when the server confirmed that it is named after the outflow pipe from the sewage treatment plant. This is easily the least appetizing name for a food item I have ever had, and that includes a badly translated item called “guts in soup” that was on a menu in Bulgaria. I ordered the sandwich anyway, because it was basically a patty melt with some of that fry sauce mixed in. Get it with cheddar cheese rather than American and it will be a better sandwich, at least in my opinion.

My wife’s turkey club was the classic with bacon, avocado, tomato, and onion, but without the extra layer of toast that is often a feature of the sky-high club sandwich. She found the chipotle mayo a trifle spicy but liked it – if you prefer a focus on plain ingredients ask for regular mayo. The sandwiches come with tater tots (the addictive standard), onion rings (better, and even more so when dipped into the fry sauce), or regular or sweet potato fries.

Breakfast or lunch here will set you back less than $20 per person including tip, making this the best breakfast or lunch bargain on the Santa Monica Bay. It’s nothing fancy, but on a day when you just feel like enjoying the scenery and a basic meal, it’s just the thing.