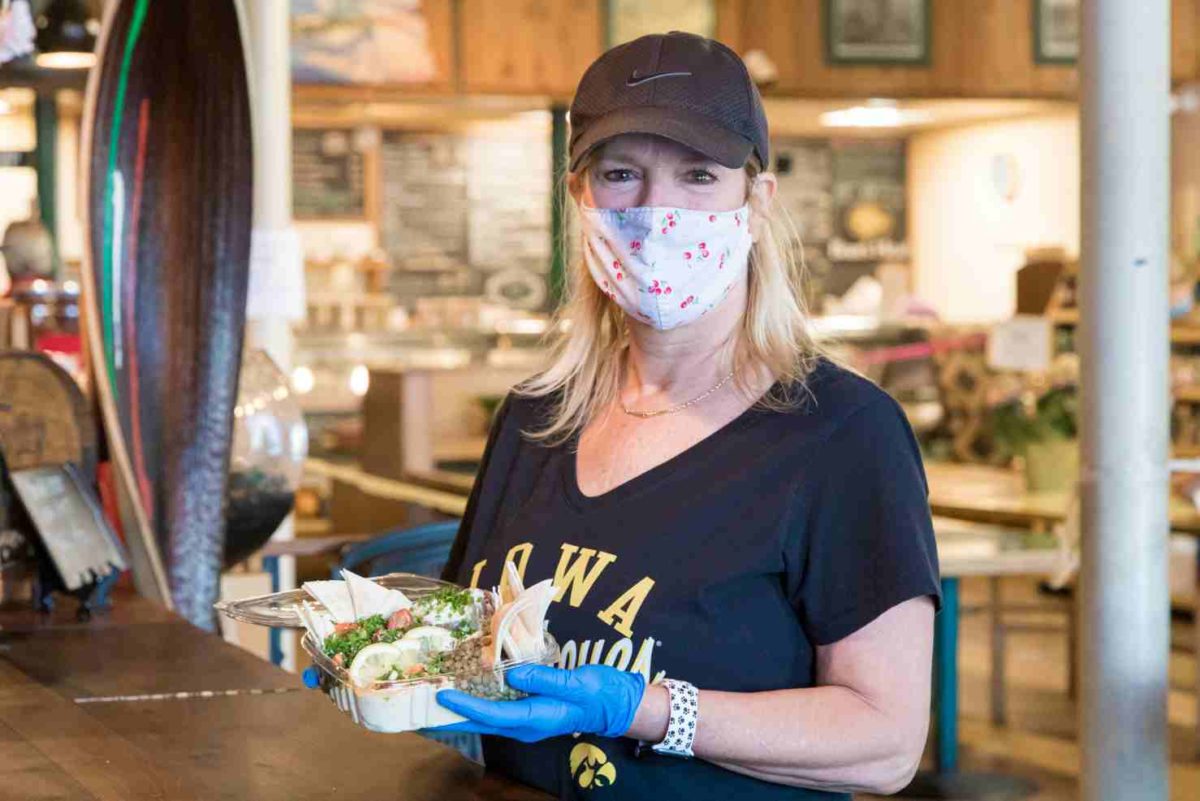 One casualty of the pandemic is the death of spontaneous dining. Two months ago, seeing an old friend at a store might lead to lunch at a nearby cafe or an invitation to dinner that night. Now it becomes a short interaction through facemasks and a promise of a Zoom chat later. The connection has been made, but not with the depth from bonding over a convivial meal.

You can still do something like that if you’re creative, though the logistics are a bit more complex. I was exchanging emails with someone I hadn’t seen for some time even before things started going crazy, and he mentioned that he was going to be watching a live streamed concert that evening. It was something I wanted to see too, and a plan formed in my mind. I have two tables on my patio, and a portable sound system that could hook up to a laptop. Another table a few yards away could serve as a buffet where we could take turns serving ourselves with two sets of utensils. Perhaps we could enjoy dinner and a show together while still following the COVID protocols. I described the idea and after consultation with our spouses, we decided to do it.

Now that we had company for dinner, what’s on the menu? The meal I had planned to make wouldn’t stretch to four people, and time and inspiration were short. A friend had recommended the take-out options from Malaga Cove Ranch Market, and after a perusal of their website we ordered dinner.

You may have been passing their establishment for years without noticing it, because it’s in a corner of the plaza dominated by the famously ornate fountain. They stock standard grocery items and some gourmet foods, but almost half of the space is taken up by a coffee and wine bar and deli. The bar is closed, but the deli is doing a strong business in sandwiches, salads, pizzas, and entrees that have Italian and Middle Eastern overtones.

When I looked at the menu, one particular item popped out as a perfect way to begin the meal — their Mediterranean platter. This is listed as containing hummus, tabouli, spinach salad, and pesto pasta, but you’re allowed to substitute other things from their deli case. So in lieu of the pasta and spinach I asked for lentils and potato salad. I ordered two platters and had one on each table when our guests arrived. Open a bottle of white wine, pull the pita bread out of the toaster oven where it had been warming, and presto, the first course was set to go.

I liked the tabouli best, the fresh, lemony dressing mixed well with bulgur wheat and chopped tomatoes and parsley. The hummus was creamy and mild with relatively restrained use of garlic so the garbanzo flavor shone through, and the potato salad had unexpected herbal notes that made it more interesting than usual. The lentils were simply made and mildly seasoned, a palate cleanser to snack on between other bites. Next time I might order the crab salad instead of the lentils. I ordered a small separate portion of that because I couldn’t remember whether my friend’s wife liked the imitation crab that they use here, and I wanted it separate in that case. As it turned out she liked it just fine, and so did everyone else around the two tables. There was just the right amount of pepper added to the creamy dressing to enliven it, and I might have eaten more of it if we didn’t have so many other things coming.

The Mediterranean platter was more than enough as an appetizer for two. I sent my guests home with the remains of theirs while my wife staked a claim on ours for her lunch the next day. We moved on to the entrees: a whole roast chicken, a medium Mediterranean pizza, and a pound of eggplant parmesan. I had over-ordered more than a bit, and a half-pound of the parmesan would have been plenty for us to have each had a nibble, but the stuff was so good that most of it disappeared. It wasn’t a typical eggplant parmesan at all, because instead of thick layers of mozzarella and marinara there was a modest amount of feta and a thin sauce with olive oil and tomato. The vegetable flavor was front and center instead of smothered, and if you really like perfectly done eggplant instead of a cheese casserole that happens to include it, look no further. It reminded me of eggplant dishes I’ve had in Armenian restaurants, and as the owners of the market are of Armenian descent this may be no accident. 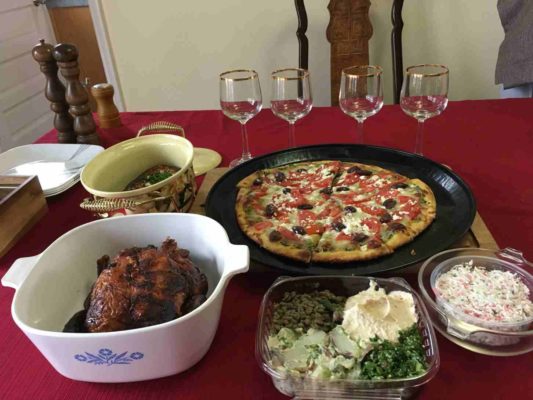 The feast as it looked when removed from the to-go boxes. Photo by Richard Foss

The pizza was more conventional, but no less good. The housemade crust was topped with basil pesto, mozzarella, purple olives, and tomatoes, with just a dusting of feta. Pesto, olives, and tomato are a common combination on pastas, and they performed even better in this setting. I had kept it in a warm oven while we finished our appetizers and the crust crisped a bit more than I intended, but it was still a first-class pizza.

I had been slightly disappointed in the rotisserie chicken when I unwrapped it because it was on the small side, but it turned out to be plenty along with the other items. The plump bird had been stuffed with rosemary and rubbed with mild spices that tinted it a deep orange when roasted. As is often the case with rotisserie chicken, it was so tender that it was very easy to carve. A moment’s work with a fork and kitchen scissors left it in six pieces without me ever touching it. It was moist and luscious and a bargain at 10 bucks a bird. The online menu warns that they sometimes run out, and I can see why.

The only consequence of our planning this dinner at the last minute was that the bakery section at Malaga Cove Ranch Market was almost sold out when I arrived. This turned out to be less of a problem than I expected because our guests brought something, but in the future, I’ll know to ask them to save some banana bread or brownies.

After dinner we fired up the computer for the concert, which unfortunately was plagued by technical difficulties. The much-anticipated show was a bust, but the evening was a success anyway thanks to good food and good company. We controlled our reflexive tendency to hug them as they said goodbye, but we let our conversation and hospitality do the embracing for us. We hope the day will come soon when we won’t have to worry about physical contact, but we now know that a little planning and an order from the right place will help keep our social connections alive.