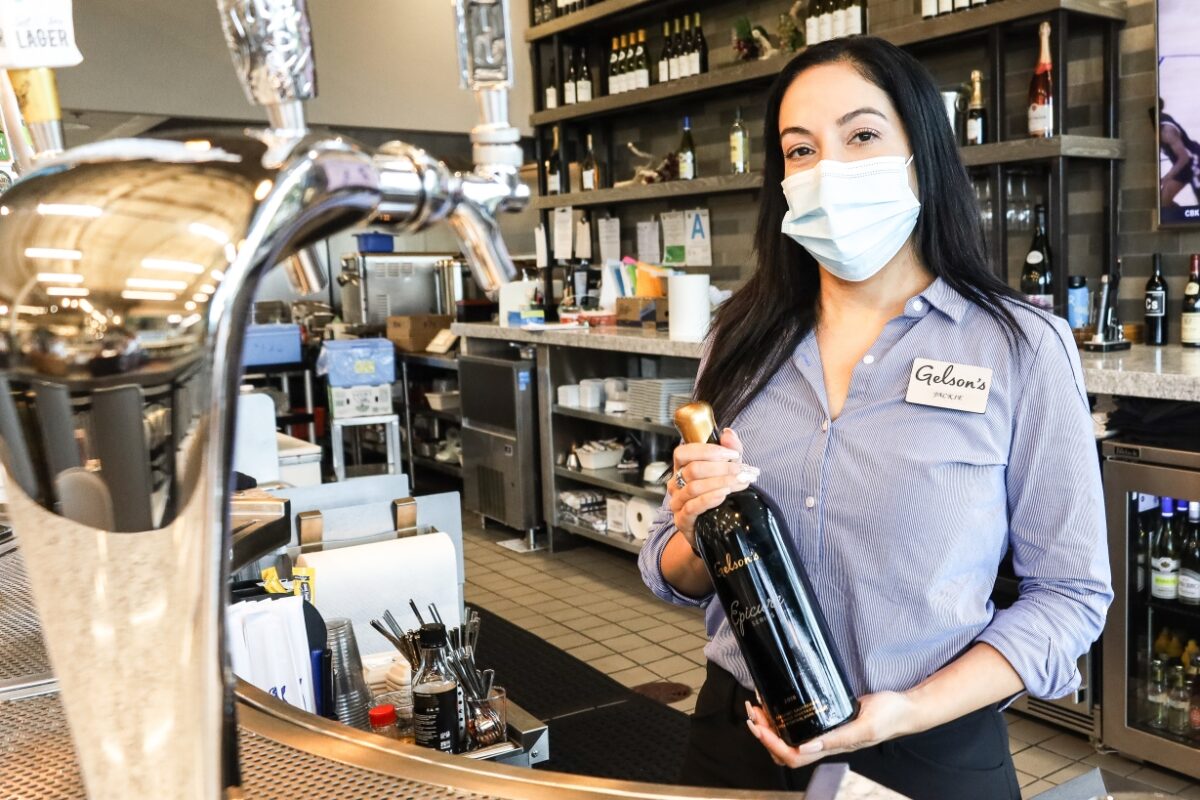 I am old enough to remember the pre-internet age, and still marvel at some of the changes. If you wanted to know when a restaurant was open you had to call and ask, and if you were curious about what they served you had to hope the person on the other end of the phone was not too busy and could tell you. When going to a place you hadn’t visited before, you consulted your car’s pile of crumpled and misfolded maps, with any passengers assigned the role of navigator.

These days restaurants without websites are a curiosity. Are they anti-technology, or is this the equivalent of the speakeasies that have no sign because all the cool people already know about them? You might be able to find out by asking someone, but you’ll have to do it in person because the establishment has already established that communication isn’t one of their strong points.

This makes the wine and tapas bar at Gelson’s a particular oddity. It’s not hidden because it’s just inside the front door, and they’re not averse to technology because that store has a website with other particulars of their business. The people who work there don’t seem to know why there’s no online menu either, so it’s a mystery even to insiders.

You can study the paper menu from a notebook under the sign that reads ”Noshing & Imbibing” at the north end of the store. A dozen tall seats face the wine and beer selection and small sushi bar, a similar number in the opposite direction, and there are a few tables outside on the small patio. On two visits the ones facing the bar were most popular, and regulars watched sports and conversed over their meals. The selection of food, wine, and beer is eclectic and strong on Mediterranean tapas and sushi, rounded out with a few American favorites. 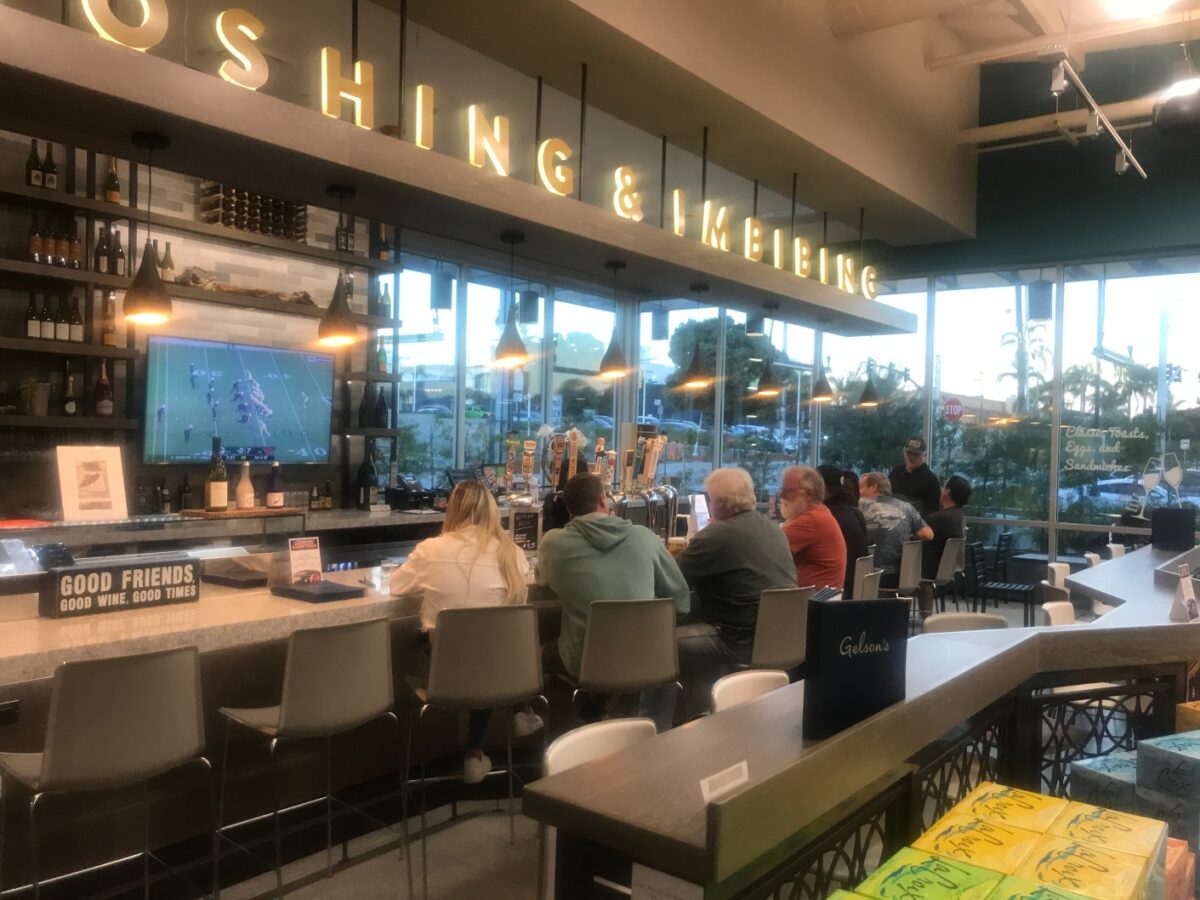 Outdoor and indoor table seats are available, but the bar seats are the most popular. Photo by Richard Foss

On a recent evening we decided to order items from the whole range and got a cup of clam chowder, a royal rainbow roll, seared ahi bites, impossible burger sliders, and mac and cheese topped with brisket. That sounds like a ridiculous amount of food for two people, but these are tapas sized portions and we had only over-ordered a bit. We also ordered glasses of Pouilly-Fusse and Gelson’s house label Chardonay and received generous pours of quality wine. I’d have that house chard again, as it had a mild oakiness and went quite well with the chowder. That soup was very buttery and had finely chopped shellfish and potato with no celery and very little herb or pepper flavor. I prefer a little more herbal flavor, but if you like your chowder rich and simple this may your cup of soup.

The next items to arrive was the “royal rainbow” sushi roll, made of an assortment of fish with blue crab, cucumber, and masago. The alternating slices of roll were topped with bits of lemon and halved black olives, and some bits of cilantro added more color than flavor. Also on the plate was far too much ginger, and the good quality ginger at that. We felt bad about wasting it but weren’t going to just sit around eating ginger. It was in balance just as it was, which is more than I could say for the seared poke over cucumber slices topped with avocado and masago. This was served over drizzles of three sauces, wasabi oil, spicy mayo, and walnut cream, with crisped garlic sprinkled on top. The fish had been heavily dusted with spicy togarashi seasoning, and along with the three sauces there were so many things going on that it was a muddle of flavors. I liked the idea of walnut cream sauce with sushi, but it was so overwhelmed by everything else that it was just a pretty stripe on the plate. This might be a winner with the sauces on the side, but didn’t work as delivered. 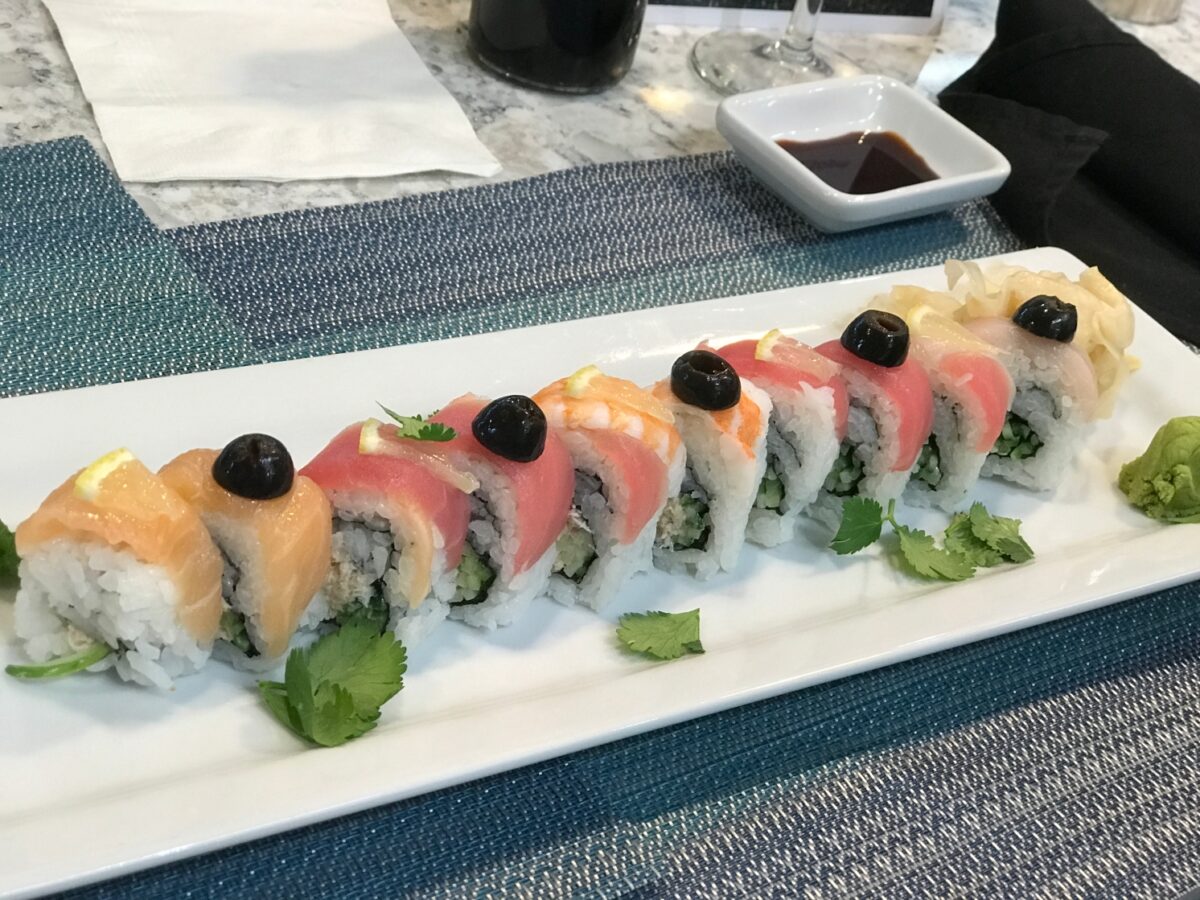 Gelson’s royal rainbow roll gets its name from the colors in the variety of fish on top. Inside in blue crab and cucumber. Photo by Richard Foss

The final items of this meal were the impossible burger sliders, which were good little burgers just as they’re supposed to be, served with a cole slaw that emphasized the vegetable flavors and wasn’t heavily creamy. I liked the brisket-topped mac and cheese too, though the pasta was a bit past al dente and in a sauce that would have needed some pepper if served by itself. Luckily the brisket was in a sauce that had a little vinegar and a light touch of chili that completed the flavors nicely. I didn’t taste much smoke flavor in the brisket, but it worked very well as a component of this dish. It also paired nicely with a glass of Daou “The Pessimist” that I had optimistically ordered.

We asked about dessert and were directed to the bakery at the other side of the store, but our inquiry was more from curiosity than real desire for a sweet. It had been a relaxing meal of nibbles for about $85, but there was one more item I wanted to try. I came back the next day for a burger, advertised at a mere eleven bucks with housemade chips. I can verify that this was a real deal, high quality meat on a fresh bun with plenty of good cheese and vegetables. It was a bit of a mess due to the moist meat and sauce, but a few spots on a shirt are a small price to pay. This may be the best deal at Gelson’s, and is a good reason to stop in.

It’s a mystery to me why the store hasn’t promoted their tapas bar since they’ve put some effort into making it very good. I’ll be back, and not just for that burger, because I’m always up for a varied meal with style.