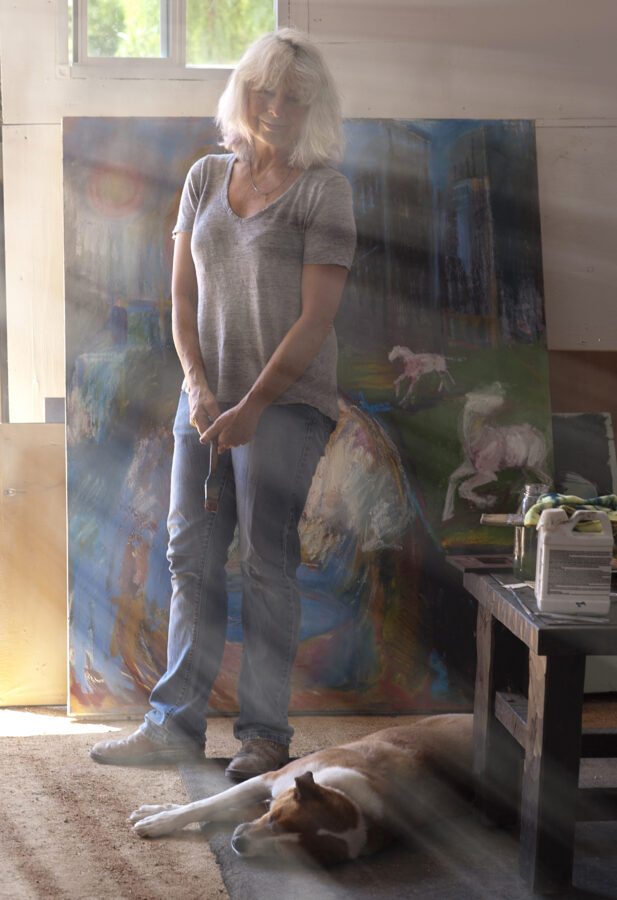 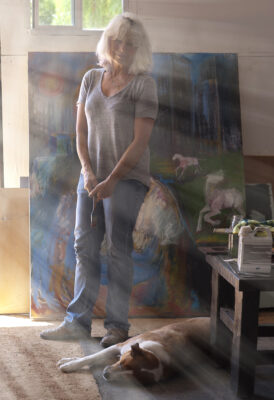 If we’re looking for precise answers and definitions of art, we’d better not ask Peggy Zask. Her replies, however, reveal that she’s still searching, and if art isn’t about encounter and exploration, what is?

“I tend to have different artist statements every week,” she says, “because art is something that you just do. It comes out of whatever state you’re in. But when asked to explain it, I come up with different explanations at different times, and I don’t know what the truth is. That’s what I’m trying to seek. I think that’s the whole reason we make art.”

“The art,” she continues, “is in how you say, how you feel, and what you look at in the world or your culture, how you respond to it, and what you want to focus on.”

Zask, a Portuguese Bend resident,  taught art and ceramics at Mira Costa High School for many years, has operated a number of art galleries up and down the Palos Verdes peninsula, and currently runs Zask Gallery, situated at the Loft in San Pedro, while heading up the non-profit art organization South Bay Contemporary. She’s featured hundreds of artists, and now she herself is the subject of a solo show opening Saturday evening at Gallery H in Hawthorne.

Going on the attack

The art that Peggy Zask creates has to fight for its survival, and it usually doesn’t emerge unscathed.

“I believe that my work is conceptual,” she begins. “In other words, I’m not putting up paintings on the wall where you can stand back and go, ‘Oh, that’s so masterful! She really knows how to catch the likeness of that mustang running in the wind.’

“I feel strongly about reusing and reworking my artwork that I never felt was resolved, because I have this thing where I’m never satisfied with what I do. Like with this show, I’m not ready; I’m never ready. Every day I go in [to the studio] and attack it, and transform it. So the title ‘Transformations’ is good because that really is what happens.”

“I will build something up, and then I’ll deconstruct it,” Zask says. “Then I’ll come back and repair it. While all this is happening I’m thinking about the world that’s kind of breaking down, and what can we do. The idea is not to build it into something grand again, the idea is to heal.”

Before it can heal, it’s got to be broken up or beaten down, right? 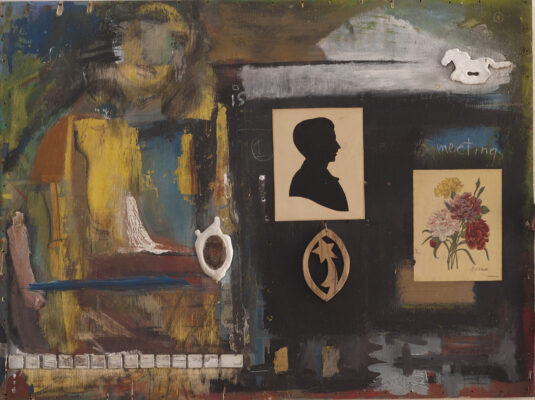 “Are You really?” by Peggy Zask

“I’ll build something up,” Zask says, “and as soon as it starts to look too processed I will destroy it–either that or I’ll start putting found objects on top (of the work).

“I wouldn’t call it an assemblage,” she says of the result, but she is adding to it–wood slats on the back of the canvas so that it can support whatever’s at hand that she wants to attach and incorporate into/onto the art object. Sometimes the canvas will be deliberately ripped and resewn.

“A while back I did this series of what we call ‘gesture vessels,’ where I made these big ceramic pots.” After taking them off the potter’s wheel, but before they dried, Zask says, “a gesture was made, like with a stick; or an object was thrust into it. And so they’ve got these impact marks without damaging the integrity of the pots.”

This approach or concept, the artist says, “is part of the same aesthetic as ‘stuff happens’ in life, and there’s a lot of violence that goes on around you. I’m not an abused person, and I don’t feel like I come from that, but I recognize it, and I feel ‘abuse’ just listening to what’s going on and wondering about equality.”

Perhaps this is known as art with a social conscience. But if there’s dissatisfaction and rage involved, it’s not all directed at the outside world. On occasion it’s directed at the inner self, at one’s own expectations or sense of falling short.

“Sometimes when I’m working on a piece,” Zask says, “and when I start a piece I never know what the image is going to look like, this frustration will [materialize] as I’m working on it, because I’m trying to get it to balance and to respond and to have that aesthetic I’m looking for, and [to have it] speak to me, to be interesting, and to make someone think and feel when they see it, whether it’s abstract or not, whether they can read anything into it or not.

“A good piece of art is going to strike you, and even if it was a million different things before and it gets all covered up, the person who looks at it–if it was all done with integrity on the artist’s part–I believe that that presence will be in the work no matter what it ends up looking like.

“So, it’s got that history,” she continues. “But sometimes I’ll get frustrated that it’s not going where I want it to go, and I’ll get really, really enraged and I’ll attack it.” In what way? “It could be like I’ll get a giant paintbrush and do a stick gesture on it. It might be a drill and I’ll drill a bunch of holes in it; it could be a razor blade, and I’ll slit it. I haven’t started breaking the canvases in half yet,” she laughs, “but that’s next probably. I’m kind of a sculptor at heart, by nature, and I get really physical about things, so I will treat the canvas in a very sculptural manner.”

There you have it, a side of Peggy Zask the artist that people may not have imagined was there. 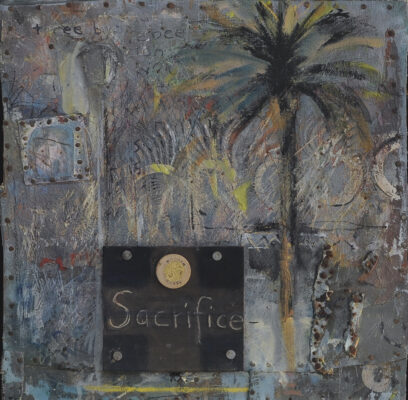 Painted or sculpted, Zask has had a longstanding interest in horses.

“I was doing the horses for quite a while,” she says, “and I’ve also been trying to transform the horses into people, trying to figure out how they connect to who I am and why they keep showing up.

Ceramic horses, like people, don’t always emerge in one piece.

“When I was doing a lot of horses in ceramics I had a lot of them that were broken,” Zask says, “like their legs would break or they’d warp and they wouldn’t stand. And so I did a series where I cast a bunch of them in cement.” The result is an odd-looking multitude of horses, “and they’re sticking out of this one piece.”

Peggy Zask has lately been thinking about the future of art. At this point in time, as she says, we’re deep into the digital age, and while the traditional art forms aren’t likely to go away, it’s quite possible they’ll be minimized and marginalized. Canvas and tubes of oil paint? Oh, please! 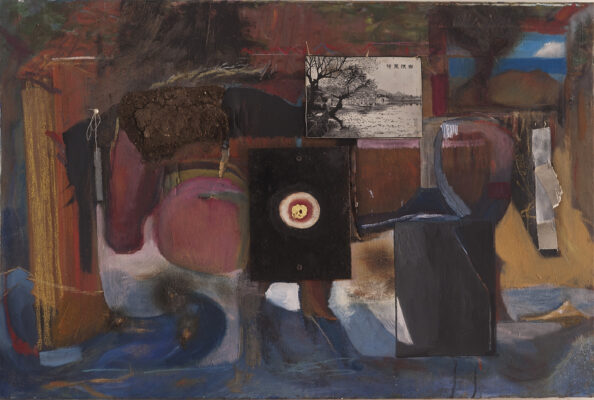 “When I go out into the studio and I look at that setup,” Zask says, “I feel like a dinosaur. What I’m saying about canvas painting is that I’m not going out and buying any new canvases, and I don’t buy new paint. What I’m doing right now is finishing what I had started, using all the paints that I have. And once I finish the show I really don’t know what I’m going to do.”

An informed guess would tell us that Zask, like her husband, Ben, is likely to gravitate even more into found art or assemblage art.

“I see this proliferating,” she says, referring to art that uses and emerges from the found object. “It’s been around, but I see it becoming more and more profound, too, where there’s a sustainable art movement right now that is kind of connected with the whole grassroots political ideology. It’s not just art anymore… It is kind of a reaction to the corporate art world structure. I see my work as part of that (reaction) also.”

One may think of artists like Joseph Cornell and Robert Rauschenberg or, locally, Annemarie Rawlinson or Ron Pippen, people who have used non-traditional materials to create new objects of stunning beauty. Is Peggy Zask headed into their august company? We’ll have to check back in five years.

In the meantime, her solo show contains work from the previous eight or ten years, and there is quite a variety. “So it’ll be a bit of a retrospective,” she says, “but with an emphasis on the newer reworking, the newer transformations.”

“Transformations,” highlighting art by Peggy Sivert Zask, is curated by gallery director Gloria Plascencia, and it opens Saturday with a reception from 6 to 9 p.m. at Gallery H, 12619 Hawthorne Blvd., Hawthorne. A performance piece, electronic music themed to the artwork, is being performed by Patrick Healy at 7 p.m. Through Sept. 26. Call the curator/director at (310) 869-4992 or go to phantomgalleriesla.com.