A genteel and delicious experience at Il Fornaio [restaurant review] 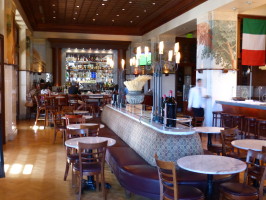 The dining room at Il Fornaio is palatial, but the service is personal. Photo .

It can be fun to watch movies from the 1930’s and 1940’s and observe the style and pomp of restaurants of that era – the tuxedoed waiters, ceremonial presentation of dishes, and preparation of everything from salads to flaming desserts at tableside carts. It’s the way big nights out used to be before the seismic cultural shifts of the 1960’s. Everything in our lives is more casual now, but some of us get the urge to enjoy that more elegant world every once in a while.

You can count the restaurants in the South Bay that have this sort of service on one hand, and one of them is located not in any of the downtowns, but in a strip mall on Rosecrans. Whoever designed this Il Fornaio location spared no expense on grandeur – the imposing exterior is softened by foliage but still resembles a grand mansion, an impression also conveyed by the vast high-ceilinged space with a baronial fireplace in the corner. It would be intimidating if there weren’t gorgeous arrays of flowers at all sides, an open kitchen with leaping flames in an oven, and rows of fresh-baked loaves in racks near the door.

Those loaves are a reminder that Il Fornaio means “The Baker,” and the promise of fresh Italian breads and pastries is enough to bring even devotedly casual diners in to see what’s going on here. Though it’s a chain, the original restaurant was an outgrowth of a baking school in Italy, and bakers from their American operation have won international awards. There is evidently a determination to maintain European traditions of both food and service, as demonstrated by the white-jacketed host who greeted us on our first visit and showed us to our table with a slight bow.

After offering water (sparkling or still, naturally) and a few minutes with our menus, a basket of bread showed up, distracting me completely. It was nicely varied – rustic olive and wholegrain rolls and a crusty Italian loaf, served with the usual olive oil with a swirl of Balsamic vinegar.

My wife and I were out for dinner at the end of a stressful day and decided to start with an old favorite – a Caesar salad. Our server didn’t actually prepare the dressing at tableside, as is occasionally done, but did wheel the salad over on a cart to toss, distribute croutons, and portion precisely on two plates in an artistic manner. It was the classic Caesar in all its elegant simplicity, the dressing rich with cheese, egg, garlic, and just enough sharpness from anchovy and pepper to keep things lively.

We had decided to dine in classic style, so split a pizza as a second starter before our main course, roast duck with berry sauce. As the place was named after their bake oven, we wanted to try items that issued from it, though I’ll admit that we were tempted by some intriguing homemade pastas. We opted for a vegetarian ”Capricciosa” pizza with artichoke heart, mushroom, olives, and eggplant, and it arrived on a pie with a modest amount of cheese and sauce on a light, crisp crust. The less-than-abundant saucing is entirely appropriate because this is how they’re made in Italy – pizza there is usually an appetizer rather than a meal, so that bread crust isn’t loaded with toppings. This makes it less filling, and what looked like a gigantic meal was merely a large one – we could have finished that pizza between the two of us, but a platter of duck was coming hot from the rotisserie so we set some aside.

It was a full half bird, topped with a sauce made from duck stock, raspberries, and blueberries with fresh berries for garnish. Rotisserie cooking had rendered out much of the fat and left a slightly crisp skin and very tender meat. Along with the mashed potatoes, green beans, and carrots that flanked it, this made for a substantial meal; my wife and I are hearty eaters, and we could have invited another hungry person to our table without needing to order more.

Of course we paired our meal with drinks – the wine list here has a wide variety of Italian wines, and our sever Francisco showed uncommon knowledge in his descriptions and pairing suggestions. When he wheeled the fully laden dessert cart over – the third wheeled vehicle of our meal, since he had also cut our pizza tableside – he described the available items so well that we wavered in our decision to skip dessert. After eyeing freshly made cannoli, beautifully presented cakes and panna cotta, and other delights, we promised ourselves that we’d return soon and sample sweets then.

Our next visit was only a few days later, when we decided to stop in for weekend brunch. The menu strays far from Italian specialties; you can get pancakes with real maple syrup, French toast, omelets, or other traditional American fare, but we decided to start with a Southern Italian specialty – polenta with gorgonzola from their “piccolo ordini” menu. Piccolo ordini means little bites, and that’s entirely accurate, as we each had two modest forkfuls. The soft polenta with a dab of cheese was a modest little starter, tasty but out of character for the restaurant; polenta is a traditional breakfast item in Southern Italy, and it’s therefore odd that there’s no brunch entree on the menu that showcases regional recipes.

There were no quarrels about quantity with our main courses – an Italian-style eggs benedict with sautéed spinach and crabcakes with a lobster-cream sauce in lieu of hollandaise, and a breakfast calzone. The calzone was a breakfast burrito gone Italian, with the usual eggs, onions, and potatoes along with mozzarella cheese and luganega sausage. The luganega sausage was less peppery than typical breakfast sausage but had some pleasant herbal flavors, and it was a good idea. The portion was so huge that   I can’t imagine anybody eating a whole one – I was hungry when I arrived and only managed half.

The calzone was good, the eggs better – filone bread is a better base for eggs benedict, soft but capable of soaking up a lot of sauce without getting soggy, and the seafood and perfectly poached egg were marvelous with the lobster sauce. Along with home fries with caramelized onions and some fruit, it was a balanced and beautiful meal.

The only thing wrong on our second visit was the service – our waiter hadn’t warned us that it would take forty minutes to make and bake the calzone. Despite the fact that the restaurant was only about a quarter full, he made very few visits to our table during that whole time so we ran out of coffee and water. He seemed to have good knowledge of the menu and Italian food in general, but did not give the attentive service that we experienced on our other visit.

Our dinner was $107 with four glasses of wine, lunch was $39 with coffees – despite the service problems at the latter, we counted both visits time and money well spent. The food on both occasions was very authentic and flavorful, and when the service is as attentive as it was on our first visit, it’s a genteel and delightful experience.