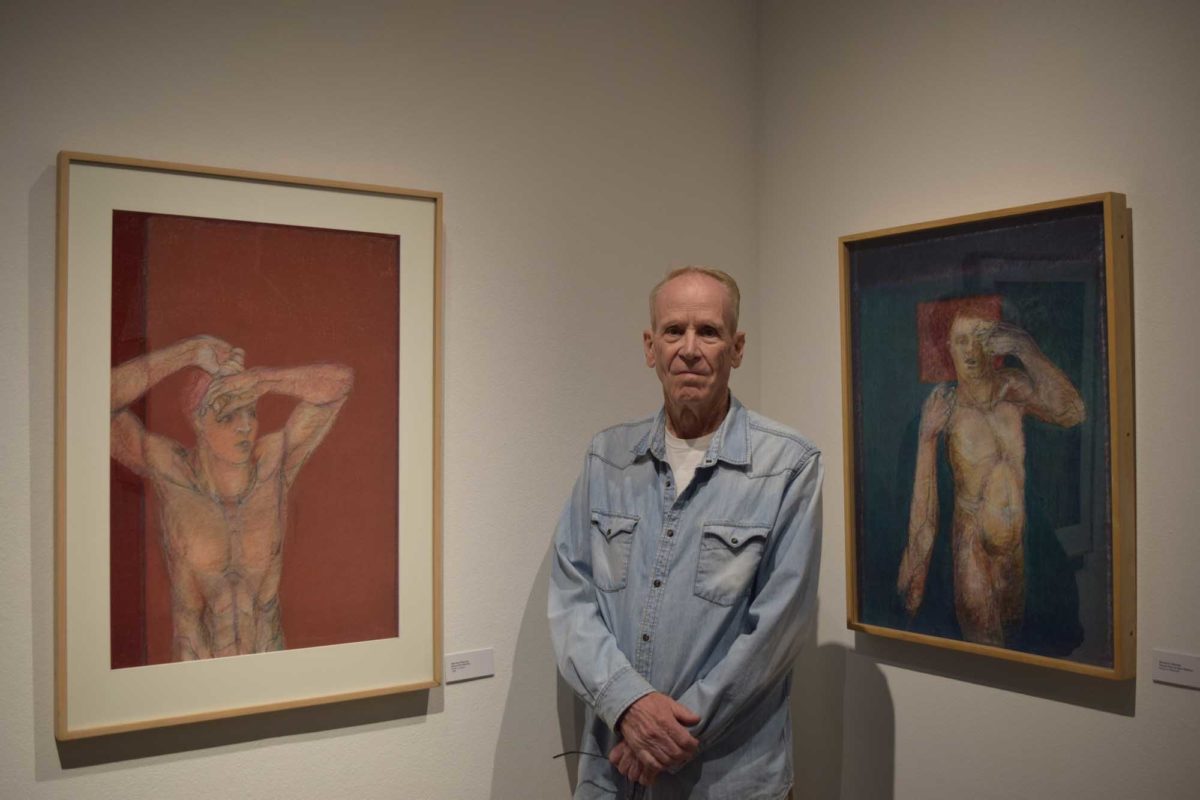 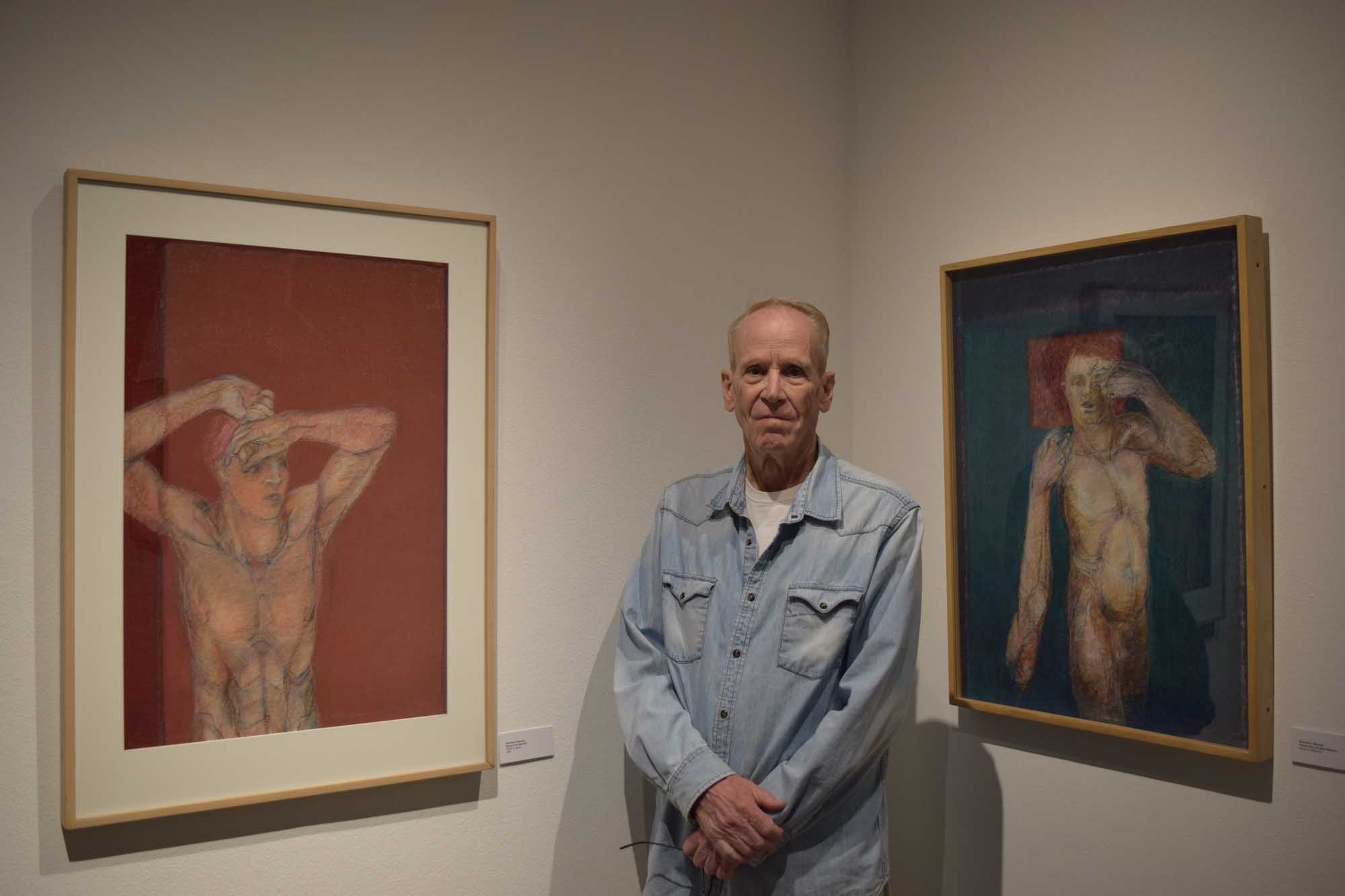 “Johns Canyon” is a survey of work by artist Harrison Storms

For over 30 years, Harrison Storms taught life-drawing classes at El Camino. He instructed his students from an academic and historical point of view, emphasizing (his words here) “anatomy and proportion and form and gesture in a traditional way.” If they could master this, his students would possess the basic skills from which to pursue other aspects of making art. In short, knowing the rules before venturing out and breaking them.

While Storms himself continues to enjoy traditional figurative drawing, he has also spent many years experimenting with the human figure, essentially creating, obliterating, and resurrecting or reconstructing it, and often repeating this process several times within the same composition. This may sound confusing without an illustrative example, but as Storms begins to explain what he’s doing, and why, it all falls into place and should both impress and astonish the viewer. 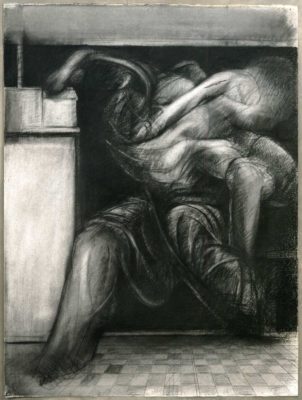 These specific works, which fall under the collective title of “Johns Canyon,” eventually all but dissolve the initial figure. And yet virtually all of them “somehow or other hold onto the figure, and it’s somehow there in the work.”

“It very definitely is,” adds curator Susanna Meiers, who selected and arranged “Johns Canyon” for the El Camino College Art Gallery, where the work is on view, with a reception this coming Wednesday, Sept. 4.

“Whether it’s completely absent or not,” Meiers continues, “the presence is still felt… and it’s felt almost like the spirit of the figure rather than as the body of the figure.”

But it all begins with an anatomical grid.

“I had a reproduction from an anatomy book of the (human) skeleton,” Storms says. “One of the first things that artists do is work out proportional relationships between the head, the pelvis, the rib cage, and that helps them draw.

“Well, I took that idea, I took a skeleton, and I put in horizontal and vertical lines that represented the top of the head to the bottom of the chin, to the pit of the neck, and on down.”

My understanding is that this grid, or schema, to represent the proportions of the human figure, consists of 14 horizontal and 13 vertical lines. 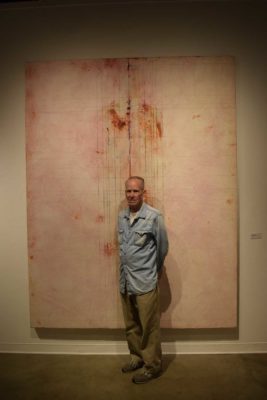 With the grid as his guide, Storms would then paint the figure. I’m not sure how detailed that figure is initially, but soon thereafter the panel is lowered and laid flat on the floor. At which point, the artist says, “I would grind away the panel and the image of the figure. But the grid would still be there.”

At best, the figure is a ghostly image, but the reference to the body remains, even if it’s now little more than a resonance.

“It still represents those traditional ideas about proportion,” Storms says.

But what induced or inspired him to pursue and continue this kind of art? What’s behind the motivation to keep exploring?

Conveying the force of the idea

“Johns Canyon” may seem like a misleading title for a show (in this case, properly speaking, a survey) of images devoted exclusively to the human body or parts thereof. However, Johns Canyon is a street in Rolling Hills, in an area remote and largely inaccessible to the general public. The homes that are there now are large and sprawling. When Storms lived there with his family in the 1950s “it was this magical space with lots of open land.

“To a great extent, that’s what the work is about,” he says. “It’s about that experience of growing up there. And even though I call this work ‘Johns Canyon,’ I’m not drawing a canyon literally; I’m drawing the experience of being there.”

Anyone residing on the Palos Verdes Peninsula prior to 1965 should recall that vast areas of it had not yet been developed. When Storms was about five years old his family lived up the hill from Walteria. Behind their house was an open field, stretching into the distance.

“It was a magical moment,” he says. “That magic moment is something I try to create in the work.

“I had similar kinds of experiences up in Johns Canyon. So even though it’s not a canyon that I’m painting, it’s the experience through the representation of the figure that I’m trying to explore this idea.”

The figure in transition

When we enter the gallery there are two relatively colorful pastels (“Beyond the Wall #3” and “Premonition of St. Matthew”). To the right of them is a small room where chalk or charcoal figure drawings are displayed, the same kind of work Storms was probably trying to coax from his students.
In the main gallery, we approach large charcoal on paper drawings that are part of the series called “Beyond the Wall.”

“I’m a student of Michelangelo,” Storms says. “I love the way he lived his life, his work, and this enormous talent that he had.” The drawings in front of us were directly inspired by images of prophets on the ceiling of the Sistine Chapel. “They’re just sitting there and they’re twisting, the arms are in the air and their heads are like this. The idea is that it’s kind of moving and evolving into something.”

Storms pauses. “Once again, using the figure as a way to express an idea, and the idea eventually came out to be what we call ‘Johns Canyon.’ But it’s the figure in transition.”

It helps if the viewer knows this before setting foot into the gallery.

“Whatever part of the show you might be looking at, you got to keep in mind that it’s about transition evolving from one state to another state.” 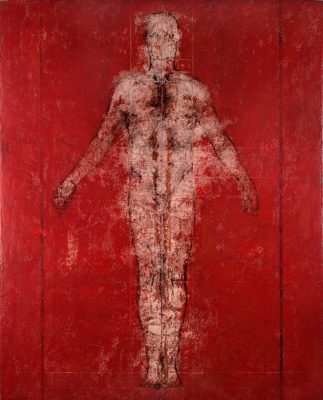 Most impressive of all are the large panels (about nine feet tall and six feet wide) that look like marble slabs, like the heavy lids that might seal a royal sarcophagus. They are, however, hollow panels of masonite, bolted together. The masonite is coated with gesso and limestone sand so that it’s akin to stucco. As noted, the work is then placed flat on the floor so that Storms could begin smoothing it with power tools.

“And when it gets smooth enough, I etch in these lines, and these are the lines I was talking about. Then I resurface it and grind it all down again to get the surface going.”

Storms says the the large paintings weigh about 200 pounds. Meiers thinks that number’s on the low end, says it’s more like 300, and backs this up by revealing that it took four people to get the work mounted.

“They’re really like a piece of sculpture,” Storm says. “It very definitely connects to my interest in fresco painting, which is what the Sistine ceiling was.” We silently contemplate the imposing work for a moment and then Storm continues. “What I do is I paint a figure, I do a whole figure here, and then I put it down on the floor and grind it all off. Then I hoist it back up and do it again. And grind it, and put it down and grind it all off, because I’m trying to find the place where it transforms itself.”

This bears some repeating: “…because I’m trying to find the place where it transforms itself.”

One of the goals, as such, while Storms is immersed in this labor-intensive work, is to eliminate the expectation that something might happen, so “where you’re not planning it” and thus may encourage, or leave open a portal, for the unexpected, which I see as another “magical moment” which, if it emerges, does so of its own accord. If all this comes across as slightly Zen-like, so be it. Although Storms himself is somewhat of a lapsed Catholic, the residue of what he was steeped in and absorbed (he attended Bishop Montgomery High School) continues to linger.

One of the places where it may seem to linger most visibly for the viewer is in his “Body #003,” one of the large masonite slabs that could pass as a combination of Leonardo da Vinci’s “Vitruvian Man” and a crucified Jesus Christ, flattened on an asphalt highway by an errant steamroller. The color red saturates the work.

Meiers puts the question to him: “What is it about the color red?”

“In this one,” Storms replies, “I think it has something to do with blood and sacrifice and crucifixion and all of that… There’s something, at least from my point of view, that is kind of religious about the work.”

Call it religious, call it spiritual, these works in “Johns Canyon” take us beyond the physical, corporeal body and into a Self that is comprised of memories, thoughts, dreams, fantasies, whatever it is that has made us and continues to make us what we are, and which adamantly is no less real and powerful for being intangible. We often talk about art as process, but here, for Storms, and now by association for us as well, it’s a profound search and a transcendent inner journey.

Johns Canyon: A survey of work by Harrison Storms is on view through Sept. 19 in the El Camino College Art Gallery, 16007 Crenshaw Blvd, Torrance. The artist reception is Wednesday, Sept. 4, from 5 to 8 p.m., with an artist’s talk and walkthrough with Storms and art historian Karen Whitney at 1 p.m. on Tuesday, Sept. 10. Gallery hours are Monday and Tuesday from 8 a.m. to 3 p.m., and Wednesday and Thursday from 12 to 7:30 p.m. Call (310) 660-3010 or visit elcamino.edu and scroll to Art Gallery. ER