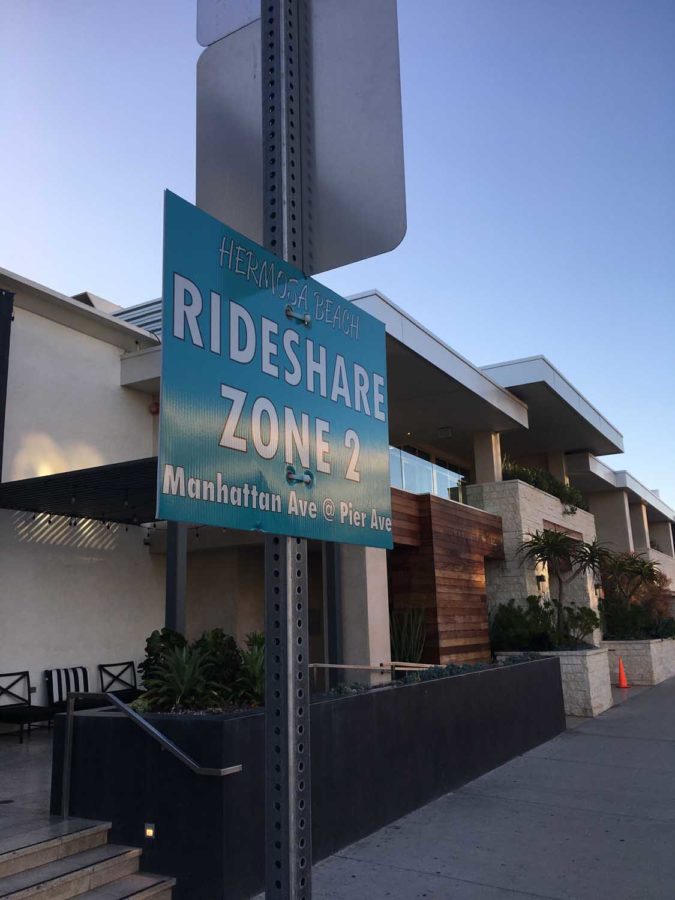 One of the test ride-hail pickup locations in downtown Hermosa. Photo by Ryan McDonald

Next time you’re looking to summon an Uber or Lyft in downtown Hermosa Beach, the screen on your phone might look a little different.

“Rather than saying ‘Pick me up exactly where I am,’ which as we know can be problematic if someone is standing in the middle of Pier Plaza, it will shift them toward selecting one of those locations, and the driver will be directed to the location,” City Environmental Analyst Leeanne Singleton told the council.

The move establishes a downtown area that will be “geofenced” in the companies’ proprietary apps. Someone requesting a ride within the given location during impacted hours — between 9 p.m. and 3 a.m., Thursday through Sunday — will be directed to choose from locations along Hermosa Avenue in front of Parking Lot A, the Comedy & Magic Club, Hermosa Beach Brewing Co., or the existing taxi zone in front of Bank of America. (The taxi zone will be relocated to the north side of Pier Avenue.) The geofenced area includes all of Pier Plaza and the three downtown parking lots; from Hermosa Avenue east to Palm Drive between 14th Street and Pier Avenue; and along Hermosa Avenue from Pier south to 10th Street.

Hermosa, which along with Manhattan Beach is among Uber’s seven most popular destinations in Los Angeles County, is the first city in the South Bay to create these rules, but others may soon follow. The decision comes as the growing popularity of companies like Uber and Lyft has upended several industries, most notably taxis. Cities across California are updating the way they regulate taxis, while also trying to address some of the unexpected side effects of the popularity of ride-hailing.

In 2017, the California Legislature passed AB 1039, which took effect Jan. 1 and prohibits cities from imposing permit agreements on taxis unless the taxi company is “substantially located” within its jurisdiction. Assemblyman Evan Low, the bill’s author, said that traditional cab companies were at a “severe competitive disadvantage” because of a tighter regulatory environment than the one faced by ride-hailing companies. Under existing law, Uber, Lyft and companies offering exclusively booked rides are considered “transportation network companies,” and are regulated by the California Public Utilities Commission. Taxi cabs, which can be hailed by people on the street, are regulated at the local level. In Los Angeles County, which has 88 city governments, this has meant that cab companies face a “patchwork of regulations,” according to the state Legislative Analyst’s Office.

AB 1039 put an end to the franchise agreement that Hermosa has had with taxi operators for the past 15 years. Under that agreement, the most recent version of which the council approved in June 2017, taxis received an exclusive right to operate in the city for a fee of $610 per cab per year.

That agreement already represented a steep discount from past deals that had charged as much as $1,100 per cab. Cab companies sought out the cheaper rate because the popularity of ride-hailing had significantly cut into their margins.

But while customers have been drawn to the app-based platforms because of lower price and ease of use, they have created occasional headaches for cities, including Hermosa. At times, pedestrians run into the street or cross at non-designated crossings, police have said. Drivers will circulate repeatedly through downtown, adding to traffic, or double park while waiting for passengers.

Of even more concern are drivers who, unfamiliar with the area, respond to a request for pick-up at a beachside home by driving onto prohibited areas — including some loaded with pedestrians.

“We do continue to observe [drivers] who make their way onto Strand or Pier Plaza if a gate is left open,” Singleton said. The program approved last week also makes it impossible for people to summon a vehicle to the beach or to The Strand walkway, as is now possible. Under an agreement with the companies, these will be considered “negative venues,” and customers ordering a ride from those locations will have their geolocated “pin” shifted elsewhere by the app.

City staff used the need for change created by AB 1039 as a chance to address these impacts as well. In August of last year, staff reached out to Uber and Lyft for a pilot program to establish fixed zones throughout the city at which to pick up passengers.

In something of a reversal, the companies agreed. At the time the council approved the 2017 taxi franchise agreement, Councilmember Hany Fangary said that meetings he had attended of the South Bay Cities Council of Governments convinced him that Uber and Lyft  were resistant local regulation.

“One of the things I got out of that is that Uber and Lyft are not willing to put any investment in infrastructure or pay any fees, whereas the cab companies obviously do,” Fangary said.

Under the new arrangement approved last week, the city is still responsible for installing and maintaining regulatory signs, and neither taxi companies nor ride-hailing companies will pay franchise fees. But Singleton said that, because the regulations may improve the flow of traffic and allow for greater turnover, the companies may contribute to “marketing efforts,” including temporary ground signage directing pedestrians to the zones, or maps printed on coasters stocked by local restaurants.

Police told staff that while the fixed locations during the trial run did not entirely cure the problems associated with ride-hailing, they have lead to improvements.