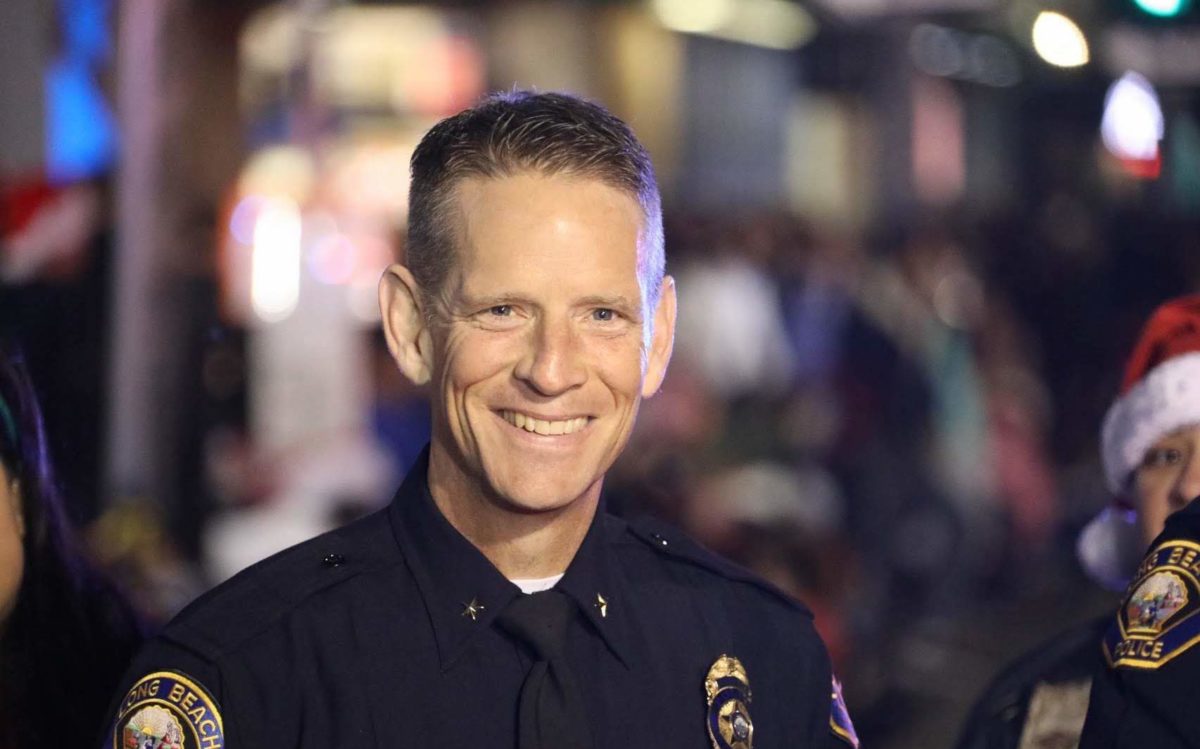 Commander Paul LeBaron of the Long Beach Police Department will become the next Chief of Police in Hermosa on April 16. Photo by Justin Rudd

Commander Paul LeBaron of the Long Beach Police Department will become the next Chief of Police in Hermosa on April 16. Photo by Justin Rudd

Paul LeBaron, who has spent nearly three decades with the Long Beach Police Department, will be the next chief of the Hermosa Beach Police Department, Hermosa officials announced Monday.
LeBaron replaces interim chief Mike McCrary, who took over in December after the retirement of acting Chief Milton McKinnon. LeBaron will be sworn in April 16, in a ceremony that will be shown on Facebook Live, in order to comply with orders from health officials to limit public gatherings amid the coronavirus pandemic.

LeBaron is transitioning from a department that serves a population some 25 times larger than Hermosa’s and has a proportionally greater number of sworn officers. In an interview, LeBaron said he saw the move to Hermosa as an opportunity to take on responsibilities that, in larger departments, are sometimes siloed.

“Long Beach is a big department. We can do so much with the resources we have. But I’ve also worked very closely with smaller departments throughout my career. And I’ve admired what the police officers and the leaders in those small departments have been able to do with fewer resources. And it’s something I was drawn to in the sense that I wanted to see how somebody could practice law enforcement and professionalism at that level, where you’re asked to wear multiple hats at the same time. I admire that,” he said.

Long Beach is one of the most diverse cities in the United States, with significant black, Latino and Southeast Asian populations. It has neighborhoods with deep socio-economic challenges and relatively high crime rates, as well as wealthy enclaves like Belmont Shore and Naples. In his time with the department, LeBaron worked out of each of the city’s geographic precincts. During a previous posting in east Long Beach, Lebaron oversaw a neighborhood that he said resembles Hermosa: “a small beach community with very good community involvement, a police department that knows the people that they work for, and there’s a great relationship there.”

“That was probably one of the times when I felt most comfortable in my career, when I felt that my talents were benefiting the city of Long Beach as well as the police department. So when Hermosa Beach became available, that was a natural fit for me,” he said.

LeBaron was selected after a months-long process that included a community forum and a national search led by the public service recruitment firm Bob Murray and Associates. According to a statement from Hermosa, 38 candidates applied for the position, fewer than the 47 that sought the job in the selection process that resulted in the selection of the city’s last permanent chief, Sharon Papa, in 2013. (Papa was out on medical leave for most of 2019, and officially retired in October, when McKinnon became acting chief before retiring himself in December). After receiving the applications, a four-person panel — consisting of McCrary, Chief Cynthia Renaud of the Santa Monica Police Department, Chief Keith Kaufmann of the Redondo Beach Police Department, and Manhattan Beach City Manager Bruce Moe — interviewed six finalists and recommended LeBaron. Hermosa Beach City Manager Suja Lowenthal then conducted her own interview and concurred.

LeBaron’s time in Long Beach had already put him in contact with Lowenthal, who served as a Long Beach City Councilmember before taking the job in Hermosa. LeBaron recalled that he helped Lowenthal with some issues in her council district. In a statement, Lowenthal said the city was “thrilled” to bring LeBaron to Hermosa.

“He is a strong leader with a commitment to excellence and accountability that will further strengthen the Hermosa Beach Police Department and its relationship with the community,” Lowenthal said.

LeBaron arrives at a Hermosa department coming off a tense labor dispute in which the city’s police officers and sergeants worked under an expired contract for more than six months. They had been seeking a raise in base salary, and launched a campaign that drew dozens of angry residents to City Council meetings to speak in support of the officers. A new contract inked in February provided for a boost of at least 19 percent over the next three years.

The deal also includes incentives designed to hire new officers and laterals, part of the city’s recruitment efforts for the department. A combination of injuries and officers leaving the department, some for better pay or the opportunity to work a more diverse range of assignments, has left the Hermosa department short of its full staffing level of 38 sworn officers.

Lebaron held a wide range of duties in Long Beach, including vice detective, supervisor in the Gang and Violent Crime Division, and sergeant in the Media Relations Detail. He currently serves as commander of the Port Police Division. He said the coronavirus, with the associated concerns over cruise ship passengers and an increase in truck traffic driven by a surge in e-commerce, has made him especially busy lately.

LeBaron was born and raised in Southern California. He grew up in Costa Mesa, and first began thinking about police work after going on a ride-along as part of a middle school field trip.

“I joke that my first interaction with the police was that time in the seventh grade, and all I remember is that I ate a donut and got to drive really fast,” he said.

LeBaron earned a bachelor’s degree at Cal State Long Beach, speaks Spanish, and is married with three children. He is an adjunct staff member at the Simon Wiesenthal Center Museum of Tolerance, where he teaches courses geared toward law enforcement officers, and has helped create curriculum on racial profiling and biased policing.