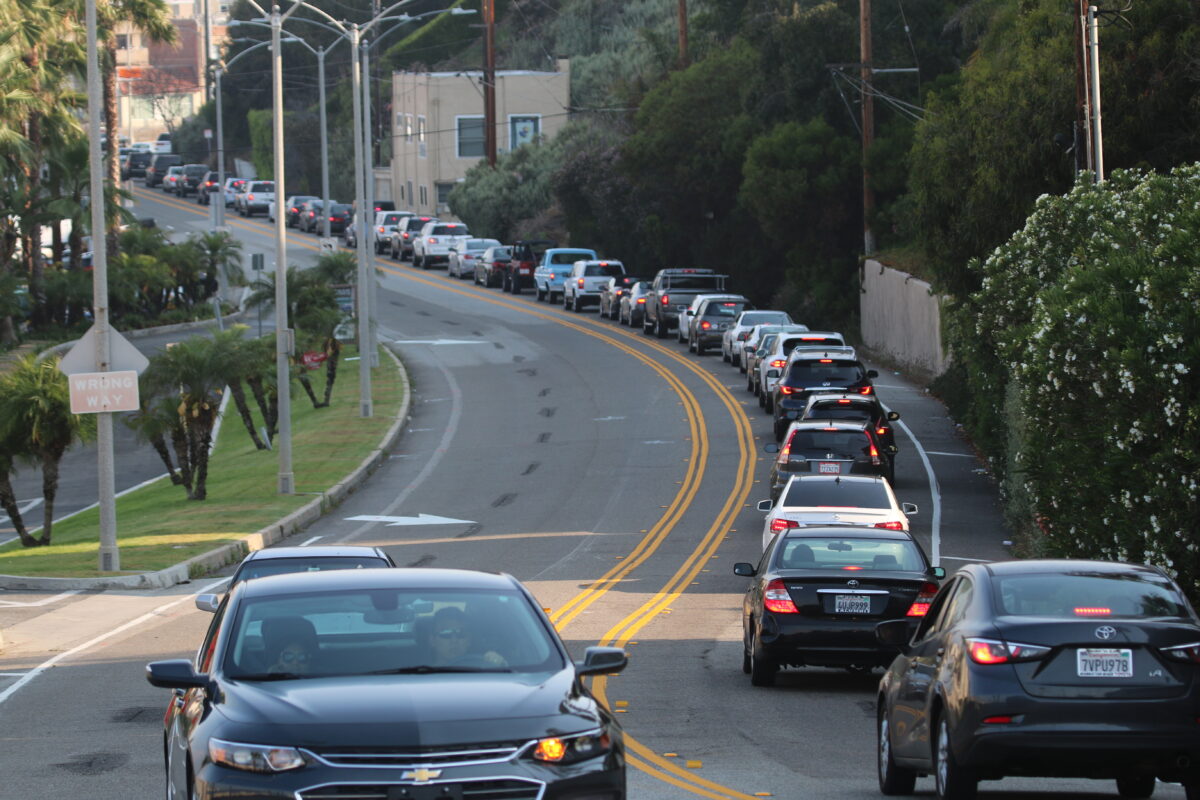 Relief from traffic jams like this may be in sight as crews begin removing the lane closures on Vista Del Mar. Photo 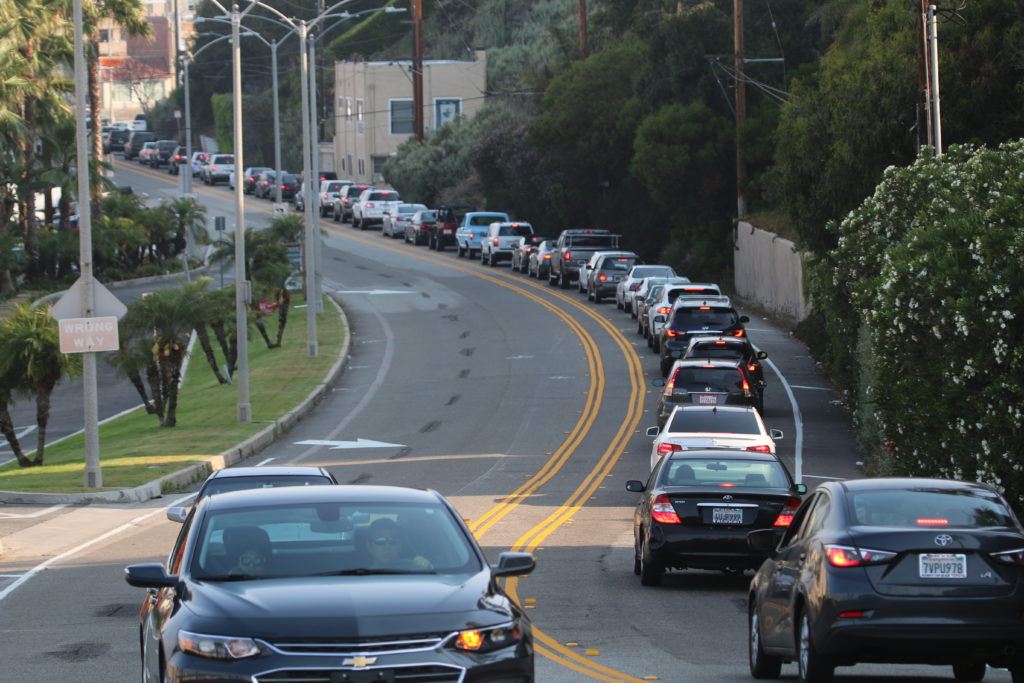 Amid mounting regional concern over impact on commute times for South Bay residents, Manhattan Beach has authorized a lawsuit against the City of Los Angeles over road reconfigurations in that city.

By a unanimous vote, the City Council last week directed City Attorney Quinn Barrow to initiate litigation should ongoing attempts at negotiation fail to resolve the city’s concerns. City officials have previously attempted to reach out to the Los Angeles Department of Transportation and Los Angeles City Councilmember Mike Bonin, in whose district the lane closures lie, complaining of a lack of involvement in the process.

Lawsuits stemming from municipal actions are typically measures of last resort, and courts require aggrieved parties to pursue other alternatives, such as negotiation or filing administrative appeals, before a case will be heard. But  part of the motivation for the threatened suit, Manhattan representatives said, has been an unwillingness to engage on the part of L.A. officials.

“We have received no response from Councilmember Bonin despite repeated efforts to reach out to him,” said Mayor David Lesser,  who on behalf of the city sent a letter to LADOT and Bonin’s office late last month.

Phone calls and emails by a reporter to Bonin’s office, as well as to the L.A. City Attorney’s office, were not returned.

Changes to the affected roads—Culver and Jefferson Boulevards, Pershing Drive and Vista del Mar—began in late May. Vista del Mar has drawn particular attention. The once four-lane road has been reduced to two lanes, one in each direction, north of the intersection with Imperial Highway. Some drivers estimate it has added 20 minutes or more to each leg of their daily commute.

The issue has generated immense concern among local residents. More than 700, almost all of them opposing the road reconfigurations, have been filed in a forum on the city’s web site. And a change.org petition formed in late May had, as of Wednesday morning, garnered more than 7,000 supporters. (The LADOT last week announced several changes to the plan, including opening an additional lane in one direction for a section of Culver, but these have largely failed to placate angry drivers.) 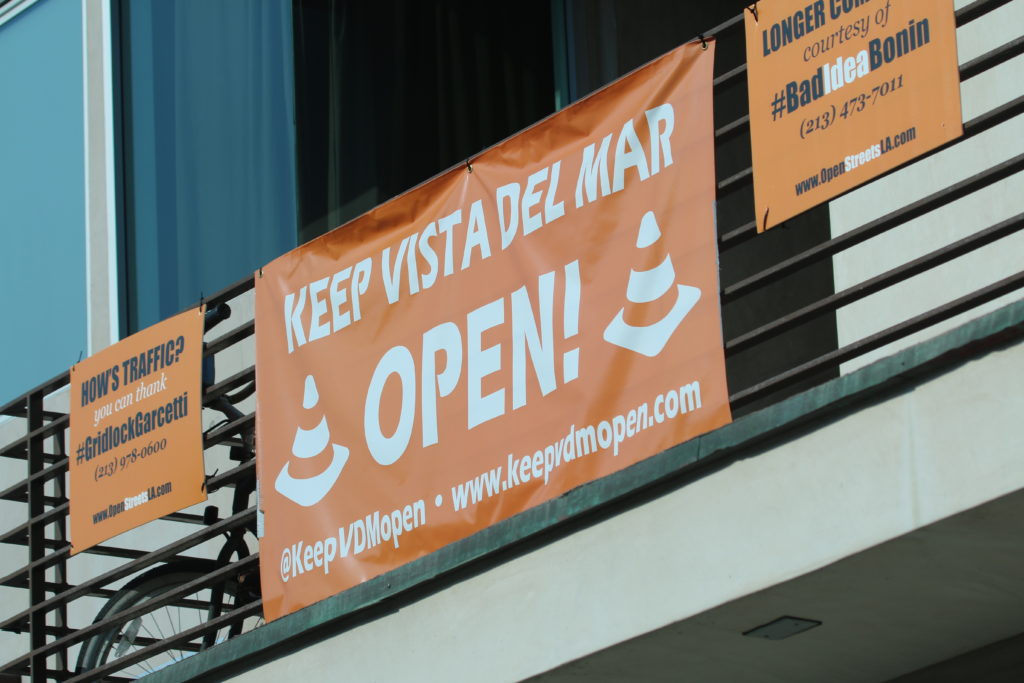 A home on Highland Avenue in Manhattan Beach displays opposition to the recent lane closures on Vista del Mar.

Manhattan is working with other affected cities to explore a unified response, and the issue has come up in committee meetings of the regional South Bay Cities Council of Governments. Officials have also expressed support for efforts by private citizens to address the issue.

The group’s appeal has been accepted, but a date for hearing it has not yet been set, Mendelson said. In the interim, they are gathering information, including speaking with dozens of Playa del Rey businesses they say have been negatively affected.

“This is a case of real overreach by government officials. Bonin is acting like a totalitarian ruler. It’s just not right,” Mendelson said.

The changes in Playa del Rey are part of a broader trend of reforms by the City of Los Angeles that have been in the works for years. These reforms are are intended to improve road safety, but also radically reconfigure long-established mobility patterns for Southern California.

Bonin began his “Safe Streets for Playa del Rey” initiative in spring 2015, which contained the genesis of many of the recently implemented changes. He hosted a series of community meetings with constituents, which his office has said featured significant resident concern about pass-through traffic in the area. Explosive growth of tech jobs in “Silicon Beach” over the last five years has sent thousands of new commuters into the area, many of them from the South Bay, and the growing popularity of traffic-mapping apps like Waze has diverted cars from arterials onto once-sleepy residential streets. 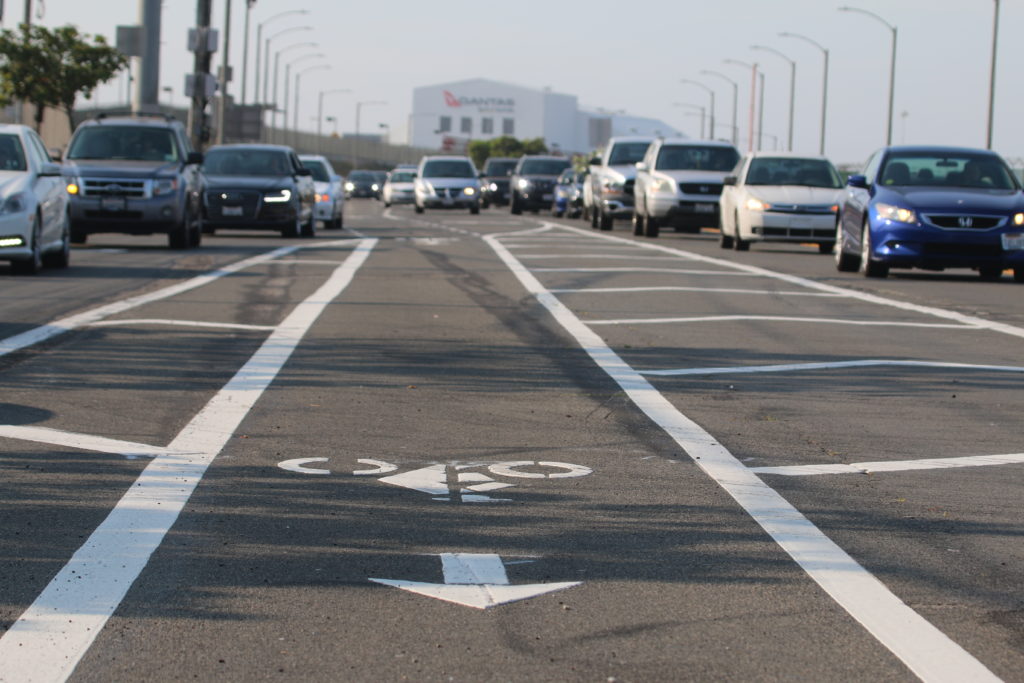 But Bonin’s plan, presented about a year before the road reconfigurations were implemented, did not include the changes to Vista del Mar, which were added far more recently at the advice of the L.A. City Attorney’s Office. On April 19 of this year, Los Angeles officials agreed to pay $9.5 million to settle a lawsuit from the parents of Naomi Larsen, a 16-year-old girl who two years ago was killed after being struck by a taxicab while attempting to cross Vista del Mar. Larsen’s parents claimed that their daughter’s death was a “foreseeable tragedy” because of inherent safety defects with Vista del Mar. It is not clear exactly when the Vista del Mar lane closures were decided on, but Bonin sent an email to constituents describing them, along with other aspects of the Safe Streets Initiative, on May 19.

Residents and city officials have pointed out that Larsen’s death took place around midnight, not during commuting hours, and argue that the May changes have reduced, rather than improved, road safety in the region. And Councilmember Richard Montgomery, who along with Lesser sits on a recently-formed city subcommittee devoted to the road reconfigurations, said that eliminating a lane represented an unnecessarily radical response.

The more aggressive direction, though, is arguably more compatible with the spirit of recent higher-level planning efforts in Los Angeles. The city has signed on to “Vision Zero,” a plan to eliminate traffic fatalities in the city through “traffic calming” measures, a pattern implemented with varying degrees of success in other parts of the city. (Larsen’s death was one of 14 that occurred on Vista del Mar between 2003 and 2015, a time period that also saw more than 250 serious-injury accidents.) And two years ago, the L.A. City Council, by a 12-2 vote, approved Mobility Plan 2035, a master planning document to implement bike lanes, “road diets,” and other measures throughout the city to encourage people to get out of their cars and onto bikes and public transit.

For better or worse, at least part of the effort is going as planned. Among about a dozen speakers at Hermosa Beach’s City Council meeting Tuesday night urging the city to join Manhattan’s efforts was a woman who complained of having just arrived from a one-hour, 42-minute commute from her job at UCLA; Metro Trip Planner, a feature on the transit agency’s website which plots routes using various regional public transit agencies, revealed comparable bus routes at the time taking less than one hour and 20 minutes.