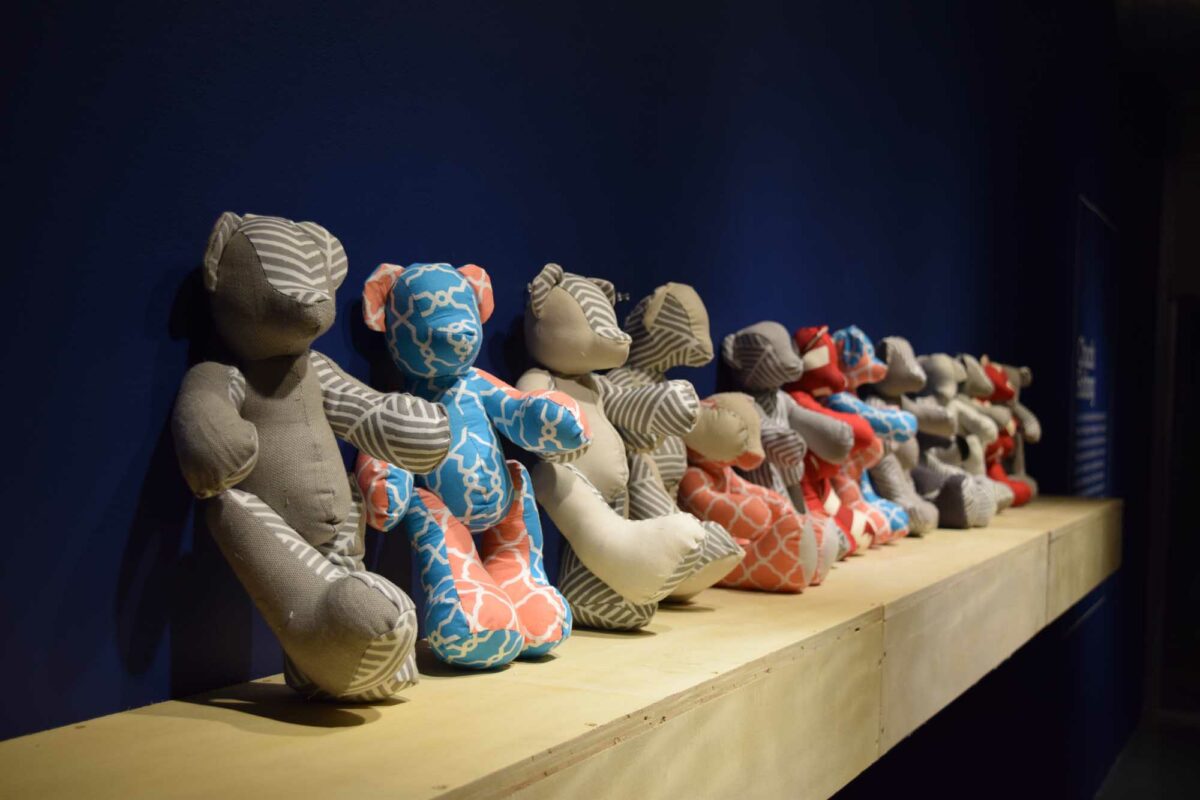 If you’d gone to the Manhattan Beach Art Center last weekend you might have learned a new word: Toyetic. It’s an entertainment term that refers to the suitability of an item or figure from a movie, cartoon, etc., for commercial marketing as a toy or souvenir. It’s also the name of the gallery’s new exhibition, which features three artists, two of whom were present at Friday’s opening reception.
“Toyetic” is not strictly about bears, but they do appear in the work of John T. Quinn III and Ross Bonfanti, and especially in the work of Chuck Hohng. So let’s start with Hohng.

Out of hibernation
As we step into the gallery there’s a small makeshift room to our immediate left that is serving as Hohng’s temporary studio. A bear’s den of a workshop, if you will. He’s all set up with a table, fabrics, a sewing machine, and shelfspace. He says he’ll be here regularly.
“It’s an extension of this exhibition,” he says, “but hopefully will grant me some time to develop something new.” Furthermore, it will give visitors an opportunity “to look at and to understand the process of what I’m doing as an artist-slash-artisan.” 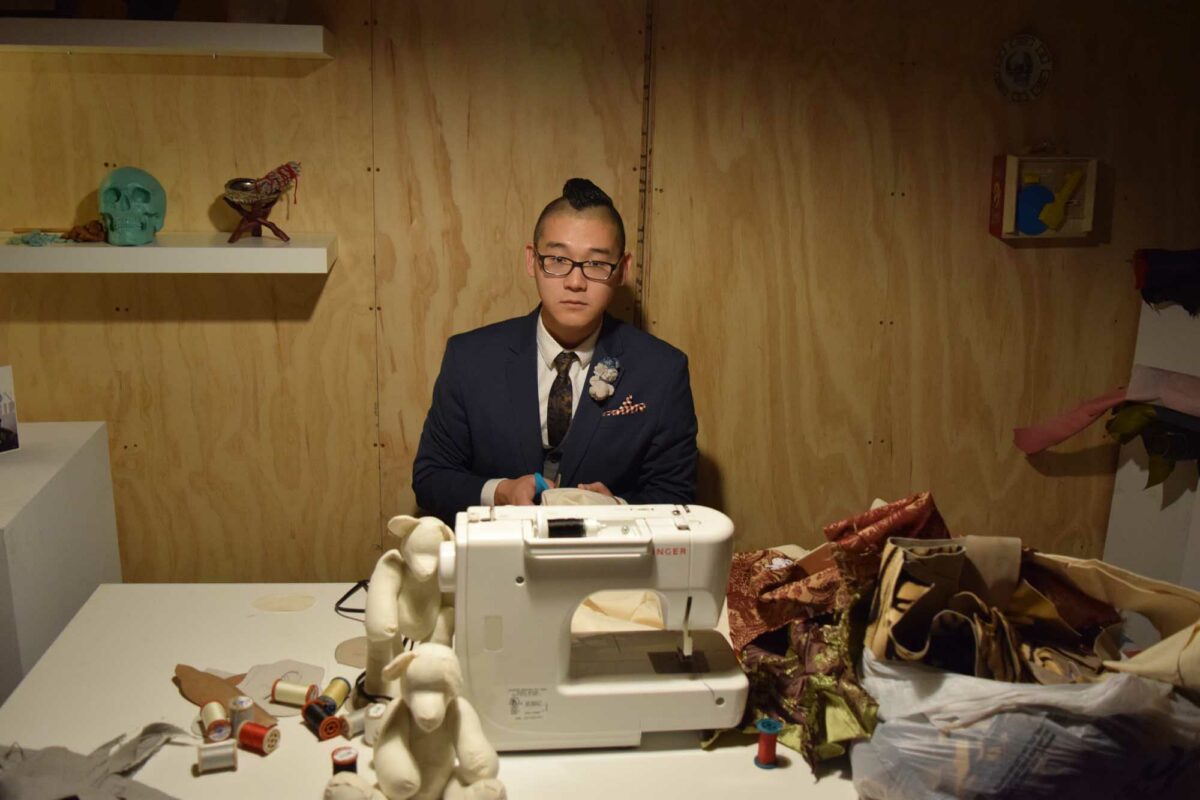 Chuck Hohng at work in his temporary workshop inside the Manhattan Beach Art Center. Photo

And what is it he’s doing?
“I just call it soft sculpture,” he says. “Essentially they are teddy bears, but they are stand-ins for the memory or the impressions of people, or experiences, that I’ve had.” In addition to serving as departures for memory they may also comment (socially, politically) on the human body and perhaps what constitutes a perfect human body. That is, by his altering the form of what we may think of as the “perfect” teddy bear we may realize that they can be different and yet still be acceptable–and the same with human beings.
His current series is titled “Domesticated.” The wall text says that it explores Hohng’s “new lifestyle as a live-in caretaker to the children of a nontraditional couple.”
Be that as it may.
Prior to his moving into a house in Glendale, Hohng says, “I would go to some fancy stores to buy my fabrics,” or he’d drop into “interior designer stores to just look at things for fun. Ever since I moved, Target was my saving grace, and also Ikea. And for the fabric choice, I just started going to Joann’s more often.”
Perhaps the bears have become different as a result of these life changes, yet still retaining an element of his personality or character as conveyed through an inanimate object. 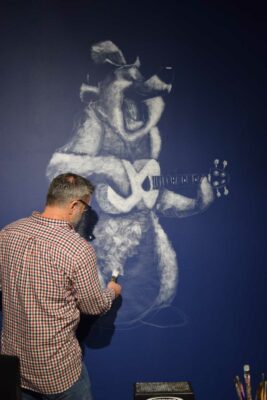 “Before,” Hohng explains, “they were more elongated.” The body ratio then was different, smaller heads, longer legs, and so on. “For this particular series I’m making it more accessible by shortening their arms so it almost looks like commercial bears, but not really.”
Well, it’s that “not really” that gives Hohng’s creations a certain style and flavor all their own. They’re faceless and featureless, a blank canvas for us to project our own interpretation of what these bears are saying when we stand in front of them. Again, teddy bears (like people) can come in all shapes, sizes, and colors.

A revelation in Florida
He was painting it before the doors opened last Friday, but John Quinn’s depiction of a guitar-playing bear was instantly reminiscent of the former Country Bear Jamboree at Disneyland. Well, that’s no coincidence.
Several people gathered around Quinn as he paused in his painting to talk about himself and his background.
In 1996 he was in New York teaching at the School of Visual Arts, and along with his students he submitted his portfolio in an attempt to get a job in animation. And one day, he told us, “I got a call from a woman in Burbank who said, Well, I know it’s a big move, but would you consider coming to California to work for the Disney Company?
“Are you kidding me?” he announced to his listeners as they laughed. He’d have walked all the way across the U.S. for that opportunity!
The offer was to work in consumer products, and Quinn figured that it was a foot in the door, and that within a year or two he’d make his way over to the animation department. “But very quickly I realized that the consumer production business offers so many different kinds of creative opportunities for an artist.”
He also realized that jobs in animation were cyclical. He might get in on a particular film, but then could be standing in the unemployment line when the project was completed. 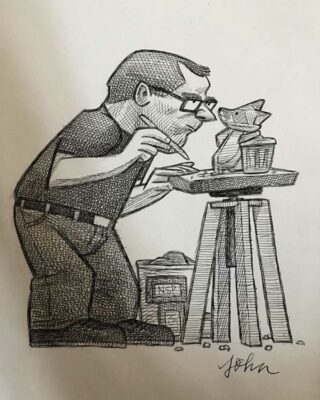 So Quinn works as a character designer, a storyteller, and an illustrator. And with new technologies he’s also beginning to create digitally in 3D.
“I was thrilled to participate,” he said, when the art center called and asked if he’d consent to be in the show. “And then they said, Well, since you’re coming, will you consider painting on the wall?” He paused. “So, I’m singing for my supper.”
As people laughed, he continued. “And I’m happy to do it. I didn’t know what to do and I thought, well, I’ll just paint a bear because I love bears.”
Which brings us full-circle to what we see when entering the gallery.
“One of my earliest influences was an artist named Marc Davis, the guy who designed the Country Bear Jamboree,” Quinn said, “which is no longer at Disneyland but it’s still down in Florida.”
When he was a kid, Quinn visited Disneyland and for a nickel each bought a few postcards outside the Country Bear Jamboree attraction. “At the time, I didn’t realize they were Marc Davis’s drawings,” his designs for the singing, banjo-playing bears. “And, to this day, I find those drawings so inspirational because to me they look like real bears, but each bear has a unique personality.” This, apart from the artistic beauty of the painting and drawing.”

Quinn points out that he enjoys going to Starbucks and sketching people, and there’s a nice roundup of his sketches adorning much of one wall, looking as if someone had come in and tacked up several dozen this way and that. “But if I’m doing illustrations I love to do animals, and I particularly love animals playing instruments.” A couple of models of just that are on view as well (along with papier-mâché sculptures of Abe Lincoln and George Washington).
“But,” he continued, “I really believe it all comes from being inspired by Marc Davis’s work. Marc Davis animated Cruella de Vil in “101 Dalmatians” (and) he animated Tinker Bell in “Peter Pan.” In the ‘60s, Walt Disney asked him to go over to WED (Walt’s initials, and his imagineering company) to help start to design attractions. He designed America Sings, Pirates of the Caribbean, the Haunted Mansion… He did all that stuff.”
Well, Quinn does a lot of stuff, too, and what he likes is the variety of the projects; he’s certainly not an assembly line kind of artist. “It’s never as glorious as getting your name in the credits of a film,” he said, referring to animators, but for me it’s been so satisfying over the last almost 22 years.”
As the Director of Character Art for the Disney Consumer Products Division, “Quinn is responsible for the look, feel, and translation of Disney animated characters from the big screen to tangible items one can take home and hold.” Look around, you may even have some of his “tangible items” in your own house. 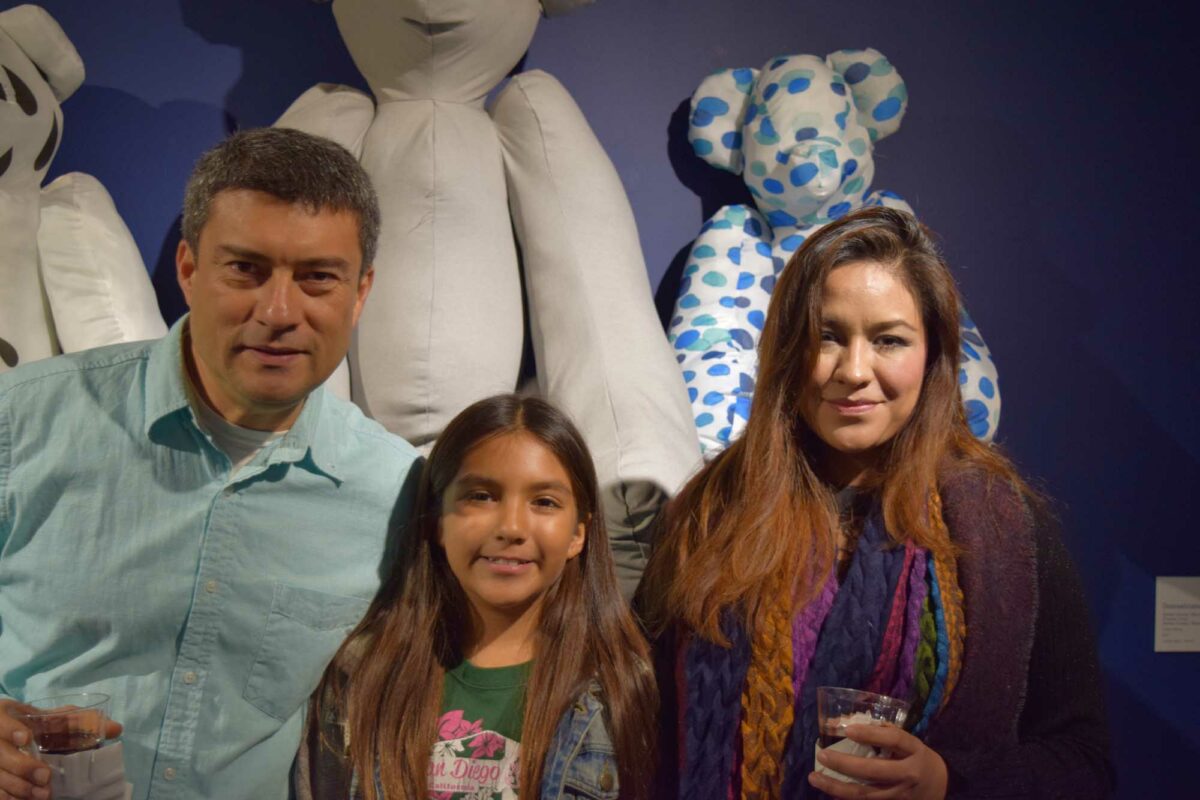 A concrete and mixed media black bear by Ross Bonfanti

The third artist in “Toyetic” is Ross Bonfanti, a Toronto-based sculptor who works mainly with concrete and mixed media. “Concreatures” is a series of what appear to be scuffed-up but rescued stuffed animals, the residue of an ancient childhood. But he’s fossilized them, so to speak, and transformed them into concrete sculptures. Not exactly something you’d like to cuddle up to or playfully toss across the room. So, what do they signify? Well, like Chuck Hohng’s work, that seems largely to be left up to us. At the very least, we’re provided with a new perspective on an item that had always seemed so familiar that we’d never given it a second thought. Now we’re invited to do just that.
Toyetic is on view through Sunday, April 1, at the Manhattan Beach Art Center, 1560 Manhattan Beach Blvd., M.B. Hours, Wednesday to Saturday from 10 a.m. to 9 p.m., and Sunday from 10 a.m. to 5 p.m. (310) 802-5440 or email infombac@citymb.info. ER