Better with time: in praise of Sloopy’s, a Manhattan Beach institution [RESTAURAUNT REVIEW]

Peter Nelson, Todd Marsh and Steve Truitt gather for a breakfast meeting that extends well past the lunch hour. Photos

Two decades after last visiting Sloopy’s, North Manhattan’s most inconspicuous institution, the food, service and atmosphere seemed better than ever.

As I think back on the establishments that I used to hang out at when I was in high school, a parade of long closed restaurants fills my head – the Criterion, Lococo’s, Fook Gin, and the Bay 90s are all history. The few places that have stood the test of time have changed radically – who would guess that The Kettle would someday serve prime rib and have an extensive wine list?

Then there’s Sloopy’s, which has the same ramshackle hippie hangout charm that it did when the idea of filling a restaurant with orchids was a new idea. The giant tree that used to tower over the place is gone (it dropped too much sap on those below), but some of the staghorn ferns on the wall are in their fourth decade and look like they’ll live long enough to collect social security. A fire still burns under the massive iron chimney that looks like something from a blacksmith’s forge, and the tables made from slabs of ancient trees welcome diners day and night.

I hadn’t visited Sloopy’s in at least a decade when I dropped in for breakfast last week, and I had to marvel at how much it felt like I had walked into a time warp. That feeling was enhanced by a long-outdated menu that still hangs on the wall – our server warned us that the prices and selections are long obsolete, and we couldn’t order from it. There were some modern items on the real menu like breakfast tacos, but the emphasis on health-oriented ways to start the day was still apparent. I decided to start the day with a breakfast burrito, while my companion opted for pancakes with fruit. The breakfast burrito was in a spinach tortilla rather than the standard flour, which I liked. I usually prefer whole wheat to either, but have to admit that the pastel green burrito next to the strawberries looked quite festive. The burrito was a simple thing well made: bacon, cheese, and eggs with a pico de gallo that gave just a hint of spiciness. With crisp hash browns on the side, it was a filling breakfast that carried me through to dinnertime.

My companion’s pancakes were light and fluffy, but bereft of the usual accompaniments of bacon or sausage, and the menu doesn’t offer sides of these items. It turned out they are available if you ask the server, but for some mysterious reason are not listed.

Breakfast and the chance to relax over coffee on that pleasant patio was so enjoyable that I returned for dinner with my wife, who had never been to Sloopy’s despite living in town over 20 years. We had a little trouble figuring out what to order because there were no starters on the menu; we usually like to try some small plates to sample the range of the kitchen. We decided to begin by splitting a quinoa and avocado salad, intrigued by our server’s comment that the quinoa in this case was served raw. It hadn’t occurred to me that you could eat quinoa raw. I’m used to the Inca grain cooked to fluffy softness. What arrived was a large plate of greens topped with half a sliced avocado and a large pile of quinoa, the grains much smaller than I was used to seeing. The quinoa had been soaked in water overnight, which gave it the texture of sesame seeds and an intensely nutlike flavor that went very well with the homemade balsamic dressing. This salad is a very good starter for two or a healthy meal for one, balanced in both flavor and dietary values.

I had planned on getting a seafood risotto (which I’m sure wasn’t on the menu when I was in high school, not that I would have known what one was), but our server informed me that it wasn’t available that evening. Instead we selected a ham and cheese stuffed chicken breast in chipotle sauce and a crabcake dinner. My wife and I are both picky about crabcakes and were surprised that the ones here are made withMarylandlump crab, which is the finest you can get. Given that they were priced at only $13, surely they’d be tiny commercially made things, probably mostly filler. We were surprised when two big housemade crabcakes showed up atop a mound of mashed potatoes with a cabbage salad on the side – the portion was considerable, and the briny flavor of realMarylandcrab was there. They were good, with or without the roasted pepper sauce that was offered on the side. The cabbage salad wasn’t the usual cole slaw, but an Asian-influenced version that seemed to have some sesame flavor somewhere in the mix.

The stuffed chicken breast was an impressive looking plate too – so much so that a person at the next table said “Whatever that is, I’m ordering it next time.” The chicken had been pounded thin and stuffed with prosciutto, provolone cheese, roasted red pepper and mushrooms, and topped with a mild chipotle sauce, and it was served with a colorful mix of stir-fried Asian vegetables. It was an ambitious preparation and completely successful, particularly because it was priced the same as the crabcakes. This dinner usually comes with roasted potatoes, but I had asked for onion rings instead – it was a slight extra charge but worth it because these onion rings are really good.

My wife wasn’t in a mood for alcohol and decided to have a mocha shake with dinner, which I found odd, but she justified it as ‘Life is short – eat dessert first’. It wasn’t what I would have picked but it was good, a slushy, creamy coffee confection. I had a glass of Willamette Pinot Noir instead, a bit pricey at $14, but a very nice wine that complemented both dishes. It’s worth noting that the wine list on the main menu only has their less expensive and lower quality house wines – the premium wines are worth the additional price. 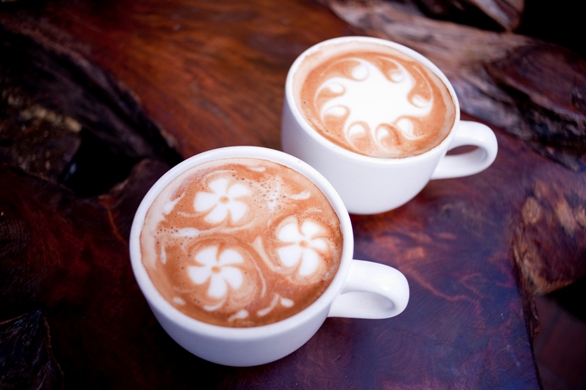 We considered desserts but found that all were from a commercial baker whose products I was familiar with; unfortunate, because there is obviously some talent in this kitchen and I’d like to see what they could come up with to finish the meal. Our dinner check for two with two glasses of wine was $81, reasonable for such a good dinner in pretty surroundings.

Sloopy’s is a gem that is part of South Bay dining history, a cozy hideaway that has aged very well. The service is friendly, the food is fresh and healthy, and there’s nothing in the area like it.